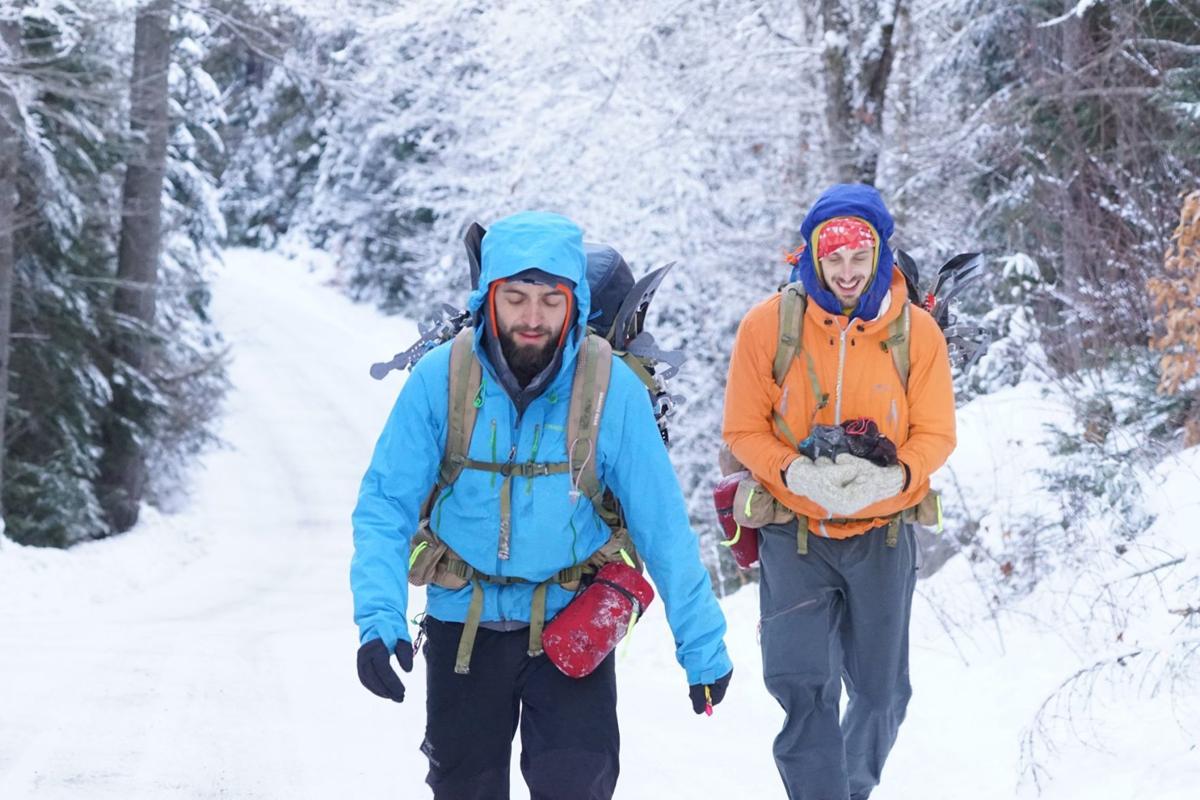 Mike Jaworski of Greenwich and Nick Glasser of New Jersey hike in through the High Peaks region earlier this month. The pair completed a winter thru-hike of all 46 High Peaks across nine days. They are believed to be the only pair to complete the feat. 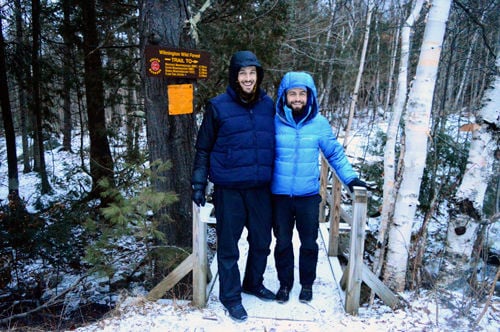 Nick Glasser, left, and Mike Jaworski ended their supported thru-hike of the 46 High Peaks Monday at the Esther Mountain trailhead in Wilmington. 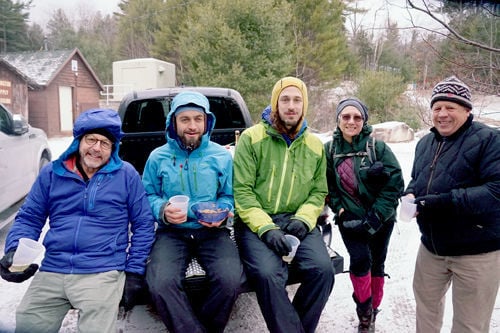 WILMINGTON — Mike Jaworski and Nick Glasser sat on a tailgate drinking champagne and eating prosciutto. They had 46 reasons to celebrate.

Thirty minutes earlier, they had wearily hoofed it off the Esther Mountain trailhead. A few hours before that, they had become 46ers on the summits of Whiteface and Esther, respectively, and nine days and nine hours earlier they started their journey to thru-hike all 46 High Peaks.

“It was tough and exhausting, but I think you can quickly forget some of the most painful parts,” Glasser said. “It gives you a good appreciation for civilization and life.”

“How easy life is,” Jaworski added. “This was scary.”

Asked if he would do it again, Glasser said, “I hope not. But you never know, because you forget the pain, right?”

Jaworski plans to do the thru-hike again in the summer with his cousins.

They said they hiked with no vehicle assistance, bushwhacking through the wilderness from one mountain range to the next. A support team of family and friends assisted them in the trip, leaving care packages along the route, breaking trail on some stretches and fixing them home-cooked meals on four of the nights.

Glasser, 33, and Jaworski, 29, spent six nights in hammocks and lean-tos and four nights back at an Airbnb. They got rides to and from the rental cabin, but walked the entire distance between mountains.

“We certainly got tons of help,” Glasser said.

Glasser’s dad Seth, Mike’s mom Sue and their hiking buddy from work, Lou Silver, were part of the team that made their trip enjoyable, they said.

“I wanted to do it supported,” Glasser said. “Why would you not want a beautiful bowl of pasta that Lou Silver’s going to make you? … You don’t have to do it, so why make it more difficult than you have to be? It’s already plenty difficult.”

Still, they spent many grueling miles alone in the backcountry, “swimming” through chest-high snow, crossing rivers swelling with rainwater and maneuvering down ice-sheet cliffs.

Among those gathered for the finish, there were several ideas as to why the two undertook this challenge.

“They have a mental affliction,” Silver said.

“They both got dropped on their heads,” Seth Glasser, Nick’s dad, offered.

“Because no one’s done it,” Mike Jaworski said.

“I always come up with these stupid ideas,” Nick Glasser said, “and then Mike remembers them, I guess, and brings them back up.”

Nick had come up with the idea, and when Mike’s cousins said they wanted to thru-hike the High Peaks, he said he’d test it out.

They planned for weeks, calling each other around five times a day to discuss it, to the point where they said it may have worried Mike’s wife, Nick’s fiancee and their co-workers.

They planned the trip to coincide with the full moon, enjoying good visibility while they hiked Haystack Mountain by moonlight.

They hadn’t planned it to also coincide with deep snow and rain.

First of its kind?

While many people have thru-hiked the High Peaks, few, if any, have done so in the winter … at least publicly.

“We have a feeling that maybe somebody has done it and they are humble enough to keep their mouth shut,” Nick said.

Jan Wellford, a record-setting 46er thru-hiker, said he had never heard of a supported winter thru-hike before and was impressed with Nick and Mike’s time.

“I’m willing to go out on a limb and say that’s never been done,” Wellford said.

“The coldness puts you in a mindset where you’re just always having to attack and focus,” Nick said. “It can be nice.”

Still, it is also dangerous.

“You have to be very diligent about every step you take; otherwise you’re going to start shivering and be useless and get hypothermia,” Mike said.

Snow accumulated at around 5 inches per day at first, they said. In snowshoes they sunk to their knees and chests, using their hands to cut out ledges and climb upward.

“It was frickin’ brutal on some of the snow drifts,” Mike said.

The last few days of warm temperatures rain were worse, though.

Nick said walking the whole region gave him a greater understanding of space, the Earth and himself.

Mike runs a manufacturing facility in Greenwich, and Nick is a carpenter in Nyack, on the New Jersey line.

He said he took stock of his life on this trip and returned feeling “reset” and less high-strung about the everyday stresses in life.

Dangers on the trail

The two said the summits of Marcy, Algonquin and Haystack were precarious with high winds. Nick got knocked over by the wind on Algonquin.

“We had supply drops in the woods that we had to get to or we had no food,” Mike said. “We had to get there. It forces you to do these really dangerous, idiotic things like going over Haystack with 60-mile-an-hour winds.”

Each carried a 20-pound pack.

The hardest day, they said, was the day they tackled Dial, Nippletop, Colvin, Blake and the Dix Range, nine peaks in all.

On the Great Range, Nick said he was feeling stomach issues he could not figure out, until he realized, “Oh, it’s hunger pangs. I’m not eating enough food.”

Early on, Nick said he had wanted to quit, but Mike reminded him that Seth Glasser’s high school friend Henry Kassell was driving up from North Carolina on the third day. Nick made it until then, and kept going.

Mike said they kept each other’s spirits high with “lots of shenanigans.”

Both started the trip only two or three mountains shy of all 46 peaks. Nick had worked on them for 12 years and Mike for five. Then they did them all in under 10 days.

“I feel like everybody has this idea that you need to go far to do an adventure or a trip,” Nick said.

He said they like finding adventures in their home state.

“I did come up with another stupid idea,” he added.

“I know I’m not fast enough to beat anybody’s time, so I’ll choose things that people haven’t done,” he said.

For now, though, Mike Jaworski and Nick Glasser said they want to see someone shatter their time of 225 hours thru-hiking the High Peaks in the winter.

Silver chronicled the two hiker’s travels on his Facebook page “Louis R. Silver” with photos, maps and journals from the support team’s point of view.

Mike Jaworski of Greenwich and Nick Glasser of New Jersey hike in through the High Peaks region earlier this month. The pair completed a winter thru-hike of all 46 High Peaks across nine days. They are believed to be the only pair to complete the feat.

Nick Glasser, left, and Mike Jaworski ended their supported thru-hike of the 46 High Peaks Monday at the Esther Mountain trailhead in Wilmington.