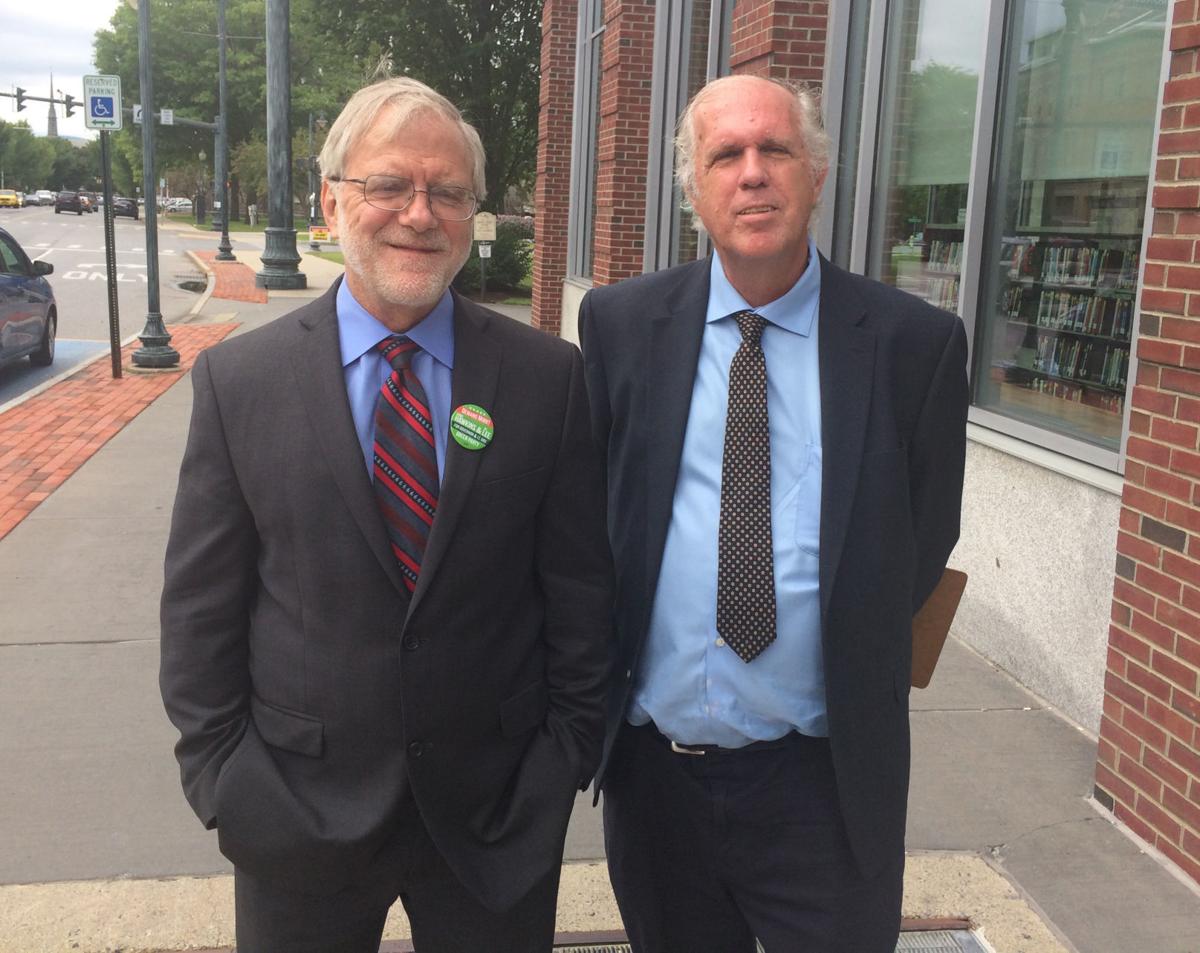 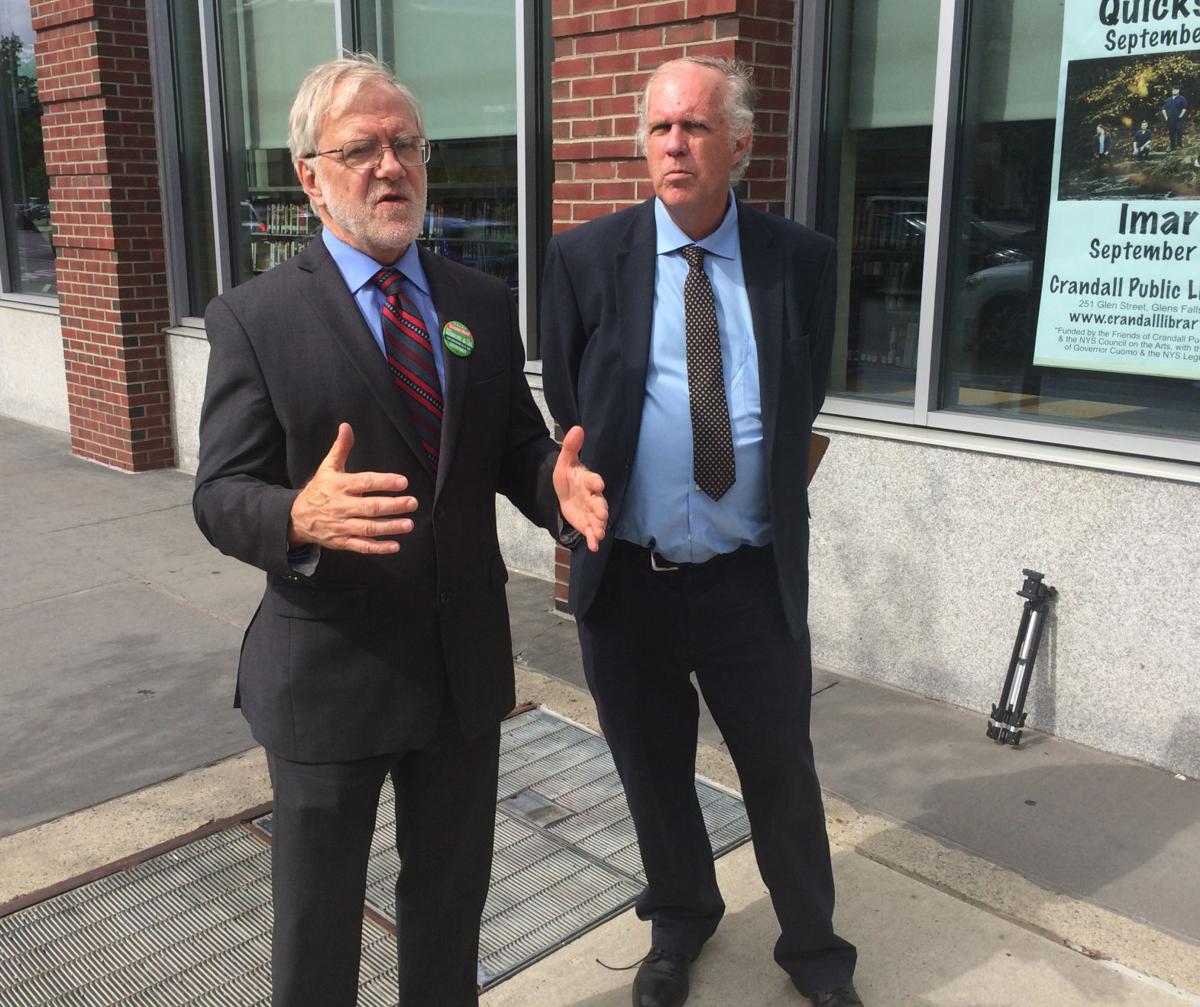 GLENS FALLS — Green Party gubernatorial candidate Howie Hawkins said Thursday that he did not hear a lot about the needs of upstate residents during Wednesday’s Democratic debate between Gov. Andrew Cuomo and primary challenger Cynthia Nixon.

Hawkins said the two candidates seemed to spend a lot of time sniping at each other and avoiding the economic issues that people are talking to him about. They face rising property taxes and rising costs for their health care and food, he said.

“I can’t pay my bills. Wages have been stagnant,” he said, talking to reporters during a campaign stop outside Crandall Public Library.

Hawkins, who also ran for governor in 2010 and 2014, is pitching a “Green New Deal,” to switch the state to 100 percent energy from renewable sources by 2030. He said that is a more aggressive timetable than Cuomo and other candidates have put forward.

“That creates hundreds of thousands of good-paying jobs in manufacturing and construction,” he said.

Hawkins also supports single-payer health care, funded through a payroll tax on employers and employees. He believes the state could run the program more efficiently than private insurers.

Hawkins proposes to have the state fully fund Medicaid to lessen the burden on the counties and restore to 8 percent the amount of revenue it shares with municipal governments.

“We’re balancing the state budget on the backs of local property taxpayers,” he said.

Hawkins said the state should give school districts an additional $4 billion, which is how much education advocates say they have been underfunded. He also would also like to go a step beyond the Excelsior program and provide free tuition for SUNY and CUNY students.

He is proposing to pay for some of these programs by increasing taxes on the wealthiest New Yorkers. He would increase the number of income tax brackets and lower the lowest tax bracket from 4 percent to 2 percent.

He is also proposing a windfall profits tax on companies that reaped benefits from the federal tax cuts, unless they increase employee wages and recapture the money on the stock transfer tax that the state gives back to Wall Street. He believes these initiatives and other tax changes would generate an additional $30 billion annually.

Another big issue is rent affordability, according to Hawkins. He said the government should increase the amount of public housing. He wants to increase the minimum wage to $20 per hour by 2020.

Hawkins said the Cuomo-Nixon debate was scheduled during a low visibility time in late summer when a lot of people are on vacation, which he believes is part of Cuomo’s strategy.

Hawkins believes the large field of candidates could hurt Cuomo and create an opening. Even if she loses the Democratic primary, Cynthia Nixon will be on the ballot under the Working Families Party line.

Also on the ballot for governor this November is Libertarian candidate Larry Sharpe, independent candidate Stephanie Miner and Jimmy McMillan of the Rent Too Damn High party.

Hawkins was campaigning in the area with comptroller candidate Mark Dunlea, who was the executive director of the Hunger Action Network of New York State for 28 years. He said he quit that position because he wanted to focus on climate change.

“I was very concerned we were losing the fight on climate change, which I think is the greatest threat to humanity,” he said.

Dunlea worked with a group called 350.org in a successful effort to get New York City to divest its funds in fossil fuel companies from its pension plan. Dunlea wants to expand that to a statewide effort.

He has tried to get state Comptroller Thomas DiNapoli to accomplish divestment on a state level, but has been unsuccessful in getting those discussions going.

“I’ll just run against you,” Dunlea said he decided.

Dunlea also supports the Green jobs plan and universal health care. He has served as a Poestenkill Town Board member in Rensselaer County, where he said he was able to cut taxes every year.

The two candidates stopped in Glens Falls on their way to an evening event in Athol, which was organized by Green Party member Steve Ruzbacki, who was running for the state Senate District 45 seat. He was thrown off the ballot, however, because he submitted photocopies of his election petitions instead of providing original copies.

Howie Hawkins wants to get what he calls life and death issues injected into the 2020 presidential campaign discourse: the climate emergency, the inequality crisis and the nuclear arms race.