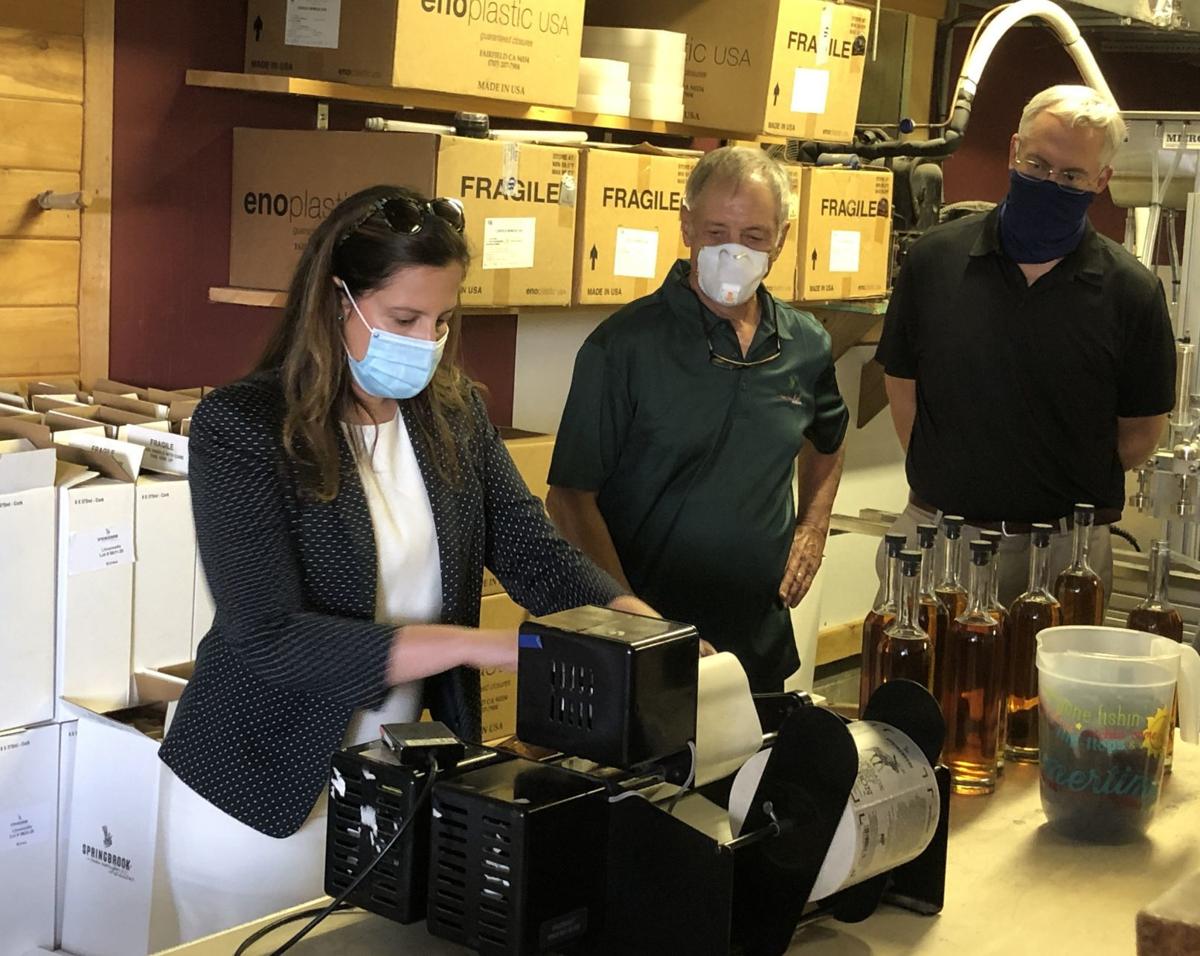 U.S. Rep. Elise Stefanik, R-Schuylerville, places a label on a bottle during a tour of Springbrook Hollow Farm Distillery in Queensbury on Tuesday. Looking on are Chief Fiscal Officer David Bannon and Assemblyman Dan Stec, R-Queensbury. 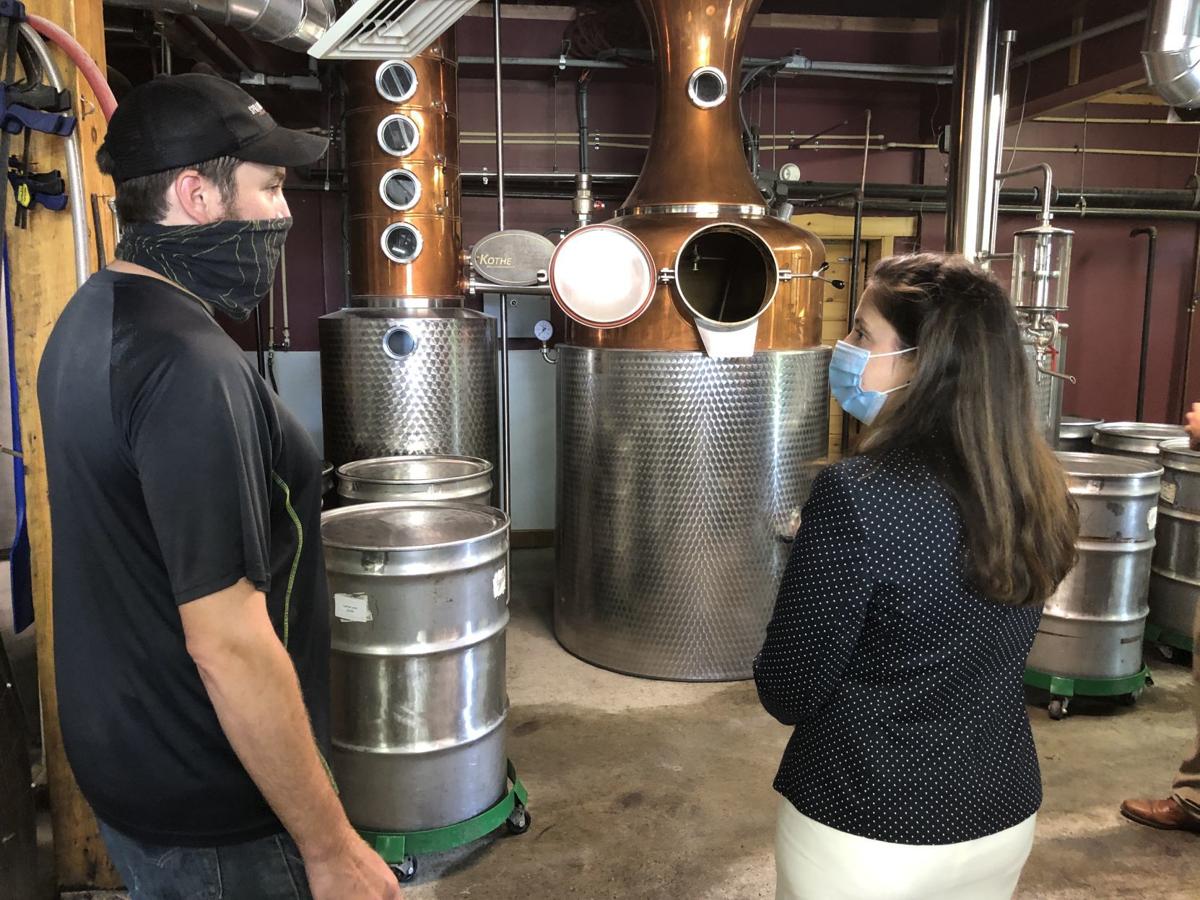 Jeff Koehler, master distiller for Springbrook Hollow Farm Distillery, talks to U.S. Rep. Elise Stefanik, R-Schuylerville, about the process to make the spirits during a tour on Tuesday.

QUEENSBURY — Springbrook Hollow Farm Distillery officials say they are doing pretty well, despite the COVID-19 pandemic, as sales of their products at local farmers markets have boosted business.

General Manager Matt Colucci said farmers markets have made up for some of the business lost when bars and restaurants were closed because of the coronavirus pandemic.

The company, which opened in 2015 at 133 Clements Road in a converted barn, is growing so rapidly it needs more room to expand.

“We’re out of space here,” Colucci said on Tuesday to U.S. Rep. Elise Stefanik, R-Schuylerville, who was touring the business.

Colucci said the distillery recently bought a 4.2-acre property at the corner of Clements Road and Route 149 and has begun the permitting process with the Adirondack Park Agency.

The company has plans to construct a 6,000-square-foot taproom there.

Their products are sold in more than 600 locations in four states — New York, New Jersey, Vermont and Connecticut. They are distributed in the Capital Region by DeCrescente Distributing Co. and downstate by Tri-Vin Imports.

During the pandemic shutdown, the business began making hand sanitizer.

The distillery distributed some of the bottles for free to residents and sold the rest to companies, such as National Grid, International Paper and Tesla, according to Colucci.

At one point, he said the business was running two shifts to produce hand sanitizer.

Stefanik said she was impressed with the company’s effort to adapt.

“It’s amazing to see businesses really pivot on a dime to help the community,” Stefanik said.

Springbrook Hollow Farm Distillery has hosted events, such as weddings, on its 200-acre property, which is actually located in three different communities — Queensbury, Lake George and Fort Ann.

There is a tasting room on the property, and business is coming back slowly, according to company officials.

“You could barely compete when the old federal tax was so high,” he said.

Stefanik said she pushed for provisions to benefit the craft beverage industry during her first term and is working on legislation to renew them.

Colucci said he wished the state alcohol taxes were not based on percentage of alcohol. A bottle of wine has about 12% alcohol compared with 30% or 40% for hard liquor.

“It’s taxed five times more than a bottle of wine because of the alcohol percentage in the bottle,” he said.

Stefanik expressed the hope that the issue could be addressed at the state level.

“This really was a small business when they started,” Little said. “I’m excited to see how successful they’ve been.”

Following the tour, Stefanik talked about what would be included in the next coronavirus aid package. Congress is going back into session next week.

Aid to state and local governments, which have experienced declines in revenue because of the virus, is high on the priority list. Stefanik has sponsored the SMART Act, which would provide $500 billion in aid to states, counties and smaller municipalities.

Stefanik said school districts are also going to need financial help as they get ready for reopening.

In addition, Stefanik said she wants to provide incentives, such as bonuses, for people who return to work. The hospitality industry has expressed concern about people not coming back but preferring to collect unemployment with the extra $600 a week, which, in some cases can add up to more than they would earn in regular salary.

Springbrook Hollow Farm Distillery in Queensbury is planning to construct a bigger building on its property to house a taproom.

U.S. Rep. Elise Stefanik, R-Schuylerville, places a label on a bottle during a tour of Springbrook Hollow Farm Distillery in Queensbury on Tuesday. Looking on are Chief Fiscal Officer David Bannon and Assemblyman Dan Stec, R-Queensbury.

Jeff Koehler, master distiller for Springbrook Hollow Farm Distillery, talks to U.S. Rep. Elise Stefanik, R-Schuylerville, about the process to make the spirits during a tour on Tuesday.