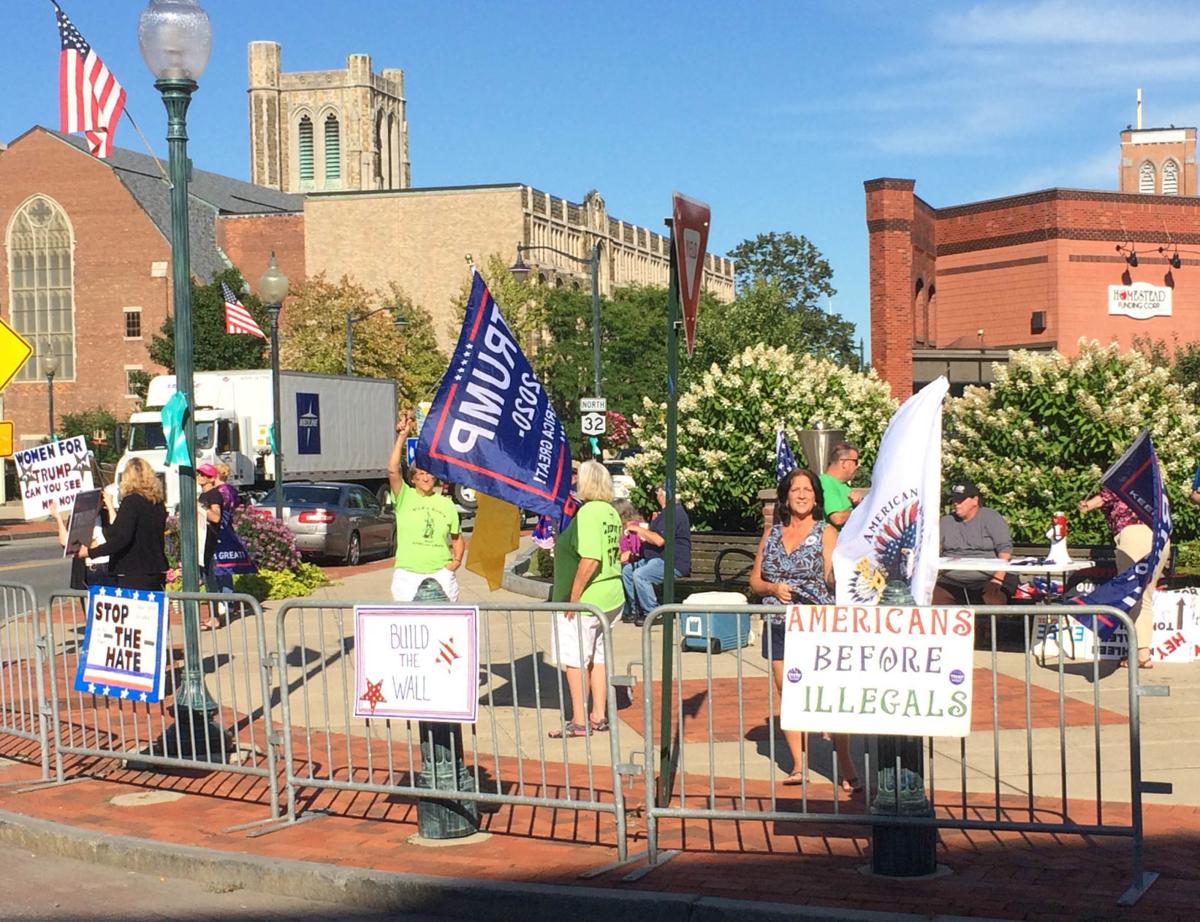 Marchers participate in a Women for Trump rally on Thursday at Centennial Circle in September. The city has begun putting up metal barricades to keep crowds of protesters from getting into the circle, where five streets converge. 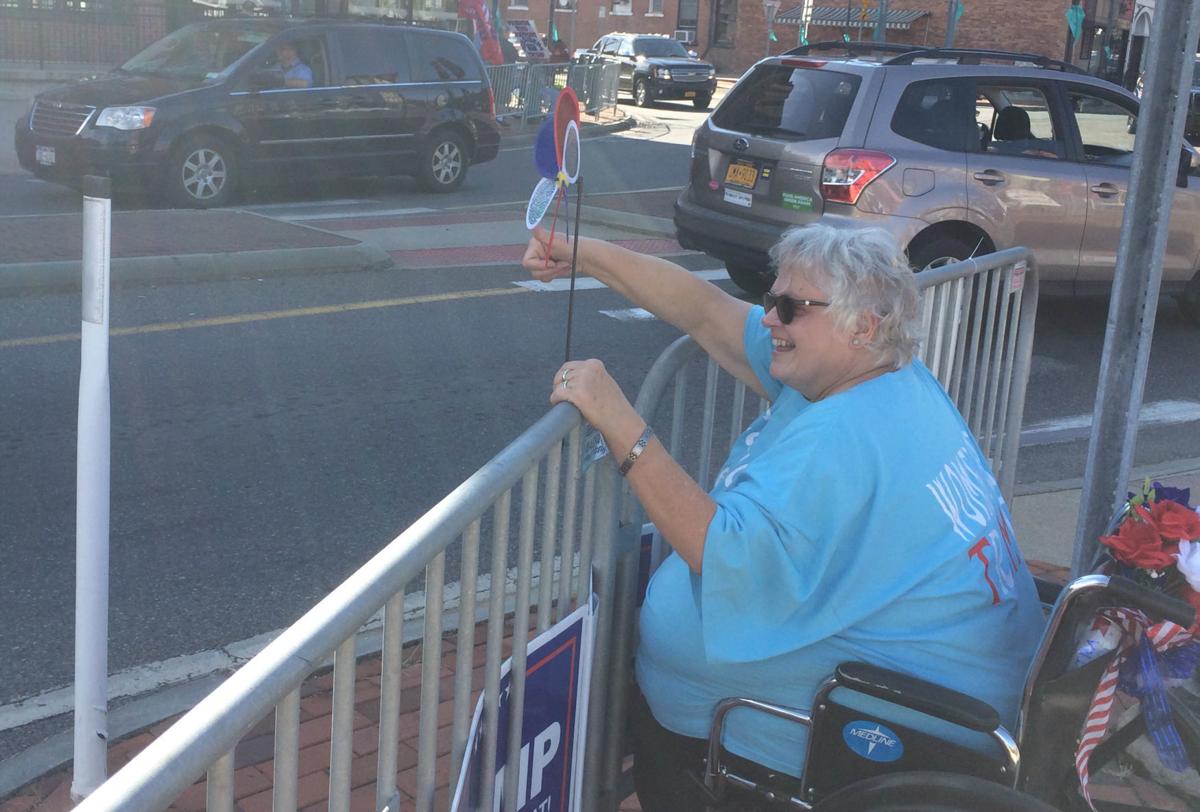 Trump supporter Lorraine Whalen of Ballston Spa encourages drivers to honk their horns to support the president during a rally last Thursday. 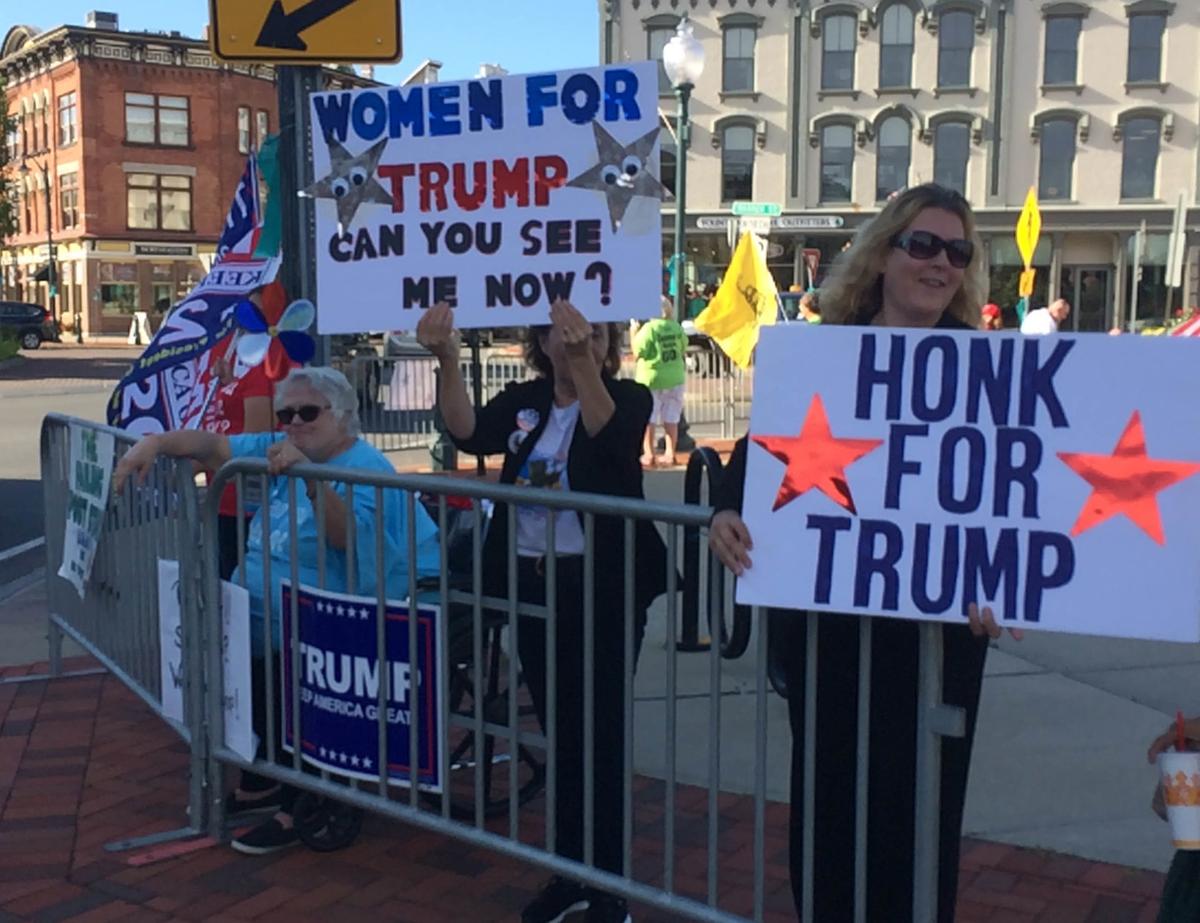 Trump supporters Lorraine Whalen of Ballston Spa, Nancy Barot of Glens Falls, and Tammy Thomas of Lake George participate in a rally in Centennial Circle Thursday Sept. 5. For public safety, the city has begun putting up barricades to prevent people from going into the circle.

The city has decided to put up metal barricades to keep downtown protesters from going into Centennial Circle.

“Keep people out of the circle. It’s all about safety,” said Mayor Dan Hall.

The barricades made their debut at last Thursday’s Women for Trump rally. Nearly 20 women attended.

As the number of protests downtown has grown, city officials have been exploring ways to make sure they do not get out of hand. A permitting system has been discussed, but the idea has not been well received by the various advocacy groups. Hall said the discussions are ongoing.

“We’re trying to wait and see how the next demonstration goes,” he said.

“They’ve all said they’re going to act civil, so we’ll give them a chance,” Hall added.

The next demonstration is set for Sept. 13. Saratoga Progressive Action is organizing a local Defund Hate event, which will begin at 4:30 p.m. at City Park. Then, the group will march to Centennial Circle near the office of U.S. Rep. Elise Stefanik, R-Schuylerville, and call on her and Congress to decrease or eliminate funding for the Immigrations and Custom Enforcement and Customs and Border Protection departments.

These events are part of the national Indivisible movement, which is focused on protecting the immigrant community and eliminating these agencies.

The event concludes a Week of Action designed to coincide with members of Congress returning from summer recess.

The Democratic Congressional Campaign Committee issued a news release on Friday, stating that Stefanik is heading back to Washington with a “dark cloud of negative local press and constituent protests on her heels.”

The release references local editorials and news stories that Stefanik did not host any town halls this summer to hear from constituents and has only hosted one in 2019, which is the worst record of all upstate Republicans.

She also has been criticized for “attacking her opponents, name-calling, and dodging the press.”

It remains to be seen whether the DCCC will put any national resources into the NY-21 Congressional District and help Democratic challenger Tedra Cobb.

Cobb did not get support from national party officials in her 2018 bid.

Even though the state moved up its state primary from September to June so it could coincide with the federal primary, there could still be two federal primaries again next year.

The presidential primary has been set for April 28.

Gov. Andrew Cuomo is calling for the state and federal primaries to be moved to that date, because he believes having two primaries within two months of each other is an obstacle to voter participation, according to a news release from his office.

If the primary was moved, it means people running for state office would have to submit petitions even earlier.

GLENS FALLS — The attorney for the six people arrested last month for refusing to leave the Glens Falls office of U.S. Rep. Elise Stefanik is …

Last month during a protest outside Rep. Elise Stefanik's office in downtown Glens Falls, six of the protesters entered her office and demanded to speak to the congresswoman by phone or Skpye. They were told the office was immediately closing and that the police had been called which led to the arrest of the Glens Falls 6.

The official calendar for the House of Represenatives sets aside July 29 to Sept. 6 for all members to be on "District Work Period Time" so they can meet with constituents. Unfortunately, Rep. Elise Stefanik has yet to schedule a town hall this month.

Both sides: Don't require a protest permit in Glens Falls

Both liberals and conservatives say they oppose a proposal by Glens Falls officials to require permits to stage protests and rallies in the city.

Politicians must get started now, due to primary date change

Politicians who were only elected a year ago must decide — right now — whether they are running for office.

A former chief of staff to state Sen. Daphne Jordan, R-Halfmoon, has filed a complaint against her, alleging that he was forced to dress up as…

Marchers participate in a Women for Trump rally on Thursday at Centennial Circle in September. The city has begun putting up metal barricades to keep crowds of protesters from getting into the circle, where five streets converge.

Trump supporter Lorraine Whalen of Ballston Spa encourages drivers to honk their horns to support the president during a rally last Thursday.

Trump supporters Lorraine Whalen of Ballston Spa, Nancy Barot of Glens Falls, and Tammy Thomas of Lake George participate in a rally in Centennial Circle Thursday Sept. 5. For public safety, the city has begun putting up barricades to prevent people from going into the circle.