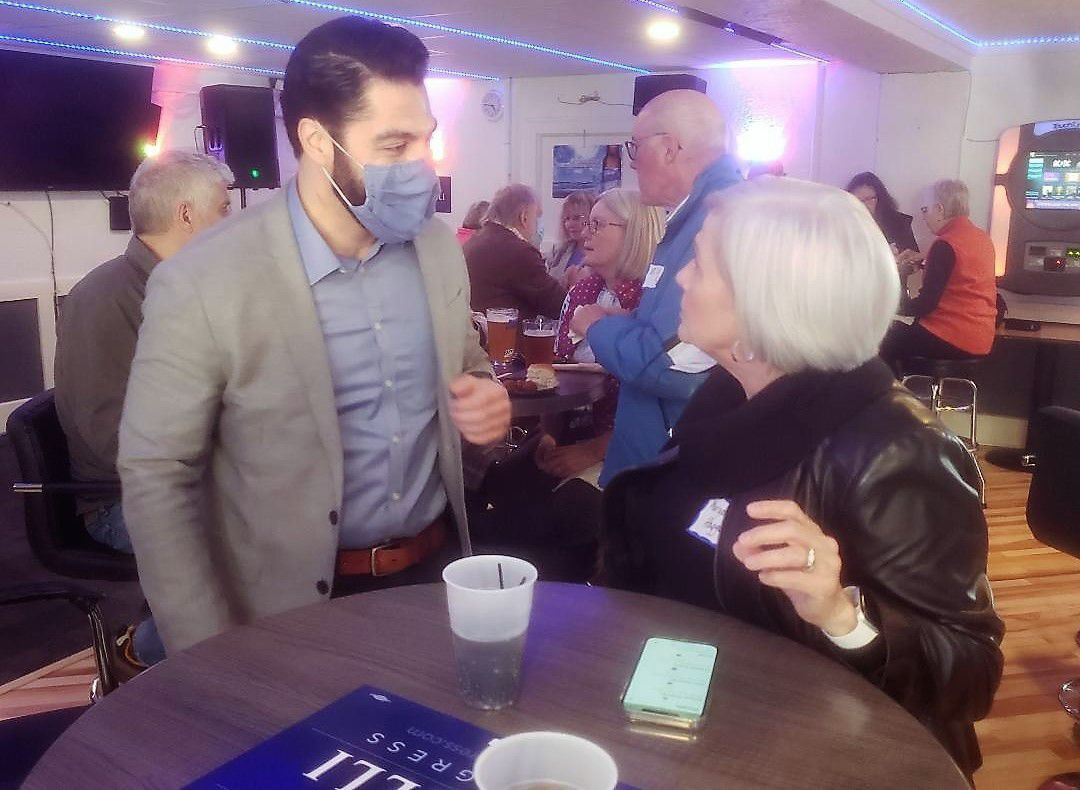 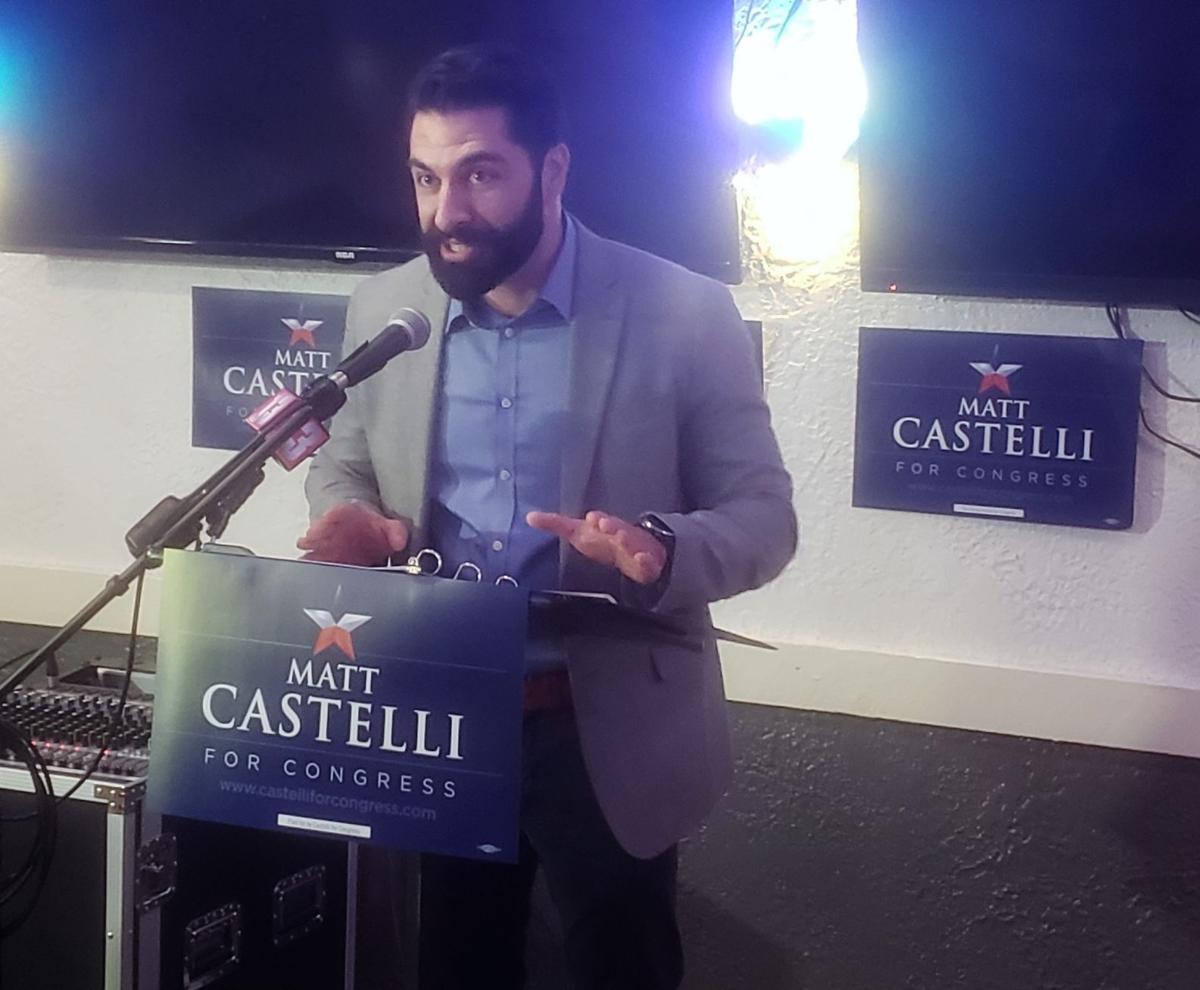 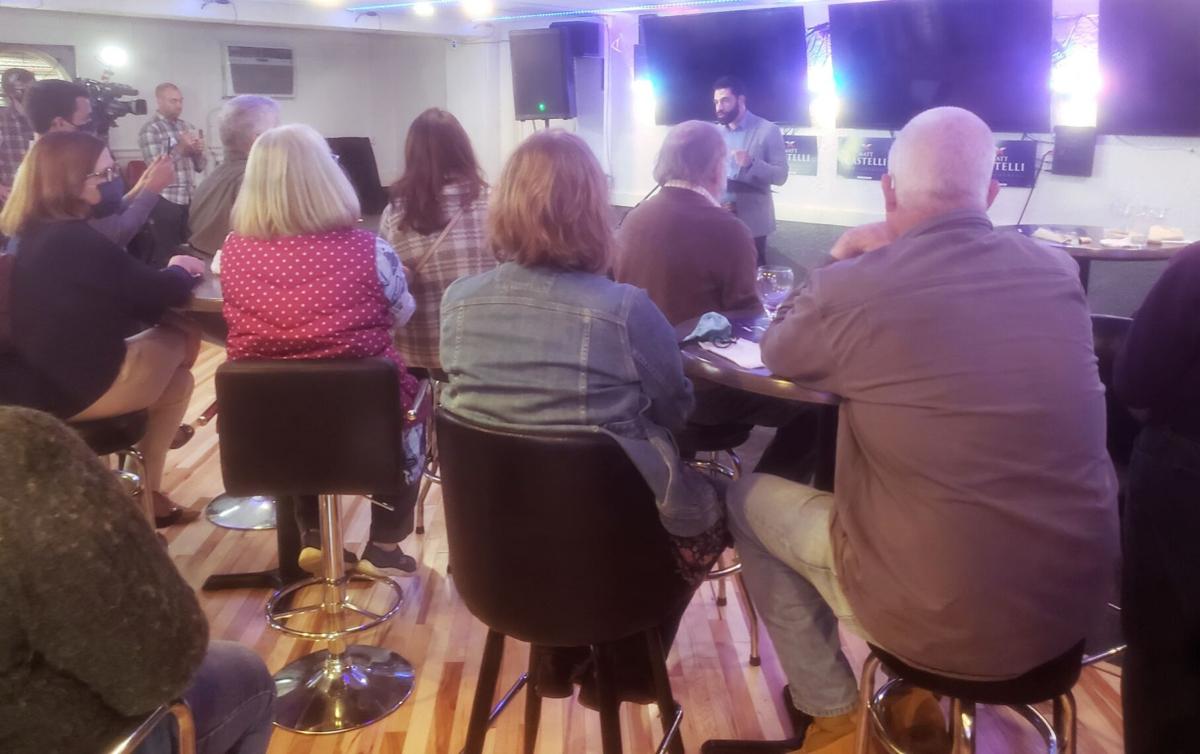 GLENS FALLS — Democrat Matt Castelli officially kicked off his candidacy to unseat Republican U.S. Rep. Elise Stefanik, claiming that she is out of touch with the district she represents.

Castelli, a former CIA counterterrorism officer, cited the Jan. 6 Capitol riot as a seminal event that prompted him to run for Congress. His niece was watching the events on TV and asked her mother what was going on. She said that bad people were hurting good people in Washington D.C.

“What happened on Jan. 6 is not OK and our kids were watching. Our kids are still watching. They’re watching to see how we protect them — not just from violent extremism and crime in our communities, but protect them from the uncertain of whether mom and dad are going to have a steady job to provide for their families,” he said at event attended by about 50 people at the Lawrence Street Tavern.

Castelli said his name means castle in Italian and it is apt because he has spent his career working for the CIA, helping to track down terrorists such as Osama bin Laden.

Castelli said everything has gotten too political. He is from a bipartisan family. His mother was a teacher and his grandfather was a doctor who served in the Army. They were both Republicans. His father was a Democrat and the youngest of a large family that emigrated from Italy.

People need to come together around common ideals.

After he left the CIA, Castelli went to work for a nonprofit that helps veterans access health care.

Castelli criticized Stefanik for voting against the bipartisan infrastructure bill, which would deliver critical funding to the region.

“She has turned away from this community and this country when we need her most,” he said.

Castelli said the community cannot trust Stefanik. She puts her interests above the needs of her constituents and if you disagree with your positions, you are attacked as being un-American.

“I don’t see the values of our community and country represented in Elise Stefanik,” he said.

Castelli said government is not the answer to all problems, but it is a powerful tool that can help tackle important problems like creating good jobs, providing quality health care and tackling climate change.

If people put country before party, Castelli said residents can put a stop to Stefanik’s extremism and deliver results to the district.

Many of the local Democratic officials were on hand for the announcement including Glens Falls 3rd Ward Supervisor Claudia Braymer, who introduced Castelli.

She said she hoped that the voters could flip the district from red to blue and defeat Stefanik, who Braymer said plays politics and has forgotten about the people she represents.

Warren County Democratic Committee Chairwoman Lynne Boecher said she attended the event because she has been getting a lot of calls from local Democrats wanting to learn more about Castelli.

He is a very strong candidate, according to Boecher.

“He entered (the race) and earned a quarter-of-a-million dollars in three weeks,” she said.

Castelli brought in about $275,000, according to the latest Federal Election Commission report. That topped the rest of the other Democratic candidates, which include Matthew Putorti, of Whitehall; Brigid “Bridie” Farrell, of North River; and Ezra Watson, of Wilton.

Keith Sherrill, of Sackets Harbor, filed paperwork to join the race on Sept. 24, but has not filed any fundraising documents.

Stefanik had raised $1.14 million and had $2.63 million on hand. Lonny Koons, of Carthage, is seeking to challenge her in the GOP primary. He has raised a couple thousand dollars.

Boecher said Castelli’s experience and patriotism allows him to compete with Stefanik on the issue of national security.

Stefanik has become completely partisan, according to Boecher. “Any semblance that she is bipartisan is gone,” she said.

Margaret Haggard, a member of the St. Lawrence County Board of Legislators, agreed that Stefanik has transformed into a rabid partisan.

“She seems to have gone to the dark side and touting the Big Lie (of a stolen election),” she said.

“I think she’s forgotten who she represents,” she added.

Haggard liked Castelli’s education and experience and believes he would appeal to Democrats, Republicans and independents all across the North Country.

“We’re not extreme liberals. We want people to have good jobs and opportunities,” she said.

Washington County Democratic Committee Chairman Alan Stern said he hoped that the Democrats could avoid a protracted primary process like in 2018 and coalesce around a candidate. That candidate has to focus on issues that are important to North Country voters such as poverty and economic development.

And importantly, Stern said the Democratic candidate must be able to withstand the kind of negative campaigning that Stefanik for which Stefanik has become known.

Diane Collins, of Glens Falls, said the results of the Virginia elections in which the Republicans swept the top offices, was a wake-up call for Democrats. Gov.-elect Glenn Youngkin focused on school issues and Democratic opponent and former Gov. Terry McAuliffe tried to tie Youngkin to Trump, which wasn’t effective, instead of talk about his policies.

“I just think the Democrats really need to get our act together,” she said.

Stefanik is in her fourth term representing the NY-21 Congressional District, which covers all of Warren, Washington, Clinton, Essex, Franklin, Fulton, Hamilton, Jefferson, Lewis and St. Lawrence counties and portions of Saratoga and Herkimer counties.

The latest congressional financial statements are out, showing Congresswoman Elise Stefanik has again handily out-raised her growing field of competitors.

What do we know about the Omicron variant?