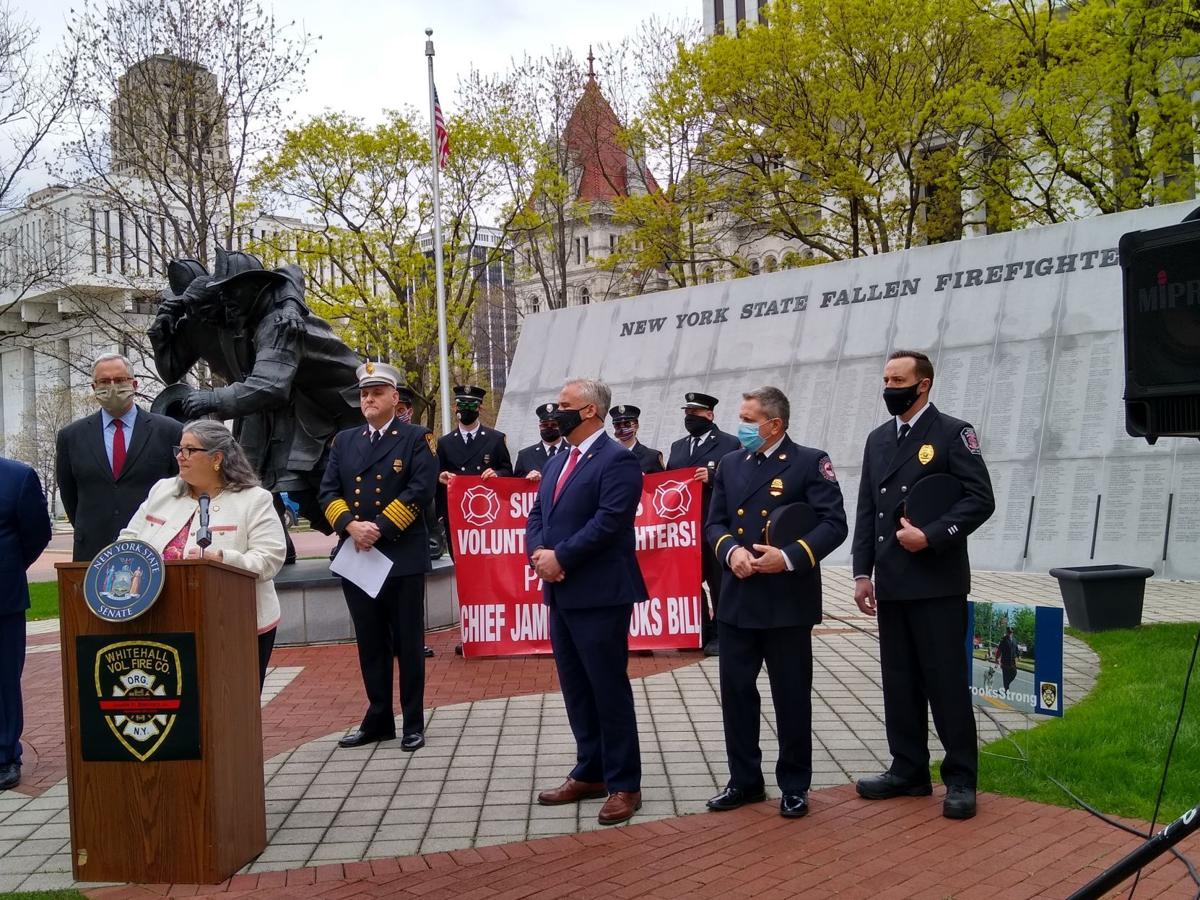 Assemblywoman Carrie Woerner, D-Round Lake, speaks at a news conference on Monday about a bill she introduced to provide disability and death benefits for volunteer firefighters who are killed due to a vascular rupture. The legislation stemmed from the death of Whitehall firefighter James Brooks. 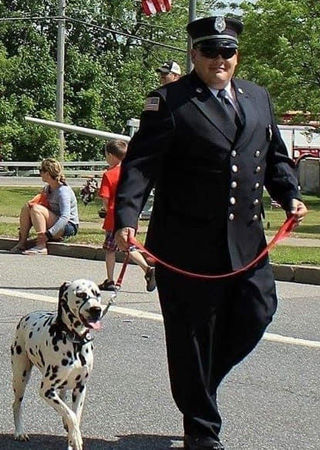 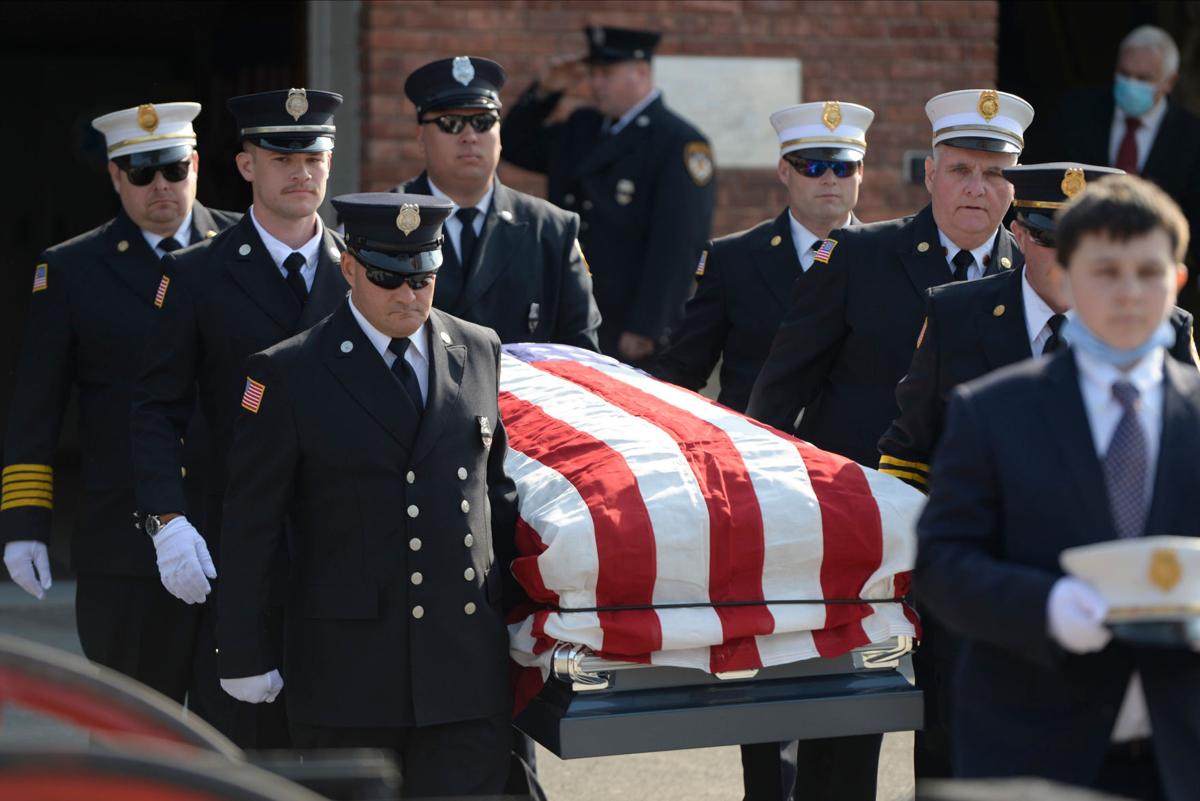 Lawmakers have introduced a bill to add vascular rupture to the list of injuries covered under the Volunteer Firefighters’ Benefit Law in honor of a Whitehall firefighter who died in September after suffering a line-of-duty injury last May.

James Brooks was second assistant chief of the Whitehall Volunteer Fire Company and was responding to a fire call in Dresden on May 2. He was reaching for his radio when he suffered an aortic rupture. He initially thought he had pulled a muscle and had intense pain when responding to the scene.

Brooks spent months at the University of Vermont Medical Center in Burlington, Vermont. He had three strokes, which confined him to a wheelchair and left him with the use of only his right arm.

Brooks died from his injuries on Sept. 17. Brooks had served in the department for 27 years.

He had accumulated about a million dollars in medical expenses during his hospital stay.

Members of the Whitehall Volunteer Fire Company have asked that Washington County cover the expenses, citing a state law that requires municipalities to cover medical expenses and provide compensation to any volunteer firefighter injured or killed while on duty.

However, the workers’ compensation claim was denied by Benetech Adjustments, the county’s insurer, because the company claimed it was a pre-existing condition.

The James’ family is appealing the decision to the state workers’ compensation board.

The Chief James Brooks Jr. Act would create a presumption of coverage under the Volunteer Firefighters’ Benefit Law for vascular ruptures suffered in the line of duty in the same way that heart attacks are covered, according to a news release.

State Sen. Dan Stec, R-Queensbury, is co-sponsoring the legislation in the Senate, and Assemblywoman Carrie Woerner, D-Round Lake, is taking it up in the Assembly.

The lawmakers made the announcement of the legislation at a news conference on Monday in front of the Fallen Firefighters Memorial in Albany. Also in attendance were Long Island Sen. John Brooks, Assemblyman Matt Simpson, R-Horicon, and Whitehall Volunteer Company Chief Brian Brooks.

“Most of us will fortunately never need the help of a volunteer firefighter,” Stec said in a news release. “But for those who do, it’s wonderful knowing that help is on the way. Assistant Chief James Brooks was one of those special individuals who would put his life on hold to rush to help others.”

The bill is in the Senate Local Government Committee.

Woerner said certain insurers still fight these claims in an attempt to argue that they could not be related to duties as a firefighter, unnecessarily increasing litigation costs and delaying the payment of qualifying benefits to volunteer firefighters injured in the line of duty while protecting their counties, according to a news release.

Woerner said volunteer firefighters perform a critical service to communities, and put their lives and health at risk. She said lawmakers owe it to them to ensure that they and their families are protected in the event of an injury or death.

Brooks’ sister, Kathleen Brooks, said she is excited about the bill and feels very passionate about it.

“I didn’t want to see another family have to go through this,” she said.

Brooks said it does not make sense that the current law covers heart-related deaths and injuries — but not aortic issues.

“Isn’t your aorta part of your heart?” she said.

Brooks said this legislation is important, especially for these volunteer firefighters. They are not getting paid, but are serving out of a sense of pride and desire to help their community.

“They’re the ones that are sacrificing their time and their family time — going to make sure your house and things are safe when you need them,” she said.

She said 100% of Washington County is served by volunteer firefighters — saving communities and taxpayers millions of dollars. This bill is a way to thank these firefighters who earn zero pay.

“This is going to ensure that volunteers feel like they’re protected by their communities. Otherwise, why would you want volunteer?” she said.

The family is still in litigation against Benetech. The matter is also being appealed to the state workers’ compensation board.

Deputy Chief Brian Brooks, James Brooks’ uncle, said there is no reason why the claim should have been denied.

He said his 45-year-old nephew was taking medication for high blood pressure.

“Jim didn’t have any preexisting conditions,” he said.

Brian Brooks said the existing benefits law states that firefighters should not be denied workers’ compensation unless it can be proved with overwhelming evidence that they had heart problems or vein problems.

The Washington County workers' compensation administrator, Benetech Adjustments, denied the nearly $1 million claim, citing a pre-existing condition. But firefighters dispute the claim, arguing the county has an obligation to pay the medical bills under state law.

The Senate passed a bill adding vascular rupture as a condition covered by insurance, in honor of a Whitehall firefighter's death.

The family of a Whitehall firefighter who died in the line of duty was awarded workers' compensation and death benefits on Tuesday.

No major injuries after plane runs off Texas runway

No major injuries after plane runs off Texas runway

Assemblywoman Carrie Woerner, D-Round Lake, speaks at a news conference on Monday about a bill she introduced to provide disability and death benefits for volunteer firefighters who are killed due to a vascular rupture. The legislation stemmed from the death of Whitehall firefighter James Brooks.