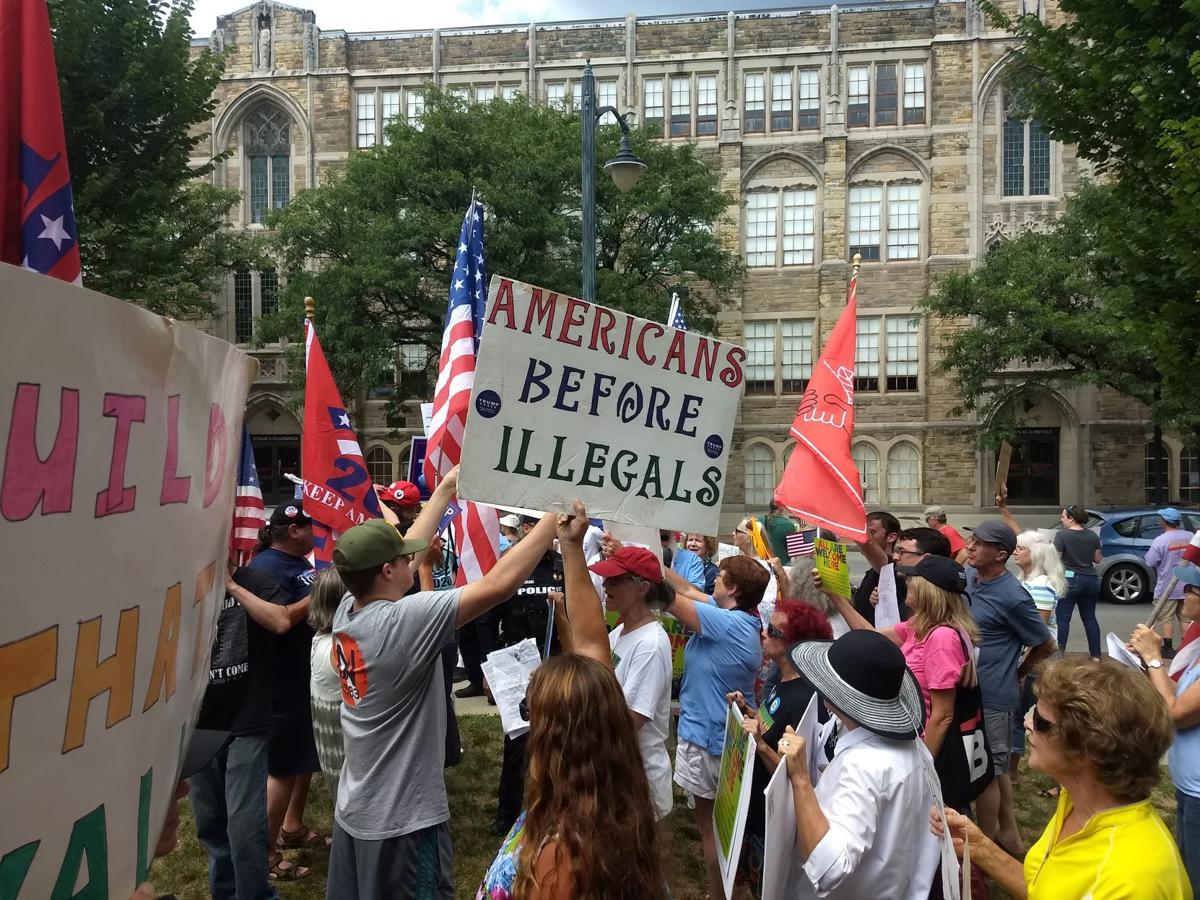 A group of protesters and counterprotesters gathered at U.S. Rep. Elise Stefanik's office in Glens Falls recently over the issue of migrant detention centers and immigration. 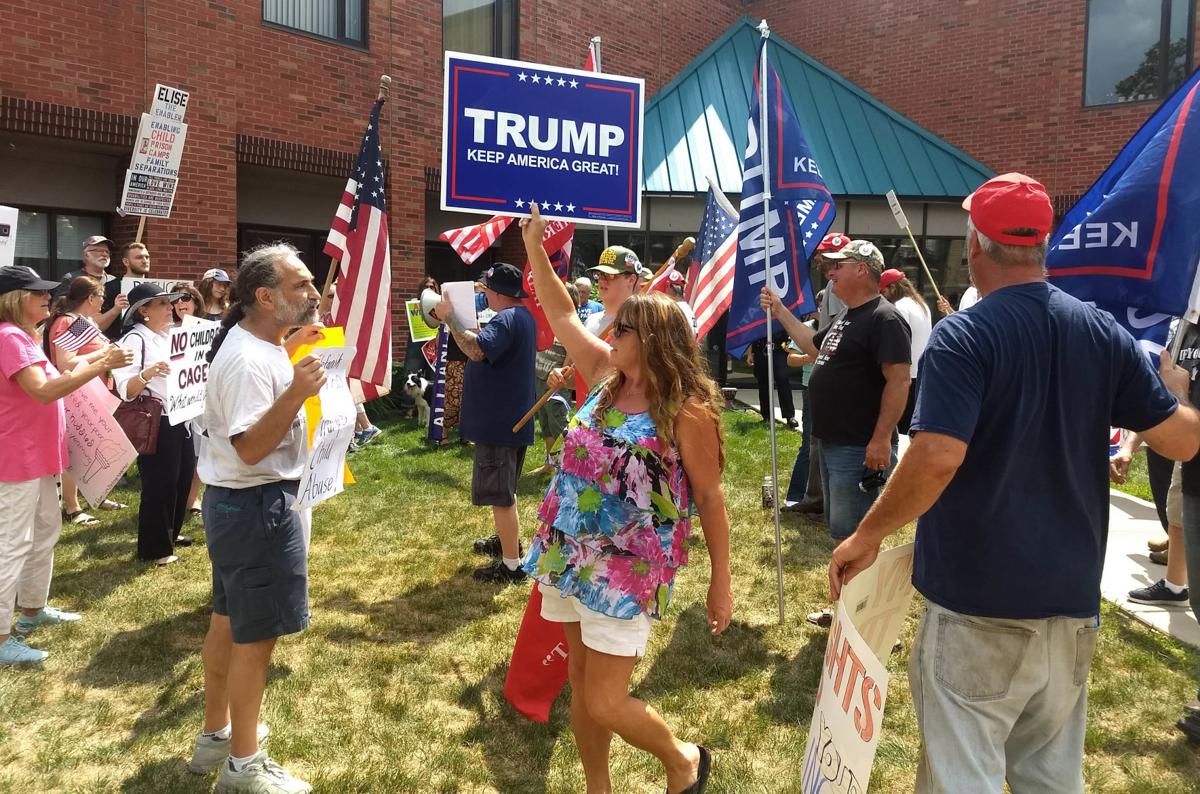 Glens Falls may soon require a permit for protests, in an attempt to avoid bloodshed between two increasingly confrontational groups.

“People’s behavior is getting to a point — they’re invading people’s personal space, yelling and screaming and using a bullhorn,” police Chief Anthony Lydon said. “We probably need to do a better job, when things like that are going on, of keeping the groups separate.”

A permit would help, he said, because if “civil conversations” devolve into aggressive confrontations that could turn violent, police officers could remove those who didn’t have a permit to be there.

He stressed that he doesn’t want to interfere with people’s First Amendment rights. They can use curse words, even with a bullhorn. A group without a permit can form to counter-protest a group that has a permit. And he doesn’t want to limit them to locations where they wouldn’t be seen by the public. But, he said, his job is to keep the peace.

Most protests have gone on without trouble over the years, with people from both sides engaging in civil conversations.

“And if they don’t agree, they agree to disagree and they walk away. That’s what adults do,” he said.

Now, there are some people — he believes it’s only a small number within the larger group of protesters — who don’t want civil discussion, he said.

Hudson Falls resident Mike Kibling, the leader of the North Country Deplorables, may be encouraging the behavior, Lydon added.

“I think his goal is to intimidate and instigate,” he said.

But his actions don’t rise to the level of a crime, he added.

Six residents who protest Congresswoman Elise Stefanik’s policies, and have been confronted aggressively by pro-Trump protesters, met with Lydon and the mayor recently and sent them a letter, asking for more involvement by police.

“Our recent gatherings have been deliberately disrupted by those opposing our political and moral convictions, and although we believe all of our citizens have the right under the Constitution to voice their opposition, our right to gather, unimpeded, should equally not be threatened by aggressive intimidation, as has been the case in recent days,” they wrote.

They said they were worried the protests would turn into a physical fight.

“We feel we are justly alarmed by possible physical confrontation when their members press into our gatherings with malicious intent and shouting obscenities,” they wrote. “If displays of intimidation itself are not unlawful, any reasonable person knows it is the first step toward violence from an aggressor.”

At one protest this month, a group of pro-Trump protesters surrounded three liberal protesters, screaming in their faces to stop them from speaking to a couple who had stopped to ask about registering to vote.

Another man in the Facebook group wrote, “I want you in my sights. I want your neck under my boot. See you on the streets you anti-white scum.”

Lydon stressed that there has been no actual violence during the Glens Falls protests.

But he wants to get more training for his officers, saying that the police academy doesn’t cover large, dueling protests.

“This is new to us. The department has recognized that things have changed,” he said. “There’s very specific things police are allowed to do. That’s where the permit helps.”

The groups have also been forming at Centennial Circle, a small traffic circle where five main roads meet. That has become a traffic hazard, he said.

“We’ve always had protests at the circle, for years. It’s never been a problem,” he said. “But if you put 100 people at the circle, it becomes a traffic hazard.”

The permit would ask protesters to estimate how many people will attend. Based on that, the city might limit the location of the protest, eliminating small areas like Centennial Circle.

Lydon acknowledged that it’s a good location for a protest, because so many people driving by will see it.

“I get it, the whole point is to grab the attention of the general public,” he said. “But Centennial Circle is the main thoroughfare to the hospital. If an ambulance can’t get through for 10 or 15 minutes because we have too many people at the circle, that’s concerning.”

He also wants to ban the use of the siren noise on bullhorns.

“The use of that siren is becoming an issue,” he said. “We’re looking into stopping that. Everybody believes a siren is an emergency vehicle.”

Mayor Dan Hall said city officials are reaching out to the New York Conference of Mayors for guidance on a protest permit.

“We’re looking at a possible permit for any kind of get-together for political purposes,” he said.

Permits are currently not required for demonstrations if people are on the sidewalk, according to Hall.

Hall hopes to have a proposal within a month.

“We’re going to keep a good eye on this to make sure things don’t get out of control,” he said.

Ending the silence: Trump supporters speak out at Centennial Circle

Environmental writer among those arrested at protest

One of the people arrested in Thursday’s protest outside the Glens Falls office of U.S. Rep. Elise Stefanik, R-Schuylerville, was environmenta…

GLENS FALLS — With dueling chants of “immigrants are welcome here” and “build that wall,” a group of protesters and counterprotesters squared …

Protesters clash over calls for impeachment in Glens Falls

GLENS FALLS — In dueling chants, a volley between protest groups bounced from one side of the street to the other on several corners of Centen…

Letter to the editor: Protests show the shouting of cliches

COLUMN: This could get violent, even here in Glens Falls

GLENS FALLS — I came downtown for LARAC’s annual crafts festival, but the show was around the corner at Centennial Circle.

BLOG: Anger vs. love and a pro-Trump rally

GLENS FALLS — On Saturday evening I was assigned to cover the pro-Trump rally in Glens Falls' Centennial Circle.

Surrounding someone and shouting in their face isn’t protest, it’s harassment, and we have seen instances of that recently in downtown Glens F…

Both sides: Don't require a protest permit in Glens Falls

Both liberals and conservatives say they oppose a proposal by Glens Falls officials to require permits to stage protests and rallies in the city.

Last month during a protest outside Rep. Elise Stefanik's office in downtown Glens Falls, six of the protesters entered her office and demanded to speak to the congresswoman by phone or Skpye. They were told the office was immediately closing and that the police had been called which led to the arrest of the Glens Falls 6.

GRANVILLE — The organization Friends who Support President Trump will hold a rally in Granville on Saturday.

A group of protesters and counterprotesters gathered at U.S. Rep. Elise Stefanik's office in Glens Falls recently over the issue of migrant detention centers and immigration.