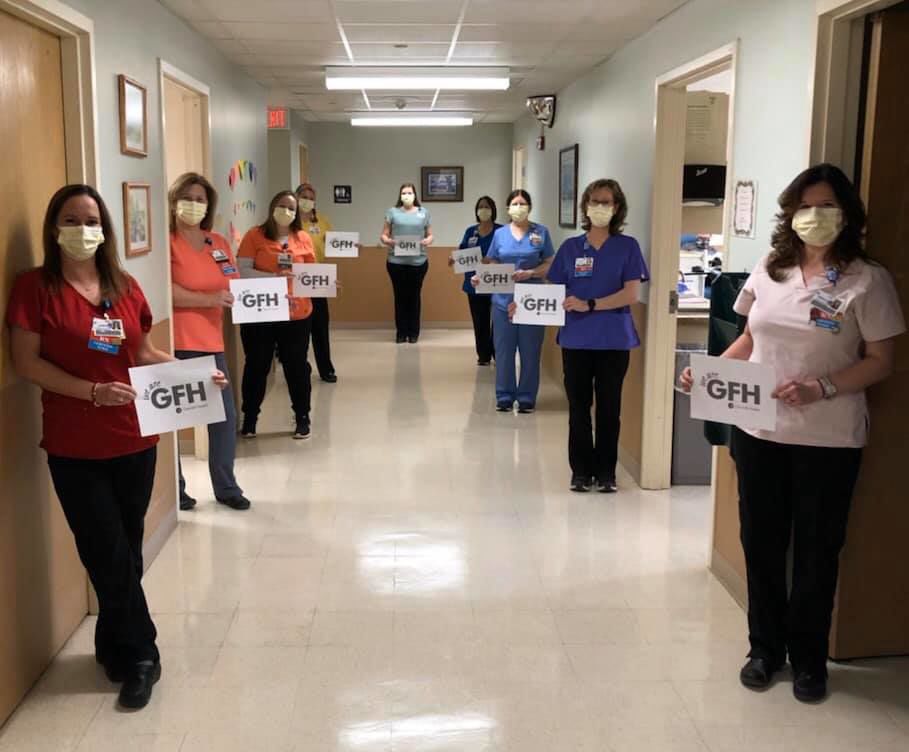 As Glens Falls Hospital begins to plan a return to normalcy, teams recently posed for photos to document all the people working during the pandemic.

Glens Falls Hospital will soon be able to resume outpatient surgery and other treatment.

Glens Falls Hospital and Saratoga Hospital will be reopening for “non-essential” care as early as next week.

Both hospitals meet the requirements set by Gov. Andrew Cuomo for reopening outpatient procedures, hospital officials said. They are allowed to start on April 28, though it’s unlikely there will be an instantaneous restart.

It is not yet clear which surgeries will be allowed, and if there is a surge of 10 new patients with coronavirus at either hospital, they will have to cancel all non-essential procedures.

The decision to reopen means that Glens Falls Hospital will be able to bring back many of the employees it furloughed. It also means the hospitals will be able to earn money at last.

Hospitals were ordered to stop all non-emergency surgeries on March 18. Since then, Glens Falls Hospital has collected 50% less revenue than the same period last year. The number of people in the Emergency Department on an average day has dropped from 125 patients to 60 patients. Surgeries have dropped even more, to 25% of normal, said spokesman Ray Agnew. Saratoga Hospital said it has seen a similar decrease in revenue and patients.

Now, clinical teams must find out from the state Department of Health exactly which procedures will be allowed, Agnew said. Then they need to prioritize patients, beginning likely with those who had planned treatment that was postponed when the hospital had to stop that work on March 18.

Each patient must be tested for coronavirus before treatment, which means at least a 72-hour wait. The hospital does have enough tests for the prospective patients, Agnew said.

Only those who test negative can be treated for non-essential care. The state is also putting limits on surgery and limiting treatment to outpatient procedures. That can include many day surgeries, but possibly not joint replacements, which often involve a multi-day stay in the hospital.

Hospitals have never been banned from doing emergency surgery, such as surgery for a broken hip. Those will continue. But hospital officials have seen far fewer emergency cases in the last month, which has them worried.

Agnew added that the hospital is allowed to take care of anyone who is having an emergency.

“Everybody’s afraid, but if you have a potential emergent need, the hospital is a safe place to be. If you have chest pains, please do not tough it out at home,” he said.

Saratoga Hospital has seen many emergency patients delay coming in until the last moment.

“Patients are avoiding coming to the hospital for an important medical need out of fear of being exposed to the virus. This is leading to numerous cases that would have been routine now becoming a serious threat to health and life,” said Chief Medical Officer Dr. Richard Falivena.

He called it an “epidemic of avoidable complications.”

He urged patients to come to the hospital just as quickly as they would have before the pandemic.

“Perhaps one of the most important messages for the community to hear is that all of our hospitals have the precautions and safety protocols in place to care for all of our patients,” he said. “If someone is sick or hurt, they should not hesitate to seek the care they need. Waiting is putting patients at risk for complications and enduring unnecessary pain.”

Glens Falls Hospital employees who were furloughed on April 13 are eager to hear if they can come back to work. But Agnew didn’t have any details yet.

He’s also well aware that the medical situation could change soon. If the hospital has more than 10 new coronavirus patients in 10 days, it must stop the non-essential procedures.

‘We all know we have a very difficult situation in our nursing homes,” he said. “What if we balloon up over 10? What if we open for five days and have to close again?”

“The bottom line is we want to provide care,” he said.

He added that Cuomo was not wrong to require every hospital to increase capacity by canceling all non-essential procedures, even though Glens Falls Hospital ended up not needing that capacity.

“In our opinion, the state government and the governor has done a really good job,” he said. “It shows the strategy was effective.”

Local hospitals say they are hemorrhaging revenue as the coronavirus pandemic stretches on.

As Glens Falls Hospital begins to plan a return to normalcy, teams recently posed for photos to document all the people working during the pandemic.

Glens Falls Hospital will soon be able to resume outpatient surgery and other treatment.