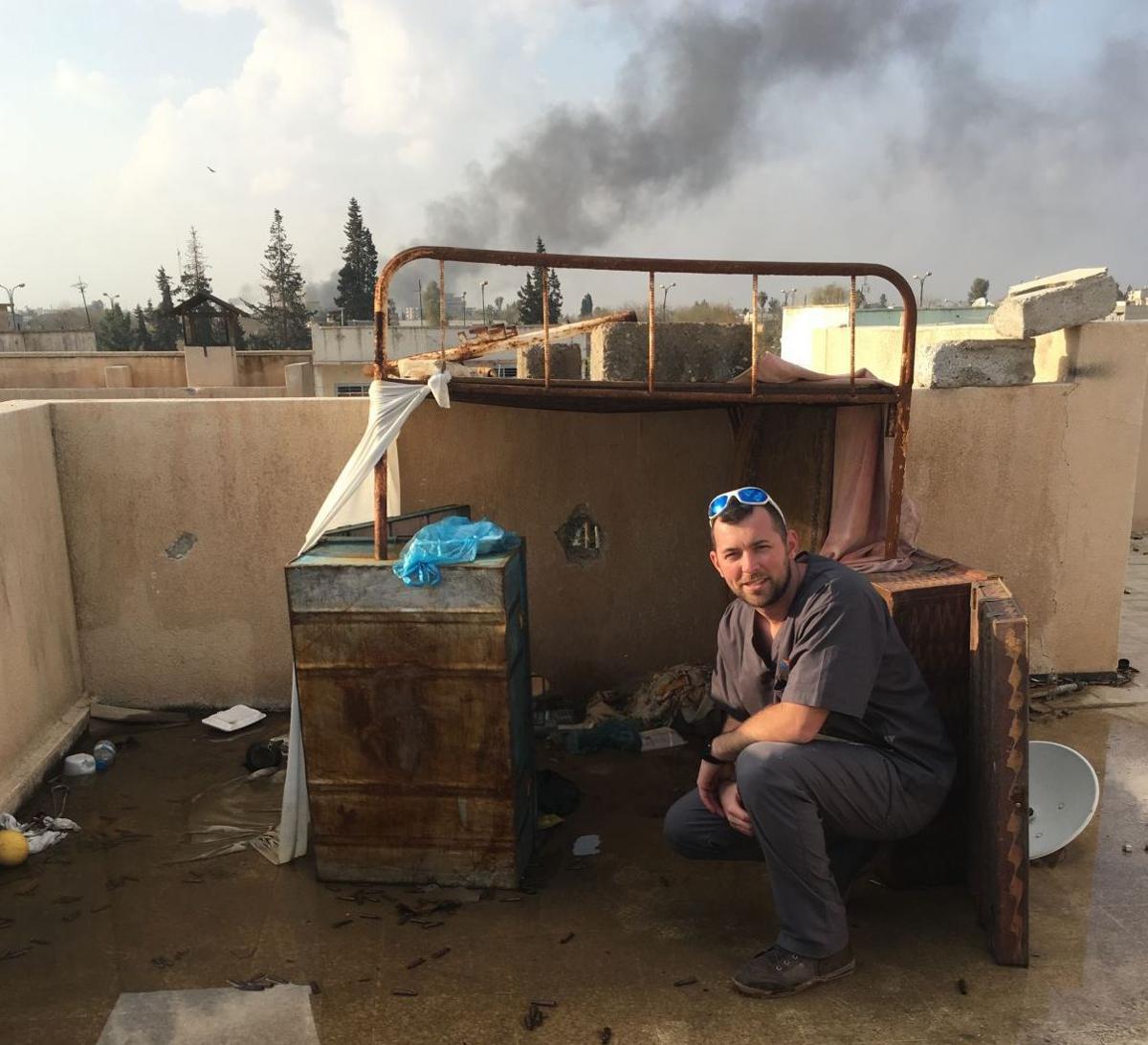 Tom Ordway, who is serving as a volunteer medic in Iraq, is seen

on a rooftop as smoke billows from combat off in the distance. 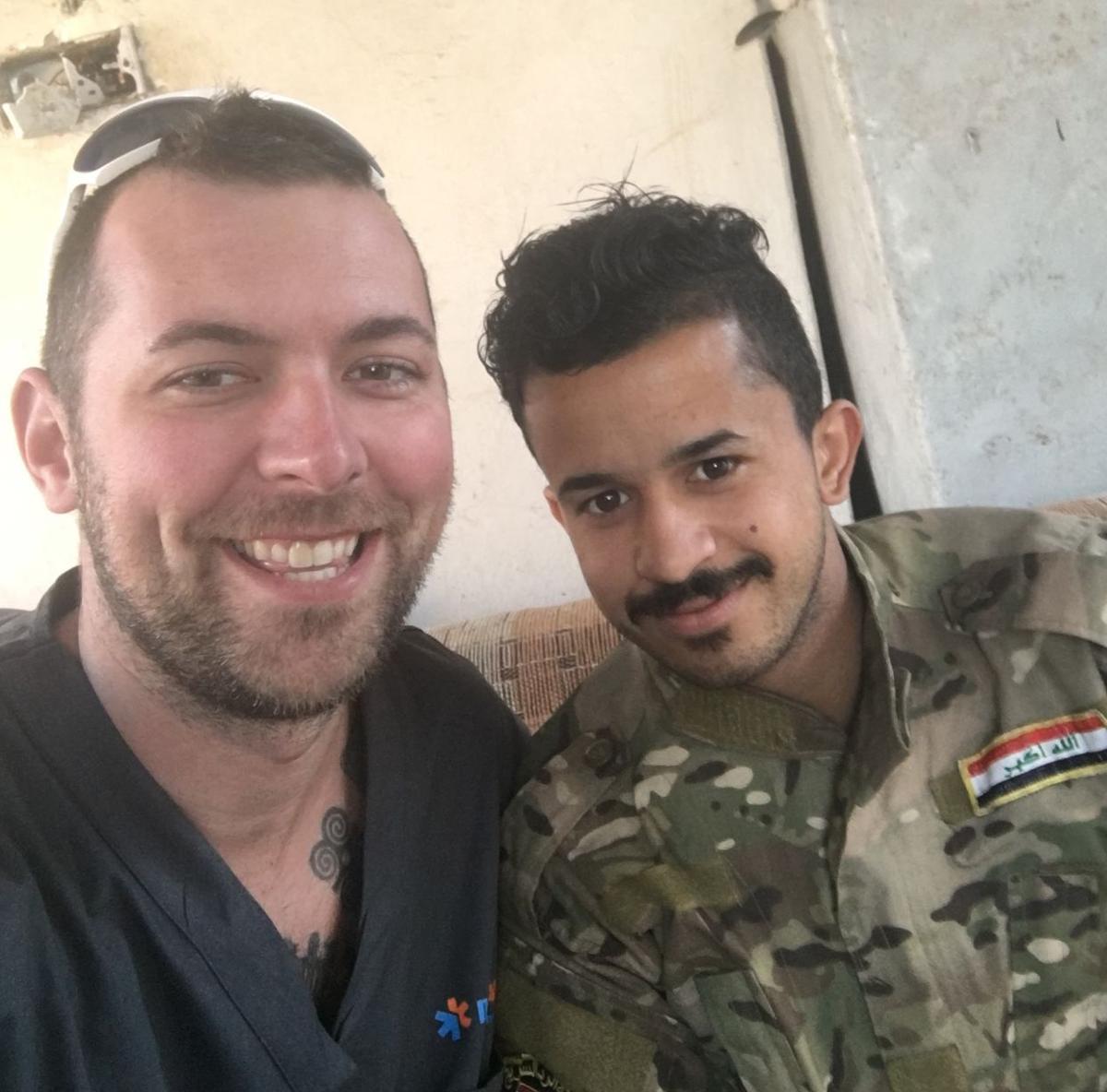 Tom Ordway, left, with an Iraqi military member during Ordway’s stint in Iraq in March as a volunteer medic. Ordway, a Glens Falls resident, is a Glens Falls firefighter.

The ambulance Tom Ordway was on was headed to a hospital in northern Iraq, and as it passed another ambulance leaving the hospital, he noticed the other vehicle was heavily damaged.

“It had been hit by two mortars. The back doors were blown right off,” he said.

Body armor was a standard part of the uniform for Ordway during the 18 days he spent in Iraq last month as part of the volunteer group NYC Medics, treating victims of the brutal war to oust the radical group ISIS from the country.

He returned last week to resume his duties as a paramedic with the Glens Falls Fire Department, after nearly three weeks of helping civilians and members of the Iraqi military at a triage center in western Mosul.

The mobile medical centers are known as “trauma stabilization points,” and Ordway and his fellow paramedics — volunteers like him from the U.S. — were tasked with providing the first medical care to people injured in combat and vicious attacks by ISIS personnel. They moved as the front lines moved.

Their goal was to stop bleeding, administer pain medications and prepare patients to be taken to area hospitals, work that he described as helping “waves of patients” with only minutes devoted to each one.

“You have 15 minutes with a patient and that was it. Stabilize, start IVs, stop the bleeding with tourniquets,” he said.

He recalled an injured 16-year-old prisoner of war coming in at one point, and wonders how that teen could endure what he went through at such a young age.

The craziest day was when scores of injured were brought in after ISIS terrorists detonated a bomb hidden in a front-end loader in a military convoy, Ordway recalled.

“We had 37 patients come in in 25 minutes,” he said. “It was unbelievable. You would have dozens of patients, and then your down time was spent getting ready for the next wave of people.”

Ordway has been working as an emergency medical technician since he was 16, first serving with Johnsburg Rescue Squad and then spending years in Brooklyn before settling in Glens Falls to work as a paramedic with the Glens Falls Fire Department. He said there were days in Brooklyn he felt more in danger than in Iraq.

He credited Joe Connelly, president of the Johnsburg Rescue Squad, with letting him know about the opportunity to help with NYC Medics. Connelly, a co-founder of the group, was in Iraq in February.

Connelly said he has gone to other disaster scenes with NYC Medics, but his trip to Iraq was his first to a war zone.

“Each team lasts about two and a half weeks, overlapping slightly to help transition,” Connelly said in an email.

Ordway said he didn’t hesitate when the offer was broached. He got an email at about 7 a.m. one day in January, seeking volunteers, and by 7:15 a.m. he had responded that he was willing.

He said the Iraqi military did a great job keeping the volunteers safe.

“There wasn’t a time there where I didn’t feel that I would come home safe,” he said.

And he said he may return there later this year, if he’s needed and the opportunity is offered.

“It was absolutely an amazing experience,” he said.

Ordway’s team was the subject of an article in the Los Angeles Times during its assignment, which can be found at www.latimes.com/world/middleeast/la-fg-iraq-american-medics-2017-story.html.

Don Lehman covers crime and Warren County government for The Post-Star. His work can also be found on Twitter @PS_CrimeCourts and on poststar.com/app/blogs.

Wildfire situation may worsen in Northwest this week

Wildfire situation may worsen in Northwest this week

Biles returns to competition with a bronze medal

Biles returns to competition with a bronze medal

Looking back at local history: April 6

Take a look back at local history. Here are the top stories for April 6 from one, five and 10 years ago.

Tom Ordway, who is serving as a volunteer medic in Iraq, is seen

on a rooftop as smoke billows from combat off in the distance.

Tom Ordway, left, with an Iraqi military member during Ordway’s stint in Iraq in March as a volunteer medic. Ordway, a Glens Falls resident, is a Glens Falls firefighter.