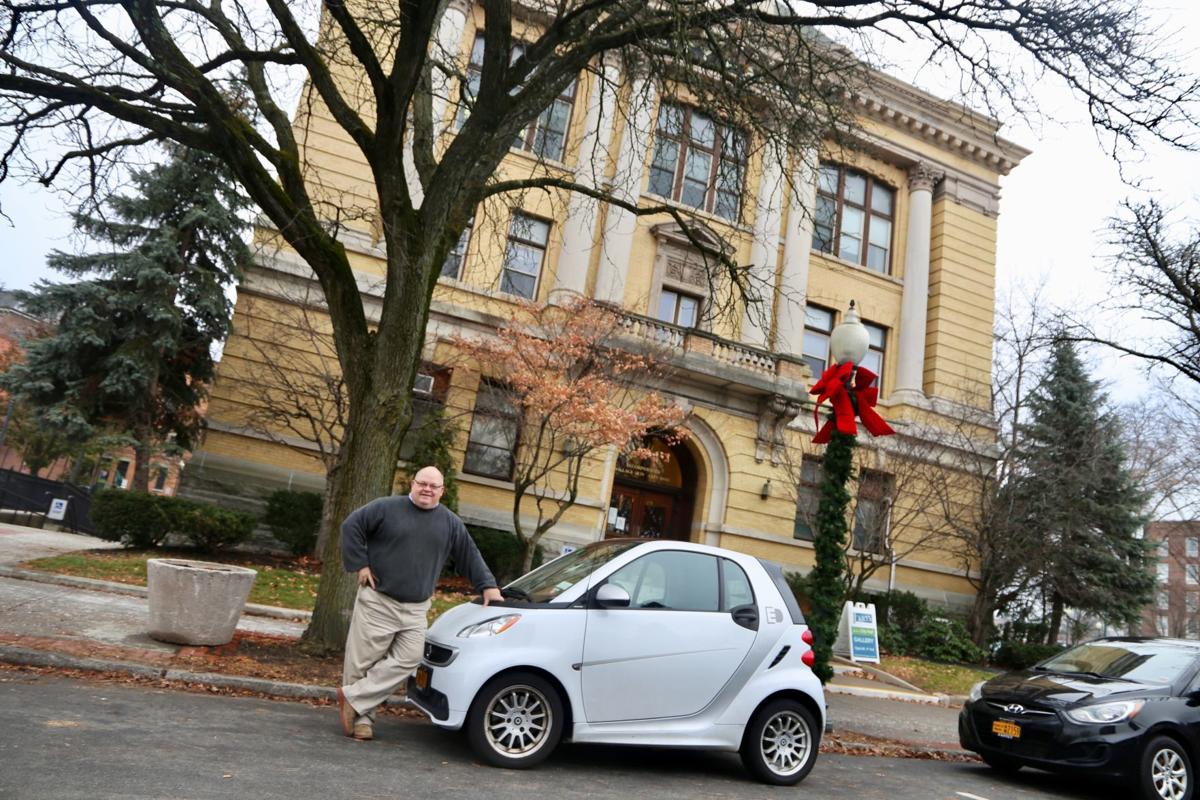 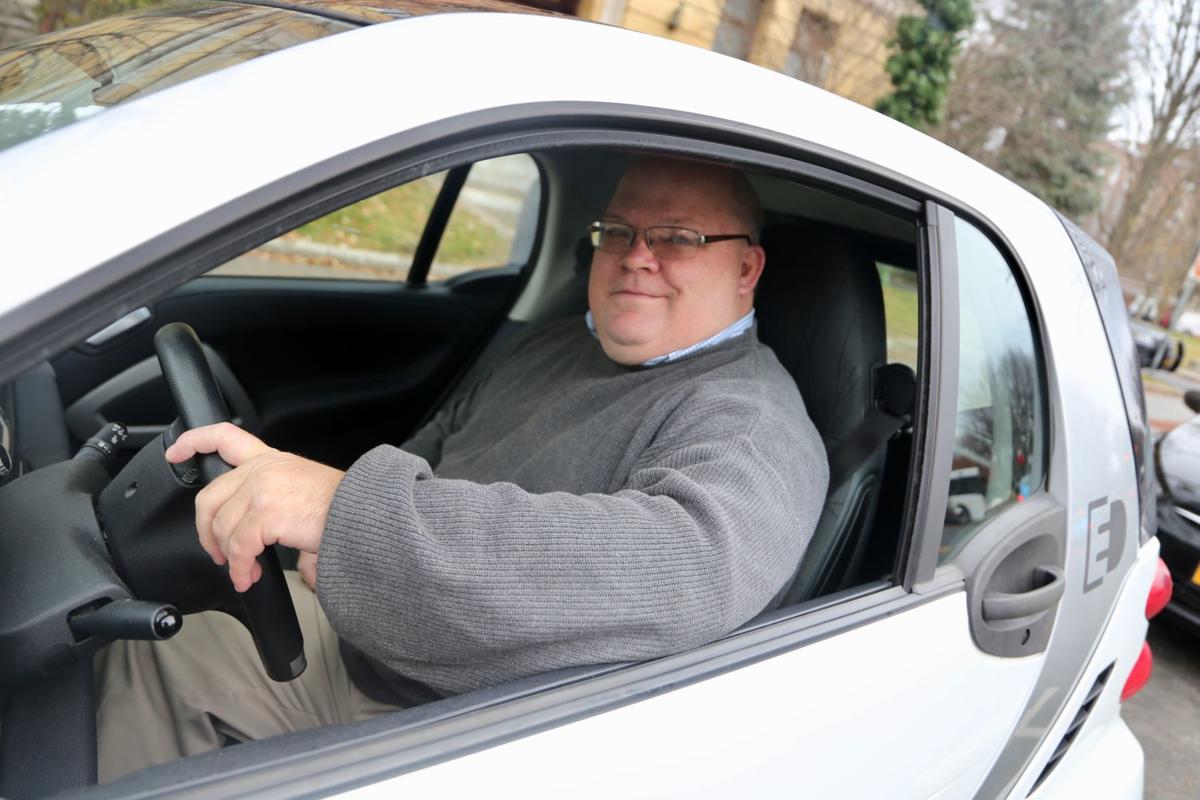 Glens Falls Sustainability Coordinator Jeff Flagg poses in front of City Hall in his new smart car. Flagg has landed about $250,000 in grants for the city's green energy efforts and said more savings are in store for city taxpayers.

Jeff Flagg lives in the tiniest house in Glens Falls and drives the tiniest electric car they make, which only magnifies his larger-than-life presence.

The Glens Falls sustainability coordinator, who got his foot into City Hall first as a Zoning Board member in 2013, is making a big impact on the wallets of city residents too — an impact that will be felt for years.

“You could roughly say close to a half-million dollars in the last few years,” he said of money coming into the city from his grant-writing efforts, though he’s quick to deflect praise saying he wants the city as the focus.

With hands flying, sitting on a couch in his 624-square-foot home as his dog Willow circled the coffee table carrying a 2-liter empty iced tea bottle from the spout, Flagg rattled off energy-saving city successes that include new lights at East Field, electric car charging stations, landing a $100,000 grant to study a city emergency “microgrid” and a grant of up to $225,000 to become the state’s first “smart city.”

He’s also working on a $43,500 grant application to help the city become a Climate Smart Community.

He was the catalyst in getting the city code enforcement officer an electric car, which, if not for some odd state rules, he could have landed for free. He combined a federal tax credit with a NYSERDA rebate and an aggressive dealer rebate, and the city is paying $62.50 month to lease the vehicle.

The 54-year-old sparkplug helps coordinate the city’s Sustainability Committee, chairs the Climate Smart Community Task Force and is a member of the Glens Falls Tennis and Swim Club Steering Committee. He’s passionate about efforts to save money though “green” practices, and said he works far more than the roughly 10 hours a week he gets paid for, but he’s OK with that.

City Councilman Bill Collins, the chairman of the Sustainability Committee, praised Flagg as a smart guy and a “great researcher” who has a knack for finding cost-saving opportunities. He said Glens Falls, in part through Flagg’s efforts, could be the first carbon neutral city in the state.

He also spoke about how humble he is and how few know of his efforts.

“He’s put in hundreds if not thousands of hours of volunteer work and most don’t even know his name,” Collins said. “It’s about public service with him.”

The road to Glens Falls

Flagg is an Ohio native who landed in the area in 1997 because an American Studies professor at Bowling Green State University told him his home state of Ohio “sucked” and that he “had to see the Adirondacks.”

But he then stubbornly called his professor’s bluff and interned at Great Camp Sagamore in Hamilton County’s Raquette Lake.

After the internship, he got his doctorate in American Studies to add to his bachelor’s in business and master’s in English. And when he graduated in 1999, he came back.

Soon he was running all the educational programming at the camp, the former Vanderbilt Estate, which in 2012 led to the wildly successful Black Fly Beer Camp, featuring craft brews, demonstrations, music and artisan food. He and others reasoned beer might be the only thing to get people into the Adirondacks at a time when black flies literally rule.

“In three years, we had a waiting list,” he said with a grin.

In 2010, though, he bought his little house on East Beacon Street and would live in the Adirondacks half the year and in Glens Falls the other half.

City Director of Tourism Amy Collins became friends with Flagg during this period and knew he liked civic work. She suggested he apply for a seat on the Zoning Board to get involved. He did and served four years.

That was the entrance into City Hall, where he’s now a frequent fixture. He got then-Mayor Jack Diamond’s ear about trying for a $100,000 grant to develop a green energy emergency micro-grid in the city to provide clean power during emergencies if the grid were to go down.

Diamond gave him permission to chase the grant, and he landed it. The city didn’t get one of 11 $500,000 second-round grants, which all went to bigger cities, but his efforts made an impression.

Current Mayor Dan Hall said he realized Flagg was an asset and should be paid for his work. He said Flagg is a master at finding cost-saving grants and is taking a lot of pressure off him to work toward state green energy mandates.

“His initiatives have been really good for us,” Hall said. “He’s always going to different conventions and keeps us abreast of what’s going on.”

As for him as a person, Hall was quick to say, “he likes to talk,” followed by a big laugh.

“He’s an interesting person. Very smart. He’s a good fit for us,” he said.

More than meets the eye

Flagg is an Ohio kid who transplanted into the Adirondacks and landed in Glens Falls. That’s established.

But he also lived for four years in Brooklyn doing public relations for a nonprofit supporting the Onondaga Nation land claim, in between Sagamore stints.

“Best thing I’ve ever done,” he said, admitting he knew no Chinese and really decided to go only after seeing a fast-approaching deadline on a flyer on a campus wall.

He was getting his doctorate at Bowling Green at the time.

These days, Flagg also teaches English at SUNY Adirondack and has taught at Siena — and even in the Washington Correctional Facility in Comstock.

Oh, and he could run a 4.6-second 40-yard dash in college and walked on to the University of Miami Ohio football team, snagging a tuition scholarship as a running back. He jokes that he never saw a snap, but his college bill was light and he said he was the star running back of the team that the starters went up against in practice.

“I have a big trophy. I was scout team Player of the Year,” he said grinning, adding that he played behind George Swarn, who later played in the NFL.

He has had the ear of the past two mayors, but has also landed a combined $1 million in grant funds for entrepreneur John Carr’s planned “Craft Beverage Campus” in Lake George and a firehouse community building in Indian Lake. Neither project materialized yet, but the grant funding was successfully secured.

Indian Lake’s Town Board ultimately reversed course, deciding against proceeding with converting a donated grocery store into a fire department community hub, despite previously voting to seek the grant money to proceed, he said.

Carr, who owns Adirondack Pub and Brewery in Lake George, said plans for the craft beverage campus aren’t dead, but on hold for now as he lets the potentially saturated industry settle a bit.

He met Flagg at the Beer Camp and marveled at his energy and skill as a planner and host of the event. He now calls him a friend and he, too, said he’s a major asset for the city and the region as a whole. He also called him “selfless.”

“He’s not the guy who wants to bask in the limelight. He just goes and does his thing,” he said.

A huge project Flagg hopes to see completed by next summer is the conversion of all city streetlights to high-efficiency models with countless capabilities. It’ll save about $250,000 a year, he said, after a 10- to 12-year payback.

And the city now has no electric bill at East Field after $50,000 it got for becoming a “Clean Energy Community” was used to upgrade lights there, and now Glens Falls Dragons owner Ben Bernard is paying the whole bill, which is less than half of what he was paying before the improvements.

“The city was paying $1,200 a month to keep the lights on. They’re not paying anything now,” he said.

In the future, he said he’d love to see solar panels on the old Glens Falls dump on Luzerne Road, and he has suggested using innovative in-pipe power generators that could use gravity from city reservoirs to generate additional free power.

He’s pursuing, along with several other communities, a plan to join forces and buy energy in bulk as a unit through a NYSERDA program to save residents money.

“We’re so blessed to have people like Jeff in the community. He’s well educated and there’s always nuggets to take away from conversations with him,” said city Councilman Jim Clark, who also serves on the Sustainability Committee. “Some people love to flaunt their education, but Jeff’s so unassuming.”

Flagg is well aware of the irony when he comes wheeling into a parking space in a smart car that leaves another half space behind it. And when his stout frame pops out of it, well, again, he’s aware of the irony.

“Kids love my car. They love little tiny cars,” he said, eyes widening, arms flying, voice rising. “They’re surprised when I get out of it. ‘How can that thing get outta that car,’” he said through an infectious laugh.

He got the car for a couple of reasons. Obviously, as the green energy guy for the city, it made sense to walk the walk. But perhaps more importantly, he said, he wanted to better understand the capabilities and limitations and live the life of charging his car.

“I charge at home for about $1.50 and it can go 80 miles. It’s about 126 miles per gallon,” he said, adding that the quiet ride and the quick acceleration are positives; the lack of distance is the drawback.

“Mine is 624, so if he was right, then mine’s the smallest. Everything in my life is tiny, but me,” he said with another chuckle.

Glens Falls Sustainability Coordinator Jeff Flagg poses in front of City Hall in his new smart car. Flagg has landed about $250,000 in grants for the city's green energy efforts and said more savings are in store for city taxpayers.