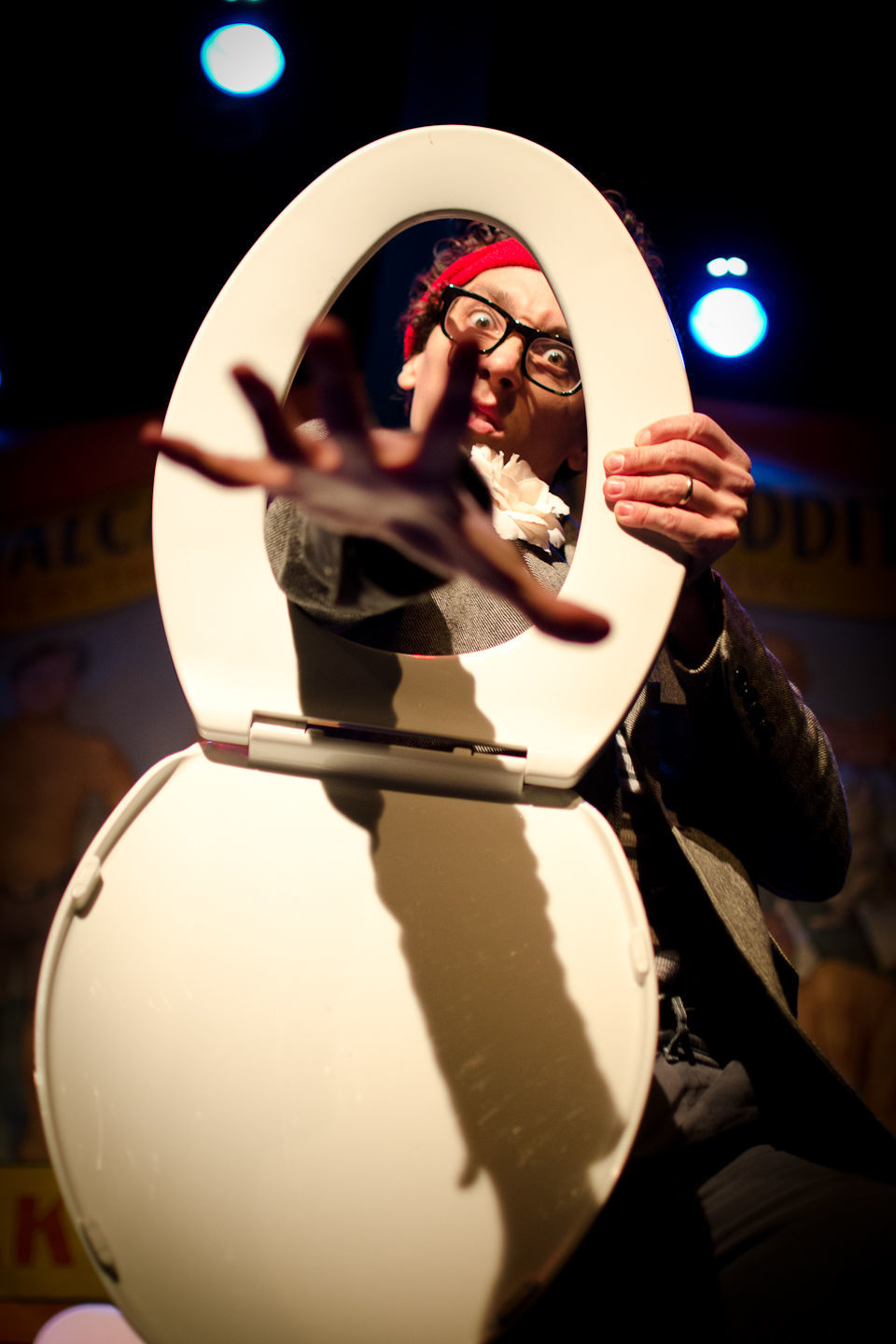 Comedian Jonathan Burns is bringing his "Flexible Comedy" act to Glens Falls on Friday and Saturday. 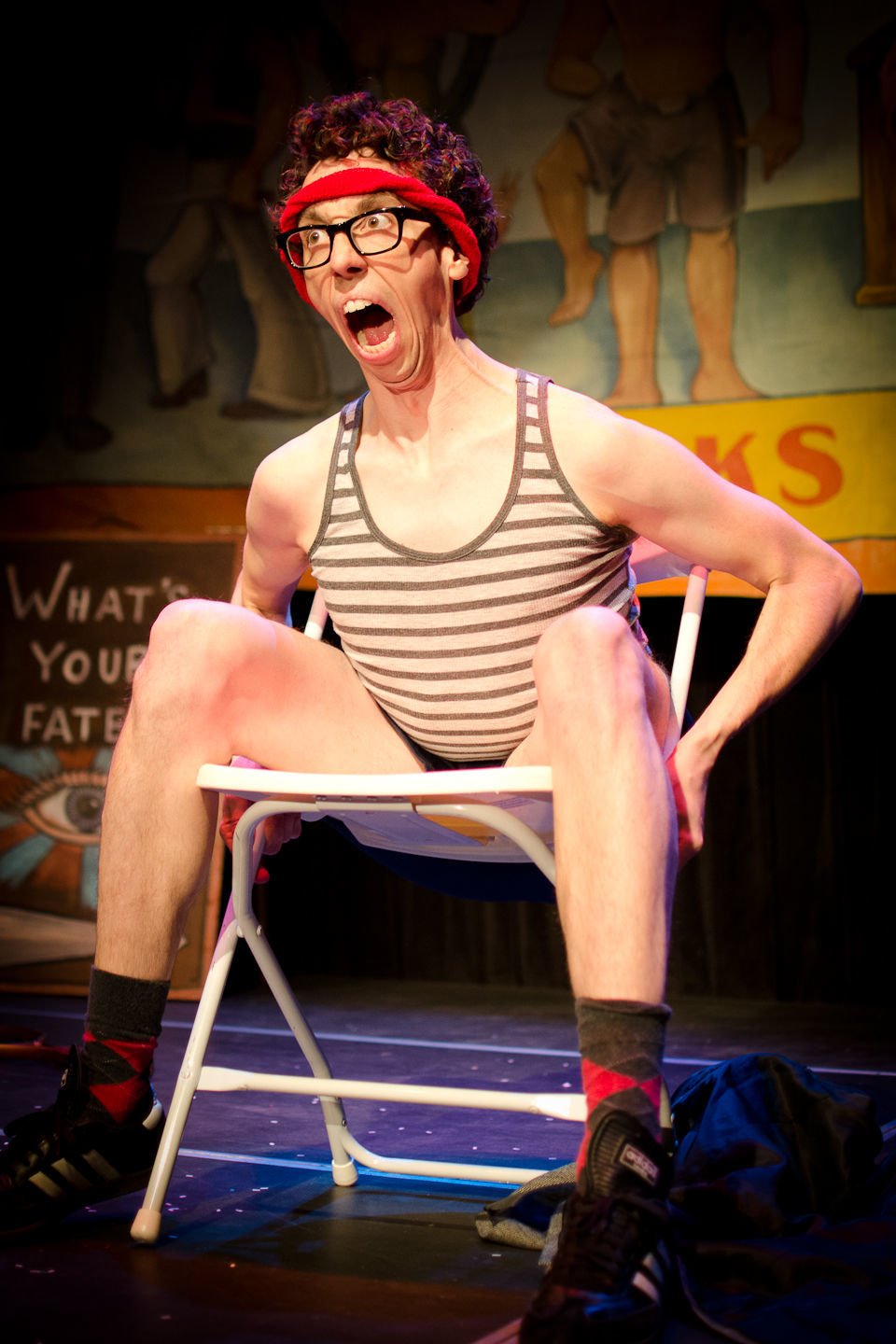 GLENS FALLS — There’s something seductive about a guy who can charm an audience by throwing red knit headbands into the crowd while fitting his body, legs and all, through a toilet seat or a stringless tennis racket.

“I’ve always been bendy,” said comedian Jonathan Burns, who was on the phone while driving to a gig near Chicago on Wednesday.

Referring to the way he can fit himself into the smallest and most unusual spaces, Burns said it’s part of his act. “It’s hard to define what box I fit into, pun intended,” he said, laughing. “Comedy is the base, but I’ve always been interested in magic. I’m like a one-man talent show.”

On Friday and Saturday, Burns brings his “Flexible Comedy” show to Glens Falls as part of the Adirondack Theatre Festival’s summer season.

Recently, Burns slithered his long-legged way out of a small suitcase, wowing a cheering crowd and getting all four “America’s Got Talent” judges on their feet before he was moved on to the next round.

“Before Jonathan got four ‘yesses’ from the AGT judges, he got a ‘yes’ from us first,” said Rabinovitz. “He is one of the most uniquely funny acts I’ve seen. I’m glad that Simon Cowell agrees.”

On the road for about 200 days last year, Burns shared his wacky, discreetly evocative performances around the world and at such venerated venues as the “Just for Laughs” comedy festival in Montreal.

“I was aware of the festival for forever,” Burns said. “The cool thing was to be on a poster with Jerry Seinfeld. It was really exciting and really fun.”

As a kid, Burns put on what he calls his birthday party magic shows for family and family friends; and his zany antics and dramatic facial expressions were an outlet for all his pent-up energy and a way to fit in.

“I was the kind of kid who could have easily been picked on,” he said. “I made them laugh, and it was my way to make friends and be social.”

Burns didn’t get serious about taking his show on the road full-time until after college. At first, his parents were reluctant.

“When I told my mom, she said, ‘Maybe you could teach during the week and do it on the weekends,’” he said. “But once my parents knew I was going to go for it, they said ‘Do what you love. Find something that makes you happy.’ And now my dad is telling everyone I was on ‘America’s Got Talent.’”

Burns tells the story of his first gig as a street performer at the Baltimore Inner Harbor.

“I was struggling for three hours and I made less money than it cost to park our car. My then-girlfriend, who is now my wife, said ‘At least you’re not doing that again,’” he said. “But I wanted to figure it out. Money is not a motivation. I wanted to figure out how to hold an audience ... it has taken me a long time to cultivate those things.”

After more than 15 years of professional performing, he has found it is the smile, the subtle jokes, the looks and eyebrow raises, combined with a touch of magic and his amazing “bendy” contortions, that keep people’s attention.

“After thousands of shows and 10,000 hours of performing, it’s the micro-changes that I’ve been putting into the show,” he said.

In July, Burns is off to Europe and a cabaret show in Spain for three weeks. He has performed in Hong Kong, New Zealand and China, he said.

“My birthday party magic show has taken me all over the world,” he said. “I’m really excited to be part of the theater festival; knowing that three shows sold out blows my mind. I am excited to bring my silliness to you guys.”

The Adirondack Theatre Festival added a fourth Jonathan Burns Flexible Comedy show because of such a high demand for his performances.

GLENS FALLS — Sometimes comedy is a gentle mediator, bridging the uncomfortable, the murky, the grotesque. Its balm, a shared laughter at the …

Comedian Jonathan Burns is bringing his "Flexible Comedy" act to Glens Falls on Friday and Saturday.