GLENS FALLS — The smell of a roast turkey with all the fixings seems like a tradition for Americans on Thanksgiving. But after an inflated year of expenses in the U.S., more people are reaching out to food pantries to create their Thanksgiving feast.

On Monday, children of Abraham Wing School in Glens Falls walked to the Warren Hamilton Counties Community Action offices on Maple Street. As a part of their annual donation, students placed non-perishables into boxes to be distributed to the Glens Falls community.

“This is local kids from this ward,” said Lynn Ackershoek, executive director of Community Action.

“I get to see them grow up over the years too.”

Students paired in sets of two piled cans into the boxes during the early afternoon. When the train of kids finished placing their items in the boxes and had filed out of the room, Ackershoek stood back and took it all in.

“It’ll keep the shelves full a little while longer,” she said.

Ackershoek said that with the amount of inflation that has happened in 2022, it has become exceedingly difficult to keep shelves full.

“Fortunately at this time of year, more people are thinking about donating to the pantry. We’re getting donations pretty much on a daily basis. It could be something like the Abe Wing food drive or it could be someone who got something as ‘buy one, get one free’ and only needed one,” she said.

Molly Nicol, CEO of the Regional Food Bank of Northeastern NY, said the Latham food distributor has seen an uptick in distribution throughout the agency.

Ackershoek mentioned that she has seen the impacts of supply and demand hit the Regional Food Bank.

“Whatever is going on with supply and demand in this country is really impacting the food bank in Latham. I have to send out inventory sheets tomorrow to the north country pantries so that they can put an order in and have it by the first week of December. There’s no food on the inventory sheet for them to order food from,” she said.

Nicols said that regional food distribution center covers 41% of New York, from the Canadian boarder to Rockland County. She explained that at the beginning of the year they were jumping from one issue to the next.

“We were breathing a sigh of relief because we thought, ‘great we got through COVID,’ but then two weeks later the price of food and gas skyrocketed and inflation hit us with a vengeance,” she said.

With driving roughly 500 miles from the border to Rockland County and going from $3.70 a gallon to $6.17, the food bank’s fuel costs doubled. Also, with over 400 pantries needing deliveries, the disruption in the U.S. food supply hasn’t made the process easier.

“There’s been weeks we didn’t get any cereal and then the next week we get five truckloads. It’s been erratic and we’ve had to go out and purchase additional food,” Nicols said.

On a brighter note, Nicols mentioned that she has seen dedication among employees to getting food out as fast as possible and is thankful for the individuals who spend time volunteering or make donations.

“People are very generous, kind, and giving and they have come forward to do just that,” she said.

Nicols said food bank officials placed an order of turkeys in April as preparation for the holiday, but they were disappointed to hear that a quarter of their order had to be cut due to a shortage of birds.

But the ending to that story isn’t sad at all.

“In the beginning of September, 25% of that shipment was canceled due to bird flu. The good thing is, we were able to locally source turkeys and use donations from people who have helped us to buy more turkeys,” she said.

“Even though they are more expensive, we’re able to get all those turkeys out to our neighbors in need for Thanksgiving.” 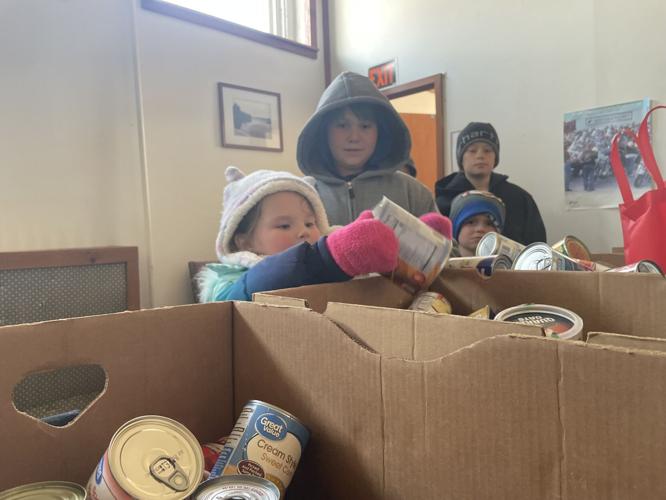 A young student of Abraham Wing School in Glens Falls drops her donation in a box at the Warren Hamilton Counties Community Action offices on Monday. The school's food drive is an annual tradition held the Monday before Thanksgiving. 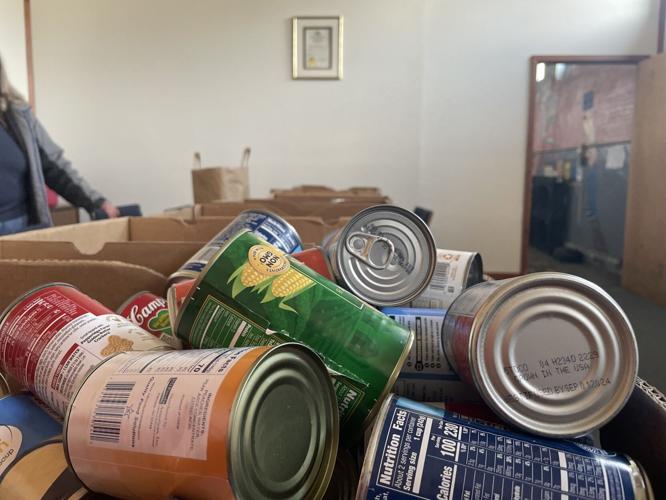