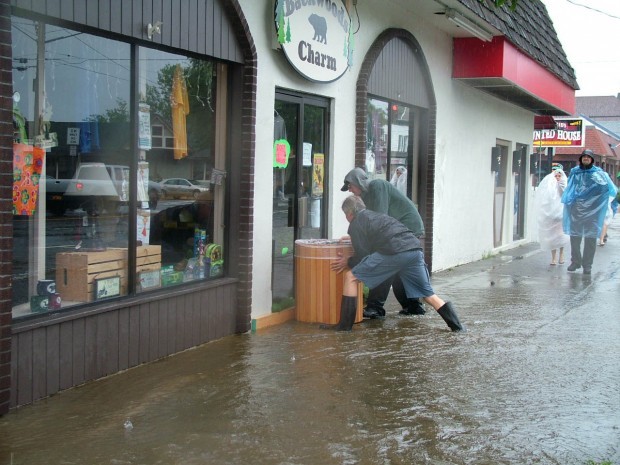 Lake George building owner Joe Iannuzzelli, left, and resident Doug Marco push a trash can against a door to secure a piece of wood meant to keep water out. Flooding became an issue in the village on Sunday. 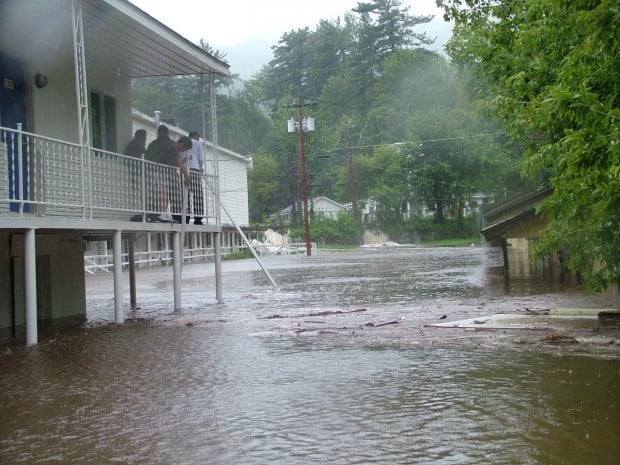 Motel 6 owner Mohammad Tariq and his family survey the flood at his property in Lake George off Canada Street on Sunday. He owns the two-story motel, as well as cottages on the right. Gushing water can be seen in the background. 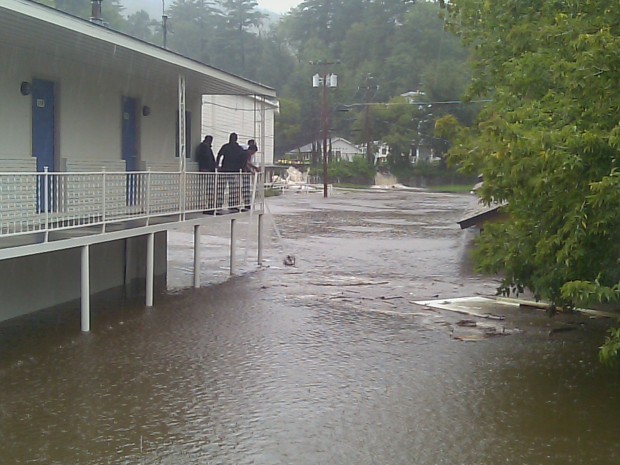 Flooding is seen from a hotel in Lake George on Sunday afternoon.

LAKE GEORGE -- Water rushed off of Prospect Mountain on Sunday and ripped through Lake George Village, leaving some Canada Street businesses under several feet of water.

Winds from Hurricane Irene, which was later downgraded to a tropical storm, dropped trees and power poles throughout the day, knocking out power and damaging homes.

But the storm’s nearly 4 inches of rainfall by Sunday evening led English and West brooks to jump their banks and flood roads, while water rushed down nearby hills and severely damaged Canada Street’s low-lying motels, restaurants and shops.

The parking lot of the Motel 6 turned into a 7-foot-deep pond in a matter of hours Sunday afternoon, flooding more than a dozen recently renovated cabins.

"I just spend hundreds of thousands of dollars on renovations," said Mohammad Tariq, owner of Motel 6. "The rooms are brand new and all screwed up."

Tariq and his two brothers stood on the second-story balcony, using long wooden poles to try and clear debris from local drain pipes in the hopes of draining some of the water.

But as of 4 p.m., a waterfall from Dieskau Street rushed into the lot, with no sign of slowing.

Tariq said he’s been asking the village to re-engineer the stormwater system near his property for months.

John and Terri Case own the Lemon Peel bar on Dieskau Street. Both stood outside their business Sunday afternoon and watched as the wall of water filled their basement and swamped the neighboring Woodbine Motel, before cascading into the Motel 6 parking lot.

"It looks like it stopped rising at least," John Case said.

The Cases spent the afternoon watching the water in the Lemon Peel’s basement rise until it was licking the ground floor.

After leaving the Motel 6 lot, the water then flowed through McDonald’s restaurant and neighboring commercial buildings.

State routes 9 and 9N, Bloody Pond Road, Lake Avenue and Bolton Road in Lake George were all washed out and closed on Sunday afternoon after the brooks flooded, and runoff overwhelmed the local culvert and stormwater systems. Route 9 turned into a river on Sunday afternoon, complete with white caps, as water tore downhill toward the village from the north. Officials closed Route 9 from the Magic Forest amusement park in southern Lake George to north of the village. Much of Beach Road was submerged and officials struggled with keeping people from driving around barricades.

A town bridge on Yaw Road was washed away, as were several town and county highways.

Warren County officials struggled on Sunday to keep an accurate list of the damaged roads and highways.

"We just can’t keep up," said Amy Drexel, the county’s deputy director of emergency services. "It all keeps changing so fast."

"It seems to be holding," she said of last-minute reinforcement measures to town roads.

Just three roads were damaged in Thurman as of 5:15 p.m., officials said.

Warren, Washington and Saratoga counties all declared states of emergency. Highway officials in Warren and Washington counties scrambled on Sunday night to find enough barricades for all of the road closures.

Washouts were reported in the Saratoga County communities of Hadley and Day, and substantial flooding was reported on Hanks Road and state Route 29 in Salem in Washington County. Officials also responded to flooding in White Creek.

Several drivers tried to cross the region’s flooded roadways and had to be rescued when their vehicle stalled or began to float.

Bill Cook, Washington County’s director of public safety, said there were concerns about the Mettawee River flooding in Granville and the Batten Kill flooding in Salem and Greenwich.

The Mettawee was approaching flood stage as of 4 p.m., while the Batten Kill was still below flood stage, according to the U.S. Geological Survey website.

"We’ve got the DEC and local residents keeping an eye on them," Cook said of the rivers.

All non-essential vehicular and foot traffic was banned in Granville at 8 p.m.

A truck from the Schuyler Hose Co. pumped water out from the basement of Saratoga Town Hall at the rate of 100 gallons per minute for hours on Sunday.

Lake George building owner Joe Iannuzzelli, left, and resident Doug Marco push a trash can against a door to secure a piece of wood meant to keep water out. Flooding became an issue in the village on Sunday.

Motel 6 owner Mohammad Tariq and his family survey the flood at his property in Lake George off Canada Street on Sunday. He owns the two-story motel, as well as cottages on the right. Gushing water can be seen in the background.

Flooding is seen from a hotel in Lake George on Sunday afternoon.