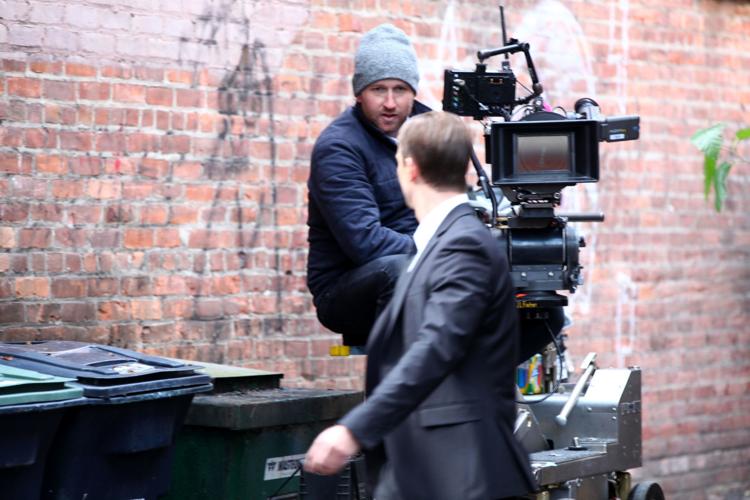 Los Angeles filmmaker Drew Mylrea stops filming to talk with an actor on set during the filming of ‘Spy Intervention,’ an independent comedy shot last year in Glens Falls and Lake George. 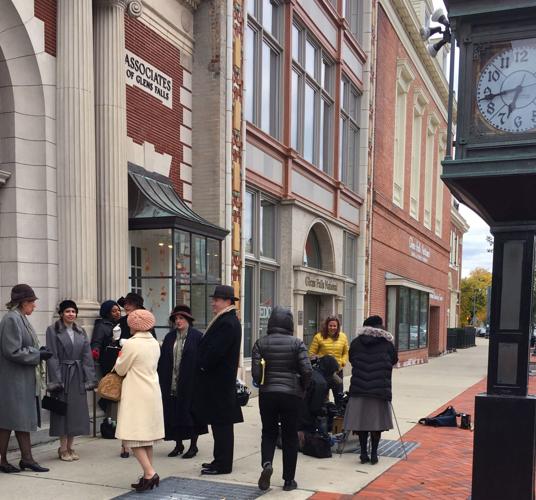 Cast members of the movie ‘Radium Girls’ wait on Glen Street in Glens Falls in October 2016 while the movie’s producer talks to the crew. The film will headline the Adirondack Film Festival this fall.

Meader did not say any more about that project, or others in the works, as details are still being nailed down. However, he said the Adirondack Film Commission has been working to recruit various film and television projects to the area following the success of “Spy Intervention,” which wrapped up production in November after about 20 days of principal photography at 24 locations in the area, including in Cool Insuring Arena and the Lake George Forum.

Last month, another crew was scouting for a movie that looks like it will film in the area, he said.

“It’s going to shoot for 20 days. It’s going to be the same type of economic impact as ‘Spy Intervention,’” he said.

Meader also is in talks with filmmakers interested in shooting a Christmas movie in the area.

“The producers are trying to get the financing lined up. It’s looking more and more a reality for winter 2019,” he said. “It would be a larger budget film than we’ve had in the past.”

Another project that filmed locally within the last year was “Radium Girls.” Meader said the film had its world premiere at the Tribeca Film Festival and was well received. Festival organizers are in talks with the producers to be able to show the film at the Adirondack Film Festival in October.

Meader said another film that was to shoot locally called “Cop Shop,” about a newspaper journalist on the police beat, is still in the pipeline and it comes down to financing and availability of talent.

The commission had been contacted by the producers of a reality show, which Meader did not name, who were interested in filming at a mansion in Lake George as a last-minute alternative location. They planned to be here for 30 days and would bring a crew of 80 people. However, they were able to film at their original location in New Jersey, he said.

“There’s a shore there,” he said, coyly.

Meader said there is the possibility the show could come back in the future.

“They could possibly come up for a weekend,” he said.

Meader pointed out the popularity of these shows.

“Regardless of what you think about reality television or the show, the economic impact is huge,” he said.

Meader said he has been actively recruiting for more films to come shoot in the area.

He recently went to the governor’s New York City office and gave a presentation to location managers and scouts about filming opportunities in the Glens Falls region. Filmmakers had the impression of the Adirondacks being just log cabins and woods and did not think about a city like Glens Falls with Victorian architecture and other attractions.

Filmmakers were impressed with the presentation, according to Meader.

“They were looking for new places to go within New York state,” he said. “It’s a great way to keep us top of mind for a lot of people.”

G7 price cap on Russian oil kicks in, Russia will only sell at market price

This historic crown is being readied for King Charles's Coronation Day

This historic crown is being readied for King Charles's Coronation Day

Los Angeles filmmaker Drew Mylrea stops filming to talk with an actor on set during the filming of ‘Spy Intervention,’ an independent comedy shot last year in Glens Falls and Lake George.

Cast members of the movie ‘Radium Girls’ wait on Glen Street in Glens Falls in October 2016 while the movie’s producer talks to the crew. The film will headline the Adirondack Film Festival this fall.