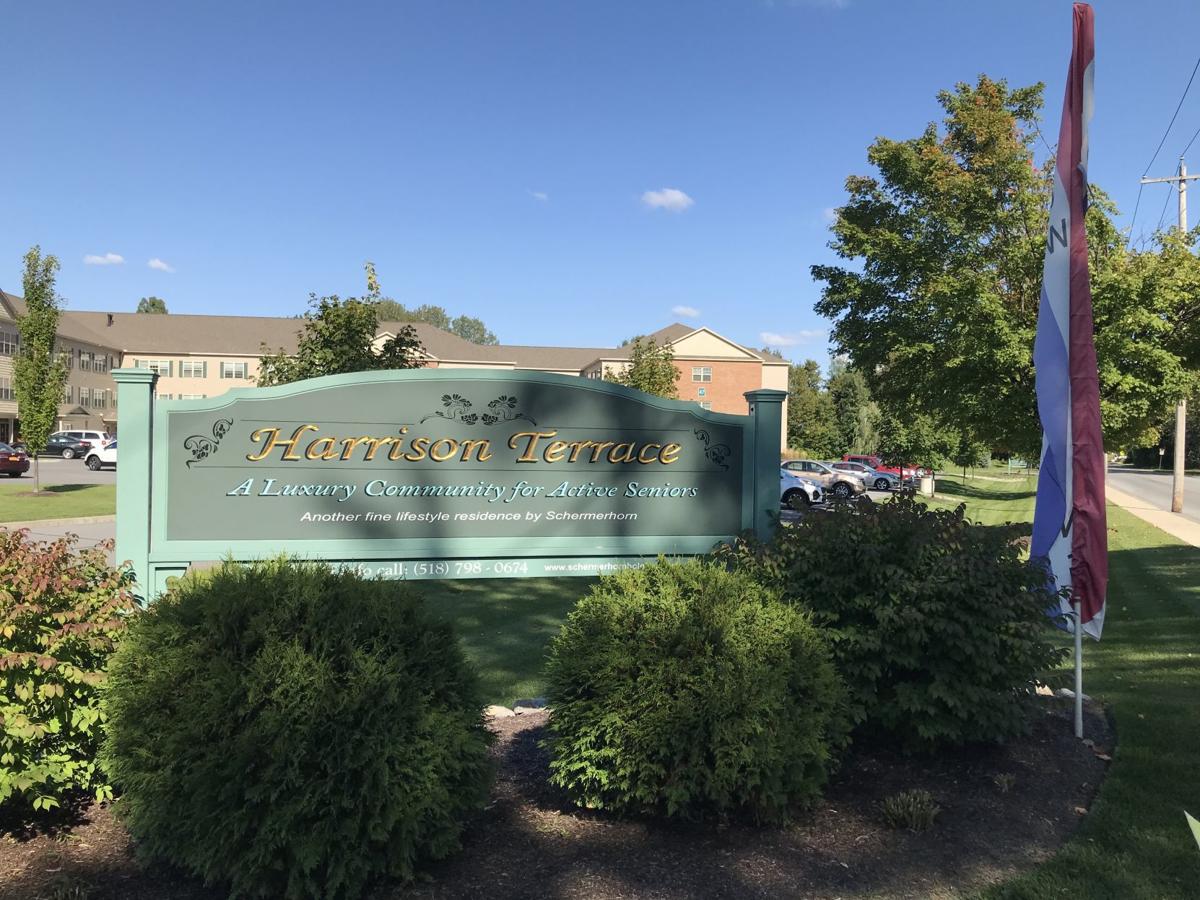 Harrison Terrace, one of developer Richard Schermerhorn's many apartment complexes for seniors, is now open for leases in South Glens Falls.

Workers are building three multifamily projects for developer Rich Schermerhorn off Harrison Avenue in Moreau. In total, he has approval for 428 units, some of which are already built. When they are complete, more than a third of the housing in Moreau will be apartments. 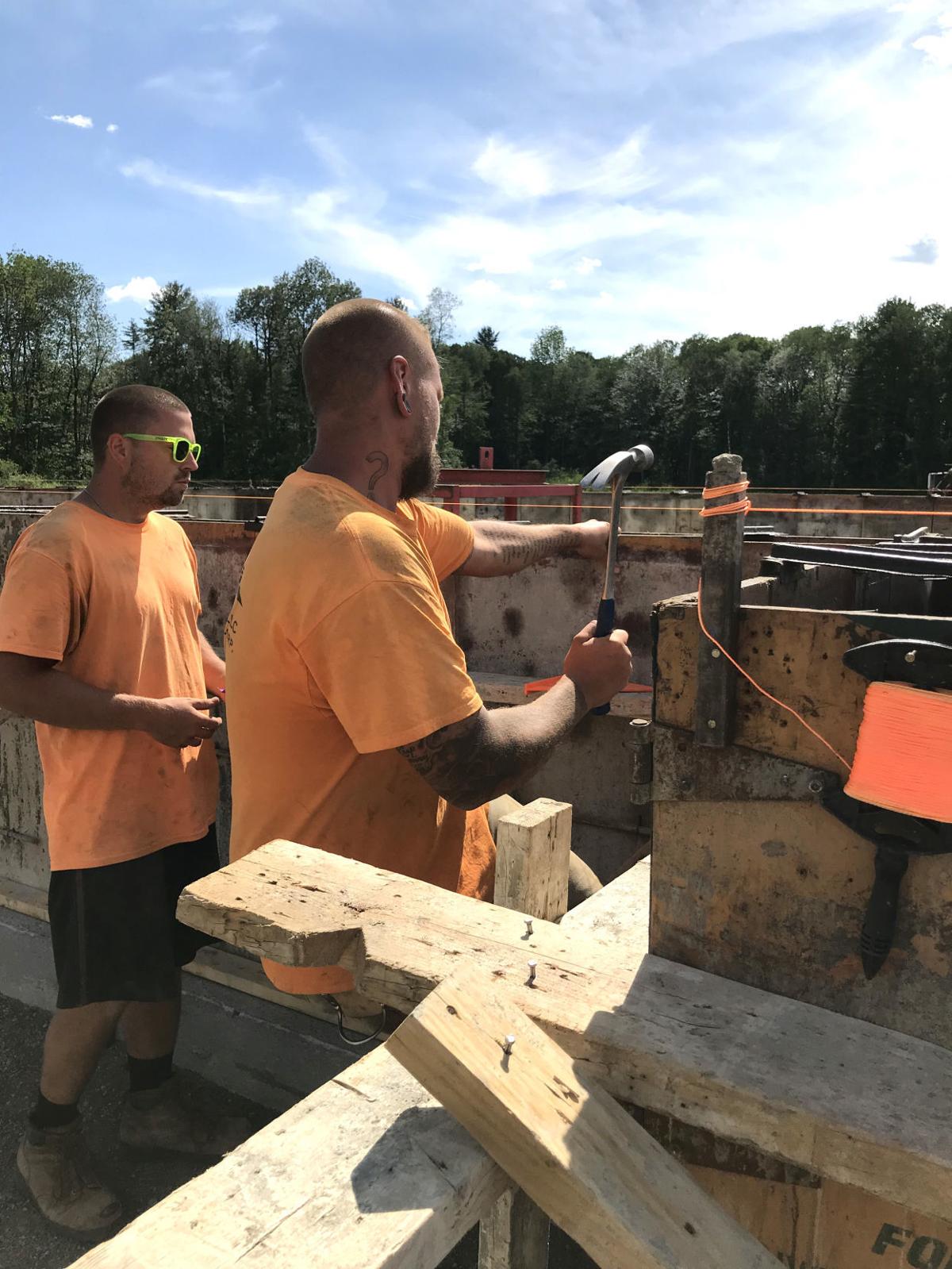 Brandon Friers and foreman Zack Baldwin prepare a frame for concrete to be poured inside at a multifamily housing site in Moreau. The workers from Baldwin & Sons are building one of three multifamily projects for developer Rich Schermerhorn off Harrison Avenue. In total, he has approval for 428 units, some of which are already built. When they are complete, more than a third of the town's housing will be apartments. 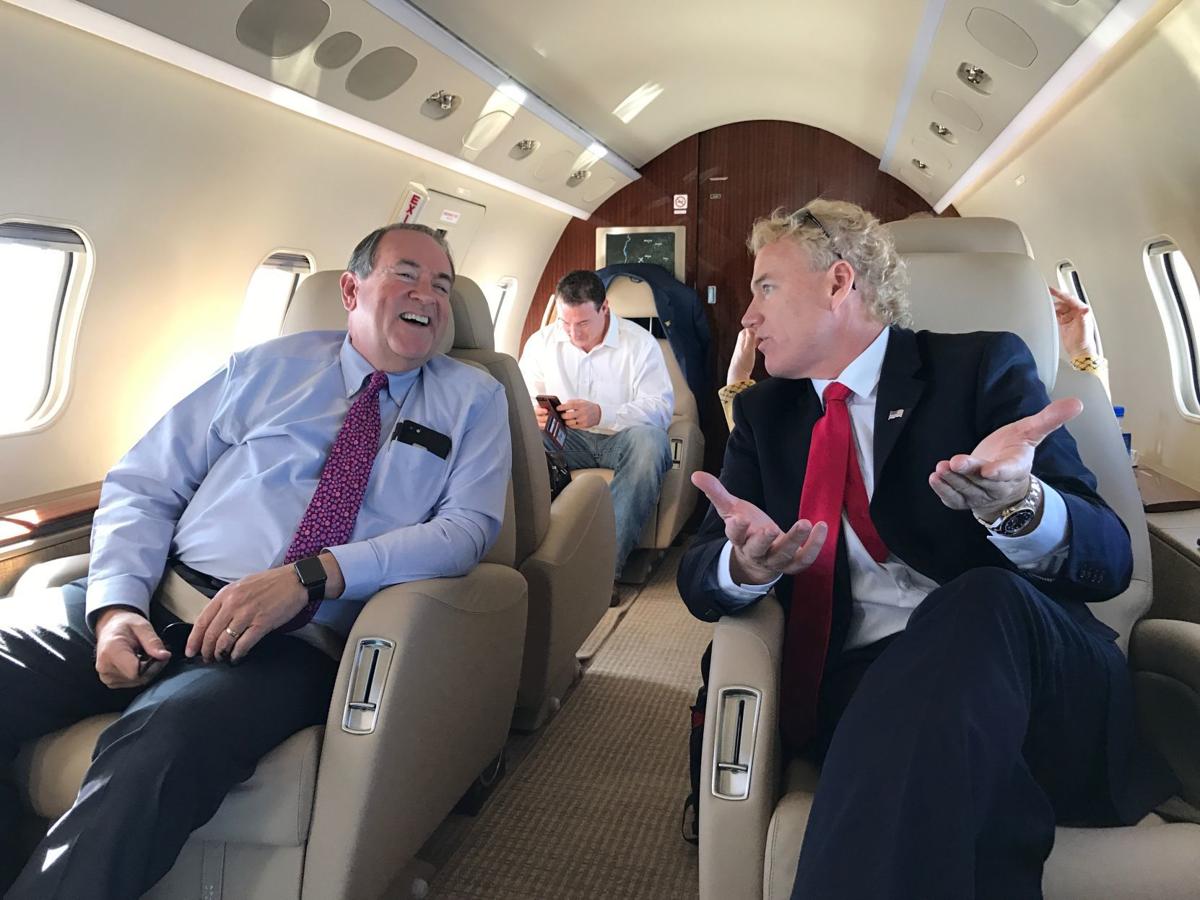 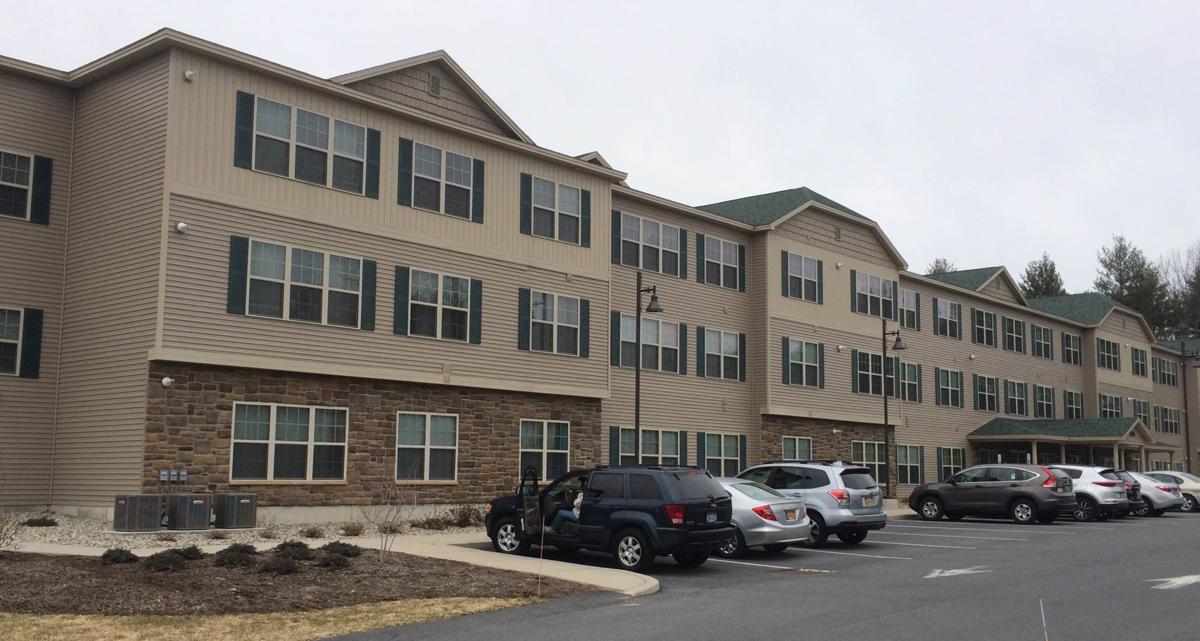 One building of the West Brook Senior Apartments in Queensbury, built by developer Rich Schermerhorn, is seen in April.

The region’s top landlord for seniors has a policy of not letting people out of their leases when they die, unlike other landlords, who said they support the effort to add a state law condemning the practice.

Multiple families contacted The Post-Star to describe what happened when a family member died while renting from local developer Richard Schermerhorn. He owns about 40% of the senior living apartments in Warren County, and also runs many in Saratoga and Washington counties. He did not respond to messages left seeking comment.

They were all told that their family member had broken the lease by dying, and the estate would be billed for the remainder of the lease. In addition, they were told their family member had forfeited the security deposit because the lease was broken, and therefore the deposit would not be used to cover the cost of any damages to the apartment. Families were given a standard packet of information on the issue, including a list of charges for each part of the apartment not cleaned acceptably.

The estates are billed — beyond the security deposit — for each item that isn’t cleaned. A drawer left unwashed is $50. The carpets must be professionally cleaned, with a receipt from the cleaner as proof.

One family was charged $1,000 for not cleaning items to Schermerhorn’s standard.

Another family was told to pay $13,000 for a full year’s lease when tenant Robert Comiskey died one week before his new lease began. He had already signed the next year’s lease.

“We were in shock,” she said. “We were just so rattled. My father was a veteran. He would have been mortified.”

The family cleaned the apartment right away. But Schermerhorn Real Estate Holdings still tried to take out the monthly rent from Comiskey’s bank account for two months.

“Glens Falls National made them put it back in,” she said. “They got one month and the security deposit.”

Still, that was $2,000. Comiskey left enough money in his estate to cover his funeral and leave “a little” for his two daughters, but $2,000 was a meaningful amount of money for the family.

“It’s not like we’re rich,” Moskov said. “And a lot of people, if they have an estate, usually it’s just enough to bury them.”

She argued that Schermerhorn should not keep the security deposit or charge future rent after the family cleans an apartment so it can be rented again.

“It was just shocking that someone who has that much money would do that,” she said. “It’s so greedy.”

Schermerhorn’s practice is not common in the Glens Falls area.

Three other landlords said, when a tenant dies, they let the family out of the lease immediately.

“Because that’s the reasonable thing to do,” said Colonial Gardens office manager Lynn Giordano. “That’s the way it should be.”

In her 14 years as the office manager there, Colonial Gardens has never tried to collect additional rent when a tenant died, she said.

“We don’t sue estates. Never have,” she said.

Families who had a loved one die at a Schermerhorn apartment said the apartments were quickly filled by new tenants, but Schermerhorn was still demanding they pay the entire lease.

Scott Nichols died after a short illness on July 5, 2017. His lease was up the following February. But his family had the apartment cleaned out by the end of the month and it was rented again in August, said daughter Lisa Gereau.

Still, as soon as Nichols died, Schermerhorn employees told Gereau she had to pay his rent.

“My attorney told me to immediately clean out his bank account, because apparently they put a lien on their bank account,” she said.

So she emptied his account and refused to pay.

She also sent her house cleaner to make sure the apartment was clean.

“My dad left his apartment spotless. He lived in it spotless,” she said. “It only took us a few days to clean it out. There was no reason I shouldn’t get the deposit back.”

“For me, it’s a small amount of money. It’s just the principle. You can bury your loved one with $3,000,” she said, referring to the larger amounts paid by others who also paid additional months’ rent.

Her father left her a binder, showing exactly what to do to settle his estate after he died. He was proud of his planning and organization. But he never knew he would owe the rest of his lease, she said.

“He would have been livid,” she said.

Moskov said her father never realized that, either.

“If he knew that would’ve happened, he would never have rented from them,” she said. “I understand when people skip out on the rent, but he died. To say he broke the lease? He died!”

Rich Schermerhorn owns many hundreds of apartments in dozens of complexes throughout the area, although it's a challenge to put exact figures on his holdings.

In 2015, a Post-Star story reported he had developed about 25 complexes with more than 1,500 units. Since then, the paper has reported on his development of several more housing complexes.

His company's website lists 22 separate developments, but it appears not to be a comprehensive list of Schermerhorn's properties.

Schermerhorn Holdings website lists six "active senior communities," with more than 300 units altogether, as follows (number of units are estimates based on various sources and may not be exact):

In addition, stories have mentioned three other senior complexes either being developed or built by Schermerhorn:

Schermerhorn Holdings website lists 16 other housing complexes, with an estimated total of more than 1,200 apartments or townhomes:

EDITORIAL: Knowing rights can pay off for tenants

Here's my personal top five stories of the year - stories I covered that were fascinating, horrible, or eye-opening.

No. 9: Not even death gets you out of paying rent

Many former and current tenants of Schermerhorn properties spoke out about the company's policies, following a story about a man's estate being charged for the remainder of his lease after he died.

I Think Not with Will Doolittle

Blog: Expanding on the Schermerhorn story

In Thursday's paper, my column laid out the story of Charles Stoddard, first reported by Mark Mulholland at WNYT-TV NewsChannel 13. Mr. Stodda…

Column: At Schermerhorn units, no way to escape the rent

Rich Schermerhorn flies around in his own jet. A few years ago, he flew down to the Westchester airport to pick up Rudy Giuliani and his wife …

Bill would allow for termination of dead tenants' leases

GLENS FALLS — Assemblyman Dan Stec hopes his bill, allowing for residential leases to be terminated upon the death of a tenant, will be incorp…

Lawyer: Security deposit can't be docked for cleaning by landlords

Landlords cannot dip into the security deposits of tenants who fail to perfectly clean their apartments when they leave, said Stuart Kaufman, …

After double-charging rent, Schermerhorn Real Estate Holdings acknowledged the problem but refused to correct it until The Post-Star called.

The Post-Star has been honored for the ninth time with the New York State Associated Press Association’s Newspaper of Distinction honor.

Harrison Terrace, one of developer Richard Schermerhorn's many apartment complexes for seniors, is now open for leases in South Glens Falls.

Workers are building three multifamily projects for developer Rich Schermerhorn off Harrison Avenue in Moreau. In total, he has approval for 428 units, some of which are already built. When they are complete, more than a third of the housing in Moreau will be apartments.

Brandon Friers and foreman Zack Baldwin prepare a frame for concrete to be poured inside at a multifamily housing site in Moreau. The workers from Baldwin & Sons are building one of three multifamily projects for developer Rich Schermerhorn off Harrison Avenue. In total, he has approval for 428 units, some of which are already built. When they are complete, more than a third of the town's housing will be apartments.

One building of the West Brook Senior Apartments in Queensbury, built by developer Rich Schermerhorn, is seen in April.