The U.S. Environmental Protection Agency will not assist New York with smog pollution from upwind states, it announced on Sept. 20.

The decision, signed by Administrator Andrew Wheeler, could be problematic for the Adirondack Park, which has been on a decades-long recovery from air pollution and acid rain.

The state petitioned the EPA in March 2018 to enforce a part of the Clean Air Act called The Good Neighbor provision. It stipulates that the EPA enforce pollution controls on coal-fired power plants upwind from states whose air quality is being negatively affected.

The EPA said in its decision that it did not independently find, and New York did not convince it, “that the group of identified sources emits or would emit in violation of the good neighbor provision.”

The determination ends a lengthy investigation that included a comment period and public hearing. The EPA said in its 171-page decision that it received 44 written comments.

The Adirondack Council and the Environmental Defense Fund sent out a joint press release Tuesday night, condemning that EPA’s decision.

“EPA’s decision means New Yorkers face an increased risk of serious illnesses, and Americans in all downwind states have another reason to believe EPA will not protect their health,” said Graham McCahan, senior attorney for the Environmental Defense Fund, in a news release. “States that are working hard to clean up their air are at the mercy of their more-polluting neighbors, and EPA is shirking its duty to help them.”

William Janeway, executive director of the Adirondack Council, said in a news release that the same upwind industrial sources cause acid rain in the Adirondacks. Janeway reminded the public how acid rain had “killed fish and forests and contaminated the food chain with mercury.”

“The EPA’s refusal to enforce the smog rules means more acid rain damage in the Adirondacks,” Janeway warned. “EPA has a moral and legal obligation to honor New York’s petition for relief from this pollution.”

The EPA’s decision comes among a number of environmental rollbacks in favor of the business community.

Earlier this month, the Trump Administration repealed a 2015 rule around “waters of the United States” that put strict federal regulations on things like streams and wetlands. 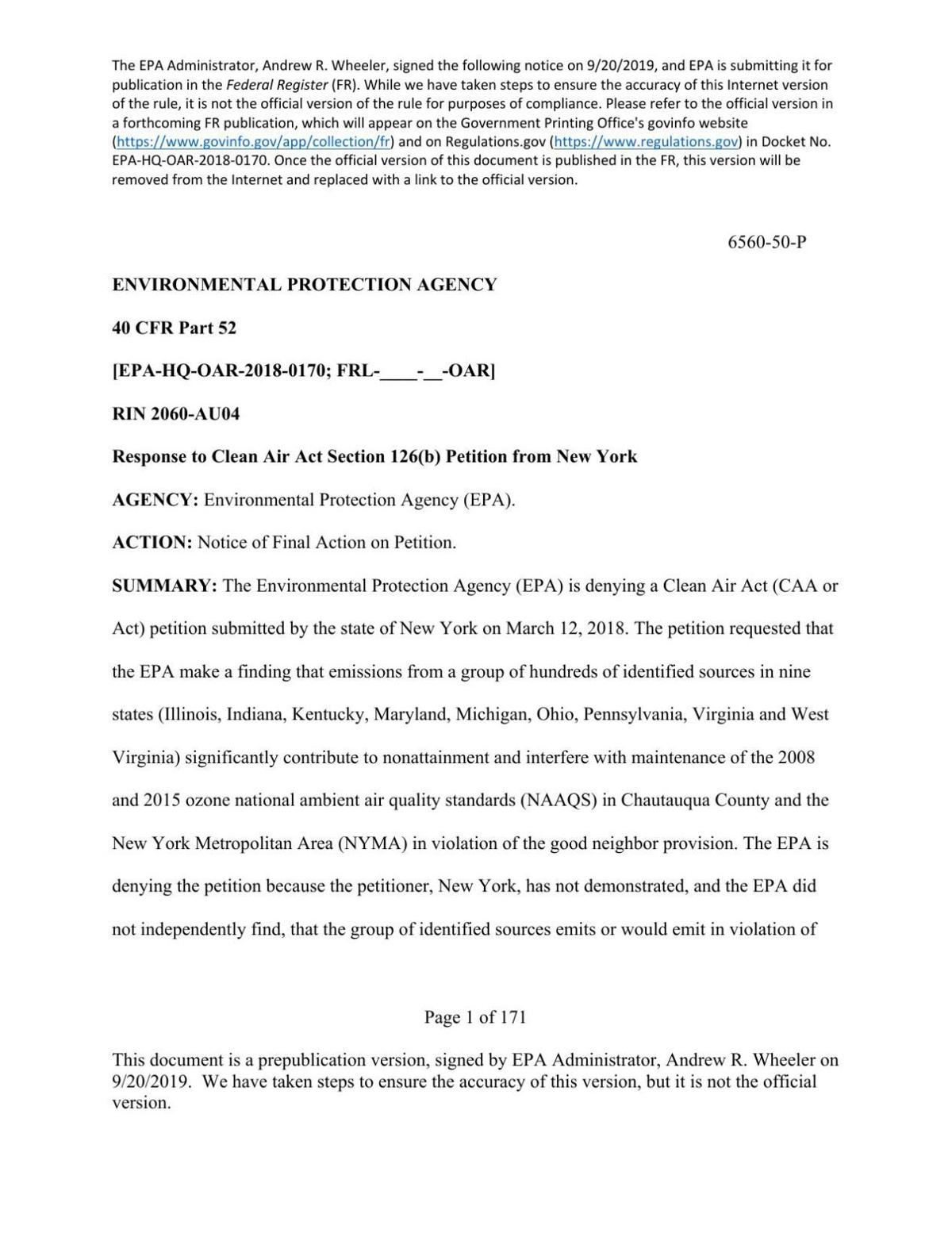 WASHINGTON — The U.S. Court of Appeals for the District of Columbia upheld the Cross State Air Pollution Rule, which regulates states’ polluti…

The U.S. Environmental Protection Agency has released a “proposed decision” that denies New York’s petition requesting a finding that industri…

GLENS FALLS — Loons and eagles are back in the Adirondacks. So are trees and fish. The air is fresher. The water is cleaner.

About 9.4 million New Yorkers are breathing in unhealthy air, according to the American Lung Association, some of it due to smog from neighbor…

Blog: State to EPA: 'Quit cozying up to polluters'

A federal district court in New York and Maryland ruled earlier this year that the U.S. Environmental Protection Agency failed to protect citi…

A federal district court in Manhattan ruled this week that the U.S. Environmental Protection Agency didn’t do its job regulating air pollution…

Scientists say federal rollbacks are not impacting acid rain in Adirondack Park, yet

Scientists studying acid rain on Whiteface Mountain say things have never been better in the Adirondacks, and the Adirondack Council made a pr…

U.S. Rep. Elise Stefanik, R-Schuylerville, is asking the Trump administration to enforce a rule in the Clean Air Act that mandates that pollution from coal-fired power plants not affect other states.

WH 'refining plans for all scenarios' in Ukraine

WH 'refining plans for all scenarios' in Ukraine