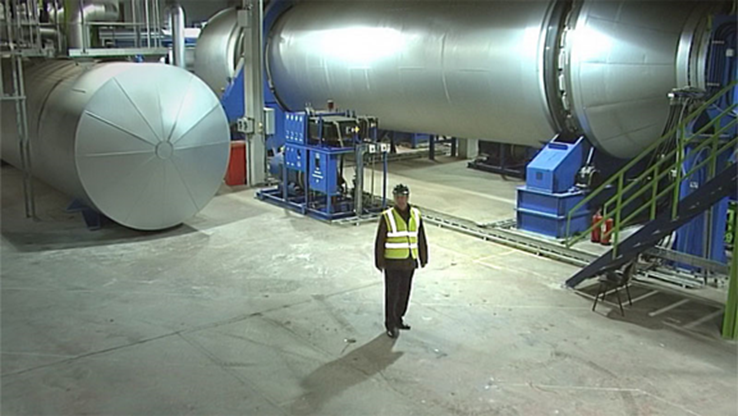 Hughes Energy's proposed plant would use autoclave technology (pictured here) alongside a steam boiler. Invented by Charles Chamberland in 1879, the autoclave vat as used by Hughes Energy would apply steam and pressure at a low temperature (166 degrees Celsius, 330.8 degrees Fahrenheit) to sanitize waste without burning or melting it. 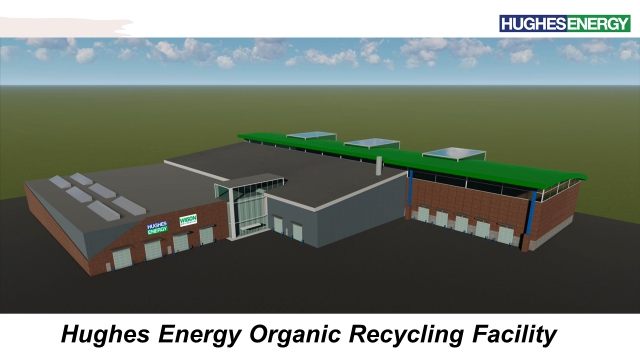 This image depicts what the Hughes Energy trash-processing plant would look like. Using autoclave technology, the company would process about 175,000 tons of garbage per year to extract fiber to then be sold to paper mills. 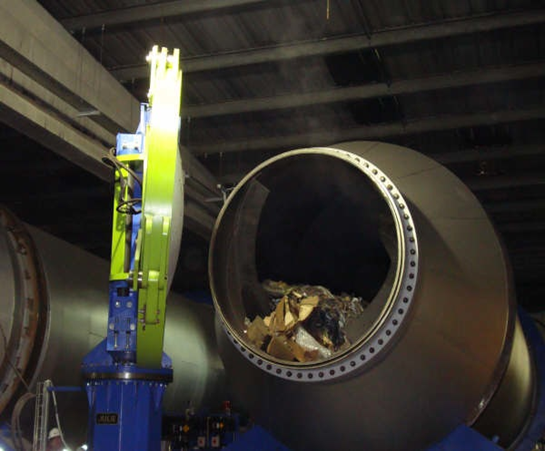 A close-up view of an autoclave with an open door. The device is used to sanitize waste, which will then eventually be processed to extract fiber.

FORT EDWARD — A clean-tech company named Hughes Energy is considering purchasing land at the dewatering site in Fort Edward as a potential site for a new trash processing plant.

While the plans are nowhere close to completion, there was an ongoing discussion between Hughes Energy representatives and the Warren-Washington Industrial Development Agency in November.

The proposal has raised concerns from an environmental group and some local residents.

The Warren-Washington IDA, which owns the parcel of land, has been searching for new tenants to take over the former General Electric Co. dewatering site used during the Hudson River dredging project.

The proposed trash plant, which Hughes Energy calls an organic recycling facility, would use autoclave technology: a huge metallic vat that steams garbage under high pressure in order to remove biohazardous chemicals. According to Hughes Energy’s website, the company would process “unwanted organic materials: food scraps, paper, cardboard, agricultural waste, and other organics.”

Dane McSpedon, CEO of Hughes Energy, said the company would need a loan of upward of $90 million to kick this project off.

“We are absolutely exploring the town and community of Fort Edward,” McSpedon told a Post-Star reporter this week.

While there was an ongoing discussion between McSpedon’s team and the Warren-Washington IDA in late 2021, as of earlier this week, David O’Brien, chair of the IDA, said: “There is no commitment.”

O’Brien made it clear that there was no deal on the table and no meetings were planned in the foreseeable future.

Although it remains unclear if Hughes Energy will move ahead with the project, McSpedon said there had been some informal meetings between the two entities.

The operations at the proposed plant would extract fiber from mixed municipal waste using autoclave technology. That fiber would then be sold to paper mills to make low-grade paper products, such as cardboard. The fiber extracted from the organic waste through high-speed steam explosion will not be acceptable for very fine paper, according to McSpedon.

Washington County isn’t the only area that Hughes Energy is considering. A proposed site in Delaware County is further along in the process of Hughes Energy acquiring a permit for its Grand Gorge location. Part of this process includes a study of the surrounding area by the state Department of Environmental Conservation to make sure the plant complies with state regulations.

“We are trying to do a good thing for the environment,” McSpedon also said. “Why chop down trees, when you can cook trash to extract fiber for recycled paper?”

In a meeting held virtually on Nov. 11 between Hughes Energy and the Clean Air Action Network of Glens Falls, some concerns were raised as to what the plant operations may entail. IDA members were also present.

“This is a very problematic proposal, and it’s not going to work,” Judith Enck, former regional EPA administrator, said in a follow-up conversation.

“I’m not against technological innovation and progress. If you really want to recycle paper, then what you should do is contract with the haulers, take the paper and the cardboard, and keep it source separated. You don’t have to autoclave it, and you send it to a paper mill,” Enck said in the meeting.

One of the leading concerns raised by CAAN is where exactly this trash would come from. Is there enough waste generated in the immediate area to justify another trash-processing plant?

“It appears right now there is ample capacity for the waste of surrounding counties, and we believe it is quite likely that you would have to import waste,” Tracy Frisch, organizer and head of CAAN, said in the meeting.

According to a recent news release issued from CAAN, the proposed plant would process about 465 tons of garbage a day, which would amount to approximately 170,000 to 175,000 tons per year.

“It would be a.) costly, and b.) it would be aggressively opposed by most residents of the area — plus, we already have a trash incinerator in the next community,” stated Frisch, referring to the trash-burning plant in Hudson Falls.

McSpedon, at the Nov. 11 meeting, responded by saying, “I think it’s important to understand, we are not an incinerator. Our system is a steam-based system which will compost organic material.”

Other discrepancies arose during the meeting, such as the language surrounding Hughes Energy’s mission statement. Members of CAAN were adamant in the fact that what this plant would propose to do is not composting. McSpedon then amended his original statement describing the process and said, “it is not composting, it is high-speed steam explosion of the organic material.”

Miles of trucks hit the Northway in honor of Alex Bleickhardt

Truck drivers from across the state gathered in Wilton Saturday morning to honor Alex "Hillbilly" Bleickhardt, who was recently killed by a drunk driver while on the job.

Hughes Energy's proposed plant would use autoclave technology (pictured here) alongside a steam boiler. Invented by Charles Chamberland in 1879, the autoclave vat as used by Hughes Energy would apply steam and pressure at a low temperature (166 degrees Celsius, 330.8 degrees Fahrenheit) to sanitize waste without burning or melting it.

This image depicts what the Hughes Energy trash-processing plant would look like. Using autoclave technology, the company would process about 175,000 tons of garbage per year to extract fiber to then be sold to paper mills.

A close-up view of an autoclave with an open door. The device is used to sanitize waste, which will then eventually be processed to extract fiber.