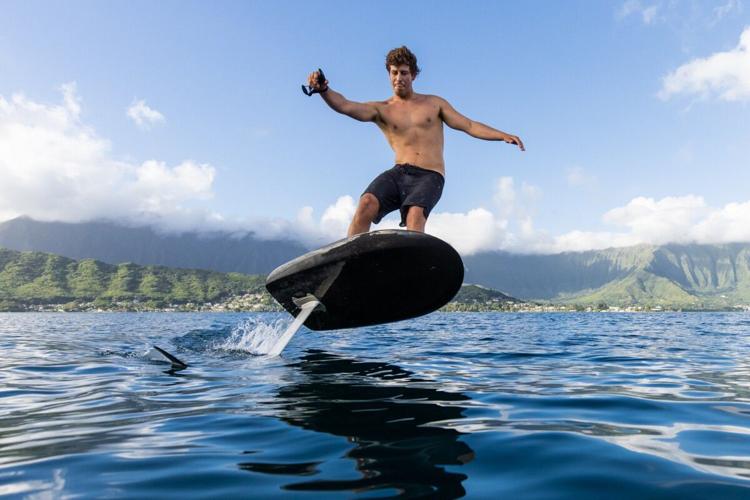 A one-year pilot program for a new business has been approved to allow for electric surfboard (E-foil), as seen here, lessons on Lake George. 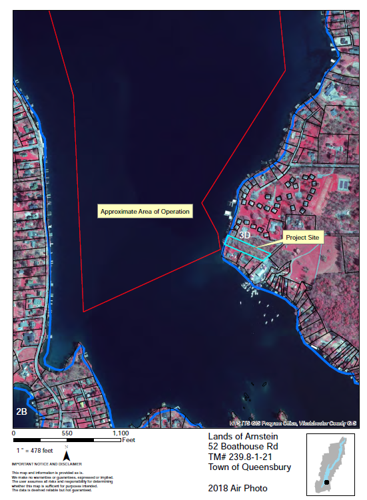 Red lines mark the area where electric surfboards, or E-foils, would be allowed under a one-year pilot program in the Harris Bay area of Lake George.

A one-year pilot program for a new business has been approved to allow for electric surfboard (E-foil) lessons on Lake George.

An E-foil is a surfboard with an electric motor that flies above a hydrofoil wing, allowing riders to hover above water.

Ted Arnstein, with Studio A Landscape Architecture and Engineering, proposed to use his property at 52 Boathouse Road in Harris Bay as a marina that offers private E-foil training lessons.

This project was first approved by the town of Queensbury last fall, according to a Jeff Anthony, vice president of Studio A.

On Tuesday, Arnstein’s proposal was once again approved during a Park Commission meeting.

Anthony, who was representing the applicant at the meeting, explained to the commission that the boards are similar in size to a wakeboard and were battery-operated, without using or emitting fossil fuels, and create minimal noise.

According to Anthony, property owner Arnstein has a partnership with Aiden Switzer, who would be the operator of the marina and conduct training sessions.

He described the proposed marina as a “teaching facility or education center for E-foils.”

Switzer would be the only employee of the facility and would conduct indoor training and safety lessons before launching off the on-site dock with the students by appointment only. Anthony said only the trainer and one to two students would be on the water at one time.

Commissioner Bill Mason recused himself from discussion and voting on the matter as a neighbor of the proposed site and member of a homeowners association in Harris Bay, with a “huge financial interest in keeping the members happy.”

The packet of information included with the proposal detailed emails and letters the commission received from the residents of Cleverdale, many of whom oppose the operation.

Harris Bay property owner Joan Smith expressed concern for the proposed marina creating an increase in traffic in the small section of the lake.

Smith stated that allowing a commercial marina to operate on a residential property would take away from the quiet community surrounding it.

William O’Loughlin, a member of the Takundewide Homeowners Association, sent an email to the commission with a bullet-pointed list of negative impacts that approval of the project would cause.

Many other members of the homeowners association wrote the commission in disapproval of the project, many citing the boat traffic that already occupies the bay during the summer season, including use by the Lake George Boat Company and the Harris Bay Yacht Club.

The project was ultimately approved 6-0 by the commission, with Mason’s recusal, despite pushback from the residents of Harris Bay.

A one-year pilot program for a new business has been approved to allow for electric surfboard (E-foil), as seen here, lessons on Lake George.

Red lines mark the area where electric surfboards, or E-foils, would be allowed under a one-year pilot program in the Harris Bay area of Lake George.