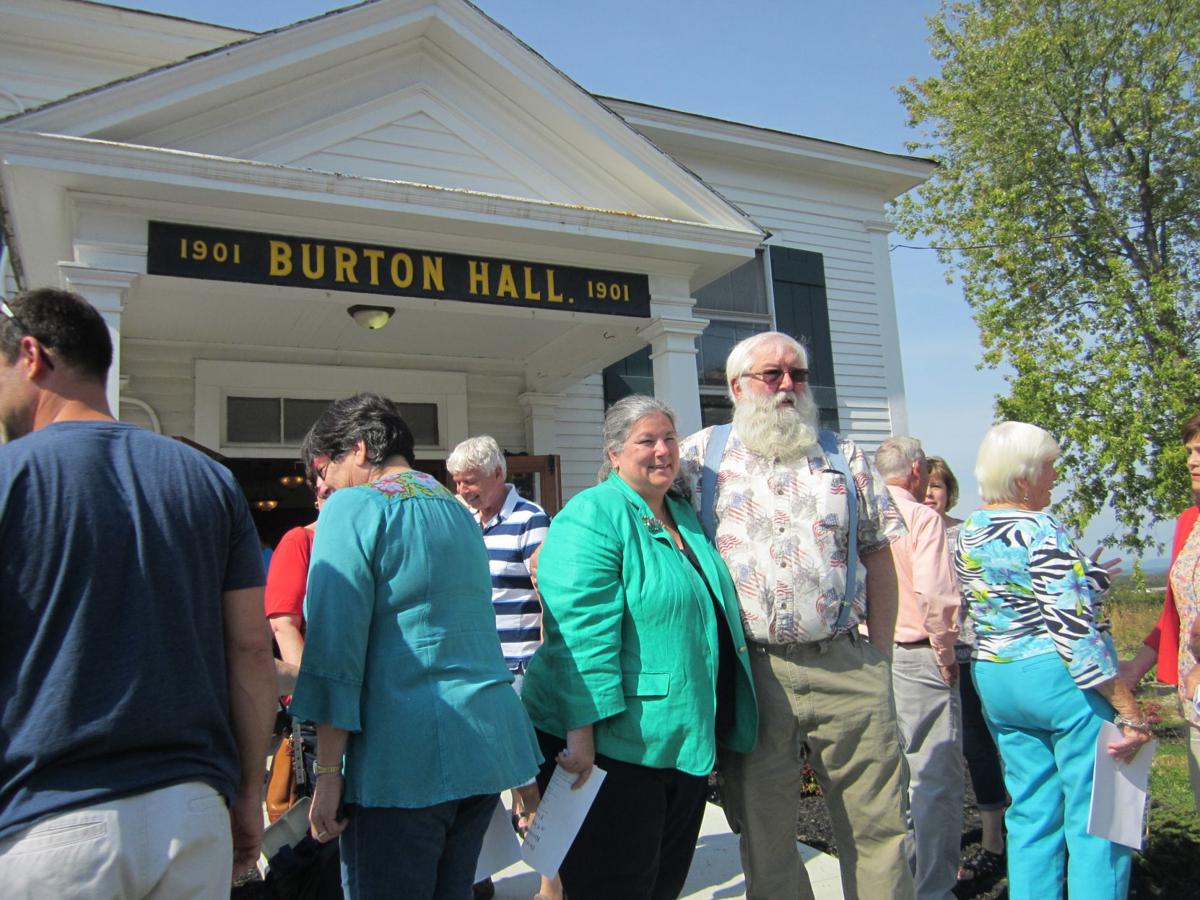 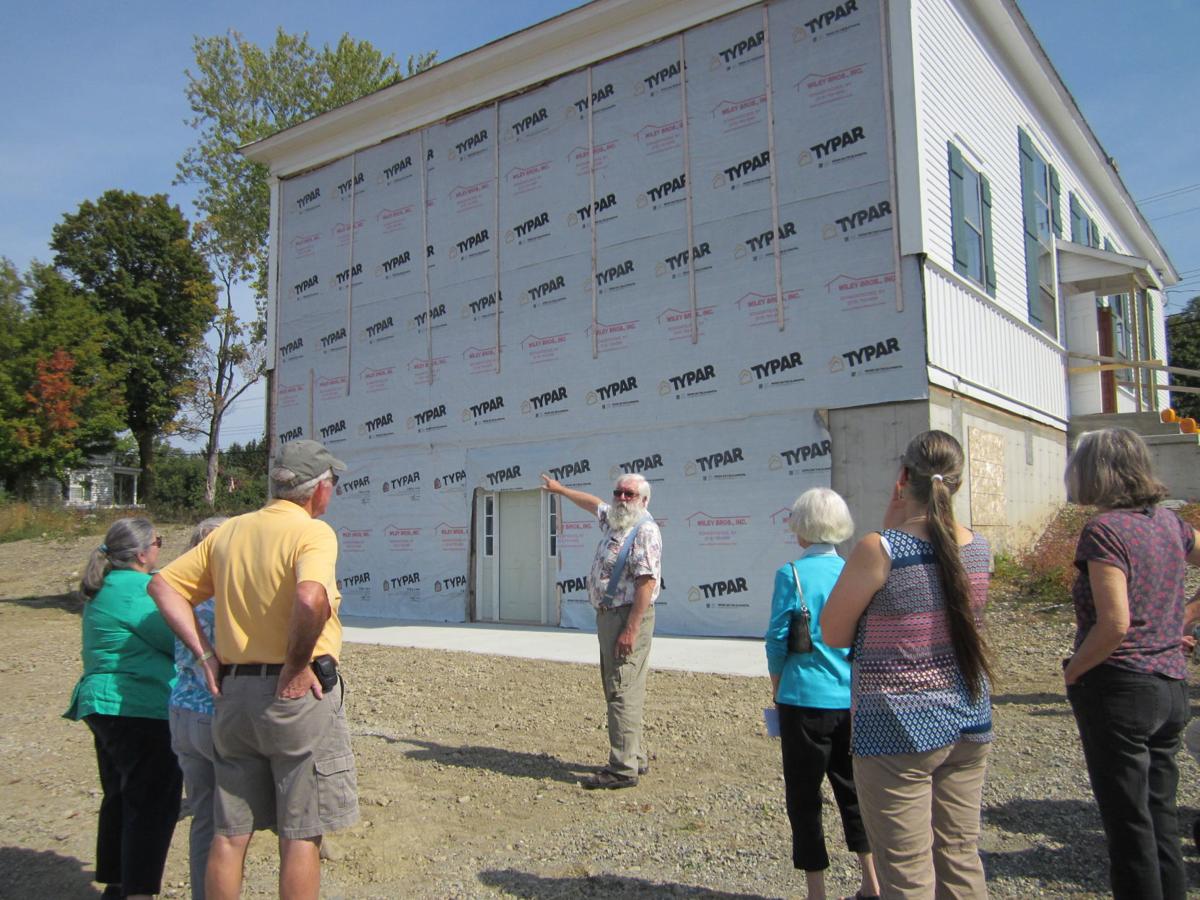 Easton Town Supervisor Dan Shaw explains work that was done on the back of Burton Hall during renovations this summer, and what remains to be done. 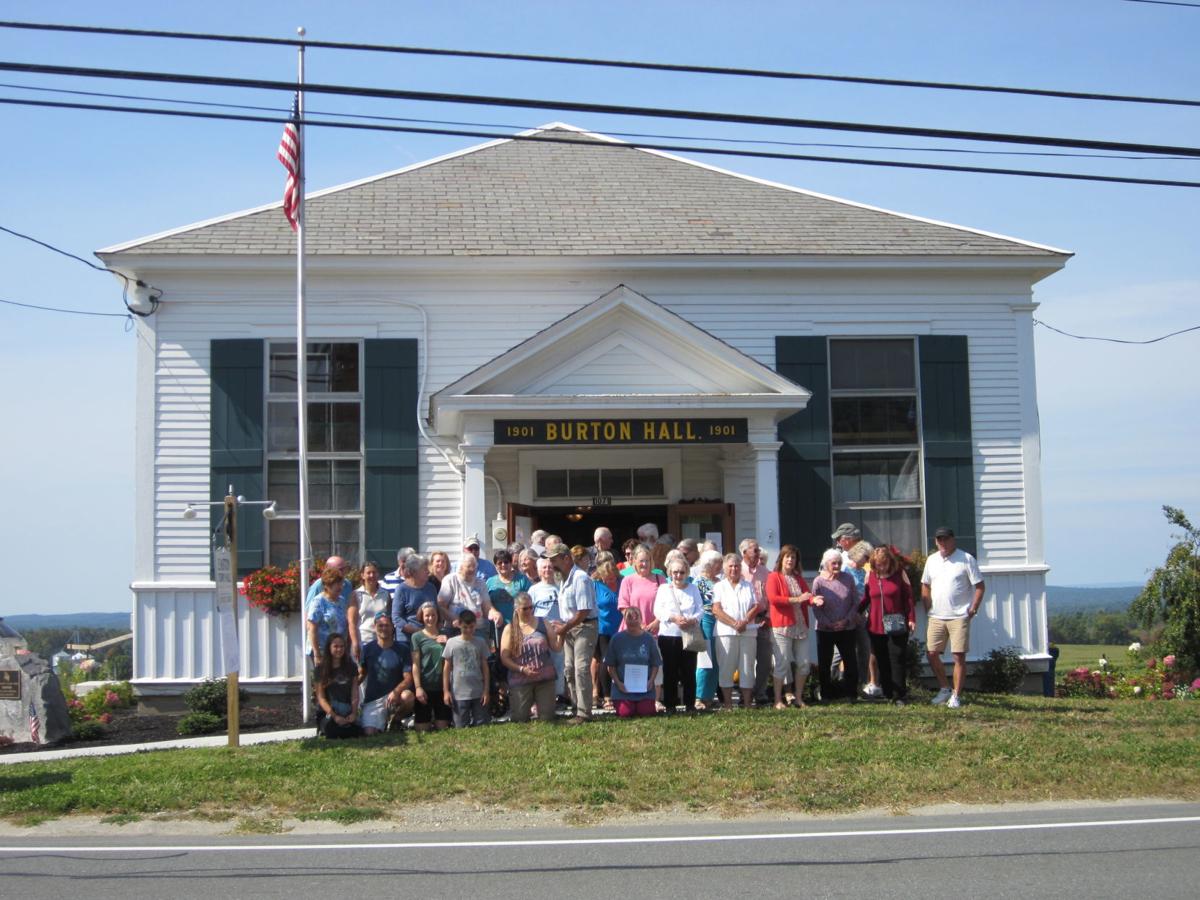 Easton residents and friends gathered in front of Burton Hall Sunday to celebrate the hall's rededication. The photo replicates one taken at the hall's opening on Sept. 4, 1901. 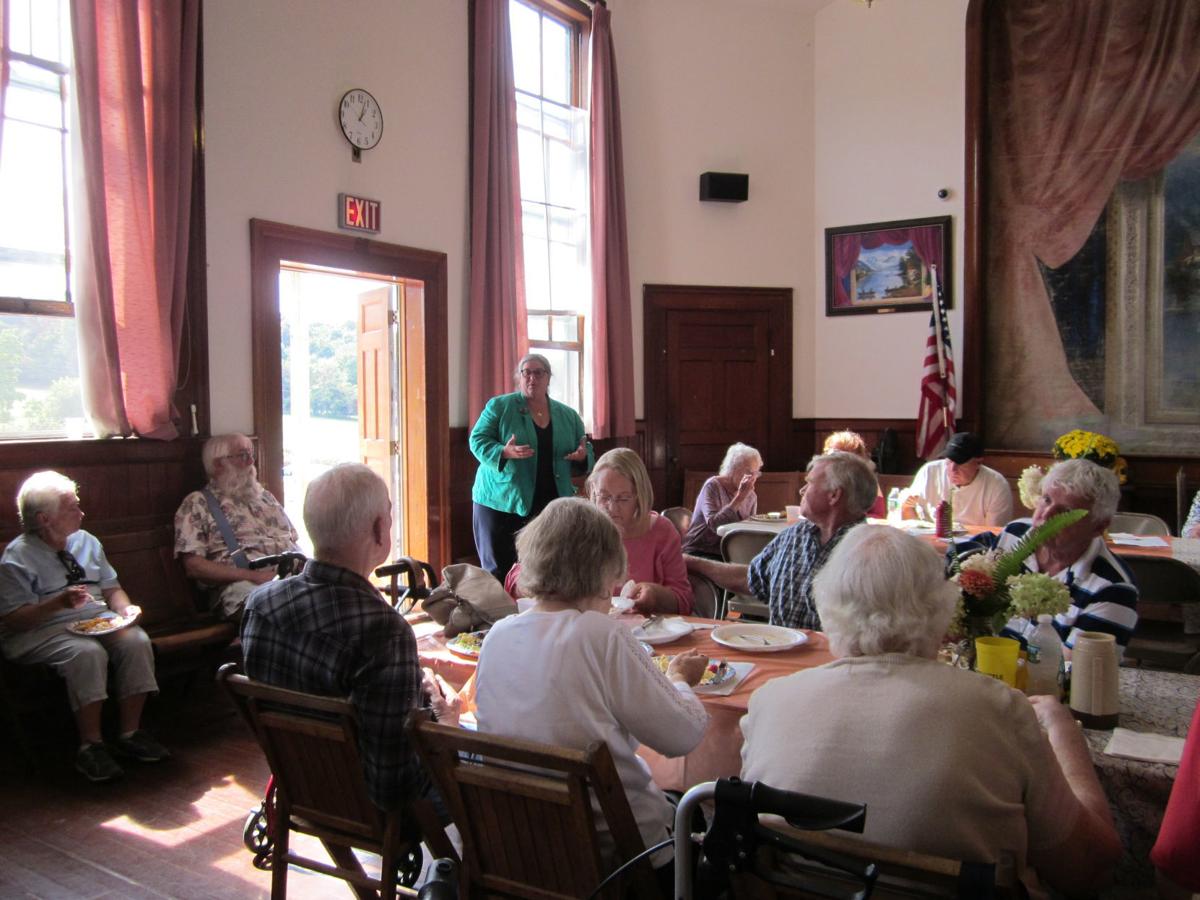 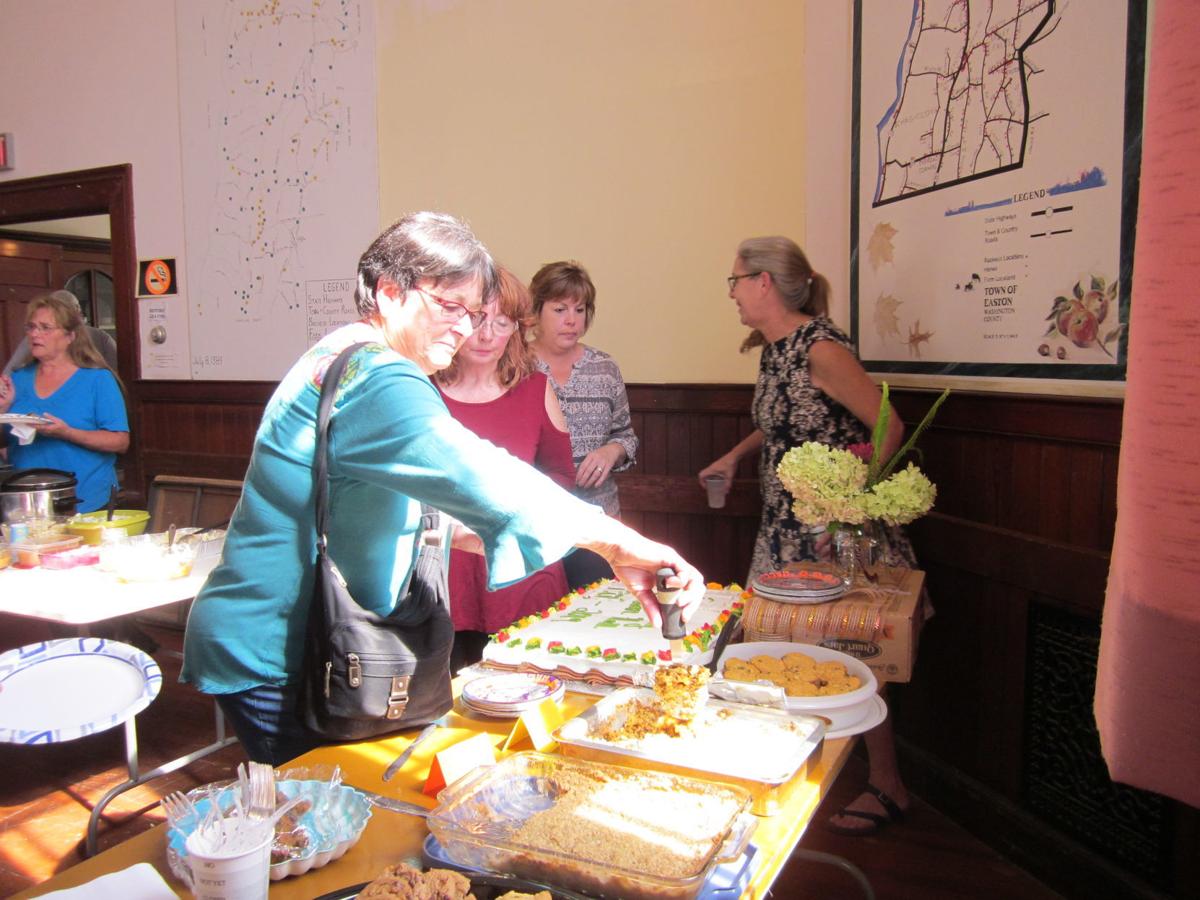 EASTON—One hundred eighteen years and 18 days after Burton Hall was dedicated, Easton residents gathered to celebrate the completion of the first phase in its renovation and rededicate the hall as a center for community life and town business.

“It will be restored to its original purpose as a community space,” said Town Historian Meghan Phalen.

About 40 town residents met Sunday for a celebratory photograph which replicated the one taken on Sept. 4, 1901, a tour of the building, a potluck lunch and pig roast, brief speeches, music, and a retelling of the White Feather of Peace story, which took place in 1777 at the Quaker meeting house a few miles away.

Burton Hall, named after donor Isaac A. Burton, has been used for community meetings, performances, dinners, parties, town business and offices, and as a polling place since its opening. In its early years the town library occupied a front room.

The town received $125,000 in state funds from Assemblywoman Carrie Woerner, $60,000 from former State Senator Kathy Marchione, and $10,000 from the New York State court system for a handicapped-accessible restroom, Shaw said. The town had $122,000 in its building fund, allowing the project to begin.

Shaw took visitors around the building to show off the work to date. Raising the building solved drainage problems from Route 40 (the road was originally lower). The rear of the building was reconstructed. A new entrance there to the lower level will match the front entrance. The unfinished downstairs will hold town offices, town court, the judge’s chamber, offices for the public defender and district attorney, restrooms, and storage. Having all town functions on one level will spare the town the expense of installing an elevator, Shaw said.

The town moved the septic system and installed a propane heating system. Air conditioning will circulate air on the ground floor. Plans include a new parking lot in the rear, a lawn, and park benches overlooking the Hudson River Valley. “This is a view you can’t see anywhere else but Easton,” Shaw said.

The town board includes an engineer, contractor, and union plumber, Shaw said, and he runs a sawmill. “We’ve probably saved $150,000 by playing general contractor,” he said. The town highway crew donated time to grade around the building and clean up after the contractors. A local family installed the landscaping, he said.

The board will have to make decisions on what to do next, Shaw said. The $65,000 remaining in the building fund will only pay for winterizing the exterior. “Do we go into debt for $200,000 to finish this or do we pick away at it?” he asked. The highway department also needs funds and no one wants to raise taxes, Shaw said.

“Too many communities have lost the buildings that made them special,” Worner said. “This project was important to me and Kathy (Marchione).”

Combining town offices and community rooms should encourage future residents to maintain the hall, Shaw said. “If you put the town offices downstairs, people will have to take care of it,” he said.

Warren County on Saturday confirmed three new cases of COVID-19, which are not related to the outbreak involving passengers on a Florida flight.

Easton Town Supervisor Dan Shaw explains work that was done on the back of Burton Hall during renovations this summer, and what remains to be done.

Easton residents and friends gathered in front of Burton Hall Sunday to celebrate the hall's rededication. The photo replicates one taken at the hall's opening on Sept. 4, 1901.