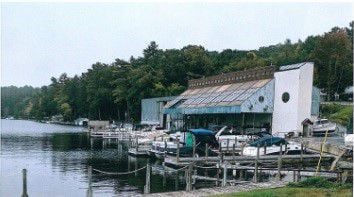 The new owners described Dunham's Bay Marina as "tired," as shown in this photo of the existing conditions. 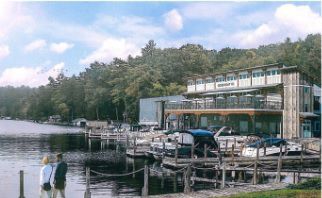 This rendering shows the marina after a deck is added on the second floor, removing part of the existing enclosed second floor. It will be a members-only lounge and bar.

QUEENSBURY — A “tired” marina will be renovated to attract members nationwide.

Dunham’s Bay Marina, now Queen Boat Company, will be part of the Freedom Boat Club franchise. The business allows members to travel and borrow boats at each location they visit.

The new owners told the Planning Board they will make the marina a destination for boaters visiting Lake George.

The marina has 28 docks and no moorings, with 12 rental boats and one tour boat. In winter, it has storage space for 150 boats.

The Planning Board approved the proposal unanimously. Now the owners will take the project to the Park Commission, where it approval is expected. The owners are asking to increase their permit from 12 boats to 20 boats.

The plan includes private boat slips, but most users would borrow the boats held at the marina.

The marina itself will also be renovated, with the second floor being turned into a high-class club lounge and bar. Part of it will be opened to create a deck overlooking Lake George.

Also on the first floor, the building will be renovated into a newer, nicer showroom.

The marina has its own boat-cleaning area, to keep invasive species out.

It also provides gasoline for boats, while following the myriad regulations to keep fuel from leaking into the lake. The new owners are replacing the fuel tank and pump, installing a new septic system and upgrading the stormwater system.

LAKE GEORGE — It’s not just the High Peaks that are struggling with overuse issues.

QUEENSBURY — There have been few constants at Queensbury Town Board meetings over the last decade-plus. But one thing that those who attended …

With entrees named after Granville businesses, selecting dinner at the new Nelson's Family Fare restaurant gets served with a splash of history.

The new owners described Dunham's Bay Marina as "tired," as shown in this photo of the existing conditions.

This rendering shows the marina after a deck is added on the second floor, removing part of the existing enclosed second floor. It will be a members-only lounge and bar.