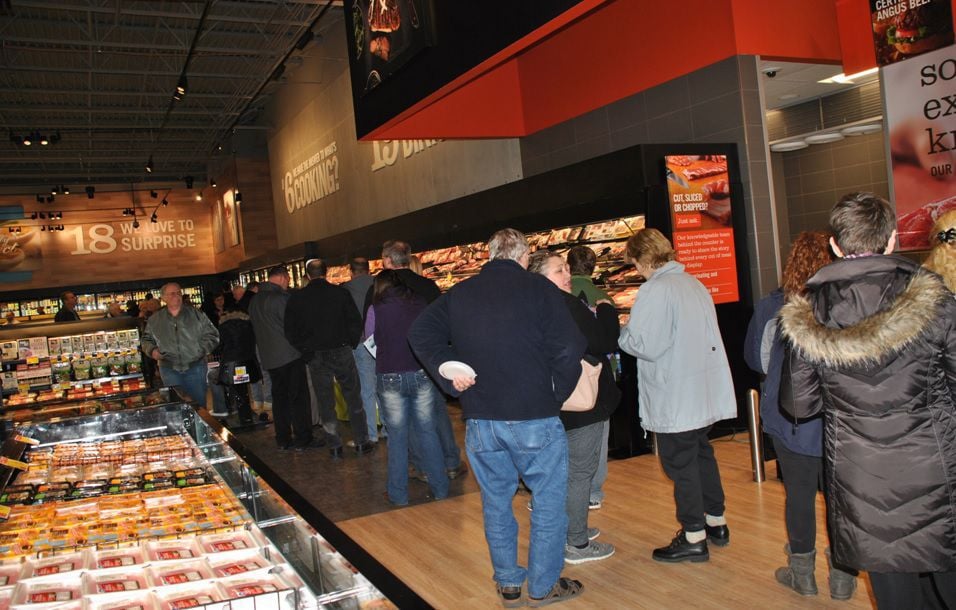 Crowds are seen at the pre-opening of the new Market 32 store in Fort Edward on Monday. The store officially opens Tuesday. 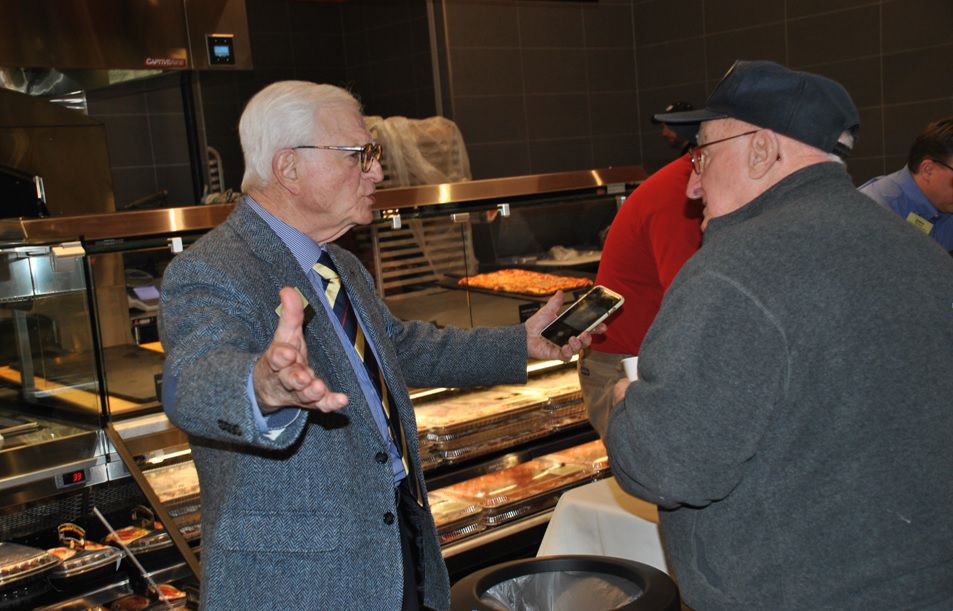 Neil Golub, executive chairman of the board of the Golub Corp., which owns Price Chopper and Market 32, speaks to a customer at the pre-opening of the Market 32 store in Fort Edward on Monday. 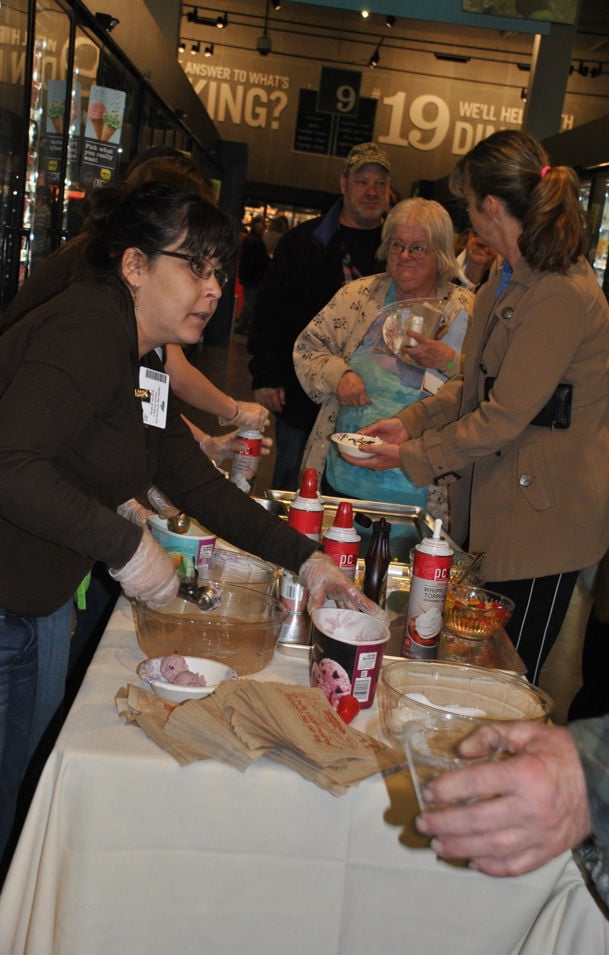 People are seen gathered around one of many of tables offering customers free samples at the pre-opening of the Market 32 store in Fort Edward on Monday. The store officially opens Tuesday.

FORT EDWARD — Neil Golub was working the crowd and loving every minute of it.

Golub, the executive chairman of the board of the Golub Corp., the company that owns Price Chopper and Market 32 stores, walked among the hundreds of people who came to the community pre-opening celebration of the company's newest Market 32 store Monday night.

"This is an amazing turnout," Golub said as he stood in front of long lines of residents getting samples of everything pizza, cookies, meat, cheese, ice cream and other offerings.

As Golub walked down one aisle, he came across two local residents.

"I've planted a flower here," he said, smiling. "Now I just want to see it bloom."

The store was set to officially open at 8 a.m. Tuesday, after an all-night effort by its staff.

"We have hired so many people. It's been great," said Joe Reiser, the store's manager. "Our employees have a strong connection to the community. They have an investment in it."

The community night is a regular event when the company opens new stores, and the Golubs use it as a chance to start giving back to the community.

Those attending the event donated $3,198 at the door, which was matched by the Golub Corp., then matched by the developers of the site, coming to a total of $9,504.

At times it was difficult to see who was more excited about the new store — Golub Corp. officials or local residents and politicians.

"I have believed in this store all along, but to stand here and see all these people is just surreal," said Darlene DeVoe, a village trustee and the main grant writer for the project. "I never realized how many people I know."

Village Mayor Matthew Traver said he was a little worried about the turnout, considering the temperature was hovering at about 10 degrees.

"This is a great turnout," he said, watching hundreds of people stream by. "This is going to be great for the community, and if tonight is any indication, the community is excited about it."

"Never, ever did I think this would happen. I got tired looking at that old building that was here empty for 13 years," he said of the former Grand Union, which closed in 2003. "A lot of work by a lot of people went into this."

The $15 million remediation and construction of the 5-acre parcel at 354 Broadway followed a winding road.

The store will employ about 140 people, with about 20 of them coming from other stores.

Workers from Bast Hatfield Construction were able to complete the store, from the ground up, in less than seven months.

The 42,000-square-foot store was built on a former brownfield site that was cleaned up by a coalition of public and private groups. It was the site of a former Grand Union supermarket.

More than 1,250 tons of contaminated soil were removed from the site.

The town bought the site for $1 from Washington County, which had acquired it for nonpayment of taxes. Fort Edward agreed to take on the cost of cleanup.
David Kaplan, of New York City-based Kaplan Realty, and Bruce Ginsberg, of Ikon Realty in Albany, developed the site and will lease the property to the Golub Corp.
"The energy here is fantastic," said Jerry Golub, the vice president of the board of directors. "This is a wonderful community, and we have been looking at it for a while."

The Fort Edward store is about half the size of the Price Chopper on Glen Street in Queensbury. Golub officials said prices at the two stores will be basically the same.

The store is the first Market 32 in New York state built from the ground up. The others in the state, including one in Wilton, have been converted from previous Price Chopper stores. The company is now working on new stores in Brunswick and Plattsburgh.

The company was founded in 1932, which is why the re-branded stores are called Market 32. The company has more than 130 stores in six states.

You can read Bill Toscano's blog at poststar.com/blogs or his updates on Twitter, @billtoscano_ps.

Prior to 1980: Site used as a gravel pit and capacitor recycling facility, resulting in PCB contamination of soil.

December 2011: First meeting between developers and town of Fort Edward

June 2015: Golub Corp. and the developers announce a Market 32 will be built on the site

Looking back at local history: Jan. 10

Take a look back at local history. Here are the top stories for Jan. 10 from one, five and 10 years ago.

Crowds are seen at the pre-opening of the new Market 32 store in Fort Edward on Monday. The store officially opens Tuesday.

Neil Golub, executive chairman of the board of the Golub Corp., which owns Price Chopper and Market 32, speaks to a customer at the pre-opening of the Market 32 store in Fort Edward on Monday.

People are seen gathered around one of many of tables offering customers free samples at the pre-opening of the Market 32 store in Fort Edward on Monday. The store officially opens Tuesday.