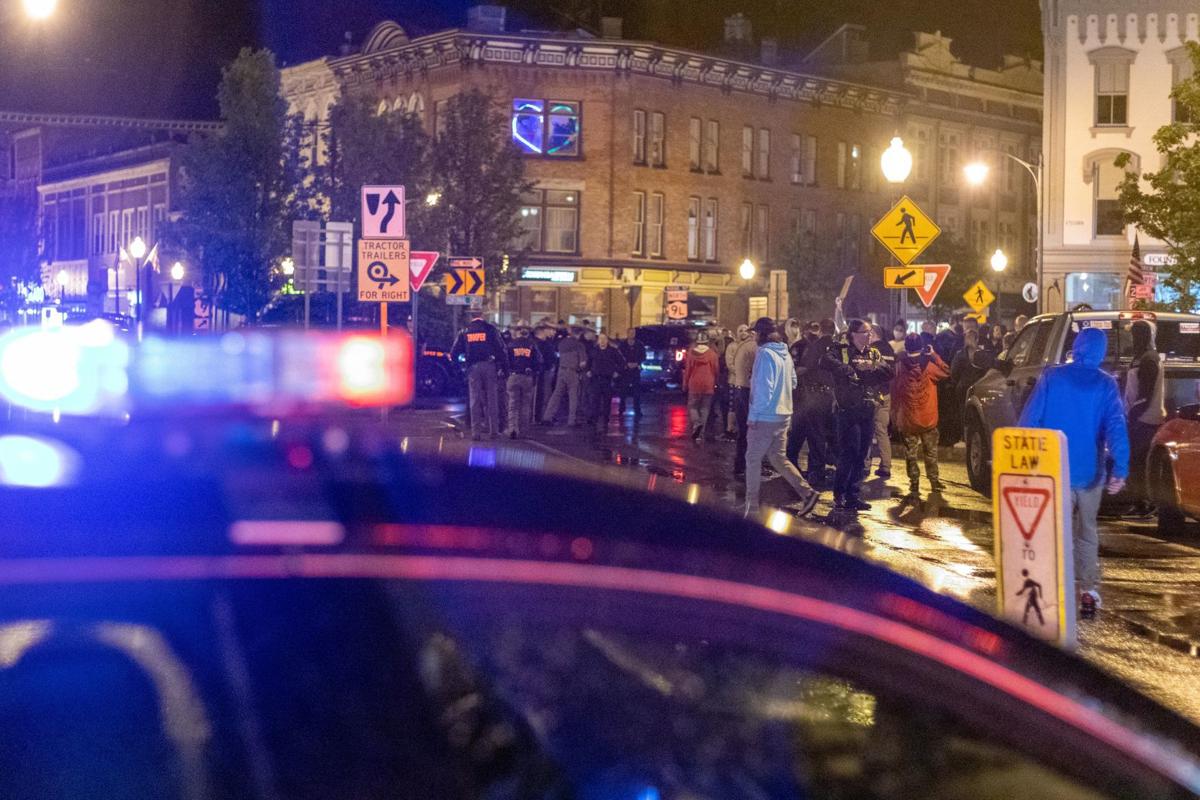 A police vehicle blocks off access to Centennial Circle in Glens Falls on Sunday night. 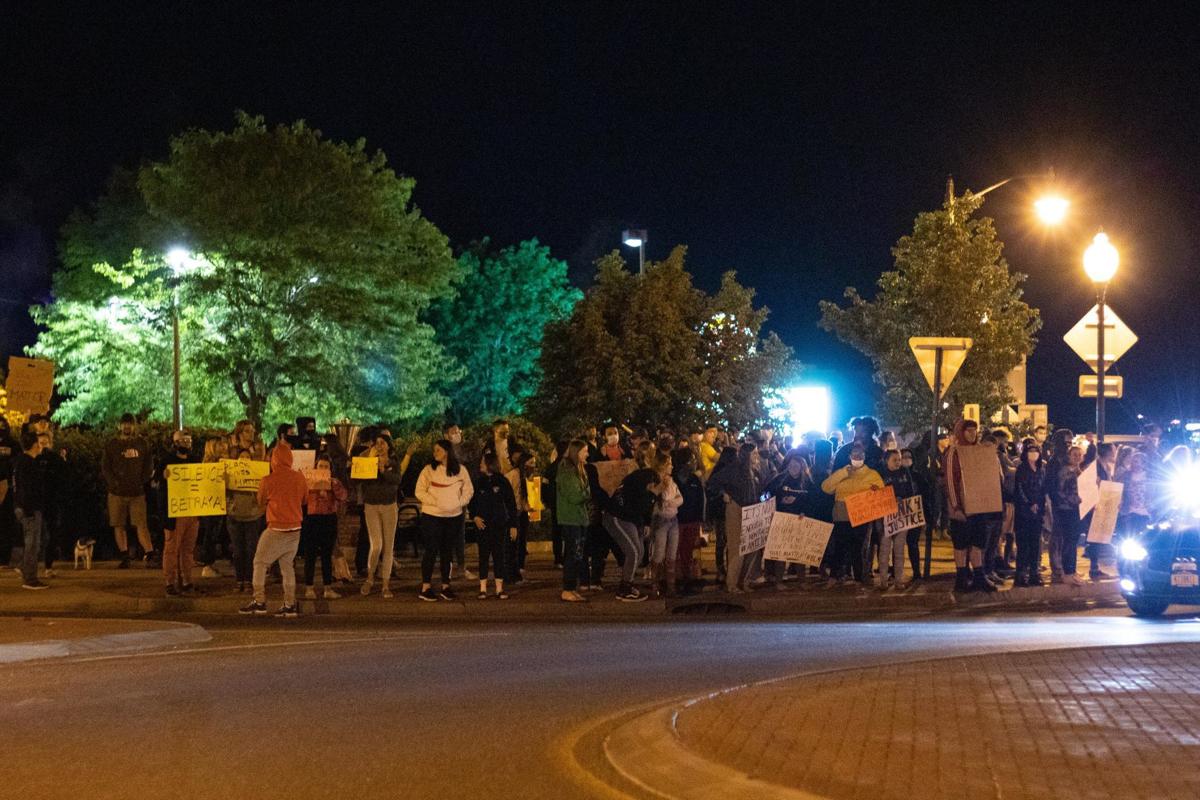 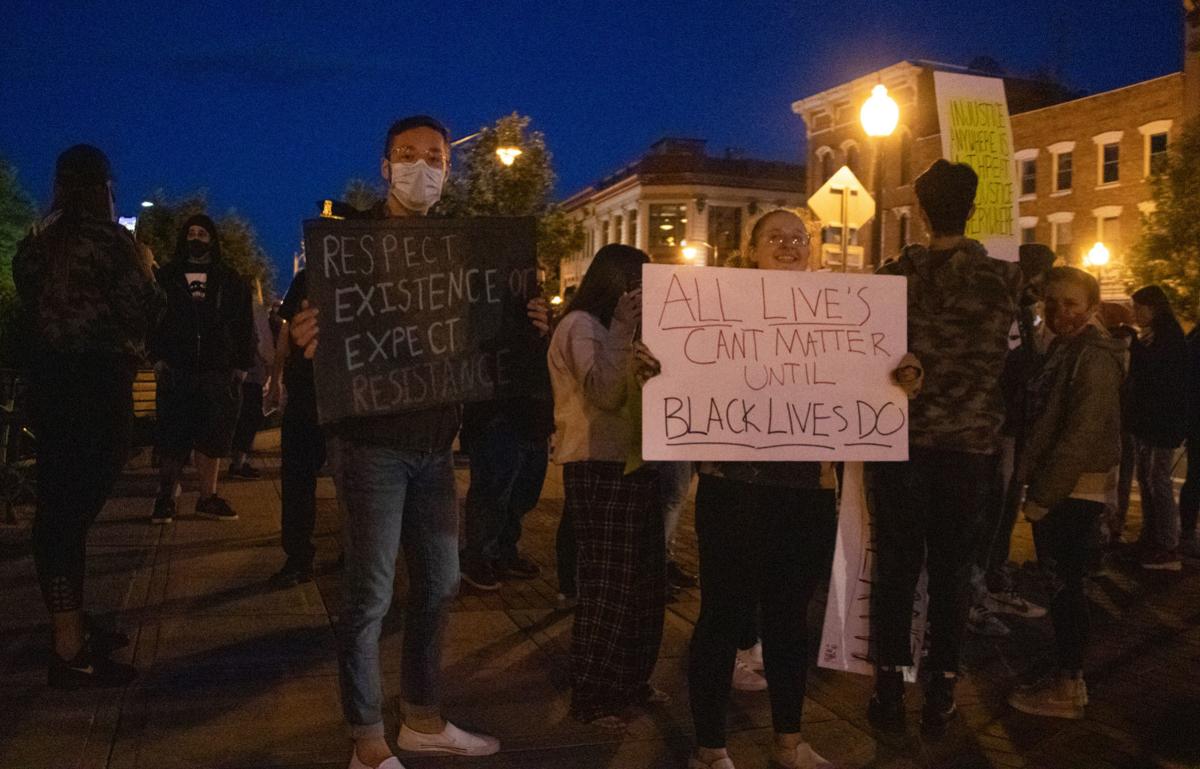 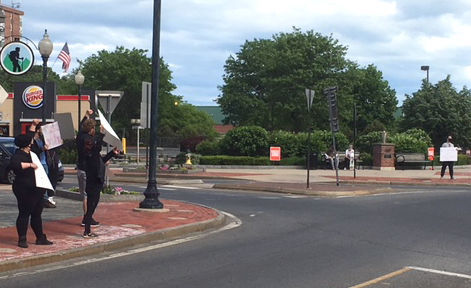 Protesters hold up signs at Centennial Circle in Glens Falls on Sunday. 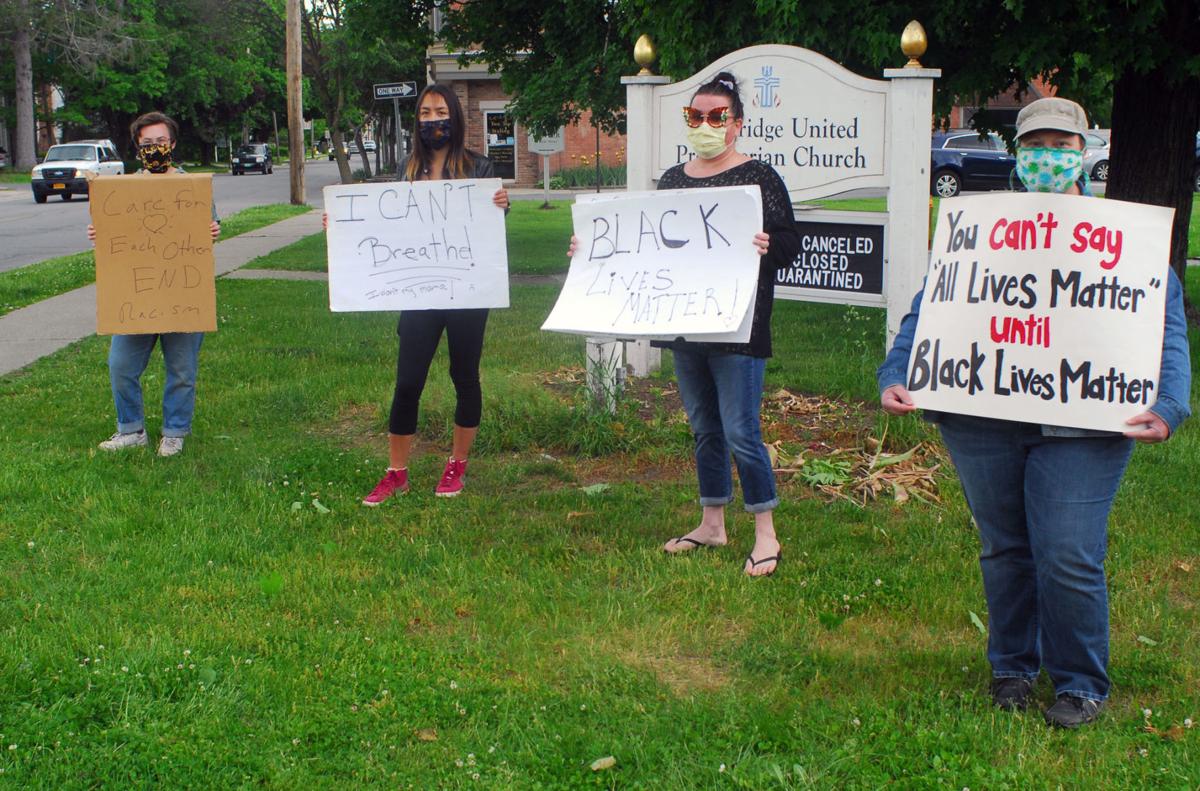 A group of women in Cambridge protested Sunday afternoon near the traffic light. Pictured are, left to right: Sarah Burke, an unidentified woman, Megan Woodcock and Megan Carroll.

GLENS FALLS — Downtown Glens Falls was closed off by police for a while late Sunday night and early Monday morning after a day of protests at Centennial Circle.

A handful of protesters held up signs on the curbs around the circle throughout Sunday afternoon advocating equality and supporting George Floyd, who died in Minneapolis last week. Crowds grew at night and counter protesters arrived, some of them with banners supporting President Donald Trump.

There was a large police presence at the circle, with Glens Falls Police supplemented by State Police and sheriff's officers.

There was occasional shouting between the two groups. There were instances when Black Lives Matters protesters shouted at police. At another point, a protester hugged a police officer.

Police shut off all entrances to the circle late at night. Ridge Street and Glen Street were blocked off outside the downtown area. About 10 police cruisers were parked at the center of the circle at one point.

The crowd began to thin out after midnight, though some protesters still lingered. Roads were reopened to traffic and the circle was empty of protesters as of 1:45 a.m.

Earlier Sunday, at 4:30 p.m., there were 14 people holding signs that read “Black Lives Matter,” “Say Their Names” and “I Can’t Breathe.” The last sign was in reference to the death of Floyd, which has spurred protests around the country.

Anthony Grace of Queensbury said he showed up at the circle around noon and had been there all afternoon. He said it was not an organized protest by any group, but rather people had come and gone throughout the day.

Protesters held signs while standing near the curbs that surround Centennial Circle. Some cars honked as they drove by.

“It seems like we have quite a bit of support by the people driving by, which is a good thing,” said Patrick Malone of Glens Falls, who heard about the protest and came down with his wife and her sister.

Malone said he was concerned about oppression of minorities in the United States. He said the protest was about equality.

“I think this is what’s right to do for our community,” he said. “And I’m not here to protest against police, because I know a lot of people in the Glens Falls police department and they’re great people. This isn’t just about the death of George Floyd, this is about years and years of systematic oppression and racism that’s still rampant. The fact that we still have to do this in 2020 is mind-boggling.”

Riley Brennan of Queensbury said she saw a couple of women at the circle on Saturday and decided to make signs and come on Sunday. She said she was advocating racial justice and accountability.

Another protest with a small group of women was held in downtown Cambridge on Sunday. Photographer Bruce Squiers said the women spontaneously got together to stand at the intersection of Park and Main streets. There was also a protest in Saratoga Springs.

Covered a protest today in Glens Falls. A first for me. pic.twitter.com/PmjRLrOBEJ

Covered a protest today in Glens Falls. A first for me. pic.twitter.com/PmjRLrOBEJ

Thousands show up for peaceful rally and march in Glens Falls

At least 2,000 people showed up in City Park early Friday afternoon for a Black Lives Matter rally and march.

A police vehicle blocks off access to Centennial Circle in Glens Falls on Sunday night.

Protesters hold up signs at Centennial Circle in Glens Falls on Sunday.

A group of women in Cambridge protested Sunday afternoon near the traffic light. Pictured are, left to right: Sarah Burke, an unidentified woman, Megan Woodcock and Megan Carroll.