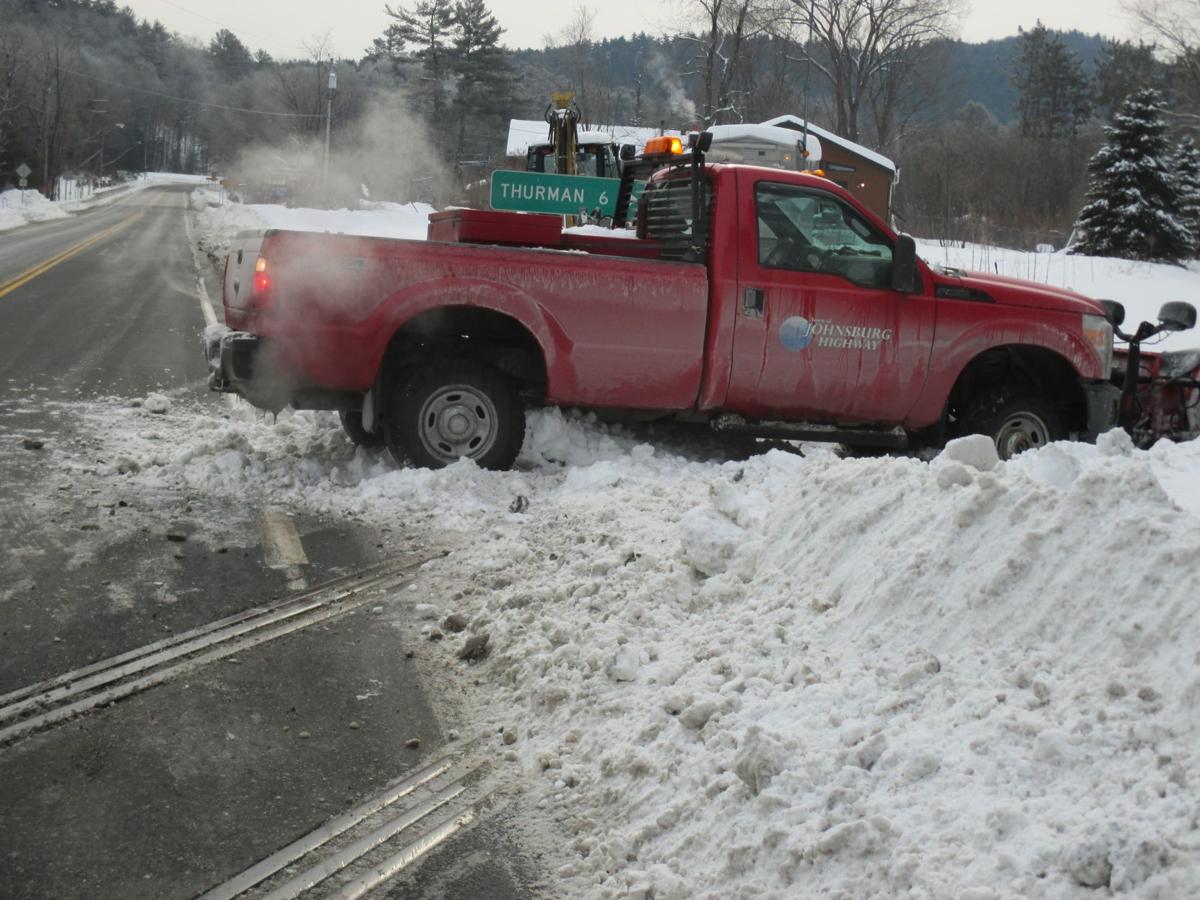 The Johnsburg highway superintendent is blaming a derailed train and broken crossing for an accident that injured him and damaged his town truck. 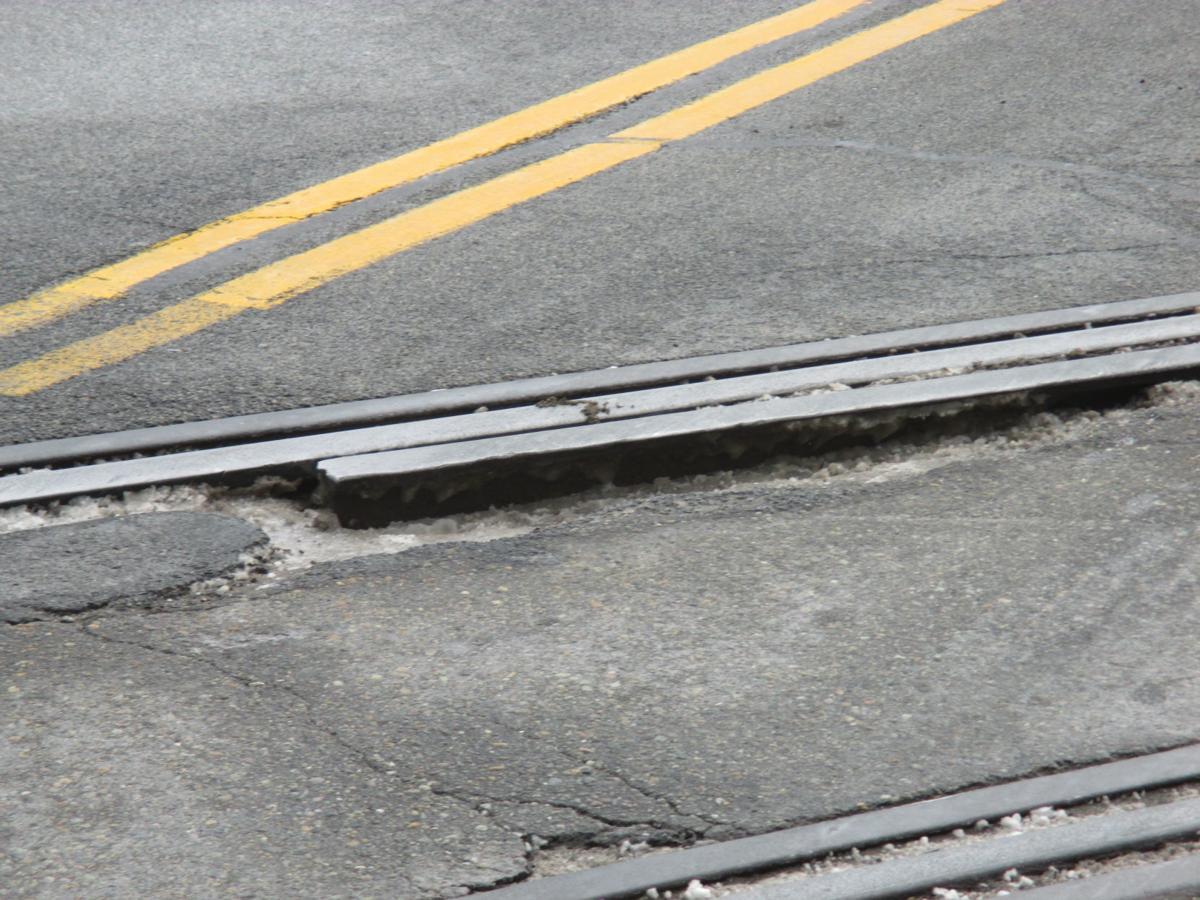 This section of train track on Route 28 in Johnsburg was blamed for catching a plow as a town truck driver braked for a nearby locomotive.

JOHNSBURG — Town Highway Superintendent Dan Hitchcock was driving south on Route 28 on Friday morning, approaching The Glen, when he saw a train with engine running at the edge of the road.

Thinking the train crossing lights had malfunctioned and the train was headed across the road, he slammed on the brakes. The town’s Ford pickup truck skidded, its plow catching the track and causing the truck to careen out of control.

It came to rest in a snowbank, and Hitchcock was knocked unconscious, later diagnosed with a concussion and whiplash.

Train engine derails, is left running for a week

“The sheriff said I was lucky I had my seat belt on, or I would have gone through the windshield,” he said.

The train was a Saratoga & North Creek Railway engine that derailed east of the Route 28 crossing on Feb. 6 and had been idling there until Monday amid efforts to get it back on the tracks. The railway has been unable to “re-rail” it, to the chagrin of neighbors and town officials. It was left running so the engine wouldn’t freeze, and residents have complained about the noise and smell of diesel fumes.

Sometime late Monday or early Tuesday though, someone climbed into the machine and turned it off, prompting the railway to call the Warren County Sheriff’s Office. It was unclear whether the locomotive was damaged by the shutdown.

Despite his injuries, Hitchcock was back to work on Saturday, but he said the two-year-old Ford F250 he drove and the plow it carried were probably totaled, at a cost of about $36,000.

Hitchcock said he was particularly angered by the lack of warning about the train and a piece of metal train track that was protruding from the road that apparently caught his truck’s plow. It was unclear how the track had been damaged, but it should have been repaired, he said.

He said it was “instinct” upon seeing the train to brake quickly, at about 45 mph. At least one other driver reported slamming on their brakes at the crossing in recent days, thinking that the train was crossing.

“There should have been signage there to warn people,” he said. “I saw the train there, there was no snow on it and I could tell it was running so my instinct was to slam on the brakes.”

Railway general manager Justin Gonyo said, “I have no comment on vehicular accidents that are outside of my control.”

SNCR staff has been trying to get the locomotive back on the tracks, but Gonyo said ice and snow have hindered the effort. The railroad has hired a contractor to assist, but the company won’t arrive until Thursday.

Horicon Supervisor Matt Simpson, chairman of the Warren County Board of Supervisors Public Works Committee, said the contractors were due to arrive Thursday to right the locomotive, and he believed it would be done that day. But it was unclear whether the locomotive could run in light of the engine having been shut off, so another engine might need to be brought in to move it.

He said Gonyo believed the contractor would have the train back on the rails by the end of the week.

“They are going to have to bring in another locomotive in there to move it,” Simpson said.

That could be a problem, as ice continues to block the tracks south of Thurman, Simpson said.

Locomotive back on tracks in Johnsburg

JOHNSBURG — The Saratoga & North Creek Railway locomotive that was derailed on tracks off Route 28 was put back on the rails Thursday.

Read past stories about the Saratoga & North Creek Railway:

The Johnsburg highway superintendent is blaming a derailed train and broken crossing for an accident that injured him and damaged his town truck.

This section of train track on Route 28 in Johnsburg was blamed for catching a plow as a town truck driver braked for a nearby locomotive.