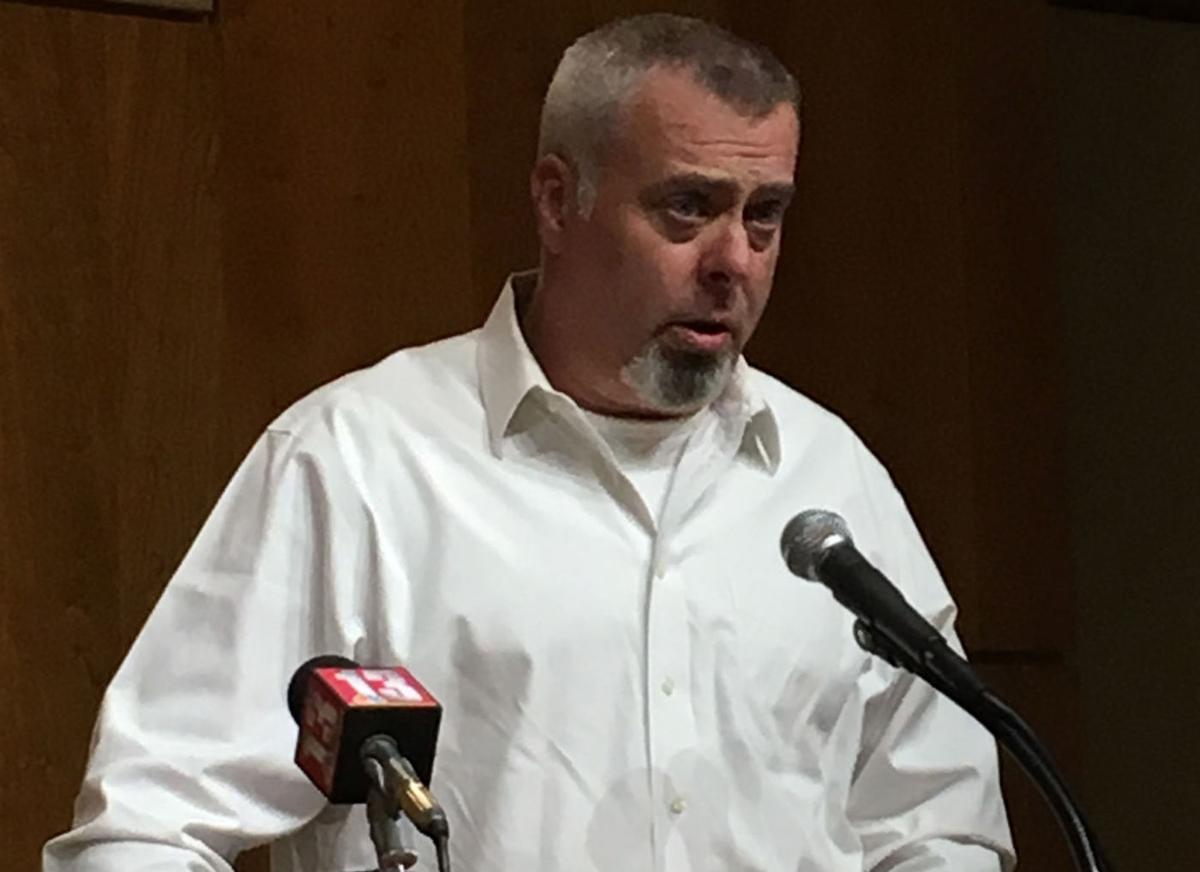 Jason Gough, former meteorologist with WNYT-TV, speaks about his childhood sexual abuse at a campaign event for the Child Victims Act at Crandall Public Library on Tuesday. 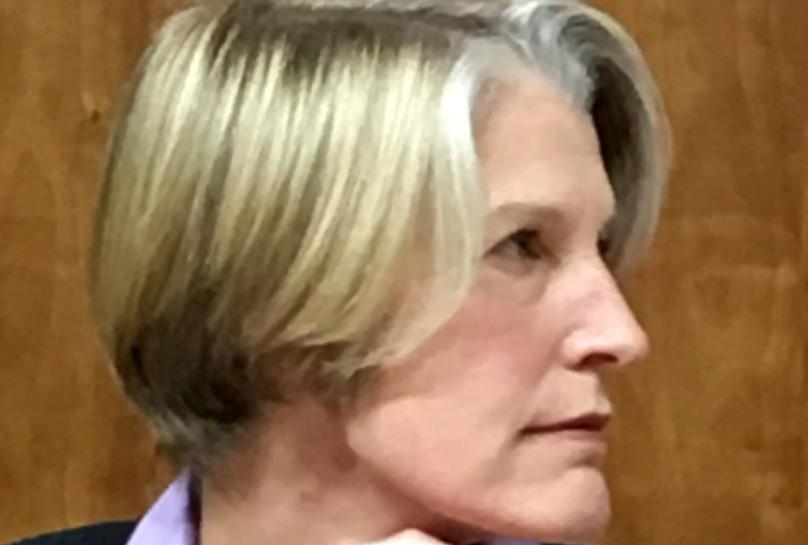 Emily Martz listens to a sexual abuse victim speak in favor of the Child Victims Act at Crandall Public Library on Tuesday. Martz, a Democrat, is running for the state Senate in District 45. 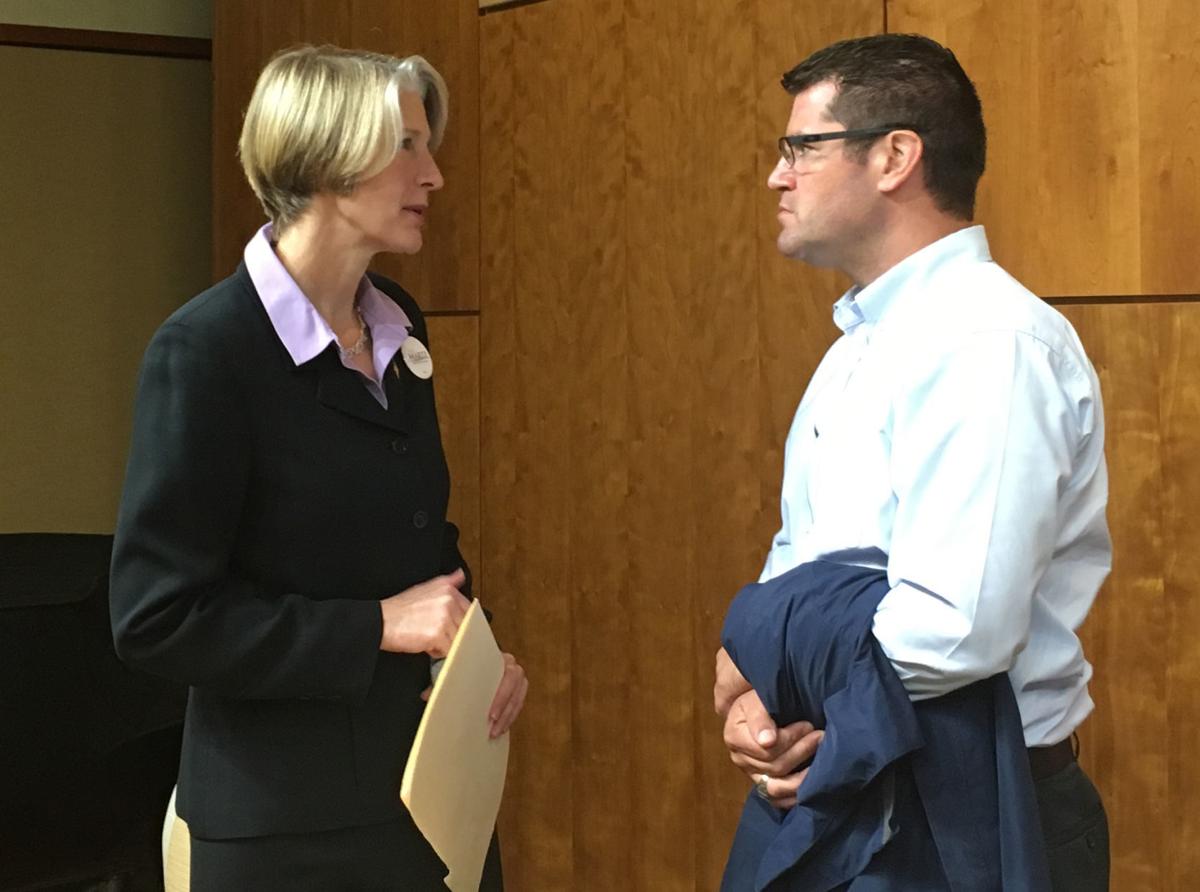 GLENS FALLS — The Child Victims Act will be passed within the first 30 days of the next legislative session if Democrats take the state Senate, three Democratic Senate candidates emphasized Tuesday.

Emily Martz, who is running against Republican state Sen. Elizabeth Little, urged the public to vote to get the Child Victims Act passed.

Martz, Aaron Gladd and Michelle Ostrelich held a campaign event at Crandall Public Library to show their support for the Child Victims Act. They also held the event to highlight the fact that their opponents, Sens. Little, R-Queensbury, and Jim Tedisco, R-Glenville, as well as retiring Sen. Kathy Marchione, R-Halfmoon, have not voted for the act.

The Senate Republican leadership has refused to allow a vote on the Child Victims Act. It has been held back in committee for more than a decade, while it passed in the Assembly six times. Little voted against the act in 2016, saying she did not want adult victims to be able to sue institutions and people involved in their sexual abuse.

That could badly hurt institutions like the Roman Catholic Diocese of Albany or the Boy Scouts, she said.

But, recently, Little said her feelings on the bill had evolved and that she would now support it.

Martz said Tuesday that it was too late.

“Until I got into the race, my opponent stood squarely against the act,” she said. “I stand today, as I always will, with the victims.”

Little, she added, “sided instead with the predators.”

“It’s false. It’s campaign rhetoric,” he said. “She is a mother and grandmother and wants to see, as much as anyone, justice for these victims.”

Little came under fire from the victims who spoke Tuesday as well.

Heath Bromley, who was abused by Catholic priest Gary Mercure of Queensbury, who was convicted of child rape and indecent assault against teens he met through local parishes, told the crowd not to trust Little.

“She says she’ll make the change, now that she’s running for re-election. I don’t feel she should get another chance to fail us,” he said.

Victim Gary Greenberg, of Greene County, who was abused by a hospital worker when he was 7 but could not press charges because the man was found after the statute of limitations expired, said he had personally asked Little to vote for the act.

Little told him it would bankrupt the local Catholic diocese, he said.

“So, Betty, we’re not interested in your support now,” Greenberg said.

But MacEntee said Little had definitely changed her mind.

“She supports the legislation as proposed by the governor,” he said. “She can be counted on to vote for it.”

The proposal includes giving all adult victims a one-year window to sue, allowing victims to press criminal charges until they are 28 years old and allowing them to pursue civil claims until they are 50. Currently, they must report the abuse by age 23.

Jason Gough, former meteorologist for WNYT-TV, who said he was abused by an aunt when he was a child, said he is most concerned about abusers who can’t be arrested due to the current statute of limitations.

“Time’s up for the priests who continue to skip merrily down the street,” Gough said. “He gets up, he brushes his teeth, he eats breakfast, and everything is peachy keen. This gets passed and his life is going to change. And I can’t wait.”

Greenberg said that in his case, his abuser was put in prison — but he has served two-thirds of his sentence and is eligible for release when he gets approved housing. That might not be the case if the hundreds of adults who reported him were able to be part of the criminal case.

“We were able to get him on a couple current cases, and he keeps trying to get out. So that’s what we’re facing,” Greenberg said. “It’s not about money. It’s about being able to face your predator and heal.”

“If you know your last victim turned 23, you can walk into a police department and say, ‘Hey, look what I did,’ and there’s nothing that can be done,” Gough said.

But victims reserved most of their ire for the Republican leaders who have not allowed the bill to be brought to the floor of the Senate for a vote.

Martz urged the crowd to vote in Democrats for Senate and to particularly vote out Little.

“We can hold her accountable by helping her lose her job,” she said.

You can reach Kathleen Moore at 518-742-3247 or kmoore@poststar.com. Follow her on Twitter @ByKathleenMoore or at her blog on www.poststar.com.

Taxes would go up for Fort Edward school district residents because of a large drop in the assessed value of a major business.

Jason Gough, former meteorologist with WNYT-TV, speaks about his childhood sexual abuse at a campaign event for the Child Victims Act at Crandall Public Library on Tuesday.

Emily Martz listens to a sexual abuse victim speak in favor of the Child Victims Act at Crandall Public Library on Tuesday. Martz, a Democrat, is running for the state Senate in District 45.