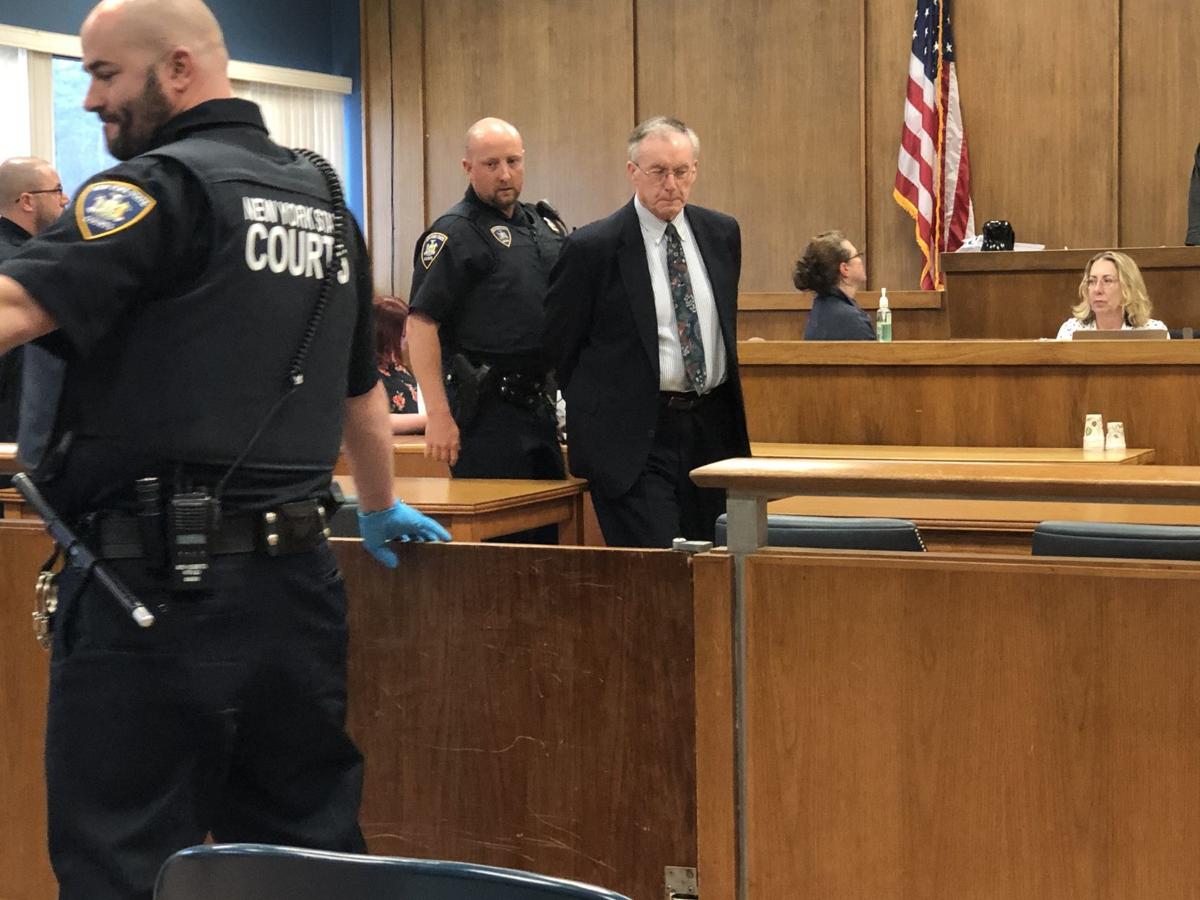 David Decker is led from court by state court officers after he was convicted of six felony charges Friday afternoon. 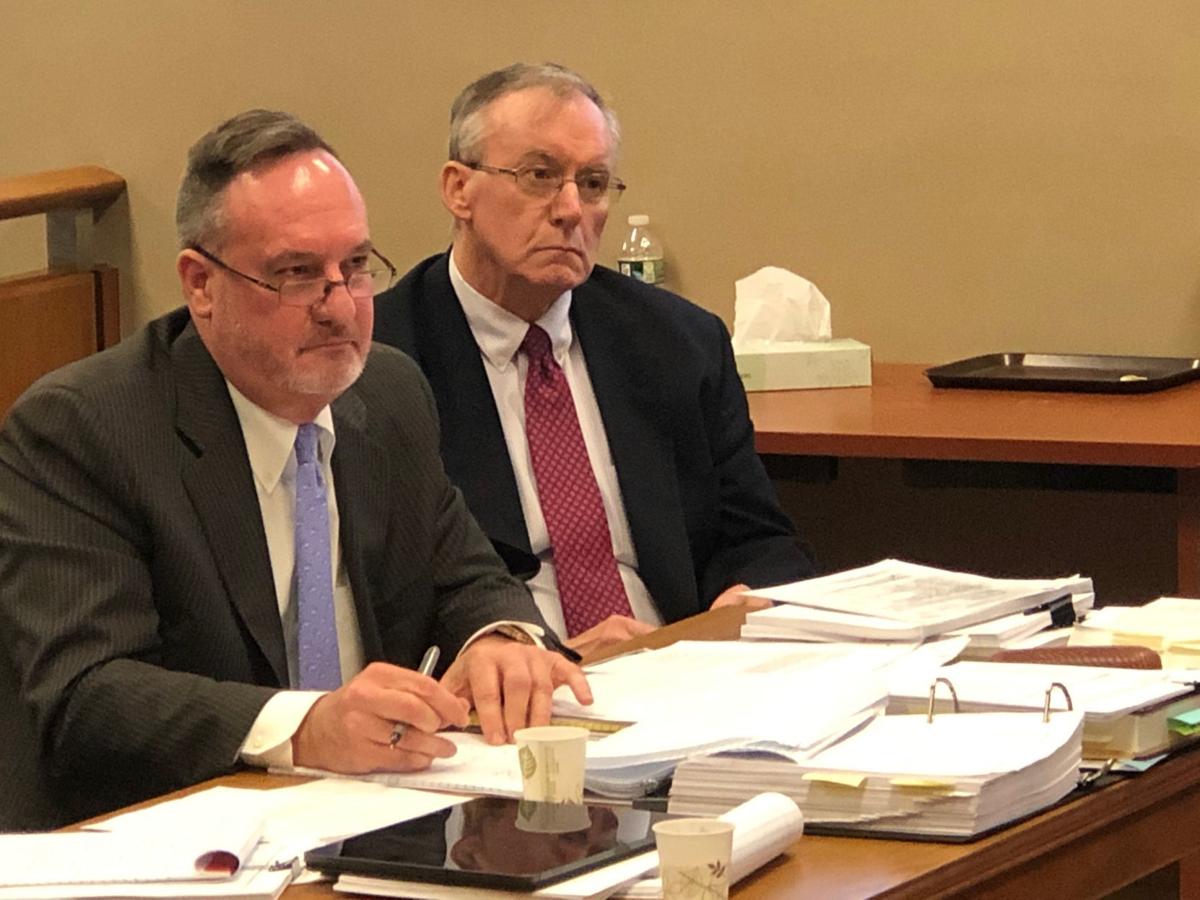 QUEENSBURY — The former director of Lake George Watershed Coalition was convicted of six of eight charges Friday, convicted of grand larceny and tax counts but acquitted of the weightiest charge.

Decker sat stoically as the jury forewoman responded “guilty” to felony counts of grand larceny, scheme to defraud and four charges of offering a false instrument for filing as she was polled Friday afternoon.

He faces up to 5 to 15 years in prison when sentenced June 11 by Warren County Judge John Hall and was sent to Warren County Jail, pending sentencing.

The verdict ended a trial that lingered over a span of four weeks, with nearly four full days of deliberations, as prosecutors presented a case that showed years of massive fraud and mismanagement of the environmental organization’s state and federal grant funding. The charges alleged he stole more than $250,000 between 2012 and 2016.

The jury sat in the courtroom for nearly 10 minutes after rendering the verdict, as defense lawyer Karl Sleight asked Hall for a meeting at the bench’s sidebar. He took issue with an unspecified issue, and after a few minutes Hall could be heard directing Sleight to make a “post-jury motion,” and the conference ended.

Hall praised the members of the jury for sticking through the trial as the country went through “tumult” over the spread of COVID-19.

Sleight said the verdict would be appealed, and he planned to go to the Appellate Division of state Supreme Court to seek Decker’s release from jail, pending that appeal. He said Friday night the appeals court agreed to release him on his own recognizance, and he was expected to be released later in the evening.

Warren County District Attorney Jason Carusone praised the work of Assistant District Attorney Ben Smith and Christine Stevens, an attorney with the state Department of Taxation & Finance who assisted during the trial.

“It definitely was a team effort,” he said. “There were a lot of agencies involved, the (Warren County) Sheriff’s Office, Comptroller’s Office, Tax & Finance. They worked really hard on this case.”

“From sham companies to fake invoices, Mr. Decker took advantage of his position to enrich himself at the expense of the communities he was appointed to serve,” DiNapoli said. “I thank District Attorney Jason Carusone and the New York State Department of Taxation and Finance for their exemplary work and partnership with my office to bring Decker to justice.”

David J. Decker, 69, of Burnt Hills was on trial for alleged theft while he was executive director of the Watershed Coalition, which until his 2017 arrest was a loose-knit, unofficial consortium of environmental groups and municipalities, headed by the state Department of State, that obtained state and federal funding for more than a dozen environmental projects to protect Lake George.

Among them was a manmade wetland that was part of the Charles Wood Park project.

The professional engineer was arrested by Warren County sheriff’s officers in March 2017, after Swan and Whitehead questioned unpaid bills and financial irregularities in Watershed Coalition projects.

An investigation by state agencies and the Sheriff’s Office concluded that more than $440,000 was stolen. Decker was ultimately indicted on 22 charges, but Warren County prosecutors dropped 14 charges in preparation for a trial based on complicated state laws and thousands of pages of documents.

He was accused of creating a fake contracting company that existed in name only and funneling $99,300 to it and also taking hundreds of thousands of dollars from other project grants.

He is also accused of failing to claim on his taxes the stolen money and hundreds of thousands of dollars from a youth basketball league he ran.

Decker and Sleight claimed he did not steal money, as state contracts allowed him to take whatever money was left over when work was done.

Warren County Assistant District Attorney Ben Smith, though, pointed out that Decker had made dozens of withdrawals of cash from the Watershed Coalition bank account at casinos and Saratoga Race Course, and seemed to submit numerous contractor invoices repeatedly for payment on different grants.

Three days without a verdict for the jury in the David Decker fraud case.

An accountant hired by David Decker's defense team testified Friday that he did no wrong.

The jury in the David Decker fraud trial heard about alleged fraud as well as withdrawal of Lake George Watershed Coalition funds at casinos and racetracks.

David Decker's defense lawyer was unable to convince a judge to throw out the charges against him as the prosecution wrapped up its case.

The jury in the David Decker fraud case trial on Tuesday saw bank records that showed deposits of public funds into bank accounts and subsequent transfers to his personal account.

David Decker is led from court by state court officers after he was convicted of six felony charges Friday afternoon.