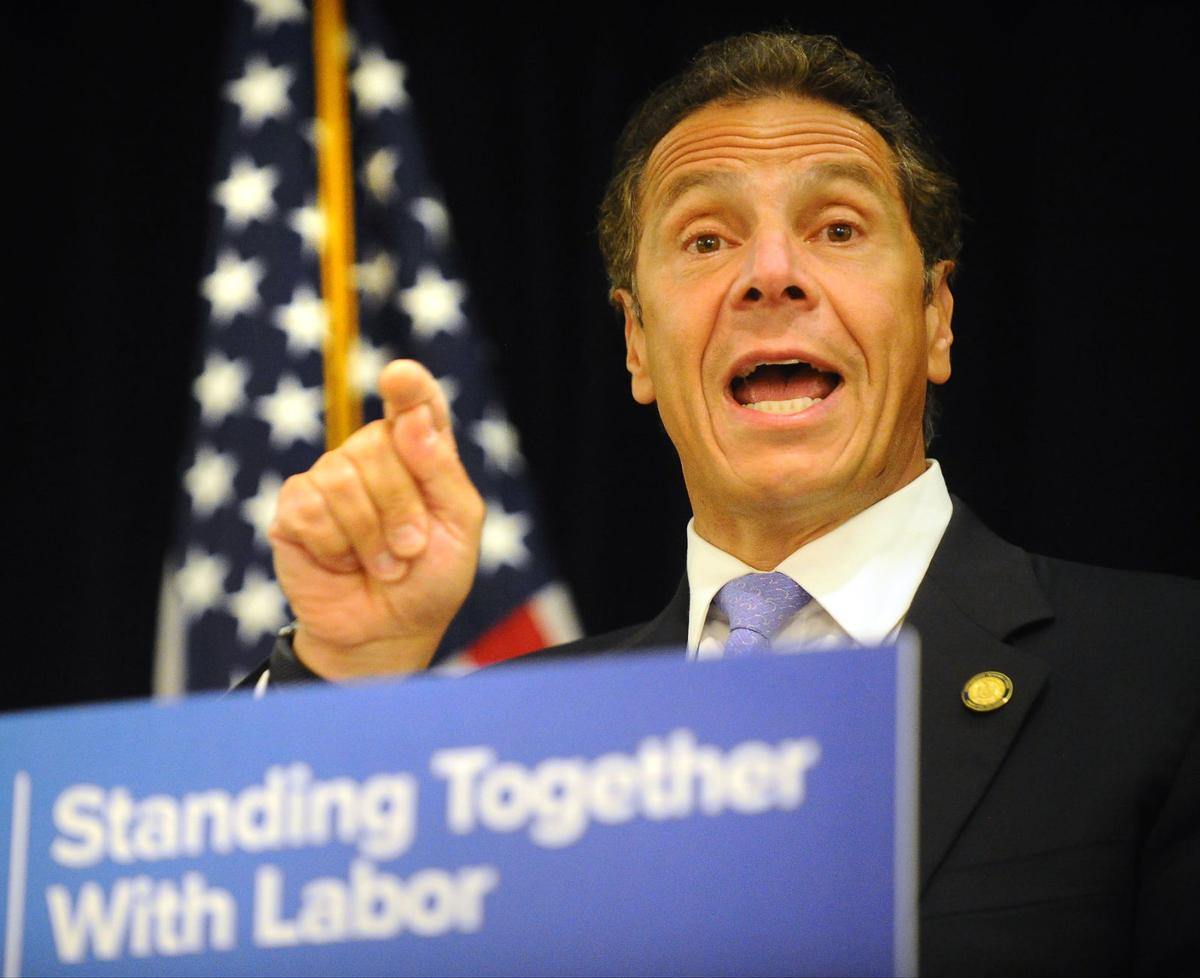 New York Gov. Andrew Cuomo addresses members of the New York State Pipe Trades Association during the 108th annual convention Tuesday at the Fort William Henry Hotel and Conference Center in Lake George. Cuomo spoke to a friendly crowd that gave him multiple standing ovations as he spoke about the history and future of New York's infrastructure. 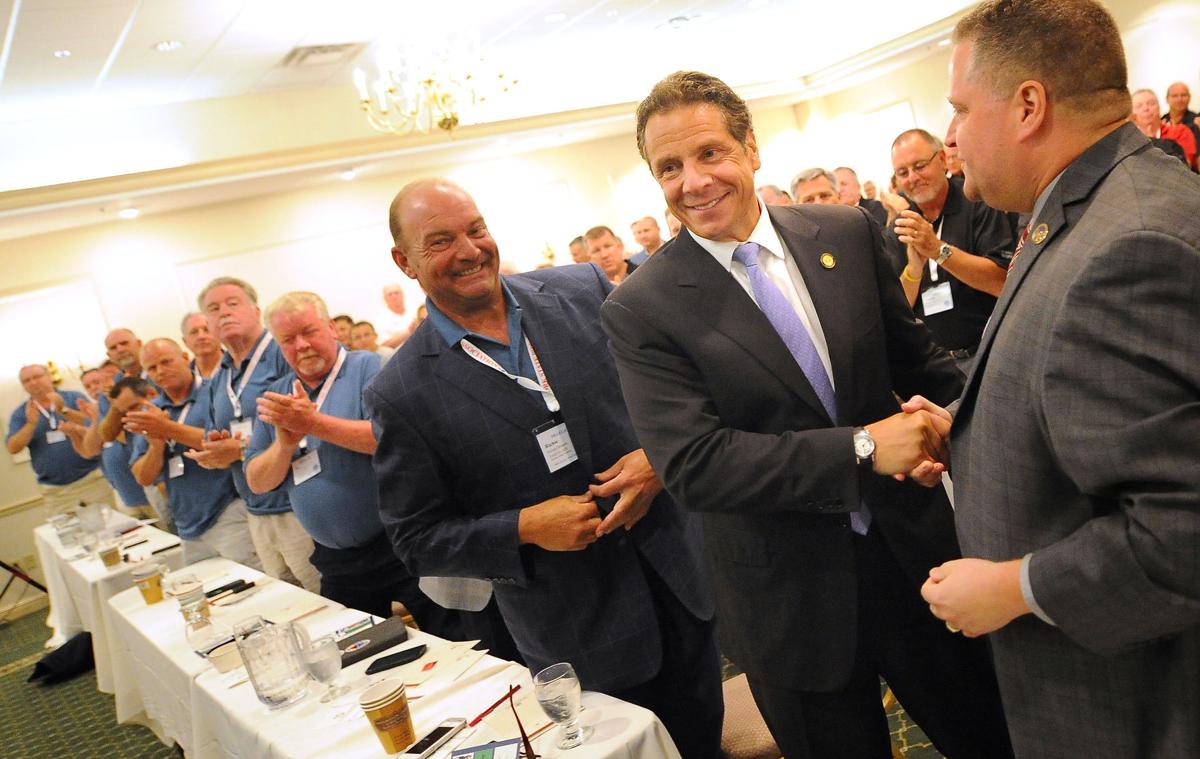 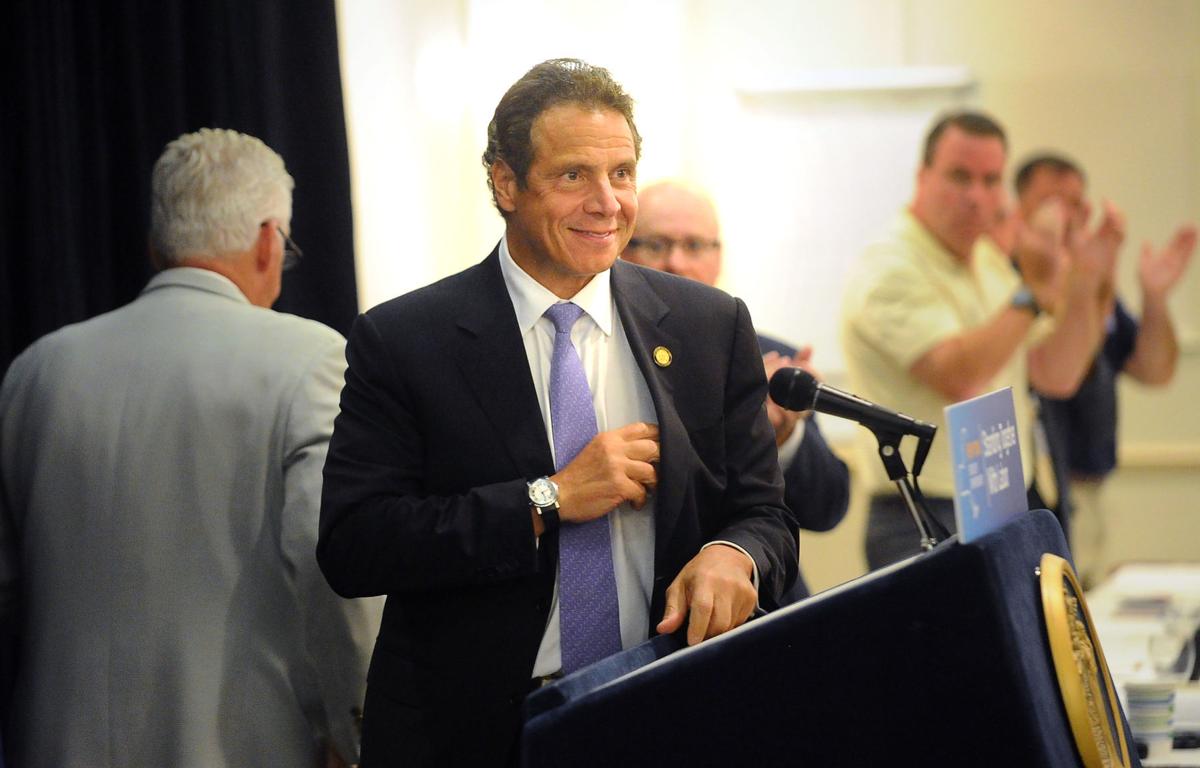 For “literally 20 years,” state lawmakers bandied about the need to replace the 3-mile bridge spanning the Hudson River that connects Rockland and Westchester counties, he said.

“That was the metaphor for New York. ‘We should do this. I hope to do this.’ But nothing happened. I came in and said, ‘We’re going to replace the Tappan Zee Bridge.’ One year later, we broke ground,” Cuomo said.

As the replacement bridge takes shape next to the original, its targeted opening is 2017. In the meantime, the project has supported more than 1,000 jobs.

“Thanks to Governor Cuomo, no state in the country is spending more on capital infrastructure than our governor. You know what that means? That means jobs for everybody in this room. He got something done nobody said would ever happen (the Tappan Zee Bridge replacement). ... We have 1,200 building trades members on that job as of today,” said Jim Cahill, international representative for the United Association of Plumbers and Pipefitters and president of the New York State Building Trades.

Cahill said his organization represents about 30,000 workers in the state.

About 170 people attended the conference, which began Sunday, from all over the state.

On Tuesday, Cuomo spoke to a friendly crowd that gave him multiple standing ovations as he spoke about the history and future of New York’s infrastructure, from the Erie Canal to the need for modernization to keep ahead of other states.

He was also given the “New York Builder” award from the group.

“In New York, we were frozen in time. State government wasn’t functioning. We had lost our momentum. We lost our optimism. We lost our aggressiveness,” Cuomo said, citing politically charged gridlock that prevented budgets from being passed on time.

On Tuesday, Cuomo also was given the the “Champion of Organized Labor” award at the New York Laborers meeting at The Sagamore in Bolton Landing.

At that meeting, he ceremoniously signed a bill aimed at protecting consumers who need mold assessment abatement or remediation work on their properties from fraudulent contractors.

Under the law Cuomo signed, a new license for those working with the abatement and assessment of mold, as well as remediation projects, will be issued by the state Department of Labor after the completion of a state-approved training program.

Cahill praised Cuomo, saying he’s doing “what no other governor in the country is doing” with infrastructure.

Cuomo’s nearly 20-minute remarks came after Monday’s announcement of New York’s LaGuardia Airport revamp, the first phase of which will cost $4 billion — half from private funding.

LaGuardia is known to be especially congested and outdated, with its most famous critique coming from Vice President Joe Biden last year when he said it was like an airport in “some Third World Country.”

“For years, we just let it go,” Cuomo said, adding that the project will support 8,000 jobs.

“We doubled our budget on roads and bridges from about $6 billion to about $12 billion because we had a whole inventory of undone work, and we are bringing back upstate New York in a way no one thought possible,” Cuomo said, citing about $1 billion invested in the Buffalo area.

Cuomo has had a strained relationship with some unions, such as teachers, but has forged strong ties with other organized labor groups.

New York Gov. Andrew Cuomo addresses members of the New York State Pipe Trades Association during the 108th annual convention Tuesday at the Fort William Henry Hotel and Conference Center in Lake George. Cuomo spoke to a friendly crowd that gave him multiple standing ovations as he spoke about the history and future of New York's infrastructure.