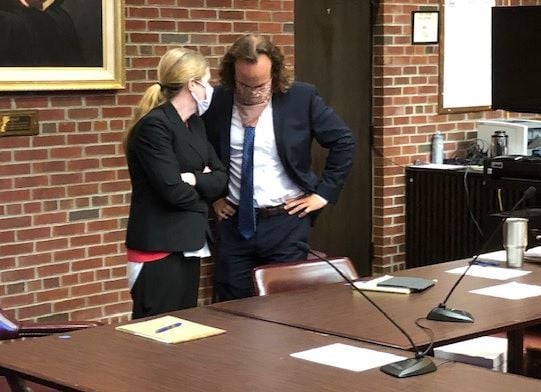 From left, Melissa LaPoint, formerly of Moreau, confers with her attorney, Kevin O'Brien, at her trial in Saratoga County Court on Friday. LaPoint is charged with setting fire to her home at the Sisson Reserve Apartments in August 2018. 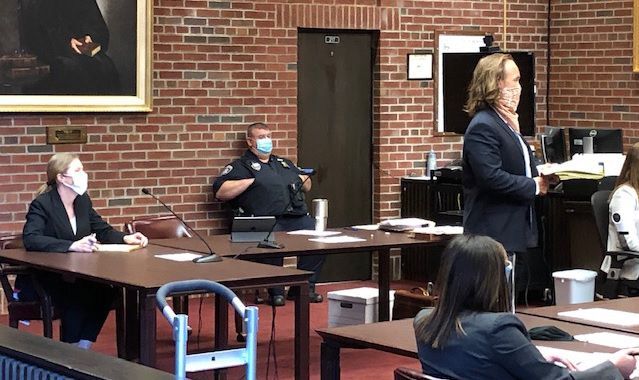 Defense attorney Kevin O'Brien cross-examines a witness in Saratoga County Court on Friday as his client, Melissa LaPoint, looks on at left. LaPoint is charged with setting fire to her home at the Sisson Reserve Apartments in August 2018.

BALLSTON SPA — The trial of a woman accused of setting her Moreau apartment on fire in August 2018 got underway this past week.

Melissa R. LaPoint, of Spier Falls Road, is charged with second-degree arson, third-degree arson and misdemeanor reckless endangerment and endangerment of the welfare of a child for the Aug. 16, 2018, fire, which heavily damaged her home at 9E Sand Hill Drive in the Sisson Reserve Apartments complex.

No one was injured, but her child was in the home at the time of the fire.

LaPoint in January rejected a plea offer that would have required her to serve 5 1/2 years in prison.

On Friday, the jury heard from Andrea Lucynski, who was property manager of the apartment complex at the time.

Lucynski testified that LaPoint’s apartment was inspected on July 9, 2018, and LaPoint had mentioned that there was a circuit breaker issue that was causing the apartment to lose power.

The following month, on Aug. 16, Lucynski said LaPoint had contacted her to inquire about a rent reduction because she also had a car payment.

“She was having financial difficulty,” Lucynski said.

Lucynski explained that residents are charged rents based upon their income and are in different tiers. She said she told LaPoint that if she wanted to pay a lower amount, she might have to move to another apartment in the complex that has the less-expensive rate.

“It wouldn’t be simple. We’d have to have a unit available that fit that income requirement,” Lucynski said.

The following morning when she came into work, Lucynski was notified that LaPoint’s apartment had been struck by fire. Lucynski’s supervisor was speaking with LaPoint about the incident and she was on speakerphone. Lucynski said LaPoint had renter’s insurance and wanted assistance in filing a claim.

In response to questions from Assistant District Attorney Jennifer Buckley, Lucynski said renter’s insurance was not required of tenants in the complex.

Lucynski also said there were cameras mounted near the apartment complex’s clubhouse and they recorded video of the night in question of LaPoint’s apartment. All that video footage was turned over to investigators.

Lucynski also testified that LaPoint had mentioned in passing that she had some issues with neighbors.

On cross-examination, defense attorney Kevin O’Brien asked Lucynski if LaPoint seemed distressed on the morning after the fire.

In addition, he asked if his client had renter’s insurance during the entire time she was living there, and Lucynski said she believed she had.

O’Brien also asked her about a fire in trash receptacle that occurred on July 4 of that year. The cause was undetermined.

The trial resumes on Monday morning.

This is one of four trials underway in Saratoga County Court as part of a state pilot project to reopen courts after the COVID-19 shutdown. Precautions are being implemented. Everyone in the courtroom is wearing masks. Witnesses are behind a partition in the witness box and they are wearing face shields.

Only three members of the jury are seated in the jury box and the other 11 are sitting in four rows of the audience area — three to a row.

A woman facing arson charges for a fire at a home turned down a plea deal Thursday.

A Moreau woman has been indicted on arson charges.

MOREAU — A home on Sand Hill Drive was damaged by fire late Thursday.

The trial of a woman accused of setting her apartment on fire continued Monday with testimony from two witnesses.

Moreau woman acquitted of all charges in apartment fire

The woman accused of setting her Moreau apartment on fire in August 2018 was acquitted of all charges on Friday.

From left, Melissa LaPoint, formerly of Moreau, confers with her attorney, Kevin O'Brien, at her trial in Saratoga County Court on Friday. LaPoint is charged with setting fire to her home at the Sisson Reserve Apartments in August 2018.

Defense attorney Kevin O'Brien cross-examines a witness in Saratoga County Court on Friday as his client, Melissa LaPoint, looks on at left. LaPoint is charged with setting fire to her home at the Sisson Reserve Apartments in August 2018.