Monday Night Football: Scores and updates from Rams vs. 49ers

MALTA — One person is dead after leading police on a chase that began at the Saratoga National Historical Park and ended in Malta after crashing into a guardrail.

The incident began at about 7:45 p.m. Wednesday when the Saratoga County Sheriff’s Office became aware of a suspicious vehicle complaint being handled by U.S. park rangers at the battlefield in the town of Stillwater.

Police said a 2008 Toyota Tundra struck barriers at the park entrance and fled from U.S. park rangers. The vehicle continued north on state Route 32, after which the rangers lost sight of it.

The Stillwater Police Department located the vehicle traveling north on Route 4. The vehicle’s driver continued to flee from police and proceeded south throughout the village of Stillwater before reaching the city of Mechanicville, where it passed through and continued west on state Route 67, according to police.

The vehicle continued to Route 9, where it turned south and struck signs in the roundabout at Route 9 and Route 67. It then went south on Route 9, when it crossed over to the northbound lane and struck a guardrail on the east side of the roadway near Goldfoot Road in the town of Malta and came to a stop.

The driver was found dead inside the truck. Police have identified him as Robert A. Sanders, 48, of Lakewood, New Jersey.

Police are asking the public to contact the Saratoga County Sheriff’s Office at 518-885-6761 if they have encountered Sanders recently.

The truck also had a large brown toolbox inside the vehicle, according to police.

A White Creek woman has been indicted for her alleged role in an incident where police said her husband fired multiple shots at police.

A Whitehall man was arrested on Wednesday on a fugitive from justice warrant.

The other brother involved in killing a former Whitehall resident outside a Saratoga Springs bar in the summer of 2021 has pleaded guilty.

A Hampton sex offender has been sentenced to 1 to 3 years in state prison for failure to comply with requirements.

This newly developed mosquito repellent might have you ditching the DEET

This newly developed mosquito repellent might have you ditching the DEET

Danish Queen strips four of her grandchildren of their royal titles

Danish Queen strips four of her grandchildren of their royal titles 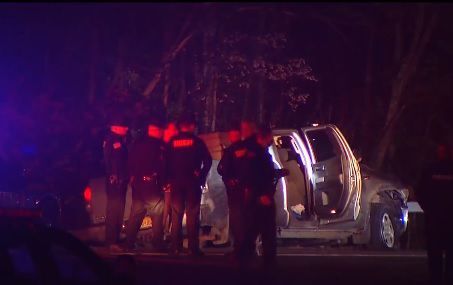 Law enforcement inspects wreckage of a vehicle that led police on a chase from the Saratoga Battlefield in Stillwater to Malta.