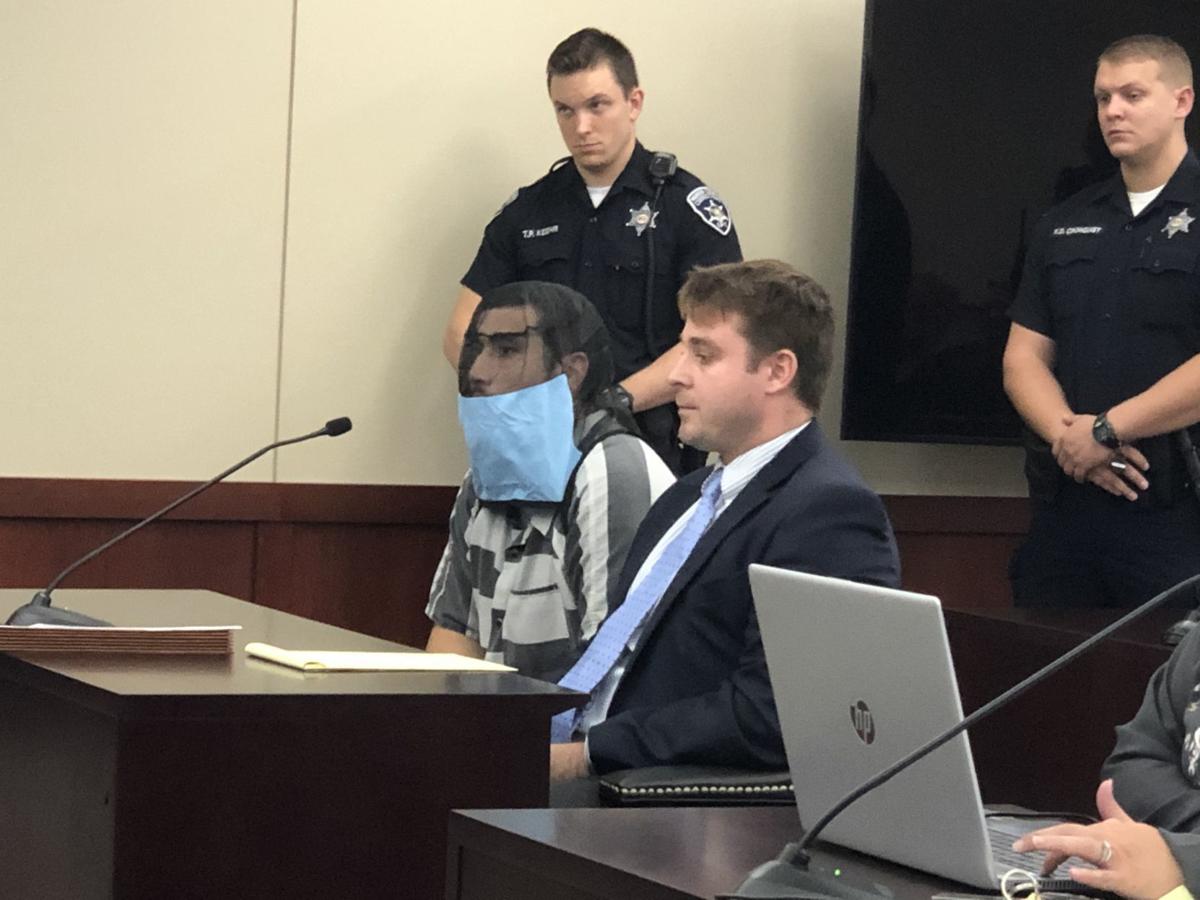 Skyler Crouse, wearing a mask, is arraigned Monday in Warren County Court on a 10-count indictment for the Sept. 26 crash that killed Horicon resident Joseph Turcotte. 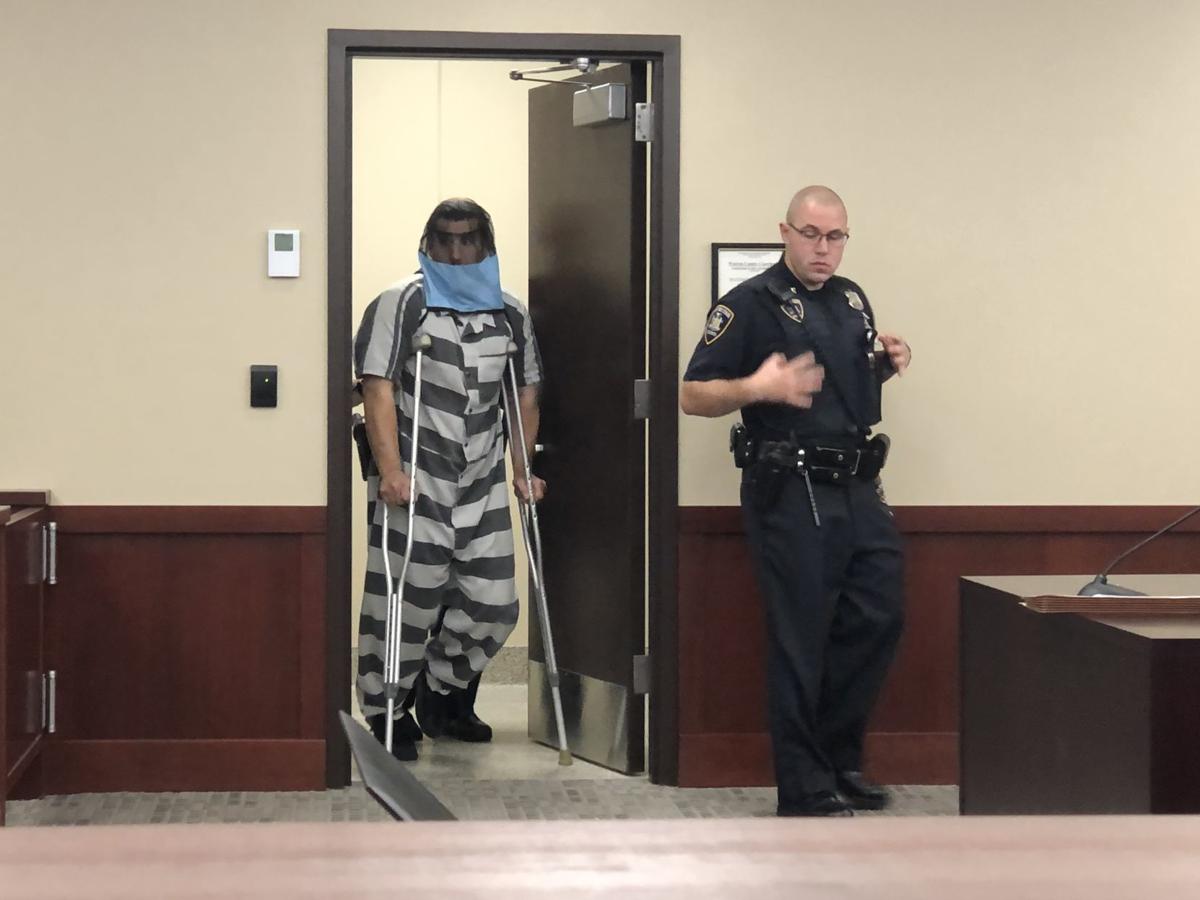 Skyler Crouse limps into Warren County Court on Monday for his arraignment on manslaughter and assault charges for the truck crash death of Horicon resident Joseph Turcotte.

QUEENSBURY — The man blamed for the Sept. 26 crash on the Northway that killed a Horicon town official and boat builder told police he was “mentally insane and on drugs” moments after the fatal collision, court records show.

Newly filed court records show Skyler B. Crouse told State Police he used the opioids Fentanyl and Percocet, and that he had taken them before the crash. A police drug recognition expert concluded he was under the influence of drugs after the collision that killed Joseph D. Turcotte.

Crouse also looked to cut a deal with police when they questioned him after he was taken into custody, according to an admissions report from a trooper.

“Let’s make a deal. I can get you drugs and illegal aliens,” he is quoted as saying.

Crouse, 30, pleaded not guilty Monday to a 12-count manslaughter and assault indictment for allegedly slamming a pickup truck into one driven by Turcotte, 38. Police said Turcotte’s truck was hit from behind with such force that it flipped end over end as Crouse fled from police who had clocked him driving 90 mph in a construction zone.

Crouse, who was agitated and spit on a news photographer at his initial arraignment Sept. 26, was calm as he sat with attorney Martin McGuinness on Monday. Warren County Judge John Hall sent Crouse to Warren County Jail without bail, setting no new court date pending the completion of a “pre-plea report” to which Crouse agreed.

State Police records show Crouse initially listed an address in Akewsasne, which is on the Mohawk Nation territory on the New York-Canadian border, and police said he has a Canadian driver’s license. But in court on Monday he told Hall he lived in Nedrow, a hamlet in Onondaga County, near Syracuse.

The manslaughter count alleges he acted recklessly in causing Turcotte’s death. He faces up to 25 years in state prison on the weightiest charge, first-degree assault.

Police have not said if he told them what he was doing in the area the morning of Sept. 26, when he blew through a construction zone in the northbound lanes near Exit 19 of the Northway at 90 mph just after 8 a.m.

State troopers and Warren County sheriff’s officers gave pursuit, and between exits 24 and 25 they used a tire deflation device to try to flatten his tires. One may have been punctured, but Crouse continued on and quickly veered from the passing lane to get off at Exit 25, where his truck hit Turcotte’s at high speed near the end of the exit ramp.

Turcotte, a master craftsman with Gar Wood Boats of Brant Lake and a Horicon Planning Board member, was killed almost instantly.

Crouse was initially scheduled for arraignment on the indictment last week, but was hospitalized at Albany Medical Center because of an infection. He was released from the hospital and returned to Warren County Jail late Friday.

It was unclear what became infected, but he had wounds on the back of his right and left legs and buttocks that appeared serious when he was first in court last week, as he was bleeding through a hospital gown and State Police wrapped him in plastic to prevent the spread of his blood. He was hurt in the crash, and when a police dog bit him when he tried to run from officers.

He walked into court on crutches and wearing a mask to prevent him from spitting on people.

Hall asked him how he was doing. He replied, “I’ve been better.”

QUEENSBURY — The driver who was blamed for a fatal crash that killed a Horicon man last week was indicted Tuesday on 12 charges, including cou…

New court filings detail police accounts of the high-speed chase on the Northway that ended with a fatal crash at Exit 25 last September.

Skyler Crouse, wearing a mask, is arraigned Monday in Warren County Court on a 10-count indictment for the Sept. 26 crash that killed Horicon resident Joseph Turcotte.

Skyler Crouse limps into Warren County Court on Monday for his arraignment on manslaughter and assault charges for the truck crash death of Horicon resident Joseph Turcotte.