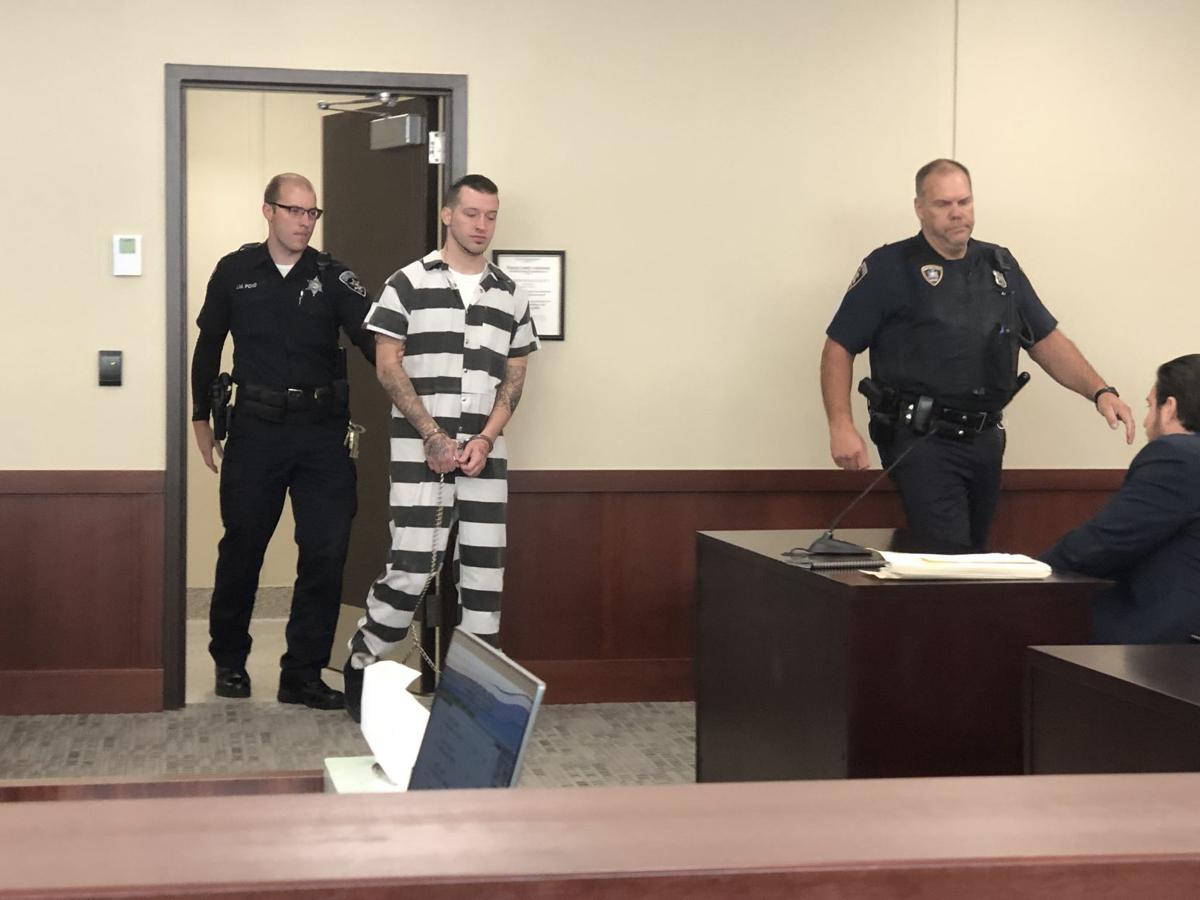 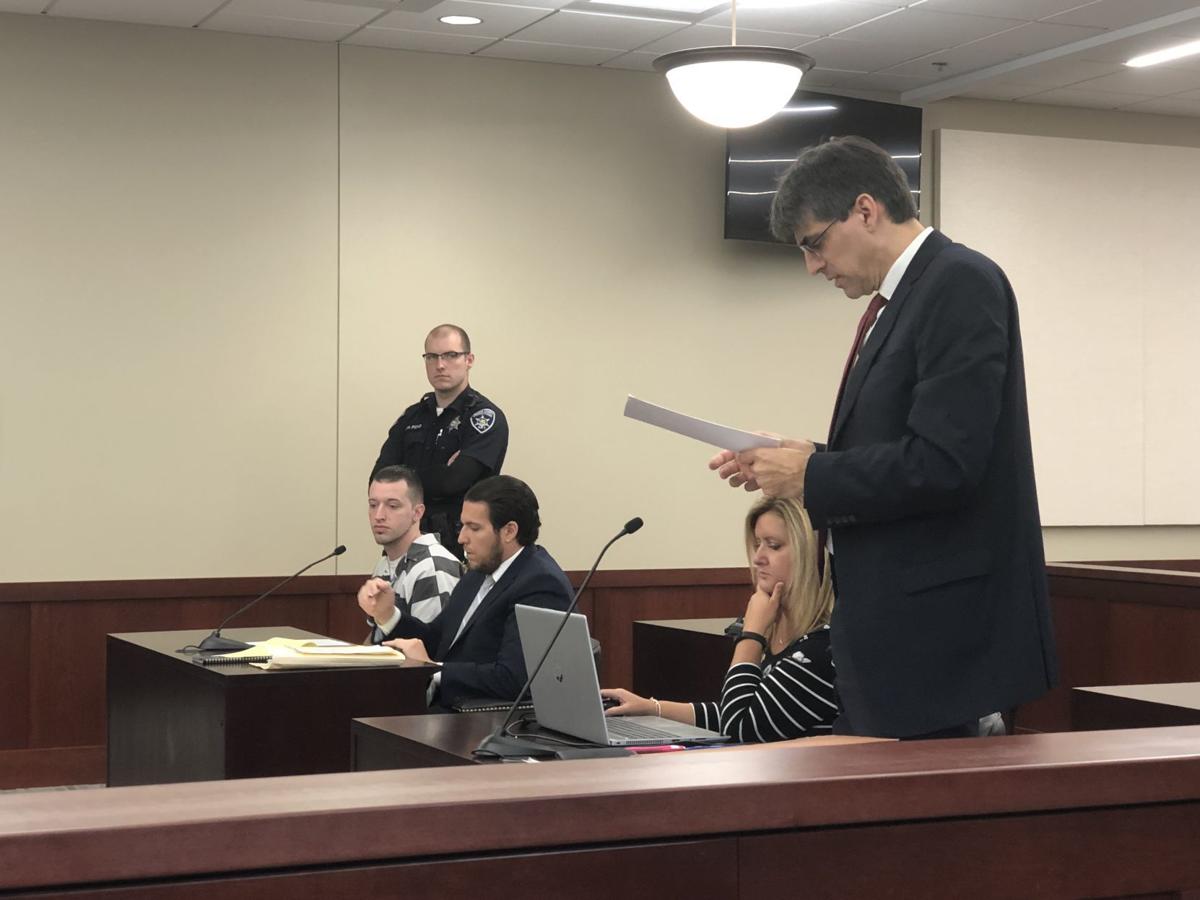 Warren County District Attorney Jason Carusone speaks Thursday during the court appearance of Jesse Breault, left in the jail jumpsuit, who pleaded guilty to first-degree manslaughter for a fatal stabbing in Queensbury.

QUEENSBURY — The Glens Falls man who stabbed a man to death in a parking lot last May pleaded guilty Wednesday to a reduced charge of first-degree manslaughter, agreeing to serve 18 years in state prison.

Jesse J. Breault pleaded guilty to first-degree manslaughter for the death of 36-year-old Queensbury resident Christopher Goss on May 24. He admitted stabbing Goss in the “upper back” with a nine-inch hunting knife that he brought to store parking lot for a confrontation that the two had arranged.

Breault, 26, agreed to a plea deal that includes a state prison sentence of 18 years, to be followed by 5 years on parole. A second-degree murder charge, which was punishable by up to 25-years-to-life in state prison, would be dismissed at sentencing as part of the plea deal.

He spoke in a quiet, emotionless voice as he told Warren County Judge John Hall what happened that early morning that Goss was killed.

He told Hall that he and Goss had an argument over a woman, and the two met and, as Hall termed it, “got in a physical altercation” outside Rick’s Bike Shop on Quaker Road in Queensbury in the pre-dawn hours.

He said he brought a knife with him that he retrieved from the floor of his car, and used on Goss.

“At some point you stabbed Mr. Goss?” Hall asked.

“Yes, your honor,” he replied.

He said he intended to seriously hurt Goss.

Breault also implicated his then-girlfriend as assisting him with removing evidence from the crime scene. Charges remain pending against her.

His lawyer, Derrick Hogan, said that his client accepted a plea deal “to put this behind him and accept the consequences.”

“It’s certainly an unfortunate situation, but he is accepting responsibility,” he said.

Warren County District Attorney Jason Carusone said he had no comment on the plea or decision to drop the murder charge, pending sentencing.

Breault also pleaded guilty Wednesday to a probation violation in Saratoga County Court, as he was on probation at the time of the stabbing for a 2014 felony burglary conviction in Moreau. Hogan said he faces a 2- to 6-year prison sentence for that case, which will likely be served concurrently to the stabbing case.

Relatives of Goss’ were in court for the plea and said they had no comment on the disposition.

Goss’ girlfriend, Ali Barton, was also in court, but said she had no comment other than to say she was “praying for justice.”

Police said Breault and Goss met up to fight over a dispute their girlfriends had been having. Authorities have not said what was at the root of the feud, however.

Goss was able to stagger to the front yard of a nearby home after he was stabbed, before he collapsed.

Breault and his girlfriend fled, but were arrested hours later after an investigation by the Warren County Sheriff’s Office and State Police.

Charges are still pending against Breault’s girlfriend, Ashley N. Bell, 29, of Queensbury, who is alleged to have accompanied him to the store. She was charged with tampering with physical evidence and hindering prosecution, both felonies.

She is accused of lying to police and assisting Breault in removing evidence from the crime scene, as police said he dropped his cellphone there and they returned to get it a short time later, before Goss’ body had been discovered.

She has pleaded not guilty, is free on bail and is due back in Queensbury Town Court on Oct. 15.

Goss was a former teacher in the Waterford school district who had recently been working in the real estate industry, according to his obituary. He had also formerly operated a bar in Glens Falls called McGinney’s Tavern.

His family asked that memorial donations in his name be made to Lake George Land Conservancy.

He could be released in about 15 1/2 years if he has no trouble in prison, Hogan said.

Warren County District Attorney Jason Carusone speaks Thursday during the court appearance of Jesse Breault, left in the jail jumpsuit, who pleaded guilty to first-degree manslaughter for a fatal stabbing in Queensbury.