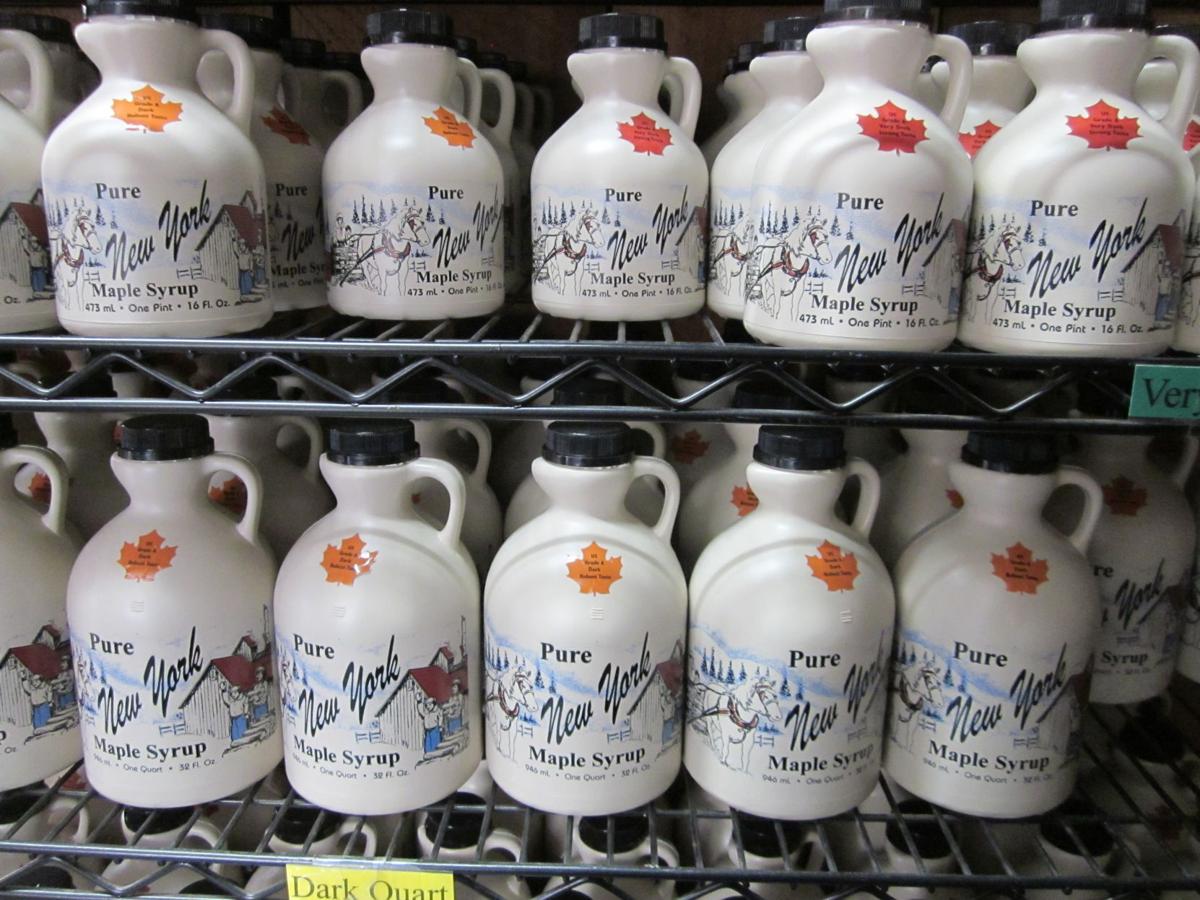 Jugs of maple syrup wait for customers at Wild Hill Maple in Jackson. 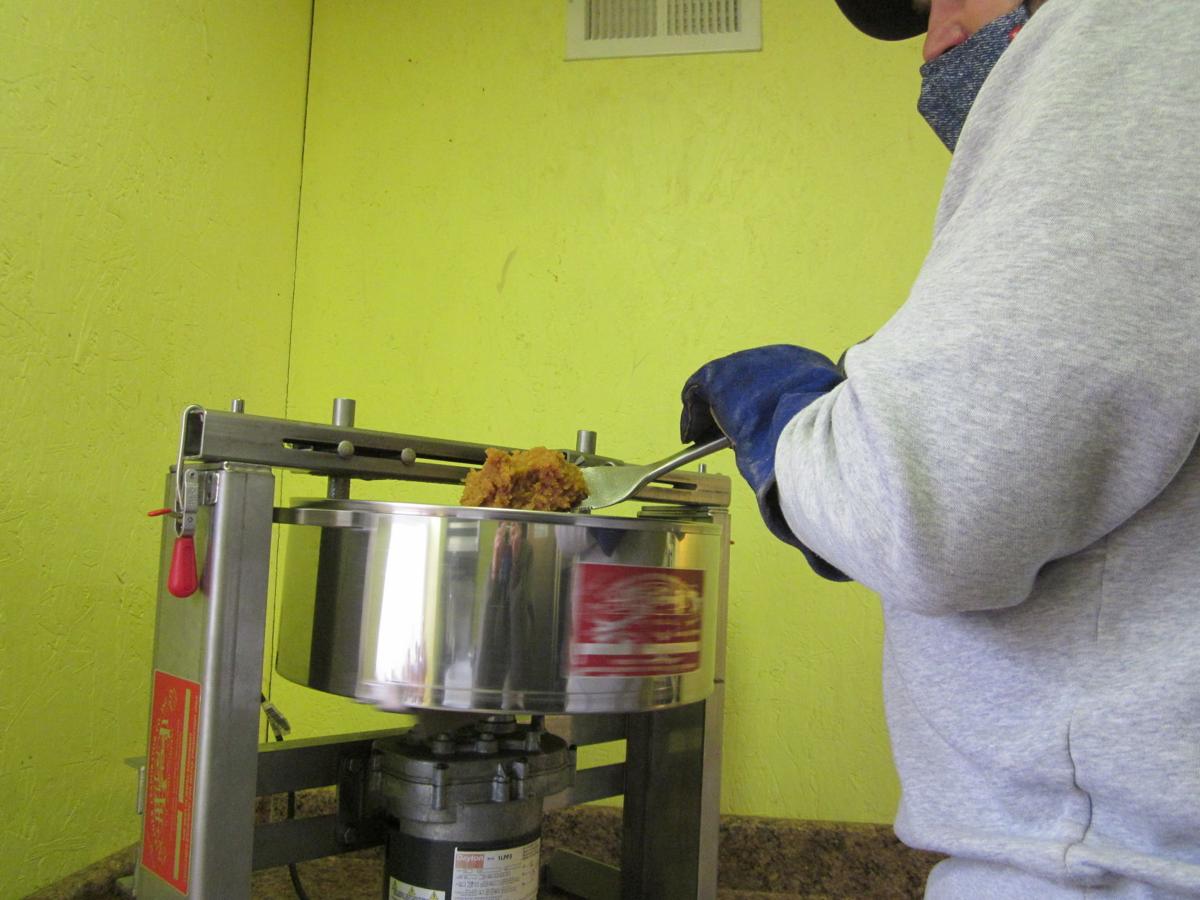 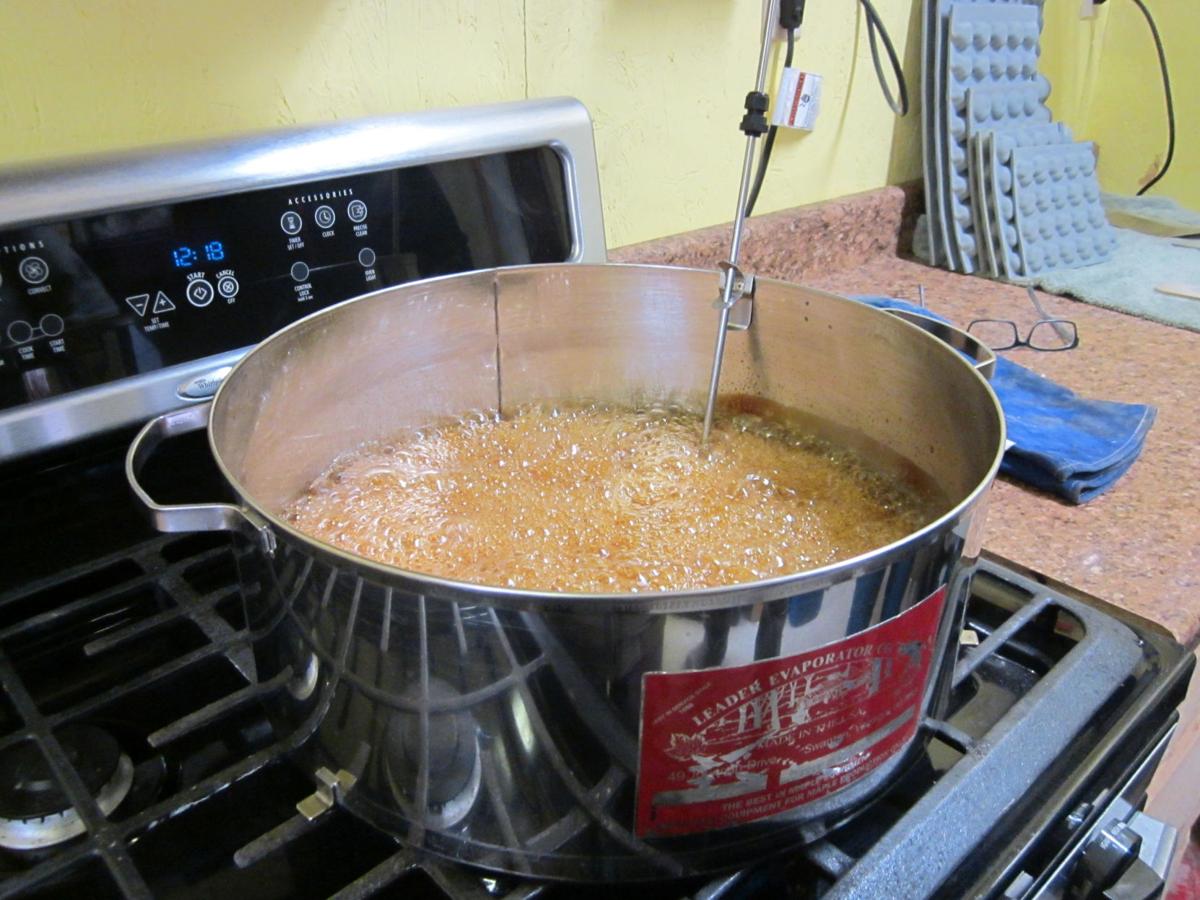 Maple syrup boils down to the sugar stage in the kitchen at Wild Hill Maple in Jackson. 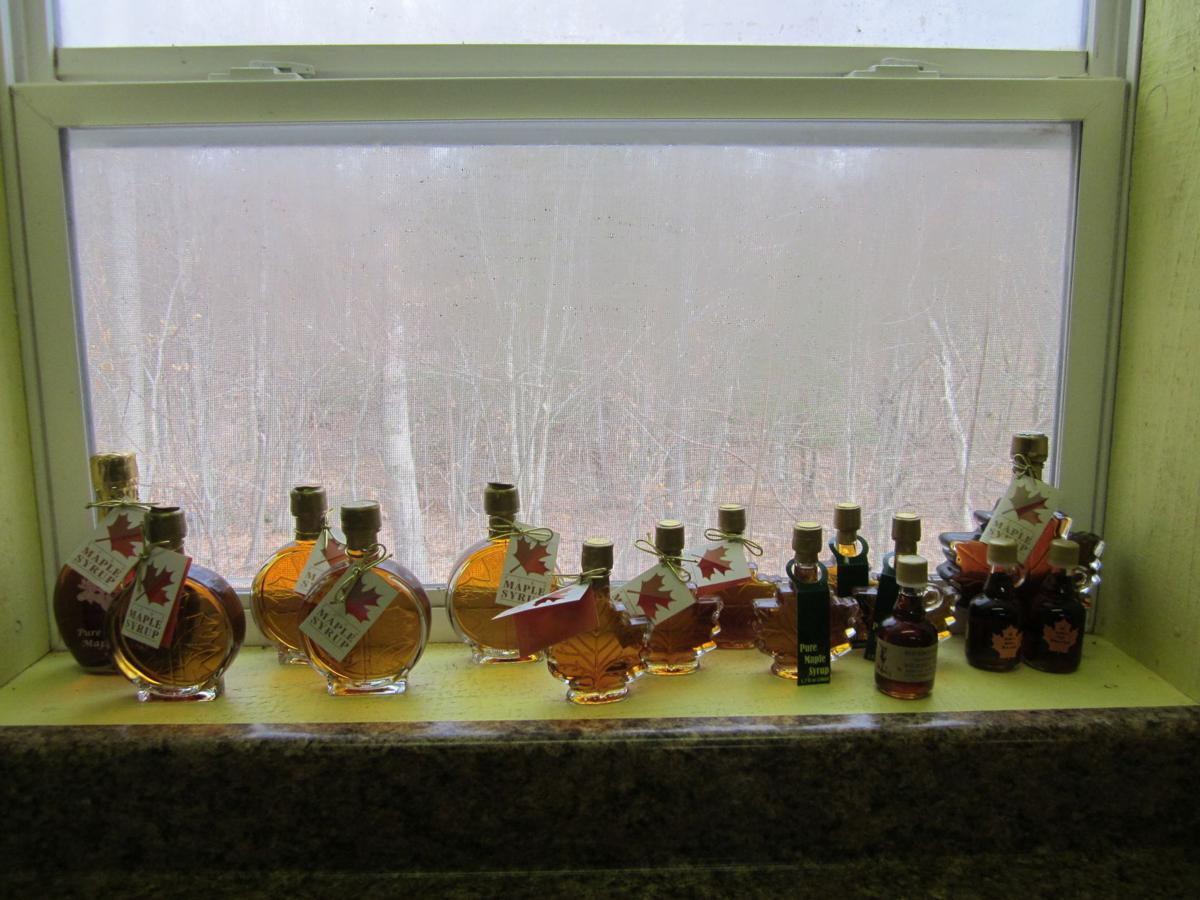 Decorative bottles of maple syrup line a windowsill looking out to the woods at Wild Hill Maple in Jackson. 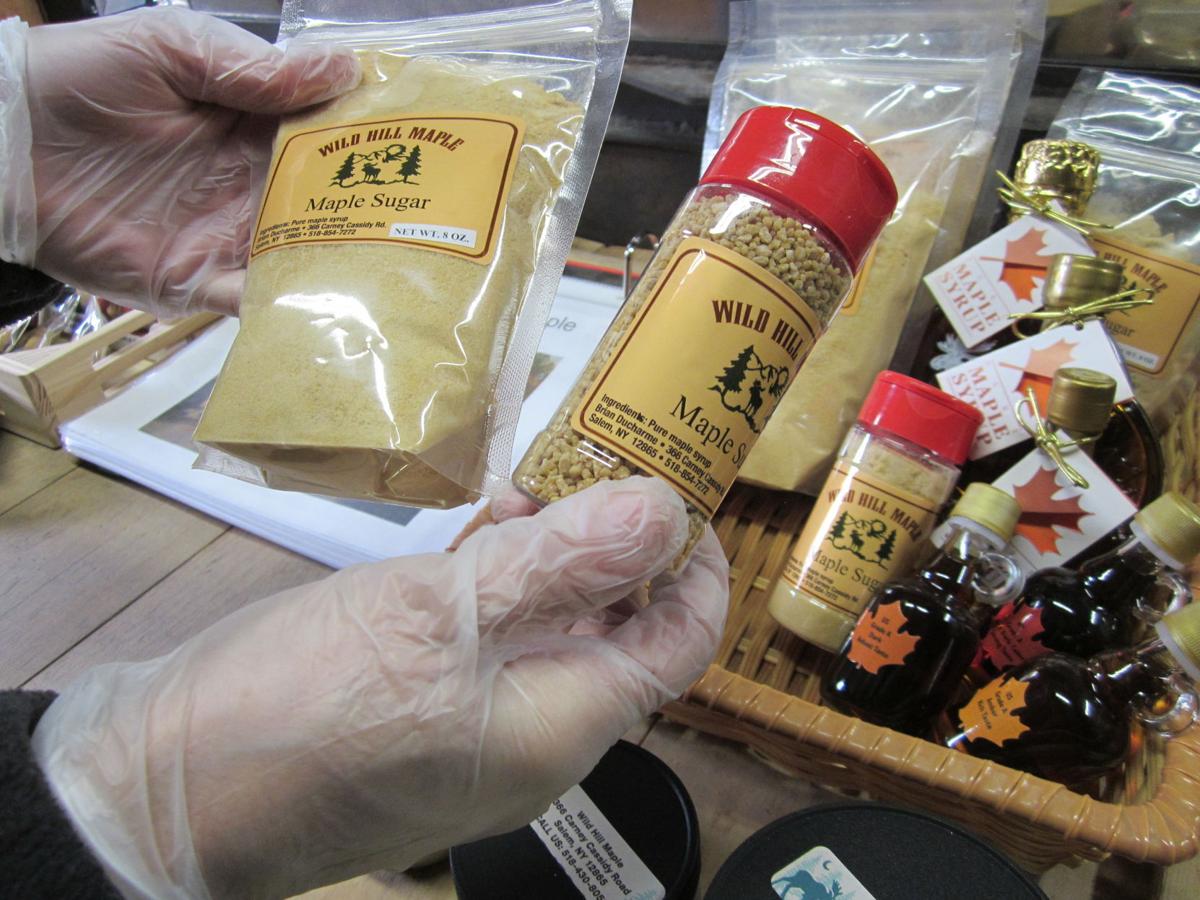 JACKSON — The pandemic may have forced cancellation of most official Maple Weekend events for the second year in a row, but maple producers are still boiling sap and finding ways to satisfy their customers’ maple cravings.

“The maple sap flows whether we have COVID or not,” said Stephanie Kelly, spokesperson for the Upper Hudson Maple Producers Association. The group represents more than 60 maple producers in upstate New York, with operations ranging from fewer than 100 taps to more than 10,000.

The state ordered pandemic shutdowns last year just before producers were about to open their sugarhouses and sales rooms for their annual maple celebration.

“The producers still had product available,” Kelly said. “They figured out how to get it to people in different ways. Some were already selling online. Others went online and got maple to people who wanted it.”

Since then, “we’ve learned a lot,” Kelly said.

Although social distancing requirements mean visitors can’t crowd around the steaming evaporators, producers can do curbside delivery for people who order ahead and let a limited number of masked people into their sales rooms, she said.

“People may have to enjoy their maple at their own kitchen table,” Kelly said.

Weather this year has delayed the start of the sugaring season.

“There’s been no real big runs yet,” said Brian Ducharme, co-owner with Julie Ryan of Wild Hill Maple in Jackson. As of Tuesday, “I have maybe a fifth of my normal crop. Usually I’d be at three-quarters by this time.”

Ducharme was philosophical about the delay.

“Everything is run by the weather,” he said.

Sap only runs when temperatures are below freezing at night and above freezing during the day. Trees may need several days of warmth to thaw after a spell of deep cold.

“That doesn’t mean we won’t have an extended season,” Ducharme said. “It could turn out to be great.”

“People are staying home and eating more pancakes,” he said. “When the economy goes down, our sales go up. People take more of the smaller luxuries.”

Sales received a boost from Ryan’s marketing efforts. She took Wild Hill’s maple to farmers markets in the Capital District, which broadened Wild Hill’s customer base. Now, buyers eager for a drive in the country are coming from the Albany area, Ducharme said.

The sap wasn’t flowing on Tuesday, so Ducharme was taking advantage of the slow time to make granulated maple sugar. The process involves boiling syrup to 260 to 280 degrees, depending on the syrup’s sugar content, barometric pressure and relative humidity. A shorter time and lower temperature make spreadable maple cream or a thick syrup that can be poured into candy molds.

At Wild Hill, “every candy is hand-poured,” Ducharme said. “The candy is all maple syrup. There’s nothing added.”

Customers can use granulated maple sugar as they would any other sugar.

Ryan discovered a market for coarser-grained sugar, which they sell as maple sprinkles.

Another popular item is maple bourbon: syrup aged in used bourbon barrels, which Ducharme gets from a distillery in Clifton Park. It contains no alcohol but acquires flavor from the charred oak staves. The maple-infused barrels go back to the distillery for a maple-flavored bourbon, then to a brewery for a maple-bourbon stout.

Maple sugaring is hard work over a short season, but Ducharme and Ryan have found a comfortable way to divide the labor. She hauls in the sap from the collection tank, and he processes and boils it. He makes the products, and she does the packaging and marketing.

“We’ve been very, very fortunate with this occupation,” Ducharme said.

Fourteen members of the Upper Hudson Maple Producers Association will welcome visitors this weekend and next (see accompanying list). Most will be open 10 a.m. to 4 p.m. Saturday and Sunday. Masks and social distancing are required.

Grounds can be cold and muddy, so dress for the weather.

Here are the participating producers in the Glens Falls region for the two Maple Weekends:

If you don’t see your favorite sugarhouse on the list, call to see if it is open, suggests Stephanie Kelly, spokesperson for the Upper Hudson Maple Producers Association. And for more information about specific sugarhouses, such as whether they’ll be boiling, contact the sugarhouse directly.

Nine test positive for COVID at one Warren County business

A business in Warren County has had eight employees test positive for COVID this week, as well as one contractor who also worked for the business.

A Chester man walked away with only a hand injury after he crashed into a stalled truck on the Northway on Wednesday.

Police: Tractor-trailer driver was more than twice the legal limit for intoxication

A tractor-trailer driver was arrested after police said he drove at more than twice the legal limit for intoxication.

A Glens Falls man was arrested on Thursday after police said he struck a woman with a baseball bat.

A North Creek man was seriously injured on Sunday in a motorcycle accident in Lake George.

Jugs of maple syrup wait for customers at Wild Hill Maple in Jackson.

Maple syrup boils down to the sugar stage in the kitchen at Wild Hill Maple in Jackson.

Decorative bottles of maple syrup line a windowsill looking out to the woods at Wild Hill Maple in Jackson.