You have run out of free articles. You can support our newsroom by joining at our lowest rate!
Already a subscriber?
Log in or Activate your account.
Loading&hellp
No thanks, return to homepage.
{{featured_button_text}}
1 of 6 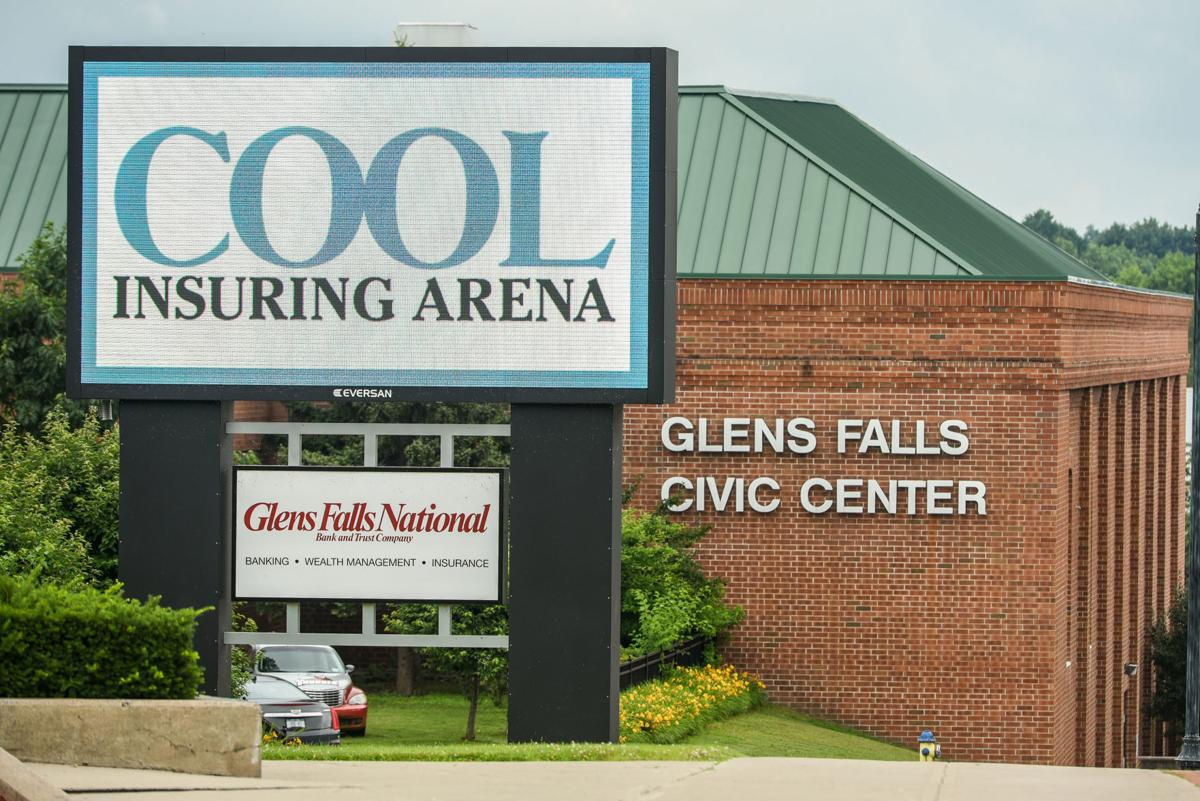 Improvements to energy use at the Civic Center were done by the same company the city of Glens Falls is looking into hiring for a citywide initiative. 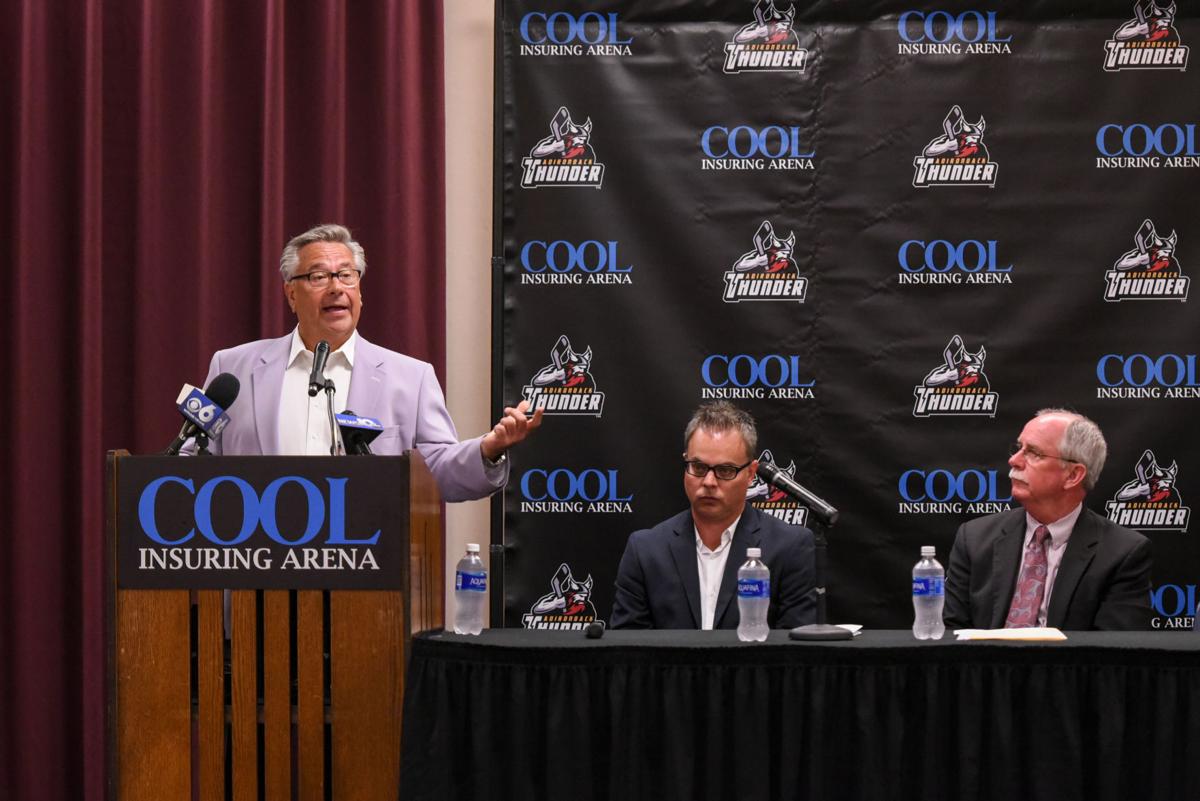 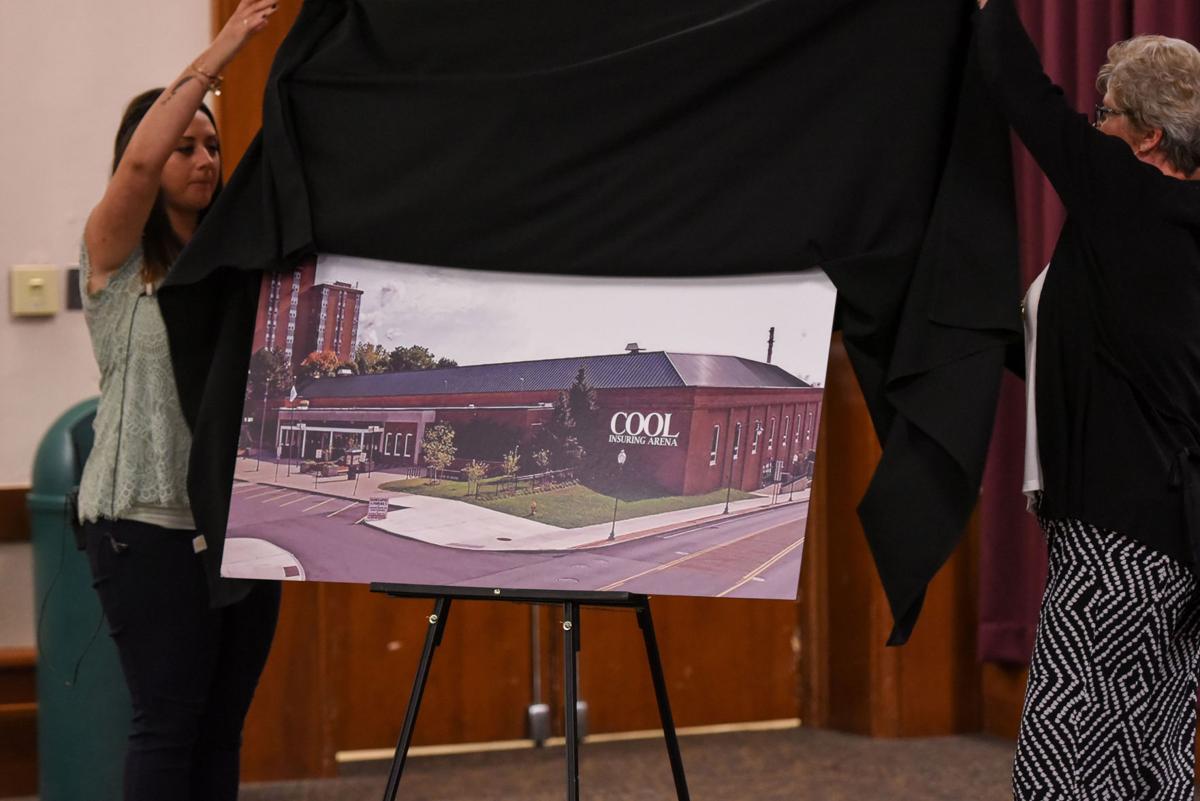 Cool Insuring Arena is unveiled to the public Tuesday during a news conference in Heritage Hall at the former Glens Falls Civic Center. 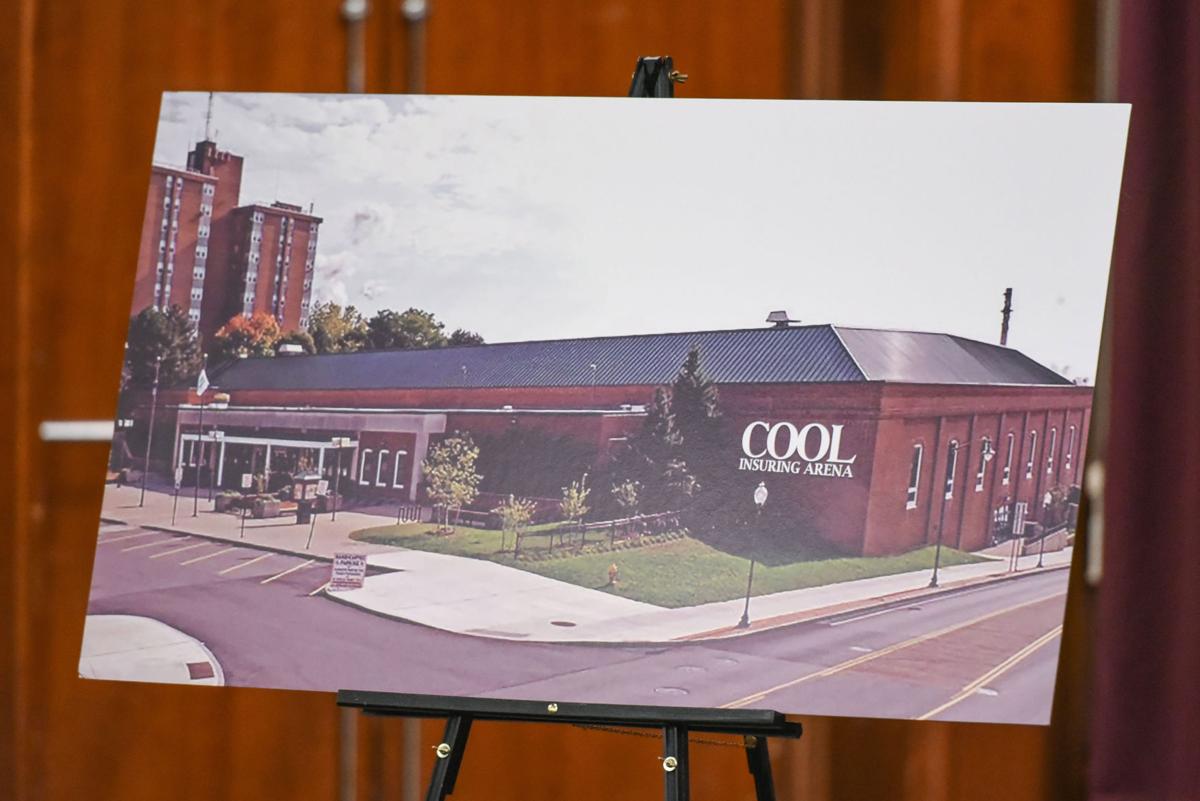 A computerized image of how the exterior of Cool Insuring Arena will look under a renaming of the Glens Falls Civic Center is unveiled to the public July 11 during a news conference. 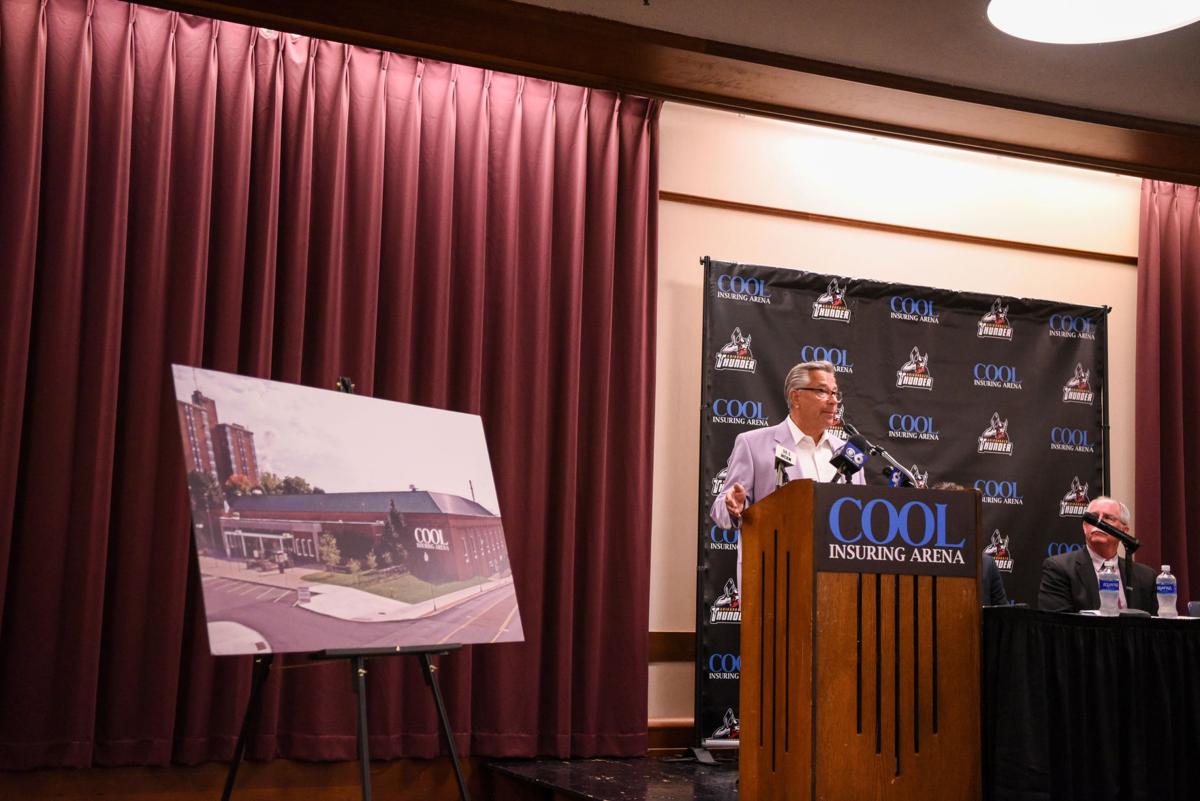 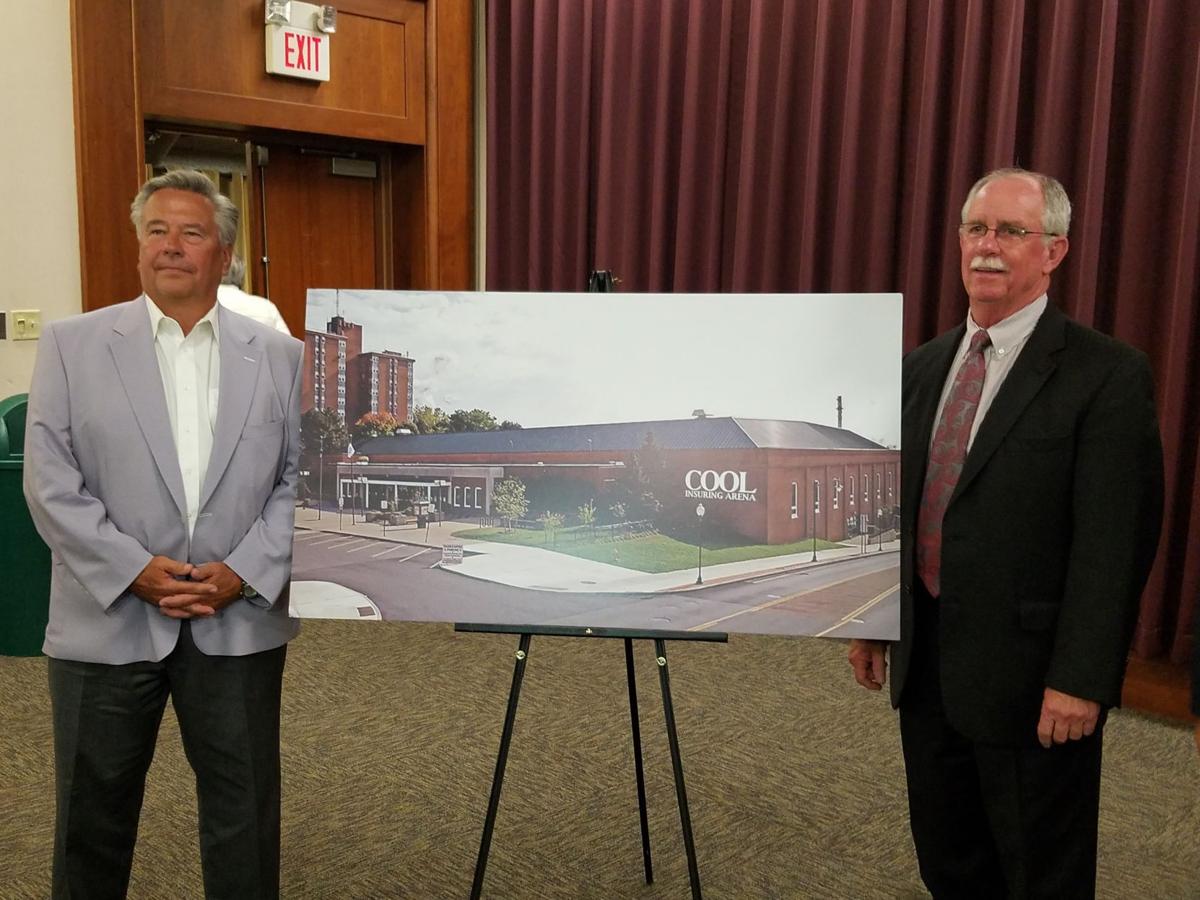 GLENS FALLS — The Cool Insuring Agency of Queensbury has purchased naming rights to the Glens Falls Civic Center as a tribute to the company’s longtime owner, Charles Cool, who was the first mayor of Glens Falls.

“We are acutely aware of what this building means to the community,” said Jack Bieniek, vice president of Cool Insuring, at a news conference with leaders of the Adirondack Civic Center Coalition at the arena’s Heritage Hall on Tuesday morning.

The Civic Center, opened in 1979, has been renamed Cool Insuring Arena under a five-year deal, which arena General Manager Jeff Mead called “a historic moment,” and Dan Burke, president of the Adirondack Civic Center Coalition board, called “yet another milestone in the history of this building.”

Neither Bieniek nor Burke would disclose the cost of the naming rights deal.

“It’s significant for us,” Bieniek said.

Burke said the deal is “fair to both of us.”

Bieniek said his agency obviously will “sell a few policies” as a result of the naming rights deal, but the primary motivation is to support the community and the company’s many insurance customers including the city of Glens Falls, Finch Paper, The Barton Group, Glens Falls Hospital, Miller Mechanical, and Hudson Headwaters Health Network.

Efforts to sell naming rights to the arena began in 2004, when the Glens Falls Civic Center Foundation, a nonprofit organization, formed a committee to seek naming rights sponsors for the arena, which the city of Glens Falls operated at the time.

Global Spectrum, which took over operation of the arena in 2008, and later the city’s economic development office continued the marketing effort, and eventually that effort was taken up by the Adirondack Civic Center Coalition. The coalition began operating the city-owned arena in January 2015, under a five-year lease with an option to buy the building.

The Adirondack Civic Center Coalition is a nonprofit organization of local business and civic leaders.

Burke said securing and retaining an anchor hockey tenant, renovating the building and increasing the number and variety of events were all steps that led to being able to sell naming rights.

The coalition on June 30 finalized purchase of the Adirondack Thunder ECHL hockey team, the arena’s anchor tenant, but the coalition still has debt for the purchase.

“I can’t tell you enough: We have a long way to go yet,” Burke said.

The state, Glens Falls National Bank and other contributors paid for a host of recent arena improvements, including a new outdoor marquee sign with video display, a new scoreboard and videoboard, new lighting, painting the ceiling beams, updating the sound system and renovating locker rooms.

“We’ve really gotten a lot done with the building over the last two years with our partners from New York state,” said Mead, the arena general manager.

Bieniek said purchasing naming rights is a continuation and expansion of contributions Cool Insuring made to the Civic Center coalition in 2014 and 2015.

He said former longtime Queesbury at-Large Supervisor Nicholas Caimano, a coalition board member, first pitched the concept of naming rights to him when the two were golfing in Florida in March.

Bieniek won the golf game that day, but Caimano and his fellow board members ultimately won the sale.

Burke said sale of naming rights has been on the coalition’s “strategic to-do list” since the group first leased the arena.

Glens Falls Councilman at-Large Dan Hall, who will be the Democratic mayoral candidate in November, spoke at the press conference and praised the coalition for turning around the city-owned arena.

Charles Cool, the first mayor of Glens Falls, was born in 1858.

At age 21, he purchase the Hartford Insurance Agency in Glens Falls and renamed it Cool Insurance.

In June 1908, Cool, as mayor, took a delegation of city residents on an excursion to Lake George to celebrate Gov. Charles Evans Hughes, a Glens Falls native, signing the city charter earlier that year.

Cool was on the boards of First National Bank of Glens Falls, the Union Telegraph Co. and Empire Theatre.

He was a Glens Falls volunteer firefighter, a member of the Elks and Masonic lodges, a member of Church of the Messiah, and an avid harness racing enthusiast.

Cool died in 1932, and the insurance agency has been operated by various partners since.

Source: Jack Bieniek, vice president of Cool Insuring, and the Charles Cool scrapbooks on file at the Folklife Center at Crandall Public Library.

Looking back at local history: July 12

Take a look back at local history. Here are the top stories for July 12 from one, five and 10 years ago.

Improvements to energy use at the Civic Center were done by the same company the city of Glens Falls is looking into hiring for a citywide initiative.

Cool Insuring Arena is unveiled to the public Tuesday during a news conference in Heritage Hall at the former Glens Falls Civic Center.

A computerized image of how the exterior of Cool Insuring Arena will look under a renaming of the Glens Falls Civic Center is unveiled to the public July 11 during a news conference.