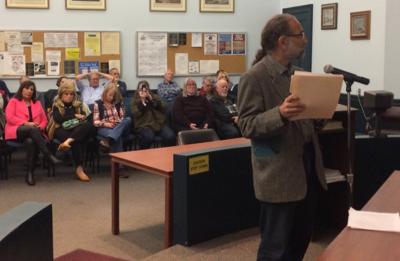 GLENS FALLS — The meeting at City Hall had been going on for over an hour.

A Glens Falls man was speaking about his experience of having a gay slur hurled in his direction at a downtown demonstration back in June.

From the back of the room, another man made a loud cough, followed immediately by the word, “Bullshit!” It was the type of rude behavior you might see at a junior high assembly, not at a meeting of the Common Council.

That summed up Tuesday night’s public hearing, where a line of 19 speakers made impassioned pleas for their First Amendment rights, civility and safety as the Common Council tries to address what it believes are disruptive demonstrations downtown. The speakers hailed from nearby communities such as Ballston Spa, Hudson Falls, South Glens Falls, Cambridge, Greenwich and Granville. Five of the speakers live in Glens Falls.

The meeting, at times, felt like you were eavesdropping on the vice principal’s office after a food fight in the cafeteria, with the Common Council sitting silently in judgment, trying to decide how much after-school detention was warranted.

The back-and-forth over who said what profanity and when continued unabated for nearly 90 minutes, and when some audience members began jeering from their seats, Mayor Hall hurled a warning from the bench that he would clear the hall if they could not behave.

Perhaps it’s Mayor Hall who is needed out at Centennial Circle.

At other times, the meeting was part civics lesson, with speakers invoking the words of founding fathers James Madison and Thomas Jefferson, while one speaker read the preamble to the U.S. Constitution. Positions the American Civil Liberties Union has taken on free speech were also used, oddly by the conservatives in attendance.

It was refreshing to hear citizens debating their constitutional rights, instead of the zoning of a dollar store, because despite the antics at the meeting, this is an important issue.

At least two speakers — one from each side — suggested that the two sides could work together without city involvement. Sadly, that ship has sailed, and the behavior Tuesday night did more to reinforce that compromise is unlikely.

The solutions are simple.

Don’t say anything on a city street that you wouldn’t say out loud during church.

Agree that any future rallies will not be held at the five-way interchange in the heart of the city because of the distraction to motorists. Despite all the talk Tuesday night, nobody’s free speech is going to be denied if the city decides City Park is a safer venue.

Most of the speakers Tuesday night do not live in Glens Falls. They should respect those that do.

That moment came when Lisa Capone, a Glens Falls resident, stood at the podium and informed all that she did not care about the politics one way or another. She did not care if you were pro-Trump or anti-Trump.

“This is about public safety,” Capone said defiantly. “This is truly about addressing the public safety of the citizens of Glens Falls.”

Walter Combs, another Glens Falls resident, said the groups’ presence in Centennial Circle was a distraction to drivers, while Claudia Braymer said she represented several neighbors in urging the council to pass the restrictions on the rallies.

The activists should listen to these Glens Falls citizens. They should respect their wishes and the rules that the city chooses to impose.

If they can’t do that, they have the freedom to go elsewhere.

Ken Tingley is Editor of The Post-Star in Glens Falls, and writes a regular blog called "The Front Page." He can be reached via email at tingley@poststar.com.

It was judged that the use of a profanity in this commentary was justified to capture the tone of the meeting.

Common Council gets an earful on protest regulations

No action was taken Tuesday night on proposed regulations for Glens Falls governing political protests and rallies, but the Common Council received plenty of input all the same.

COMMENTARY: Facebook needs to be held to a much higher standard

Facebook must enforce standards of truth and accuracy in the political advertising it runs.

COMMENTARY: Glens Falls Hospital did not do right by Salem

The town of Salem asked Glens Falls Hospital to "let them go" when it comes to the town's health clinic. It is working with Hudson Headwaters to have mobile van provide for the residents.

BLOG: One protest group condemns actions of another

After Saturday’s protest in downtown Glens Falls, I was one of four people who received an email from David R. Van Scoy of the American Patrio…

BLOG: Should we worry about threats?

After The Post-Star posted its story about the concern that one group of protesters had about another in Glens Falls, the following comment wa…

Rep. Elise Stefanik says she wants more transparency about hearings where she can be present any time that she wants. It was part of a week of political shenanigans that we could use less of.

COMMENTARY: It's not what the kids have, but what they need

Another small school seems set against a merger that might provide more opportunities for a well-rounded education for their children.

BLOG: Things are looking up on South Street

With a new restaurant anchoring the north end of South Street and the presence of Glens Falls National Bank and The Empire Theater building, the former Street of Dreams is evolving.

COMMENTARY: Your vote can really make a difference in local elections

Election Day is upon us again, but the local elections draw less than half of us to the polls, even though there is more of a chance that our votes will make more of a difference.