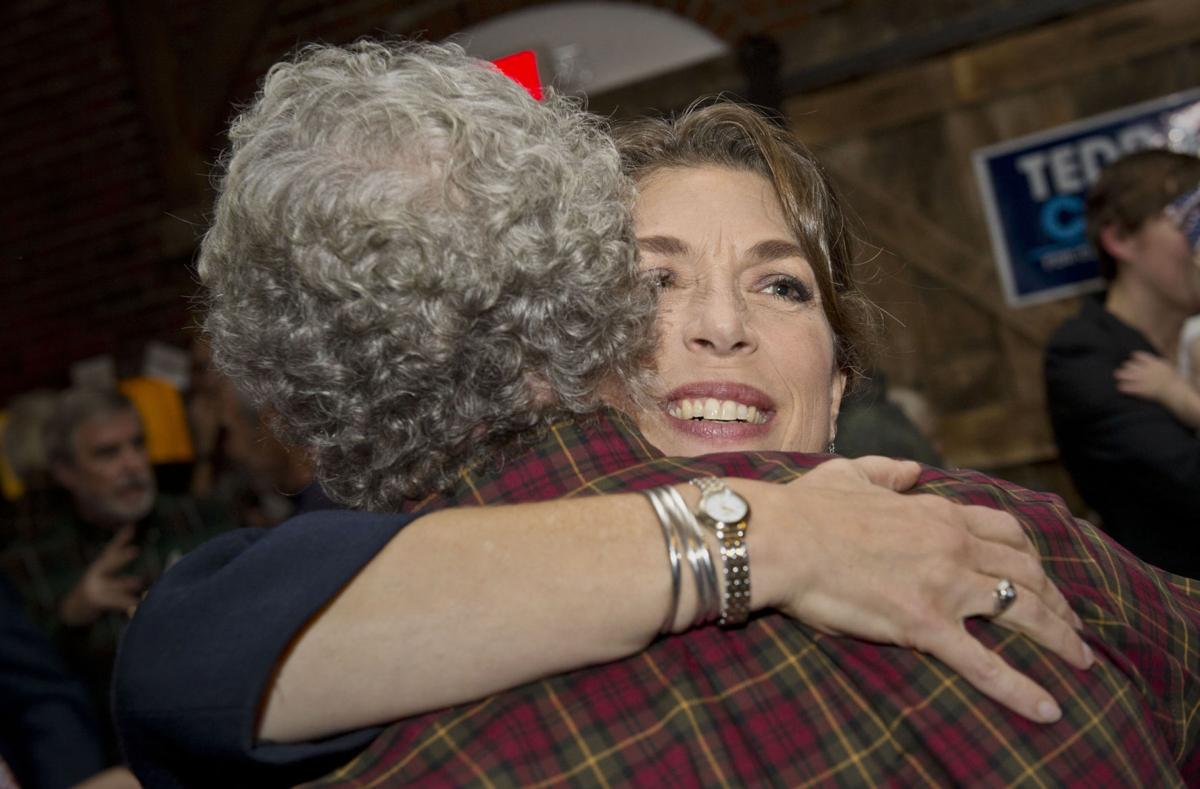 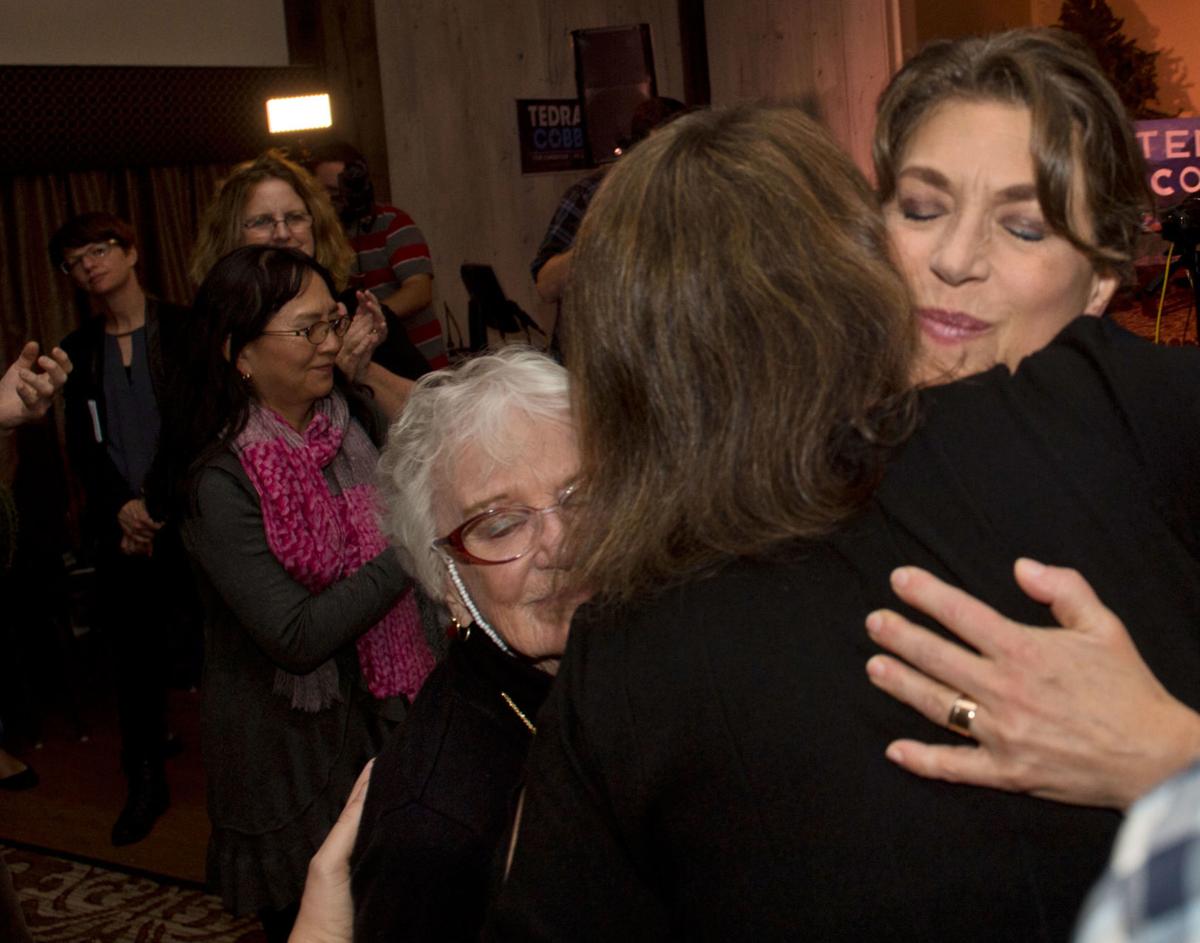 Supporters line up to hug NY-21 Democratic candidate Tedra Cobb on Tuesday night after she gave her concession speech at a gathering in Canton.

With the 2018 election in the books, NY-21 Democratic candidate Tedra Cobb is already looking ahead to 2020.

Cobb lost to U.S. Rep. Elise Stefanik, R-Willsboro, 56 percent to 41 percent, according to unofficial returns with 554 out of 556 election districts reporting.

Cobb said Tuesday to reporters at the Best Western in Canton that she plans to run again. She was encouraged that she lost by only 15 percentage points, which is less than half of the margin that Democrat Mike Derrick lost to Stefanik in 2016.

Cobb did not make herself available for a follow-up interview on Wednesday, but her campaign issued a statement Wednesday thanking the 90,526 people who voted for her.

“I ran this race to represent the interests of all northern New Yorkers — to fight for affordable health care for everyone and to protect our environment and Social Security and Medicare,” she said in a news release. “Make no mistake, this race and these results should be a wake-up call to Representative Stefanik. The residents of Northern New York are watching her votes and will hold her accountable.”

Cobb thanked supporters for welcoming her into their home, volunteering and donating to her campaign.

“As a result, we broke fundraising records without taking a dime of corporate PAC money, and we talked to over 130,000 voters. This congressional seat belongs to us, not corporations or special interests, and in 2020, the people will take it back,” she said.

Kahn thanked her supporters in a Facebook post and recalled an interview she had with North Country Public Radio.

“I said that the country wants a third party and I am proud to be part of the independent voter and independent candidate movement. I believe the Green Party is uniquely positioned to grow and represents the concerns of America including environmental issues, social justice, grassroots wisdom and peace building,” she said.

Kahn received far fewer votes than Green Party candidate Matt Funiciello did in the 2016 congressional race. Funiciello received about 4.5 percent of the vote.

During her victory remarks, Stefanik congratulated both Cobb and Kahn for having the courage to run in this political climate.

Stefanik told reporters Tuesday night that she was pleased by her double-digit margin of victory.

“It shows that we’re getting cross-party support,” she said.

Stefanik won in all 12 counties of the district. Cobb did well in two of the three counties where registered Democrats outnumber registered Republicans. Cobb only lost by 93 votes in Clinton County. She also trailed Stefanik 47.5 to 51.5 percent in Franklin County.

However, Stefanik beat Cobb by over 3,100 votes in her home base of St. Lawrence County, the other county in which Democrats outnumber Republicans.

Even though Republicans outnumber Democrats by nearly 4,000 votes in Essex County, Cobb only lost by 168 votes.

Stefanik crushed Cobb in the Republican-dominated counties of Fulton, Hamilton, Herkimer, Lewis, Saratoga and Washington counties. The congresswoman also squeaked out a win in Warren County by 811 votes.

When asked to comment on Cobb possibly running again, Stefanik campaign spokesman Lenny Alcivar said that Stefanik ran on her record of delivering results against an ill-prepared candidate who lacked substance and was on the wrong side of issues. He pointed to Stefanik’s wide margin of victory.

Stefanik will be in the minority party in the House for the first time during her tenure.

Stefanik said she was disappointed that she would be losing some of her Republican colleagues, including Republican U.S. Rep. John Faso, who lost to Democrat Antonio Delgado in the NY-19 District.

Also losing his seat was U.S. Rep. Carlos Curbelo, in Florida’s 26th Congressional District, with whom she worked with on some climate change issues.

Stefanik said she did not think being in the minority would be an issue.

“I have a very strong record of working across the aisle,” she said.

Stefanik said she worked effectively with President Barack Obama, who was president during her first term.

During the campaign trail, she cited legislation she sponsored that Obama signed into law to repeal the auto enrollment mandate, which required employers with more than 200 full-time workers to automatically enroll new employees to an employer-sponsored plan.

Among the issues that Stefanik would like to focus on in the new term are expanding access to rural broadband and seeing the passage of the Farm Bill.

She said she didn’t mind that she is no longer the youngest woman elected to Congress, as Alexandria Ocasio-Cortez won her seat in the NY-14 District, which represents parts of Queens and Brooklyn.

The following is a county-by-county breakdown of local counties in the NY-21 district with 554 out of 556 districts reporting. Results have not been reported from two districts in Warren County.

Watertown Daily Times reporter Abraham Kenmore contributed to this story. Michael Goot covers politics, business, the city of Glens Falls and the town and village of Lake George. Reach him at 518-742-3320 or mgoot@poststar.com and follow his blog at http://poststar.com/blogs/michael_goot/.

Election Day 2018: Find out who took home the big contests across the region, state

The following is a county-by-county breakdown of local counties in the NY-21 district with 554 out of 556 districts reporting. Results have not been reported from two districts in Warren County.

The following is a county-by-county breakdown of local counties in the NY-21 district with 554 out of 556 districts reporting. Results have no…

Supporters line up to hug NY-21 Democratic candidate Tedra Cobb on Tuesday night after she gave her concession speech at a gathering in Canton.