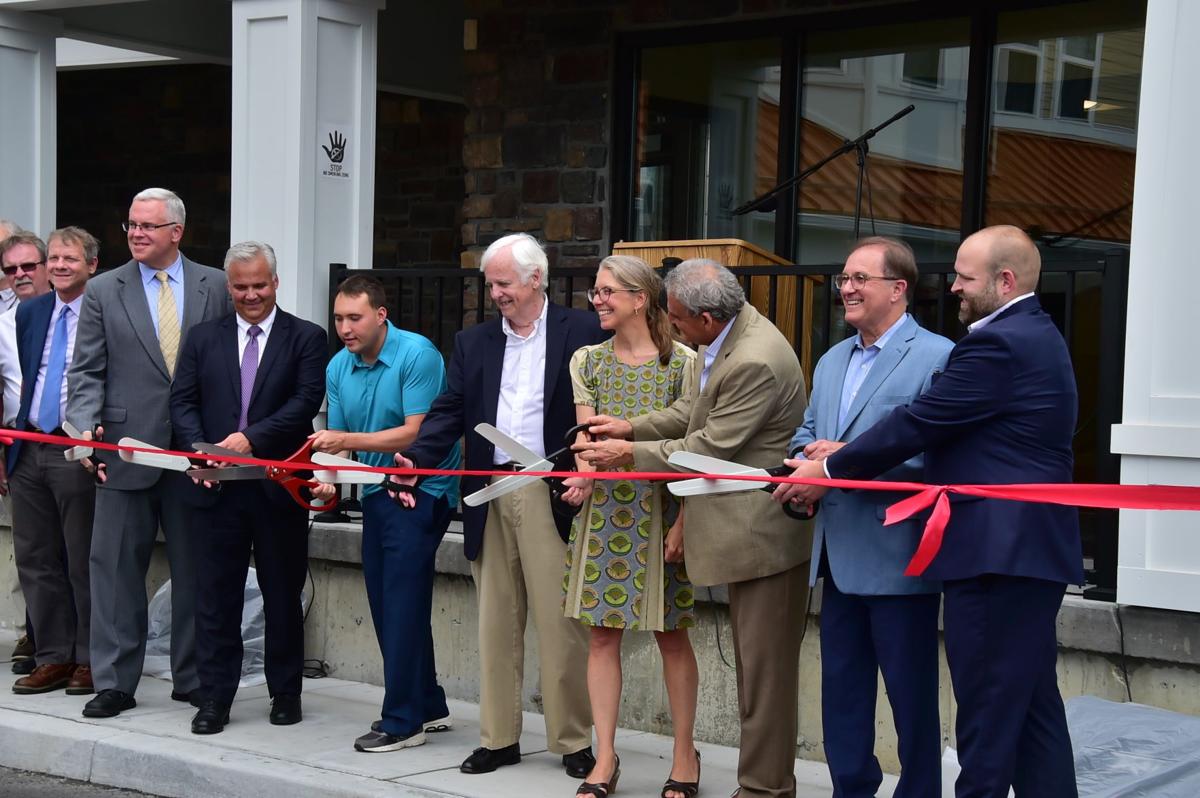 A ribbon-cutting ceremony was held at Broad Street Commons in Glens Falls on Wednesday to mark the opening of the workforce housing apartment complex. 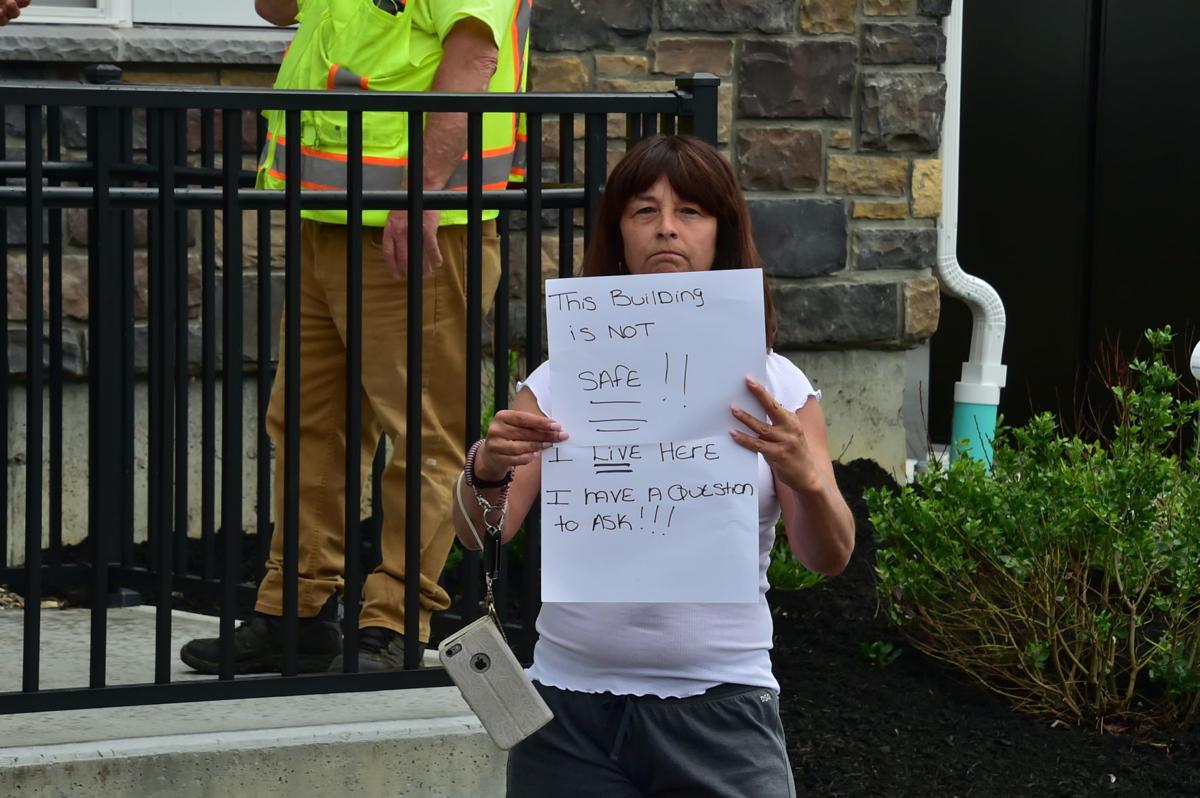 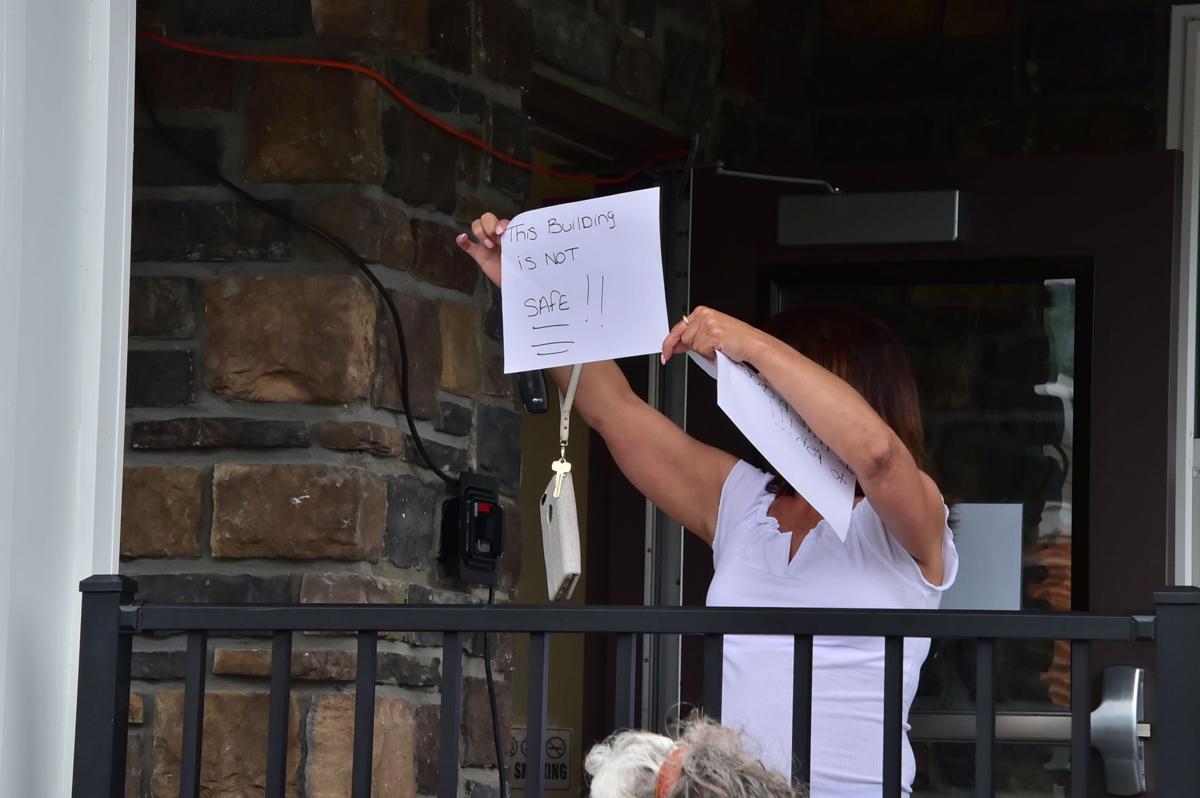 GLENS FALLS — An event celebrating the opening of Broad Street Commons was disrupted last week by a tenant complaining of frequent criminal activity at the workforce housing complex, which she said has been ignored by property management for months.

Sherry Lopez, a third-floor resident of the 186 Broad St. apartment complex, attended a ribbon-cutting for the building carrying a sign that read: “This building is not safe!!”

She said the four-story, 72-unit apartment complex is riddled with crime — including drug sales, domestic violence and incidents of gang violence — which the building’s management refuses to address despite multiple complaints.

Police, she added, visit the complex multiple times a day.

“It’s just downright disgusting and these people aren’t doing anything about it,” Lopez said.

Lopez’s alleged complaints of criminal activity come on the heels of a July 4 incident at the complex where police say 19-year-old Tyler Zaugg beat his 7-week-old son with a closed fist, resulting in a brain injury and cracked ribs. The infant has since died from his injuries.

“I’m not here all the time, but let me tell you, the times that I am, there’s domestic violence, heavy loads of drugs in the back parking,” Lopez said. “We had the baby murder.”

At one point, Mayor Dan Hall pulled aside Lopez — who plans to move out of her apartment despite a yearlong lease agreement — for a conversation.

“I couldn’t really talk to her, she just wanted to complain, but I told her that we would try to take a look to see what we can do and work with the developer,” Hall said.

Hall acknowledged that there have been an “abnormal amount of calls” to the complex, but noted around 25% of the calls involved the same individual, who has since been relocated.

He said the Village Green apartment complex in the city also saw heavy police presence when it first opened, but has since sorted itself out.

Hall said he’s confident the building’s developers will sort through any issues in the near future, but noted a moratorium on evictions in place due to the pandemic has slowed the process of evicting any nuisance residents.

“It’s a brand new project. Put 72 apartments with all these people together and things are going to happen. Hopefully we can weed it out,” Hall said.

Ken Regan, the vice president of Regan Development, the building’s developer, also met with Lopez and another resident, Alice Cook, privately to address their concerns.

Cook, who was returning to the building following the ceremony, had similar complaints about the building. She said she has witnessed multiple domestic violence incidents and walks quickly through the parking lot when returning home over concerns about drug dealers.

“You’re so afraid to come out here it’s not even funny,” she said. “I carry Mace most of the time.”

Regan, following the meeting, said building management has not received any complaints regarding criminal activity at the facility other than the Zaugg incident, which he said was an unforeseen event.

He added that residents undergo a stringent background check and that the property’s two on-site managers follow up with any complaints and contact authorities when necessary.

Security cameras are also on each floor and at each of the building’s exits, he said.

“I’m the owner of the property. I want to make sure the property is pristine. This is an asset for us, as well as the promises we made to the community to make this workable,” Regan said.

He added that Lopez was unable to provide specific details about the alleged incidents — including when they occurred and who was involved — and questioned the validity of some of the claims.

“Just because somebody says something does not mean it’s true,” Regan said. “There’s always two sides to the story.”

Still, Regan said there have been more police calls to the complex calls than he “would have expected.”

“These are things that we deal with from the property management side and the police side and then follow up that way,” he said.

Mandi Eason, the property manager for Broad Street Commons, said most of the police activity at the facility relates to minor disagreements between residents, including noise complaints.

“I was very shocked,” she said, referring to Lopez’s complaints. “I haven’t heard of anybody else having that issue where they don’t feel safe.”

Randy Burton, a first-floor resident made available for interview by building management, said safety is not a concern for him.

Burton, who saw Lopez carrying the sign, said he was surprised to learn someone living at the complex felt unsafe, adding that management is readily accessible and have been quick to respond to any of his needs.

“Unfortunately, you always get someone in a crowd that is going to try can cause trouble,” Burton said.

A ribbon-cutting ceremony was held at Broad Street Commons in Glens Falls on Wednesday to mark the opening of the workforce housing apartment complex.