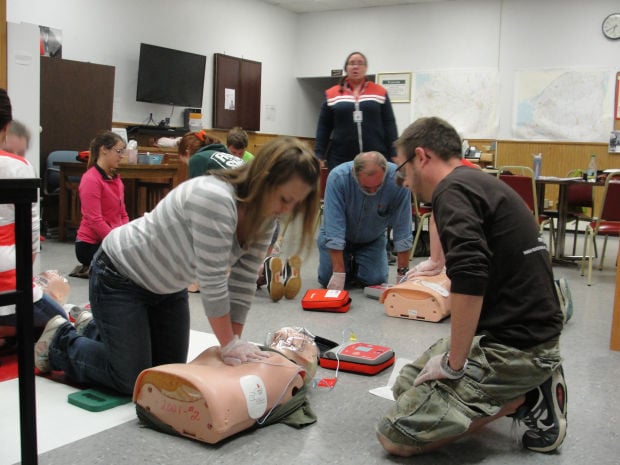 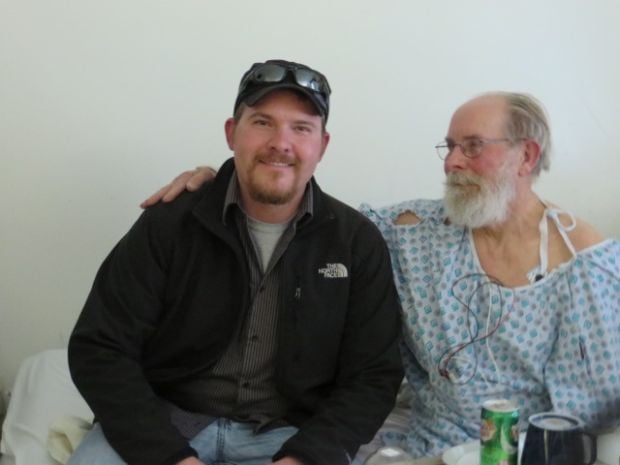 Terry Archard of Middle Granville, right, is pictured in the hospital in March, about five days after he experienced a cardiac arrest in a Price Chopper in Granville and was saved by Harry Ralph, left, a Vermont man who gave him CPR and used an automated external defibrillator to save his life. (Photo courtesy of Sandra Smith) 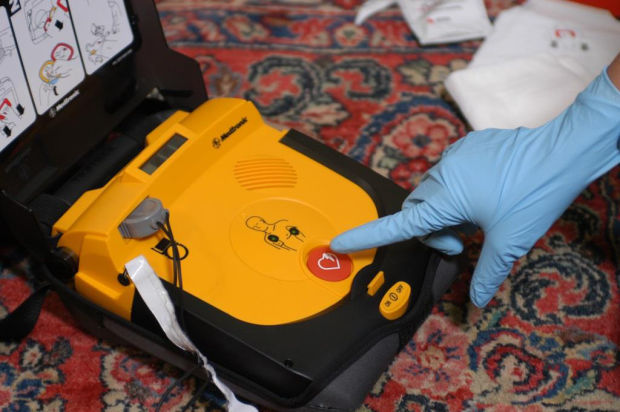 GRANVILLE -- It was a life or death scenario for Terry Archard, a Middle Granville man whose heart stopped in a supermarket as he reached for a roll of paper towels.

That afternoon, March 10, a Danby, Vermont, couple, Harry and Lindsay Ralph, happened to be standing in line in the afternoon at the Granville Price Chopper when they heard someone yell that a man fell in one of the aisles, the exact one that lined up with their checkout line.

The call came from Laurel Wolfe, whom Archard recently met and had driven to the grocery store since her car wasn’t working.

Luckily, Archard’s head landed on her soft winter boots, and she knew to call for a cardiac ambulance, said Archard’s sister, Sandra Smith.

Harry Ralph, who works for Green Mountain Power, a Vermont utility company, is required to be trained in CPR and how to use an automated external defibrillator.

In New York state, public buildings, health clubs, dental offices and other places are required to have AEDs, but it’s up to private sector businesses whether they purchase one.

Harry saw people who appeared to have first responder jackets on and figured “they’d probably be able to take care of it, but then my wife said, ‘Maybe you should go over and check,’” he said.

What followed was a blood-pumping life-changing experience as Harry found Archard, 72, on the floor.

“I knelt down beside Terry and another gentleman to check for breathing. He wasn’t breathing, and his face was turning blue, so I grabbed the jacket from a woman with him and put it under his neck to prop open his airway, checking for breathing again. There was nothing, so I had another gentleman there move out of the way and I started CPR,” Harry easily recalled months later.

Instead of mouth-to-mouth, Harry gave Archard chest compressions for CPR. Luckily, all Price Choppers have the portable electronic devices on hand and people trained to use them, so Ralph had an employee fetch the little box that housed the life-saving machine. The AEDs give simple audio and visual commands after diagnosing life-threatening cardiac arrhythmias.

He continued to do chest compressions and placed the defibrillator’s pads on Archard’s chest. The defibrillator advised him to shock Archard, so he did.

“We ended up shocking him three times. Then the rescue squad got there and got their machine hooked up,” Harry said.

It’s rare for someone who suffers sudden cardiac arrest to survive, but Archard’s success story was dependent on a number of factors, explained his doctor.

“The person who was with him called for help and there happened to be a bystander there who knew CPR and started CPR, and they had a defibrillator in that store, and even more impressive is that somebody was there who knew how to use it,” said Dr. David Judkins, a cardiologist at Adirondack Cardiology, a division of Glens Falls Hospital.

Price Chopper is one of 2,037 businesses in New York state to have defibrillators on site, according to data from the state Health Department.

The private sector is not required to have the devices on hand, but in 2008, Price Chopper spokeswoman Mona Golub said the store decided to have one at all of its locations — totalling 144 — spanning six states, plus the warehouse and distribution center.

Golub said the store has had more than a dozen documented times where lives were saved by the device and someone who knew how to use it. She said more than 1,000 of the store’s employees are trained on a volunteer basis.

“We’ve set a goal to ensure there are at least nine trained staff at every location,” Golub said.

“We pay for the training, and the response from our teammates has been really fabulous to the point where we always have a teammate in the store who is trained,” Golub said.

Price Chopper partners with Adirondack Health and Wellness to train employees and make sure the equipment is in proper working order.

In the U.S., roughly 424,000 people are recorded as experiencing sudden cardiac arrest, and one out of 10 people survive, according to the Sudden Cardiac Arrest Foundation.

When someone intervenes who knows CPR and how to use an automated external defibrillators before an ambulance arrives, the survival rate increases to four out of 10.

Sudden cardiac arrest, different from a heart attack, is often caused by ventricular fibrillation, or an abnormality in the heart’s electrical system, which causes blood to stop flowing and the person to collapse suddenly. Sudden cardiac arrest victims are clinically dead and require someone to revive them immediately.

For Judkins, Archard’s story emphasizes the importance of “community care.” Coincidentally, he said, Ralph was trained in CPR and AED use by a Glens Falls Hospital respiratory therapist.

“We’re a community hospital, but it takes more than just doctors and nurses to take care of people. Had the person not took the time to learn CPR and how to use an AED, Terry wouldn’t be here,” Judkins said, adding that the first responders from Granville who gave him medications to stabilize his heart rhythm on the way to Glens Falls Hospital were also key.

At Glens Falls Hospital, they cooled Archard down with mild therapeutic hypothermia to protect his brain.

“A couple days later he came off the ventilator. We warmed him up and he was neurologically intact,” Judkins said.

Days later, he had a triple bypass operation in Albany and headed back to Glens Falls for cardiac rehabilitation.

“Time just stands still for me now. Time moves so slowly. I never experienced something like this. I’m a very fortunate person to be here talking to you now,” Archard said. “I’m 72 years old and I’ve been given a new life. I have a new heart. My heart’s as good as new, and I’ve been given another chance to do things.”

For Archard, the question still lingers: “How do you thank someone for saving your life?”

Now he’s ready for another pursuit: learning CPR and how to use a defibrillator.

“I promised the doctor I would learn how to do CPR, and I think the main thing is to be able to help other people, knowing what to do and not to panic, but to be prepared,” Archard said.

“They’re pretty simple to operate, but they should be operated by someone who has the training and knows how to use the device,” Ferris said.

The Red Cross offers different levels for training the public, including at its Warren Street facility in Glens Falls.

“I know the devices do save lives, as is the case here,” Ferris said.

Judkins said everyone should consider getting trained.

“It only takes about an hour to learn CPR, and you no longer have to give mouth to mouth, you can use heart compressions,” Judkins said.

Archard doesn’t remember the events that saved his life, but when he saw Harry just before his triple bypass, he recognized him. Coincidentally, he’d seen him before because he follows the bluegrass band in which Harry performs called Bear Tracks, Archard’s sister said.

AEDs are in many businesses

According to a July report provided by the state Health Department, 2,037 private businesses report having AEDs, or automated external defibrillators, in their establishments.

Businesses in the private sector are not required to have AEDs on hand, but they are required to report their usage to the state Department of Health.

The following is a breakdown of reported trained providers and AED units in some of the state’s 19 Regional Emergency Medical Services Councils:

A Chester resident has turned in the rifle belong to state police that the agency has been trying to find.

Six more Warren County residents have caught coronavirus due to unsafe practices at work, Warren County Health Services said. That brings the two-day total of people who got sick at work to 11, out of 28 people infected.

A Hudson Falls man has been arrested after police said he robbed the Courtyard Marriott in Lake George.

Four members of the Amish community were transported to Glens Falls Hospital after their horse and buggies were struck by an SUV.

Police have released the names of the drivers involved in a Hampton crash that injured three members of the Amish community.

A Whitehall man was seriously injured on Thursday afternoon after he lost control of his ATV and it fell on top of him, according to police.

More than 20 officers belonging to the Glens Falls Police Department have faced some type of disciplinary action in the past five years for a wide range of offenses, according nearly 600 pages of police records obtained by The Post-Star.

Terry Archard of Middle Granville, right, is pictured in the hospital in March, about five days after he experienced a cardiac arrest in a Price Chopper in Granville and was saved by Harry Ralph, left, a Vermont man who gave him CPR and used an automated external defibrillator to save his life. (Photo courtesy of Sandra Smith)