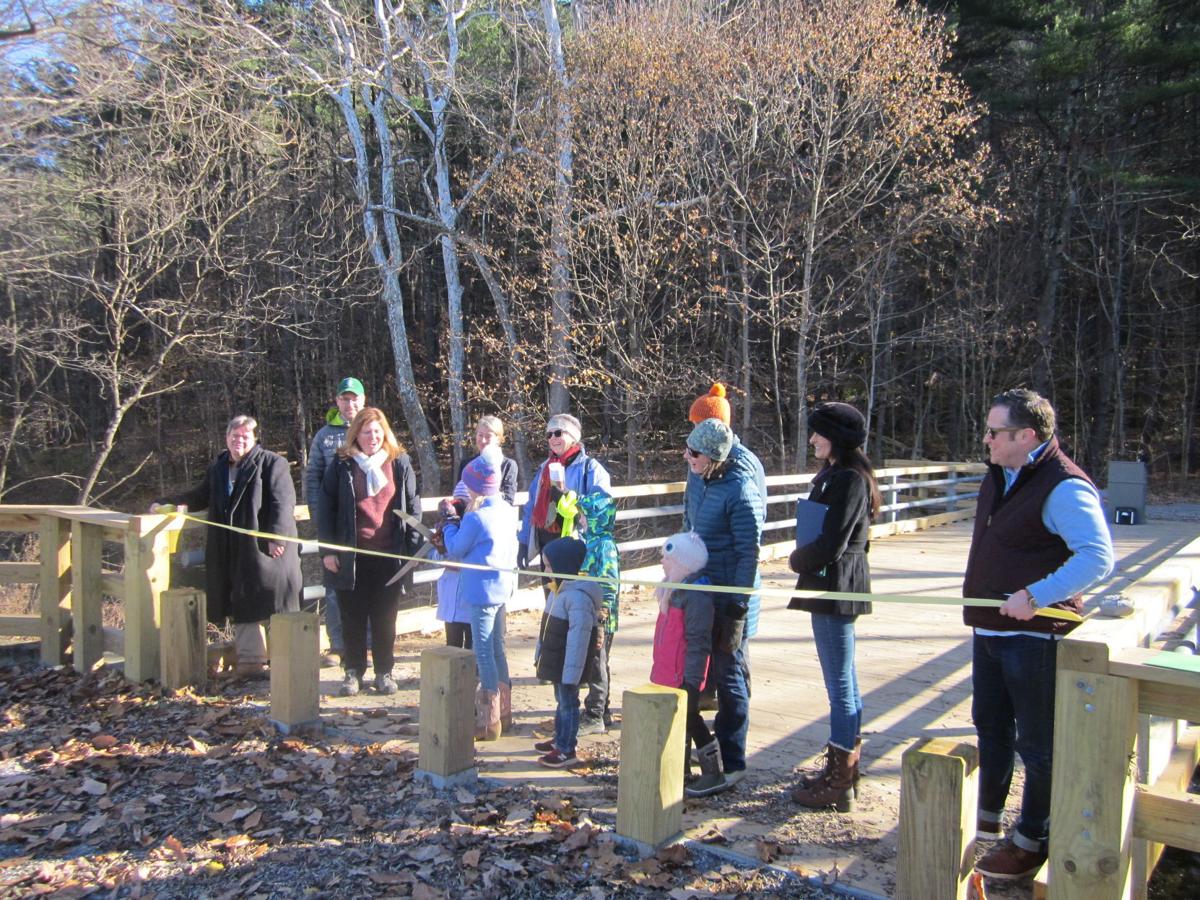 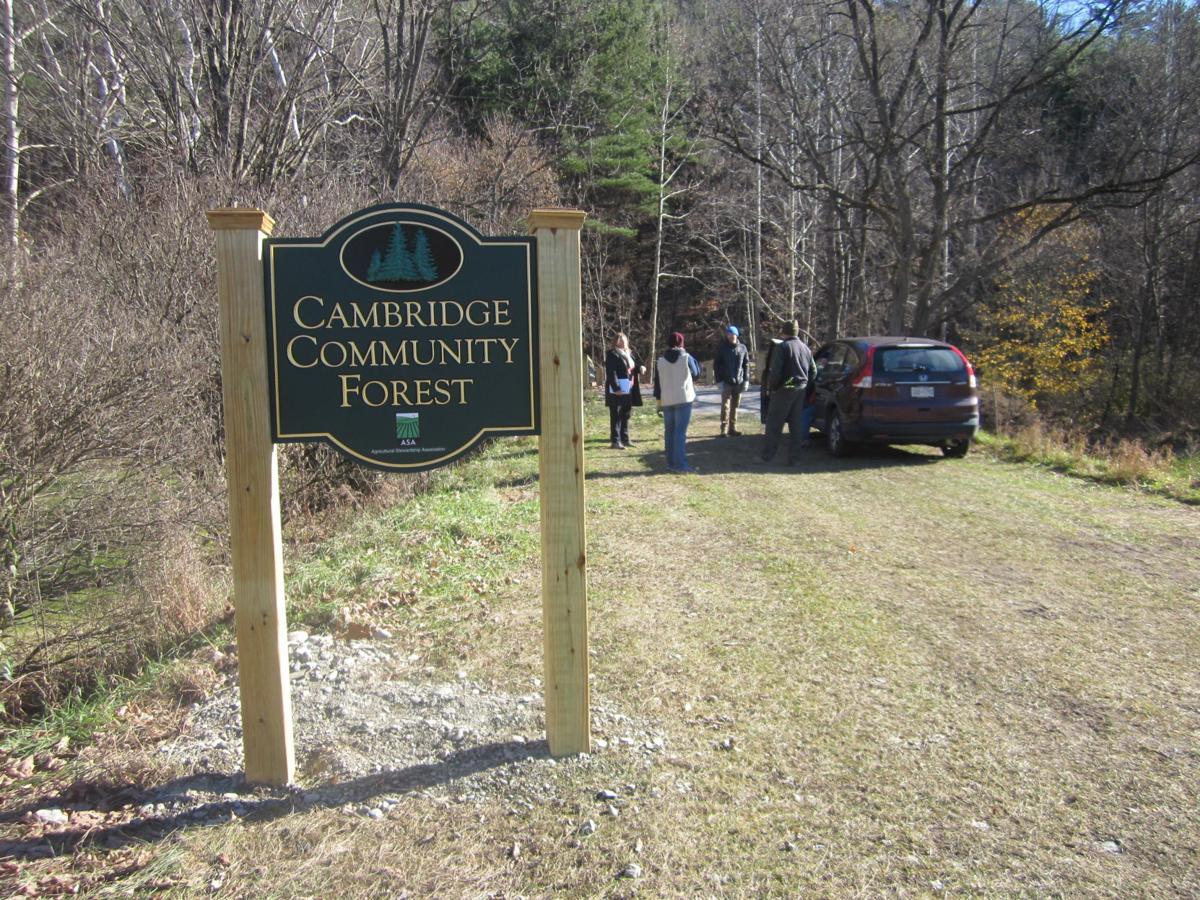 A new sign marks the entrance to the Cambridge Community Forest. 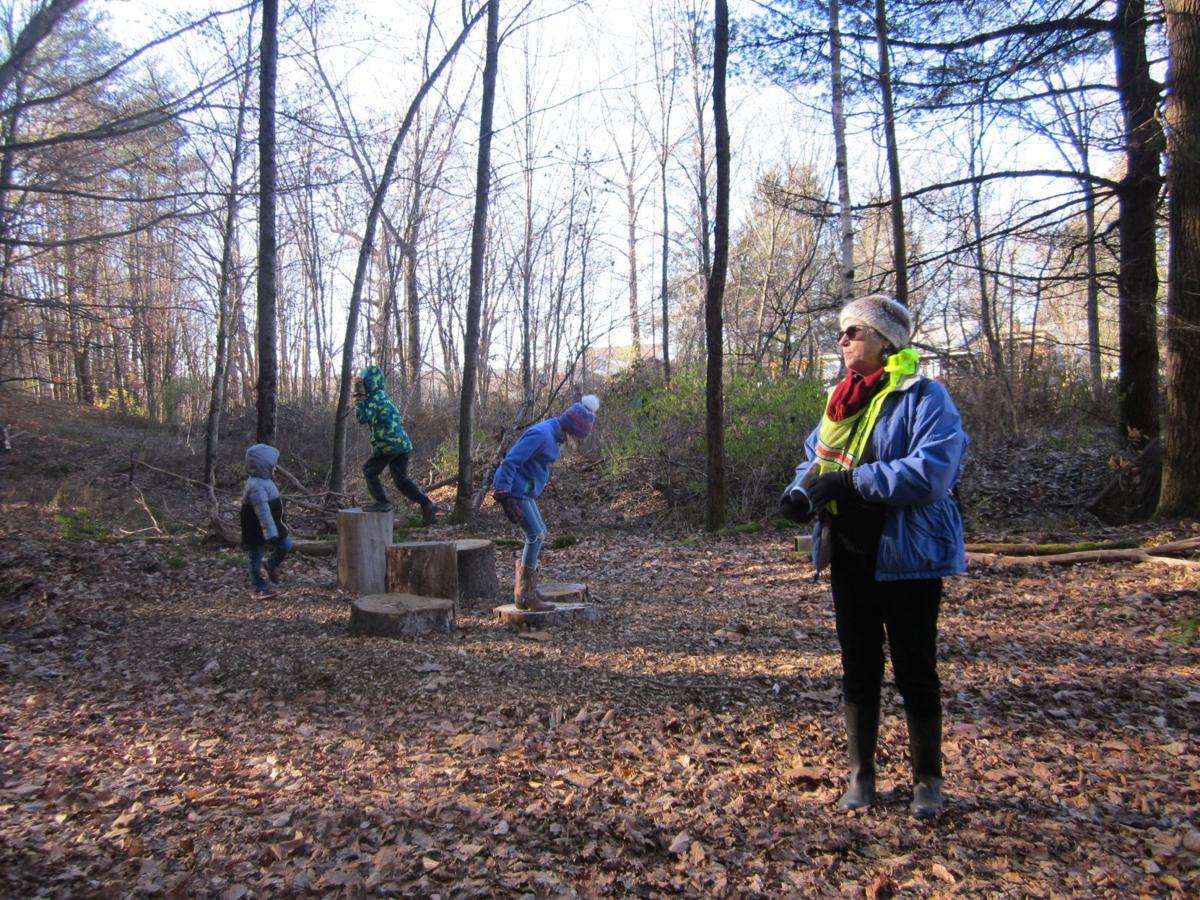 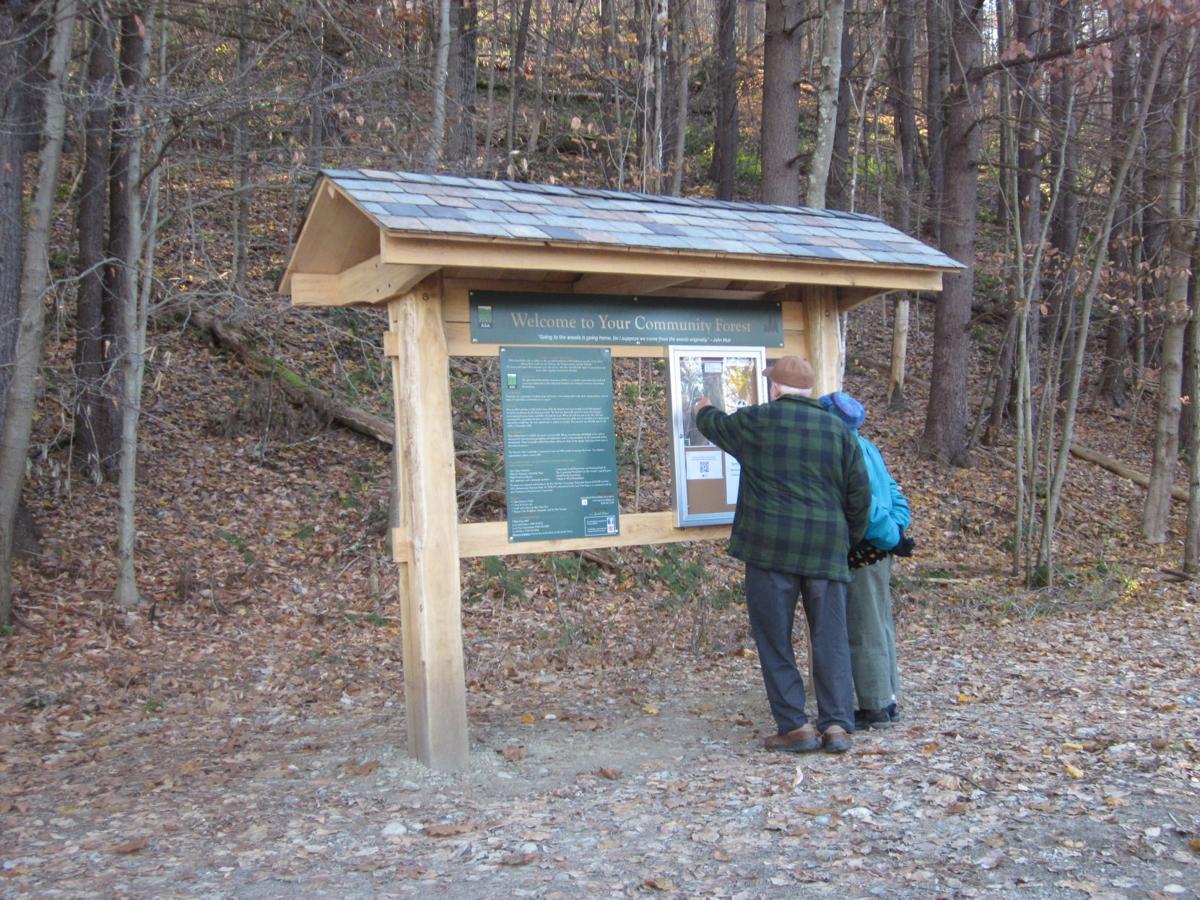 Visitors study the information at the kiosk near the entrance of the Cambridge Community Forest on Wednesday. 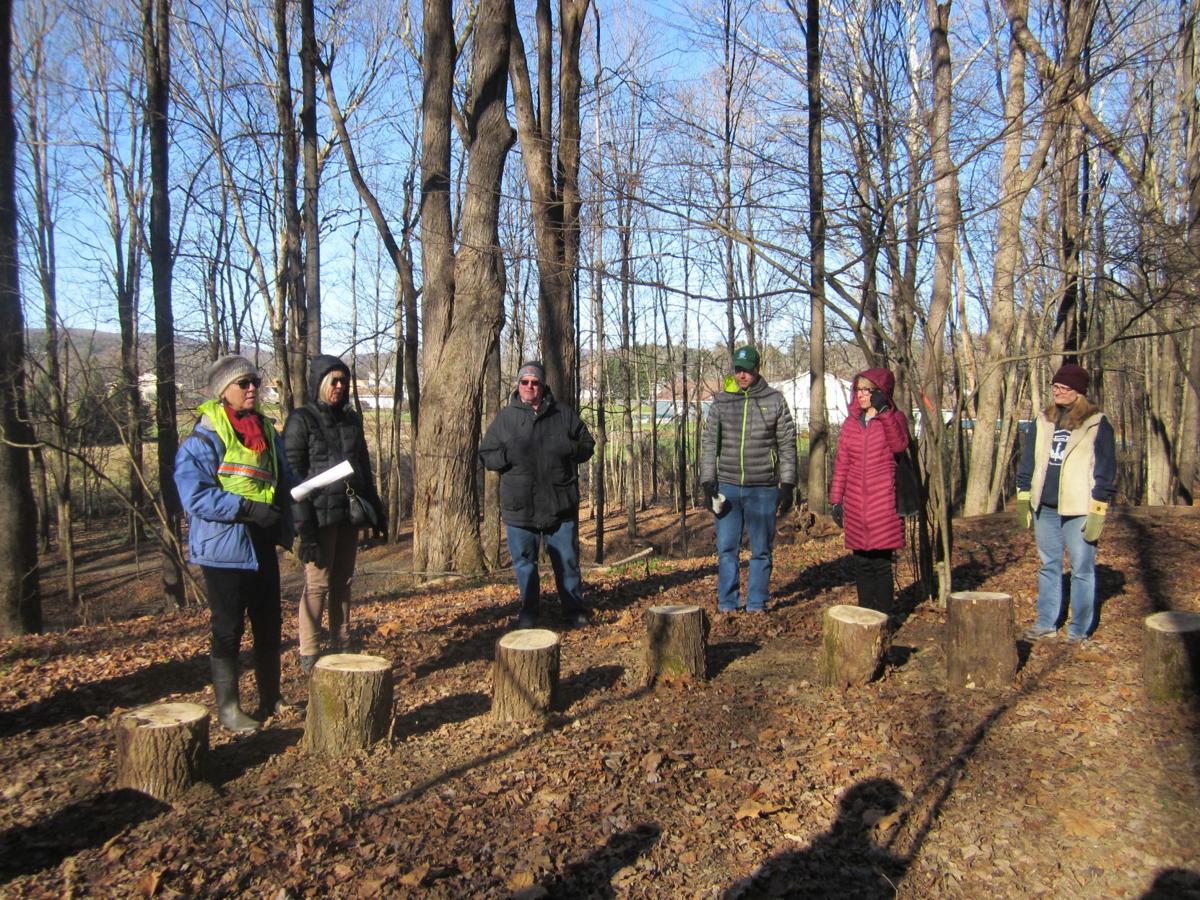 CAMBRIDGE — The Cambridge Community Forest had its official opening Wednesday. About 45 people, from babes in arms to elders, gathered to celebrate on a crisp fall morning.

The forest is a new venture for the Agricultural Stewardship Association, said Tarah Rowse, chair of ASA’s board of directors. Founded in 1990 to conserve farmland, the organization is branching out to forest preservation and community conservation. The Cambridge forest is the first ASA-conserved land open to the public, she said.

ASA purchased the 140 forested acres, on the southeastern edge of the village, in 2019 from the Merriman family, with funding assistance from the Open Space Institute and other donors, said ASA Executive Director Renee Bouplon.

At about the same time, the village of Cambridge received a federal grant to research opportunities to create a recreational economy in the area. Participants in the grant program identified a need for outdoor recreation close to the village.

The land had long been used as an outdoor classroom for science classes at nearby Cambridge Central School.

“It’s critical to get kids to connect to the land early on,” Bouplon said, so they’ll continue to be engaged as adults.

“Village kids are borderline city kids,” said village of Cambridge Mayor Carman Bogle. “Most of the land around us is private.”

The forest will be a recreational and economic resource for the village and surrounding area, she said.

One of the first issues that had to be addressed for public access was the bridge over White Creek that connects the land to Rockside Drive. It was built to carry logging trucks but the wooden deck had rotted.

ASA secured funding from the Alfred Z. Solomon Foundation Charitable Trust to repair the bridge. Peter Demming, an engineer, donated his services to create a plan and oversaw construction of a new heavy-duty deck and guardrails. Other work during the summer and fall included construction of a kiosk just over the bridge and preliminary clearing of trails. Much of the labor was done by volunteers, including students at Cambridge Central School.

After a ceremonial ribbon-cutting at the bridge by Bouplon’s daughter Ellery, Sarah Becker led a small group along a trail in development for children. The trail will feature places to play and to engage children in exploring the woods and stream.

The “sensory trail,” as it’s called, “is sort of an experiment,” Becker said.

Becker, who heads the Friends of Cambridge Community Forest’s education committee, said they’re working out what natural features and artifacts to keep and what to remove, such as metal objects apparently dumped there over the years and downed logs. Special areas will include a seasonal pool where children can learn about biology, writing and drawing supplies to encourage children to observe what’s around them and record it, and a talking circle where groups can sit and have discussions.

The land will be open year-round from dawn to dusk. Parking is at the corner of Gilbert Street and Rockside Drive, with a walk of about two-tenths of a mile to the forest entrance. Visitors are asked to carry out what they carry in, and to leash and clean up after their pets. Boundaries are marked and visitors are asked to respect them.

A new sign marks the entrance to the Cambridge Community Forest.

Visitors study the information at the kiosk near the entrance of the Cambridge Community Forest on Wednesday.