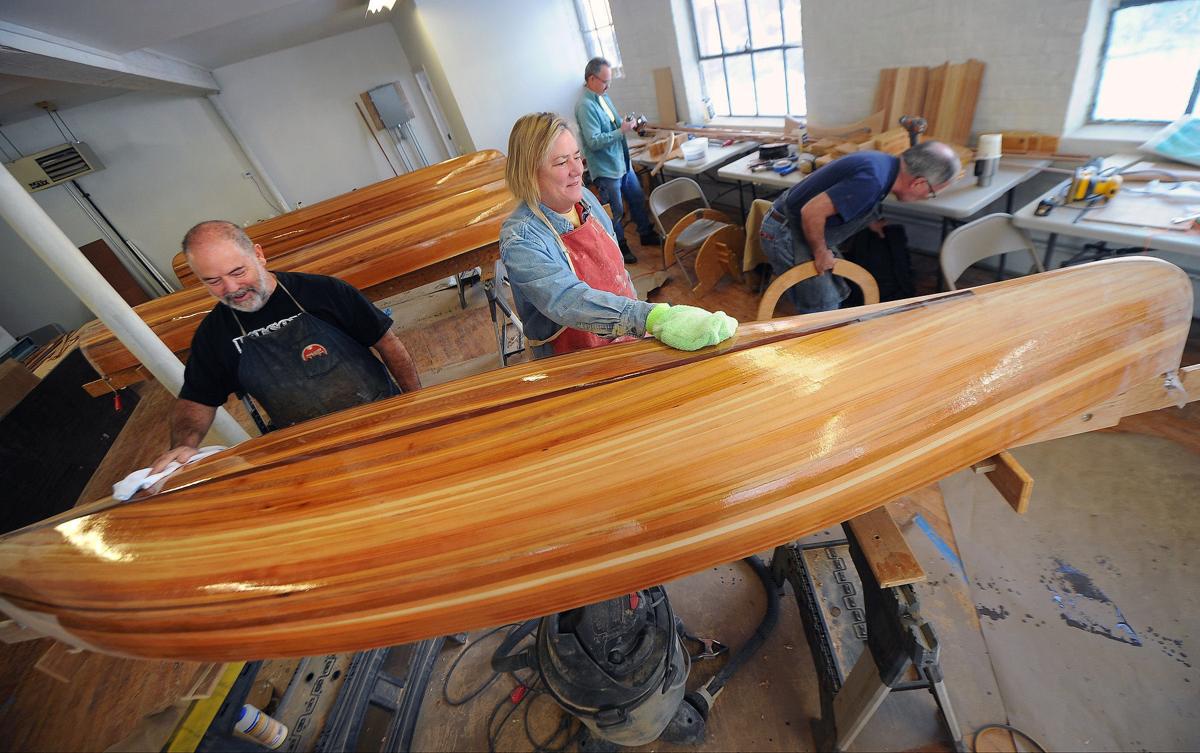 Instructor Larry Benjamin and student Kimm Schlobohm apply a final epoxy coat to the base of a wooden canoe that she has made in the Adirondack Folk School’s 10-day canoe-building class at the Shirt Factory in Glens Falls. 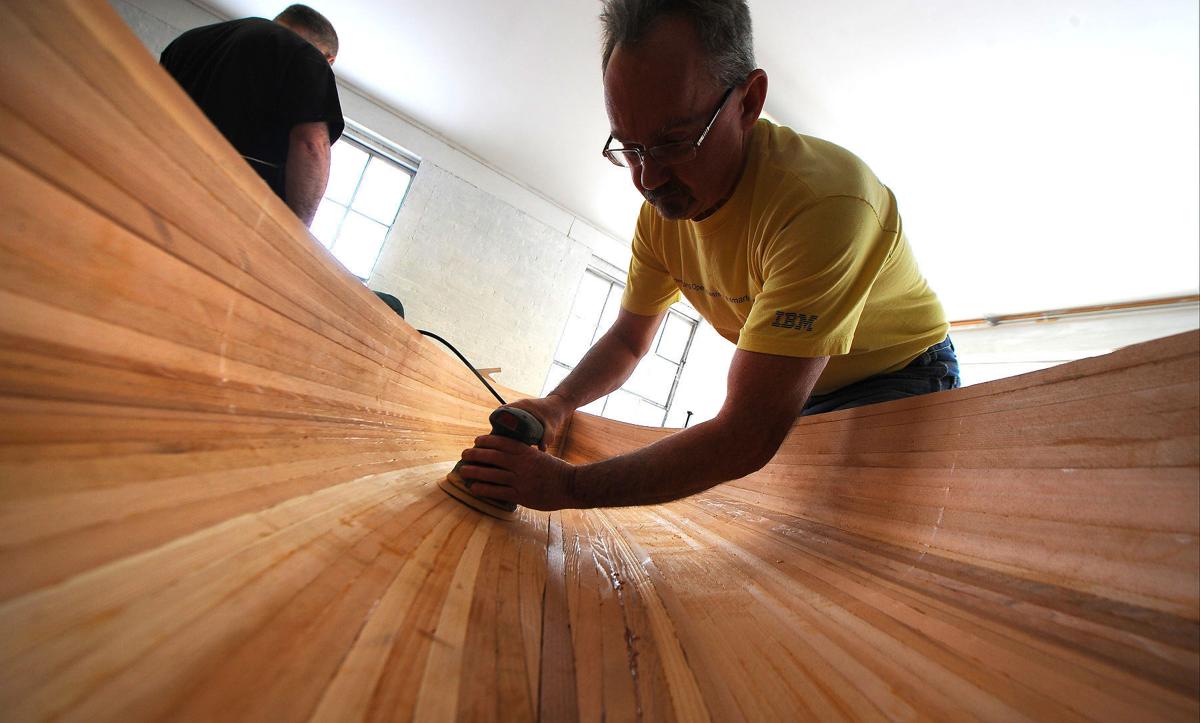 Tom Riley sands the glue down on the inside of the canoe he is making as part of the Adirondack Folk School’s 10-day canoe-building class at the Shirt Factory in Glens Falls. 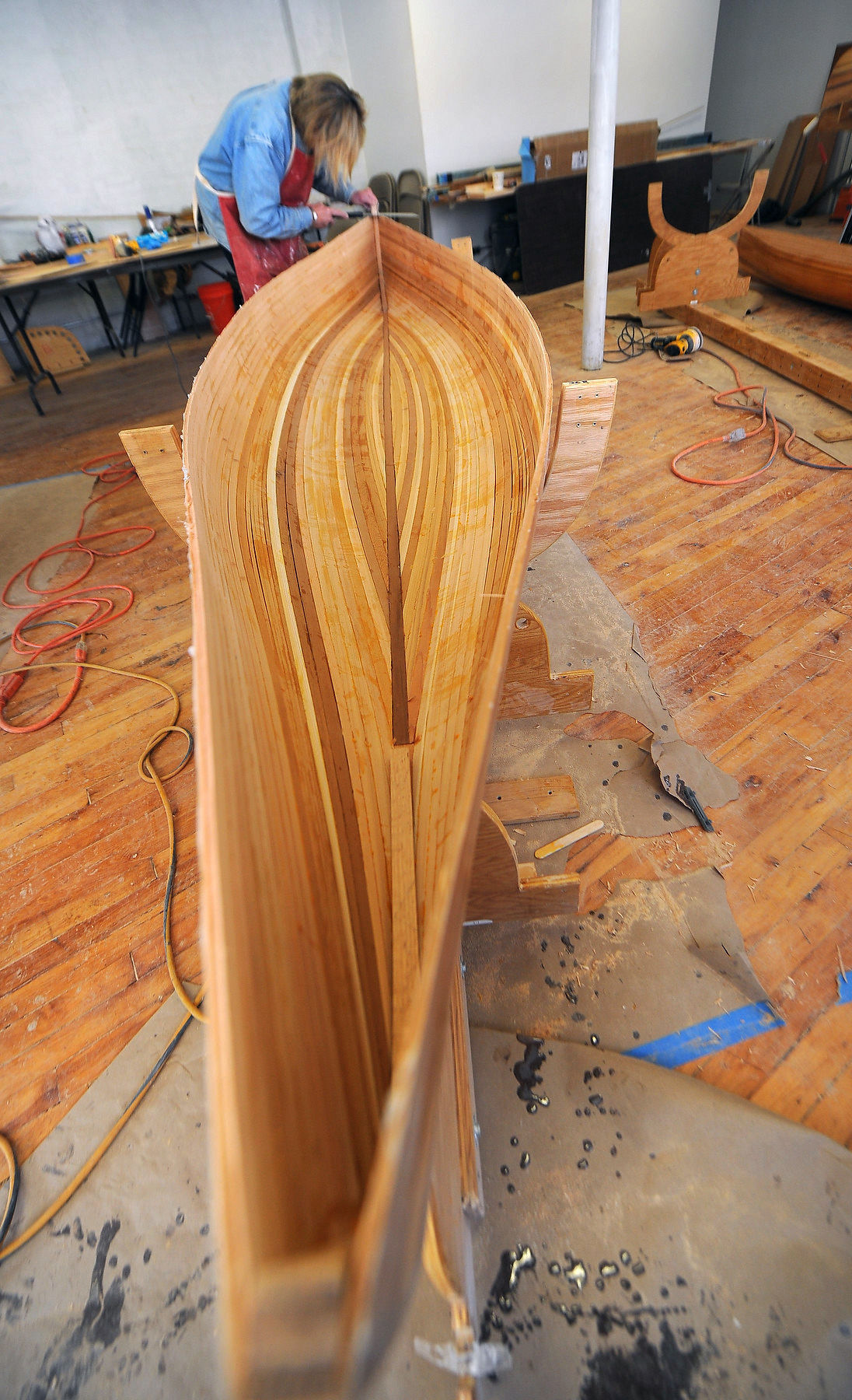 Kimm Schlobohm works Thursday on the canoe she is making in the Adirondack Folk School 10-day canoe-building class at the Shirt Factory in Glens Falls.

GLENS FALLS — There’s something magnificent about a western red cedar strip canoe still wet with the final epoxy coat. Something magical about the way the colors and patterns of the wood deepen in vertical grains, arches and feathers.

And on Wednesday afternoon in a separate building on Curran Lane, behind the Shirt Factory, three 12-foot canoes were popping to life as their creators quickly and gently spread the epoxy hardener on them.

“Pour, pour, pour,” said Benjamin to his three students. “You don’t want to hear a dry roller. See, you can see the weave, try and spread it out as much as possible.”

The three students — one woman and two men — are part of a 10-day canoe-building class offered by the Adirondack Folk School. This December class was the first time students were building canoes inside and not under a tent on the folk school grounds at Lake Luzerne.

“We typically have four canoes under a tent at the folk school; this property is our first foray into a building that is not part of the folk school complex,” said Benjamin, who has been teaching the course for several years.

According to Scott Hayden, executive director of the Adirondack Folk School, Inc., the opportunity to hold a winter class started at a Chamber of Commerce function when he met Shirt Factory owner, Eric Unkauf. Together they saw the benefits of a connection, and that’s how the space became available for the canoe-building class.

Benjamin said offering the class in the winter makes sense, because people who want to make a canoe would rather be paddling when it’s warm.

Take Harold Hagamann of Saratoga Springs. He loves to paddle in the spring, and he’s glad he won’t miss out on those sometimes rough spring waters.

“I always wanted to build this type of boat,” Hagamann said on Wednesday, in between spreading out random epoxy drips on his nearly finished canoe. “It’s been a terrific experience that has far exceeded my expectations. “

He feels building an Adirondack boat is important.

“Building a boat that is culturally indigenous to where we live and play is keeping alive the heritage,” he said.

The canoe the students are creating is modeled after the renowned Wee Lassie canoe, originally built in 1863 by J. Henry Rushton for “Forest and Stream” writer, George Washington Sears, who wrote under the pen name Nessmuck.

Nessmuk was making several canoe trips a day across Adirondack waters and his large canoe was too cumbersome, especially since Sears was such a small man, barely 100 pounds. So Sears asked the Rushton Canoe Company of Canton to create a lightweight canoe for him. The first, at 8 feet long, was too small; the second was the Wee Lassie.

The version of the Wee Lassie students are building is a bit different from Nessmuck’s original that now sits on display in the Adirondack Museum in Blue Lake.

The boats being created at the Shirt Factory workshop have only two screws to hold them together instead of the more familiar rows of nails on most wood strip canoes. And once Nessmuk’s Wee Lassie was completed, it had to soak in water for several weeks before it was ready for use.

The canoes created in the class are wrapped in fiberglass and epoxy to make them watertight right away.

Additionally, Benjamin invented a way to cold bend the wood strips and hold them in place without nails.

It takes about 50 hours for Benjamin to prepare for the canoe class, because he personally mills all the wood strips for student boats, putting a rounded bead on one side of a narrow cedar strip and a grooved cove into another strip. The bead and cove then fit seamlessly together and the frame that Benjamin made holds the strips until the glue dries.

“I built a log house and some sheds,” said student Tom Riley of Pittstown. “But nothing this fine.”

As of late Wednesday, the students still had to add the thwart (crossrail), the bulkheads and the gunwales and add a final urethane finish.

“We’ve only gotten this far because we work together,” student Kimm Schlobohm of Brant Lake said.

Schlobohm said she has built houses and her husband is a finish carpenter, but she has never worked on anything like the canoe: “It’s more fun than I could have ever imagined having in a class.”

As part of the finishing work, Benjamin has the students hide a time capsule in the boat. “These are heirloom canoes,” he said. “We put something meaningful in a small plastic film canister and put it in the bow of the boat.”

He shared how the time capsule came to be.

Sixteen years ago, he was building a canoe with his then 6-year-old daughter, Melanie, and told her to find something special to put in a time capsule for their boat.

On Wednesday, Adirondack Folk School board member Frank Lagace of Lake Luzerne, who made the Wee Lassie in a previous class, was on board to help students with the finishing details.

“It’s a great school. Teaching the dying arts of the Adirondacks brings families together, “ Lagace said.

The next canoe-building class is scheduled for spring 2017. Benjamin said he is looking into a 14-foot version for next year.

Looking back at local history: Dec. 20

Take a look back at local history. Here are the top stories for Dec. 20 from one, five and 10 years ago.

Forged through adversity: Adirondack Folk School educates and impacts others

LAKE LUZERNE — For many weeks in the summer, the town of Lake Luzerne is filled with a steady clinking of hammers on hot iron as blacksmithing…

Instructor Larry Benjamin and student Kimm Schlobohm apply a final epoxy coat to the base of a wooden canoe that she has made in the Adirondack Folk School’s 10-day canoe-building class at the Shirt Factory in Glens Falls.

Tom Riley sands the glue down on the inside of the canoe he is making as part of the Adirondack Folk School’s 10-day canoe-building class at the Shirt Factory in Glens Falls.

Kimm Schlobohm works Thursday on the canoe she is making in the Adirondack Folk School 10-day canoe-building class at the Shirt Factory in Glens Falls.