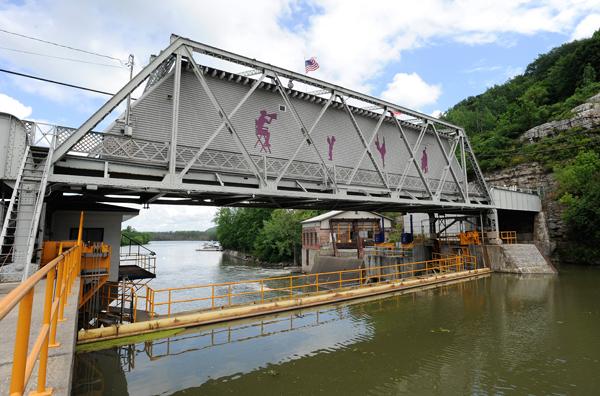 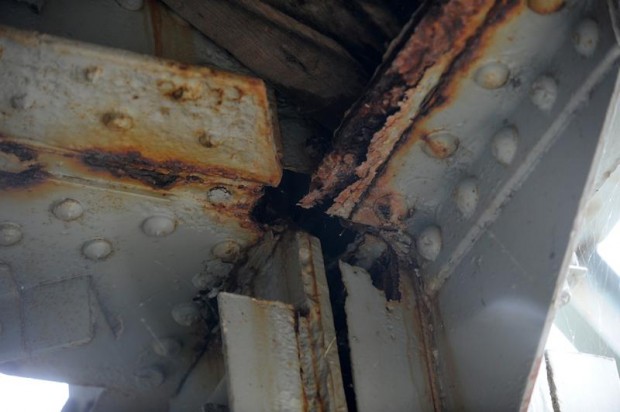 
WHITEHALL u The show will go on - it just won't be on a bridge.

Whitehall's Bridge Theater, a converted traffic span over the Champlain Canal that has been used as a performing arts center since 2000, has been ordered to close by the state Department of Transportation.

State officials are concerned the bridge, built in 1911, cannot support the theater's weight.

"It's unfortunate," said Transportation Department spokesman Peter Van Keuren. "It's a spot you can focus on culture. Hopefully, the theater can move operations nearby. It just can't be on the bridge anymore."

The bridge was closed to vehicle traffic in the late 1990s and converted into a theater by the Whitehall business association.

An inspection of the bridge earlier this year found a truss had deteriorated to the point where it could not support the enclosure built over the 100-foot span, according to state officials.

The theater's managing director, Dave Mohn, along with a group of volunteers, moved many heavy items like air conditioners, amplifiers, stage lighting and seating out of the theater over the July 4 weekend.

"We had nine wonderful years, and we're sorry that we have to leave it," Mohn said. "But safety comes first in our standpoint as well as the state's."

The theater, which was scheduled to have its opening night on Friday, will start its season on July 17 at its new location at 3 Main St. in the village, also known as the Cooke's Island Recreation/Arts Center, Mohn said.

The first show, a cabaret called "Torches and Jazz," is scheduled for 7:30 p.m. that night. The season runs until the end of August, Mohn said. Over its nine-year run, hundreds of shows and performances by community groups were staged in the Bridge Theater.

When the 60-seat theater was first constructed on the bridge in 1999, state officials told Mohn the bridge would not support the structure forever.

"It was in our long-range plans that we would move everything down to our arts center," Mohn said. "We realized that would happen, but hey - nine, 10 years - we'll take that."

The theater was built on the converted bridge with the aid of a $17,500 state grant for equipment, as well as a $22,000 donation from the Troy Savings Bank. The state DOT agreed to paint the structure, at a cost of $1.5 million, five years ahead of schedule, according to the theater's Web site.

"It's too bad because I know Dave poured his heart and soul into that building," Putorti said. "They'll regroup and survive."

Van Keuren, the DOT spokesman, said it hasn't been decided when or if the bridge will be removed.

"The decision as to whether we are going to formally take it down or if it will be blocked off hasn't been made yet," he said. "Probably sometime in the near future we'll decide if we take it down."

A Chester resident has turned in the rifle belong to state police that the agency has been trying to find.

Six more Warren County residents have caught coronavirus due to unsafe practices at work, Warren County Health Services said. That brings the two-day total of people who got sick at work to 11, out of 28 people infected.

A Hudson Falls man has been arrested after police said he robbed the Courtyard Marriott in Lake George.

Four members of the Amish community were transported to Glens Falls Hospital after their horse and buggies were struck by an SUV.

Police have released the names of the drivers involved in a Hampton crash that injured three members of the Amish community.

More than 20 officers belonging to the Glens Falls Police Department have faced some type of disciplinary action in the past five years for a wide range of offenses, according nearly 600 pages of police records obtained by The Post-Star.

A Whitehall man was seriously injured on Thursday afternoon after he lost control of his ATV and it fell on top of him, according to police.