A rendering of a new building to store boats for Shoreline Boat Sales and Service in the village of Lake George is seen. The Planning Board on Wednesday approved the project for a second time after a judge sent the project back to the board. 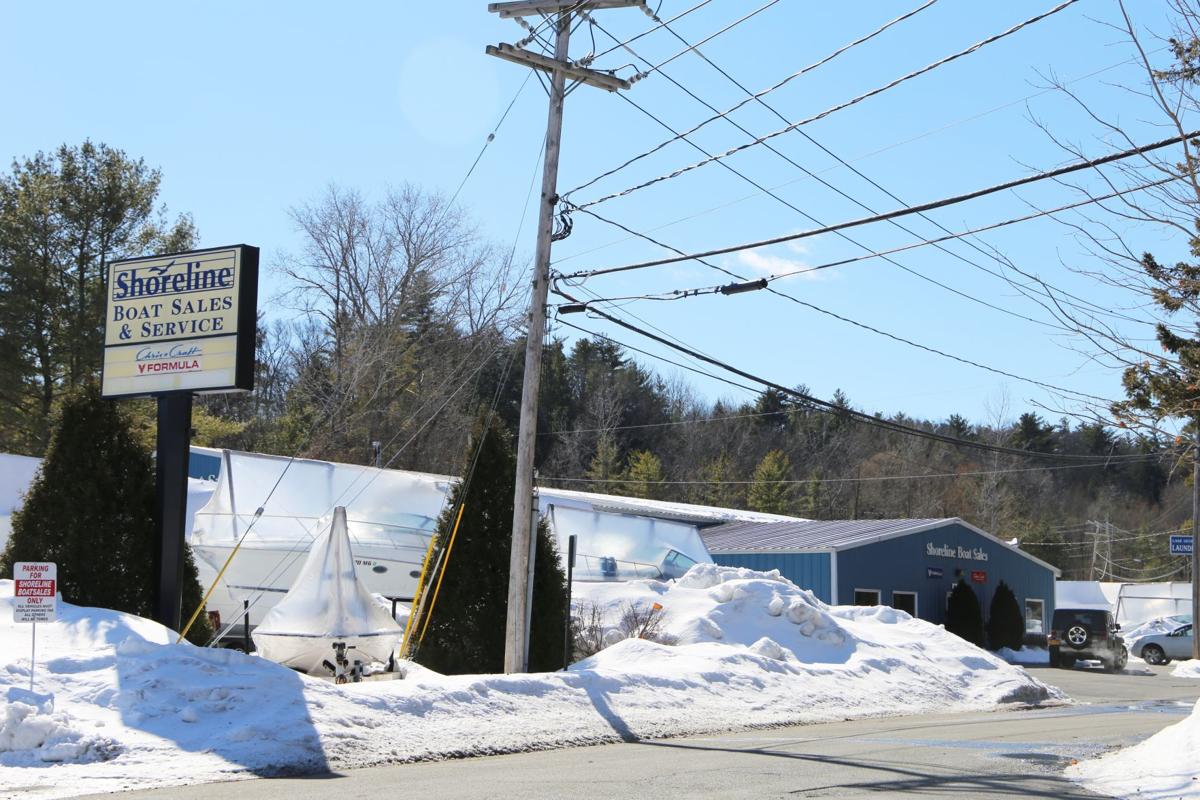 Shoreline Boat Sales and Service in the village of Lake George is seen in this file photo.

LAKE GEORGE — A proposal by a Lake George businessman to build an indoor boat storage building received Planning Board approval for a second time on Wednesday, after a judge ordered that the matter be reviewed again.

Quirk currently stores boats outside on the property, and the new building would allow him to increase the number of vessels stored on the site from 200 to 246, with 146 stored outside and 100 inside.

The Zoning Board of Appeals in April 2018 granted variances to allow the building to be closer to the property line and to have metal siding. The following month, Adirondack Pub & Brewery owner John Carr filed a lawsuit seeking to overturn the decision on the grounds that, under village code, area variances must be referred to the Planning Board for its review and recommendation.

Carr withdrew the lawsuit with the stipulation that the matter go back for board review. The Planning Board approved the project in January of this year and Carr filed another lawsuit in February.

In a decision dated May 29, Judge Robert Muller ruled that the Planning Board had erred by issuing its opinion that the project would not have a negative impact on the environment for both the boat storage project and the plans Quirk has for the neighboring parcel, where he owns a laundry facility. Muller said the board should have made separate determinations on each aspect of the project.

The judge dismissed another claim, in which Quirk’s attorney alleged that the Planning Board did not have the authority to grant waivers from the state’s architectural standards and it should have gone before the Zoning Board.

“It is a proper exercise of the Village Board’s discretion to provide applicants with two avenues in which to address their failure to comply with the dimensional and physical requirements in the Architectural Guidelines,” Muller wrote.

Muller sent the case back to the Planning Board, which on June 26 again granted approval with no changes or issues, according to Village Attorney Matt Fuller.

Fuller said that the judge ruled that there was insufficient information to make a determination on the whole project. Quirk filed that additional information and the board was able to conduct the review.

Carr’s attorney, Claudia Braymer, said she believes it would be disappointing for the village to just re-approve the application.

“Now, there’s going to be a giant monolithic boat storage building right in the village, a block from Canada Street,” she said.

Carr said he is still weighing his options about whether to appeal further. He believes that the Village Board and Mayor Robert Blais went to “exceptional lengths” by changing the local law last summer to make it easier for the Planning Board to waive architectural requirements.

“We feel that those changes are specific to this one project and they’ve really bent over backward to do it,” he said.

Carr said he is not opposed to Quirk expanding his business, but believes the look of the building is not appropriate for the area.

“Blue steel siding on a massive warehouse is fine at the airport. It’s fine in an industrial park, but not in downtown Lake George village — one of the most beautiful areas of the world,” he said.

LAKE GEORGE — Shoreline Boat Sales and Service is on track to get the new storage facility it has been trying to get approved since 2017, desp…

A rendering of a new building to store boats for Shoreline Boat Sales and Service in the village of Lake George is seen. The Planning Board on Wednesday approved the project for a second time after a judge sent the project back to the board.

Shoreline Boat Sales and Service in the village of Lake George is seen in this file photo.