Please subscribe to keep reading. You can cancel at any time.
Already a subscriber?
Log in or Activate your account.
Loading&hellp
No thanks, return to homepage.
{{featured_button_text}}
1 of 5 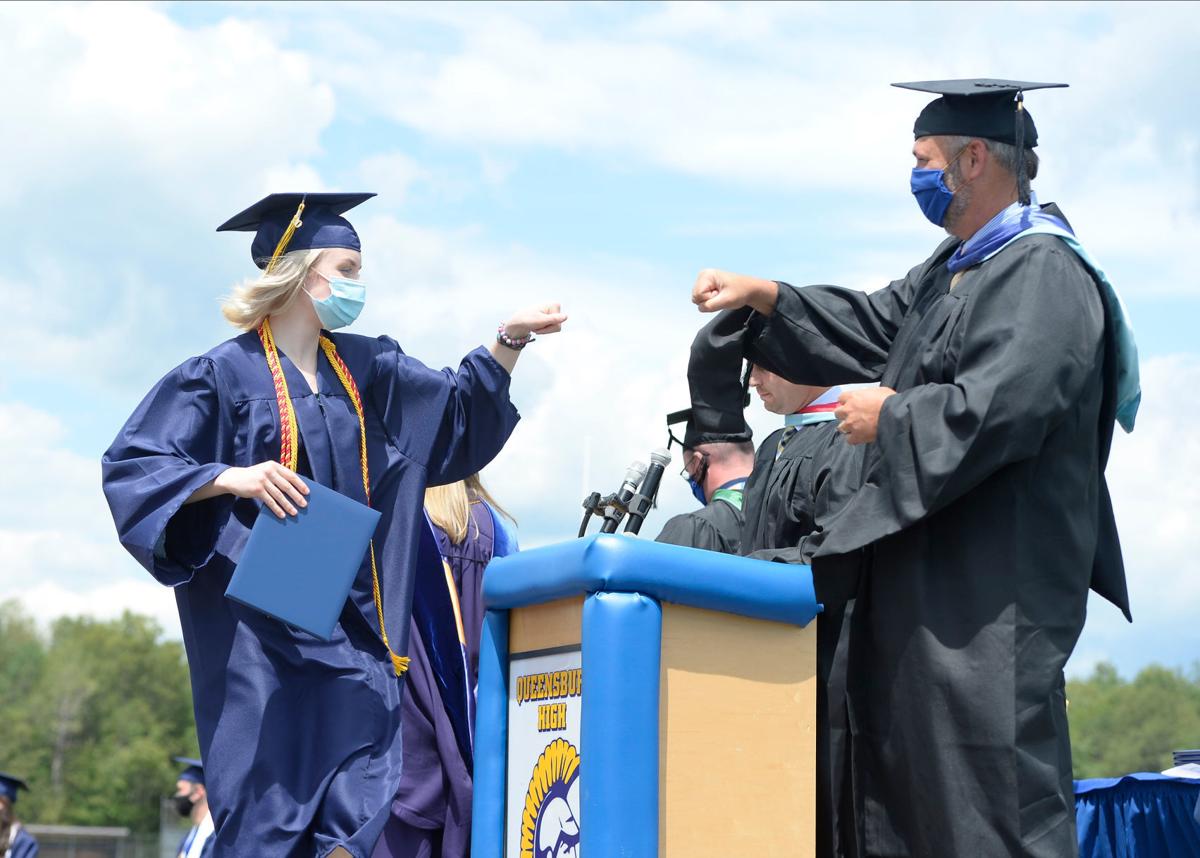 A member of the Class of 2020 air-fist bumps Principal Damian Switzer at graduation on the football field of Queensbury High School on Friday. 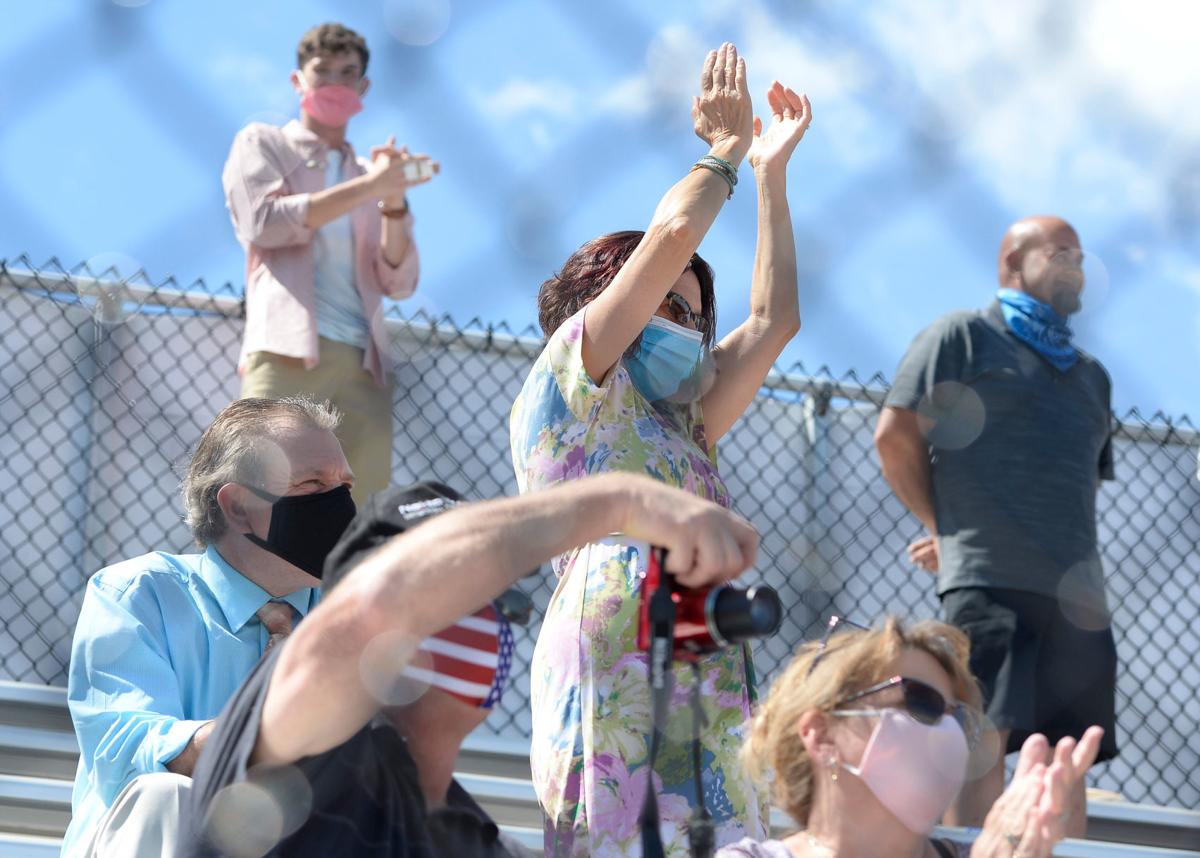 Spectators clap as a section of the Class of 2020 walks to their seats for their graduation ceremony on the football field of Queensbury High School on Friday. 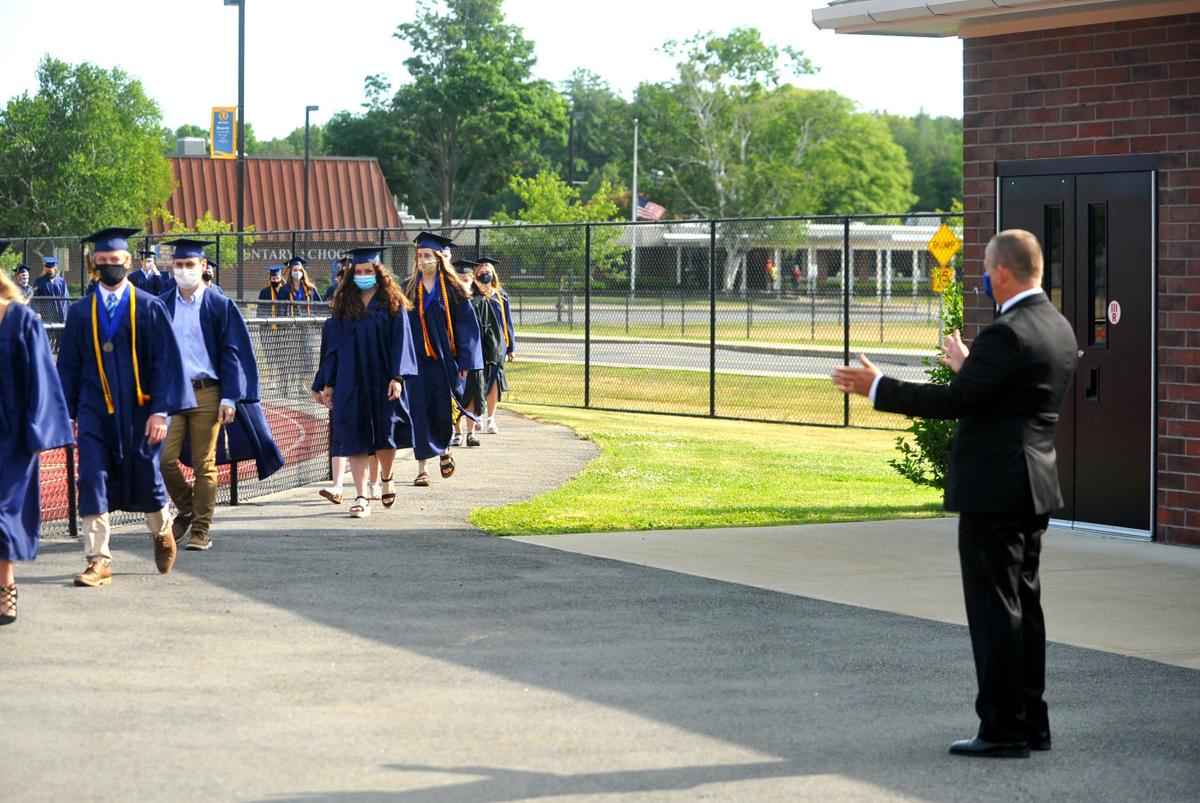 Queensbury schools security monitor Robert Maynard gestures to the Class of 2020 to keep them 6 feet apart as they walk to their seats for graduation Friday morning. 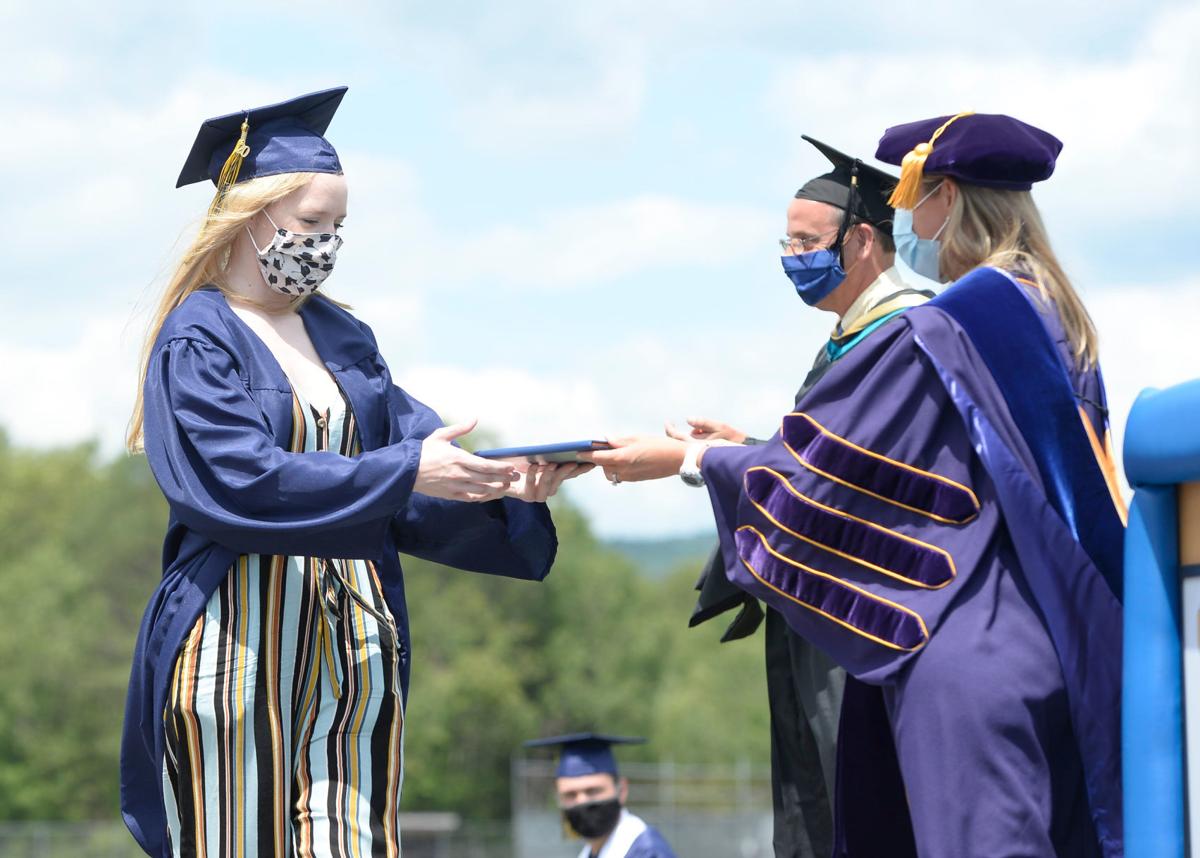 A member of the Class of 2020 receives her diploma at graduation on the football field of Queensbury High School on Friday.

Queensbury students line up at 6-foot intervals as they await the start of their graduation ceremony on Friday morning.

QUEENSBURY — Queensbury Superintendent Kyle Gannon was determined to graduate every single senior in person this year.

And so he held not one, not two, but eight ceremonies to watch all 293 students get their diplomas. They were organized into groups of about 35 and spread across the track by the football field, each with a couple of family members watching from the football stands.

The band played and the school chorus sang — in a recording made before social distancing put a temporary end to such performances.

The speakers, including two seniors, gave their speeches four times Friday and were planning to carry on with four more speeches Saturday.

“It definitely takes the pressure off the first one,” said Sophia Afsar-Keshmiri, one of the two class speakers. She was hoping her delivery would get better as the hours wore on.

Gannon had no complaints about the idea of eight hourlong ceremonies in the hot sun over the course of two days.

“We are just super happy to do this,” he said. “They’re my kids. You do anything for your kids, to show you love them. They deserve this.”

Even students unlucky enough to draw the early-morning slot, which had them lining up along the track just after 8 a.m., were glad to be there.

“I’m glad that we got to do it in person,” said Anneke Troelstra, adding that she was awake anyway. “My friends wanted to take sunrise graduation photos. I was up at 4 a.m. I do regret that.”

Some districts chose to do a drive-in movie theater ceremony for the entire class at once, but Troelstra said she preferred the traditional ceremony, even though she could only match with a few of her classmates.

“I’m with my peers and I can actually have a conversation with them instead of being in our cars,” she said.

The speeches offered the traditional phrases about perseverance and pride in the accomplishments of the graduating class, but it took on a new meaning during the pandemic.

When high school Principal Damian Switzer said he was “so happy” to be at the graduation, he wasn’t just being descriptive. There was a good chance, for months, that the ceremony would have to be canceled.

“After so many scenarios and back-to-the-drawing-board moments, I’m so happy to be here,” he said. “I am so happy we are gathered here together, on our scenic campus, surrounded by friends and family.”

And he wasn’t just proud of them for finishing school, but for transcending a global pandemic to keep on studying.

“There would be no pandemic strong enough to silence you,” he said.

Gannon reflected on the fact that the Class of 2020 started kindergarten when he became a principal.

“I had relished the day I became superintendent because I would be able to give the graduation speech to your class,” he said.

The pandemic ruined many plans for the end of the school year.

“Over the last few months I’ve been angry about what your class missed,” he said. “But when I really dug into 13 years, I realized all we had.”

The two student speakers said the pandemic gave them a wiser perspective on life.

Afsar-Keshmiri started her speech by explaining that she prefers stories that have a happy ending. But after the last three months, she said, she’s learned to love bittersweet endings.

“I just couldn’t believe we weren’t going to get the ‘happily ever after’ we were all expecting,” she said.

When she picked up her cap and gown and was greeted by cheering teachers, she changed her mind.

“I stopped feeling bad for characters with bittersweet endings. Experiencing my own, I realized they were the best,” she said.

Student speaker Robert Scheidegger asked the class if it was Opposite Day.

No hugs between celebratory friends. No handshakes with teachers.

“It feels more like Opposite Year,” he said. “And just when we thought we were going to take off on our own.”

But he urged his fellow graduates to use the “unique and lasting resilience” they learned during the pandemic to make themselves better.

He noted that when tectonic plates collide, gold is deposited in veins near the surface.

Parents said they were amazed that school officials were willing to hold eight ceremonies just to make sure every student got an in-person graduation.

“We really appreciate all the hard work that (Superintendent) Kyle Gannon put into this,” said Paula Berube, whose son Alexander graduated in the first session Friday. “We’re thrilled to be able to share this milestone with our son.”

Parent Terry Murphy said he’d wanted a ceremony, and not just as a parent.

“I wanted to see it, but I saw how much it meant to her and her whole class,” he said of his daughter Audrey. “It was good to have something.”

Kirk Huffaker, father of graduate Jack, said he felt frustrated because the limits on graduations didn’t seem to be reasonable.

“This is the very population that is not affected (by coronavirus). The kids seem to be getting the shaft,” he said.

So he was pleased by the district’s decision to find a way to work within the rules.

“They didn’t have to do this. They could have just done something online, ‘Here you go,’” he said.

Instead, his wife Bonnie noted, the district painted a Q in the center of the football field, put up a congratulations sign on the scoreboard and piped in recorded music from the student players who were not allowed to perform in person.

“I was actually overcome, a little bit,” she said. “All the support, the sacrifice to do this eight times — just a lot of love here.”

Congratulations to the Class of 2020! To see a gallery of images from area high school commencement ceremonies across the region. Go to poststar.com.

Congratulations to the Class of 2020! Here's our look at high school commencement ceremonies across the region.

Local school districts are putting together outdoor graduation ceremonies now that the governor has allowed them.

With restrictions on public gatherings by the COVID-19 pandemic, school districts are getting creative to find a way to honor graduating seniors.

GLENS FALLS — The advice to the Queensbury High School Class of 2019 was about building relationships and serving others.

A member of the Class of 2020 air-fist bumps Principal Damian Switzer at graduation on the football field of Queensbury High School on Friday.

Spectators clap as a section of the Class of 2020 walks to their seats for their graduation ceremony on the football field of Queensbury High School on Friday.

Queensbury schools security monitor Robert Maynard gestures to the Class of 2020 to keep them 6 feet apart as they walk to their seats for graduation Friday morning.

A member of the Class of 2020 receives her diploma at graduation on the football field of Queensbury High School on Friday.

Queensbury students line up at 6-foot intervals as they await the start of their graduation ceremony on Friday morning.