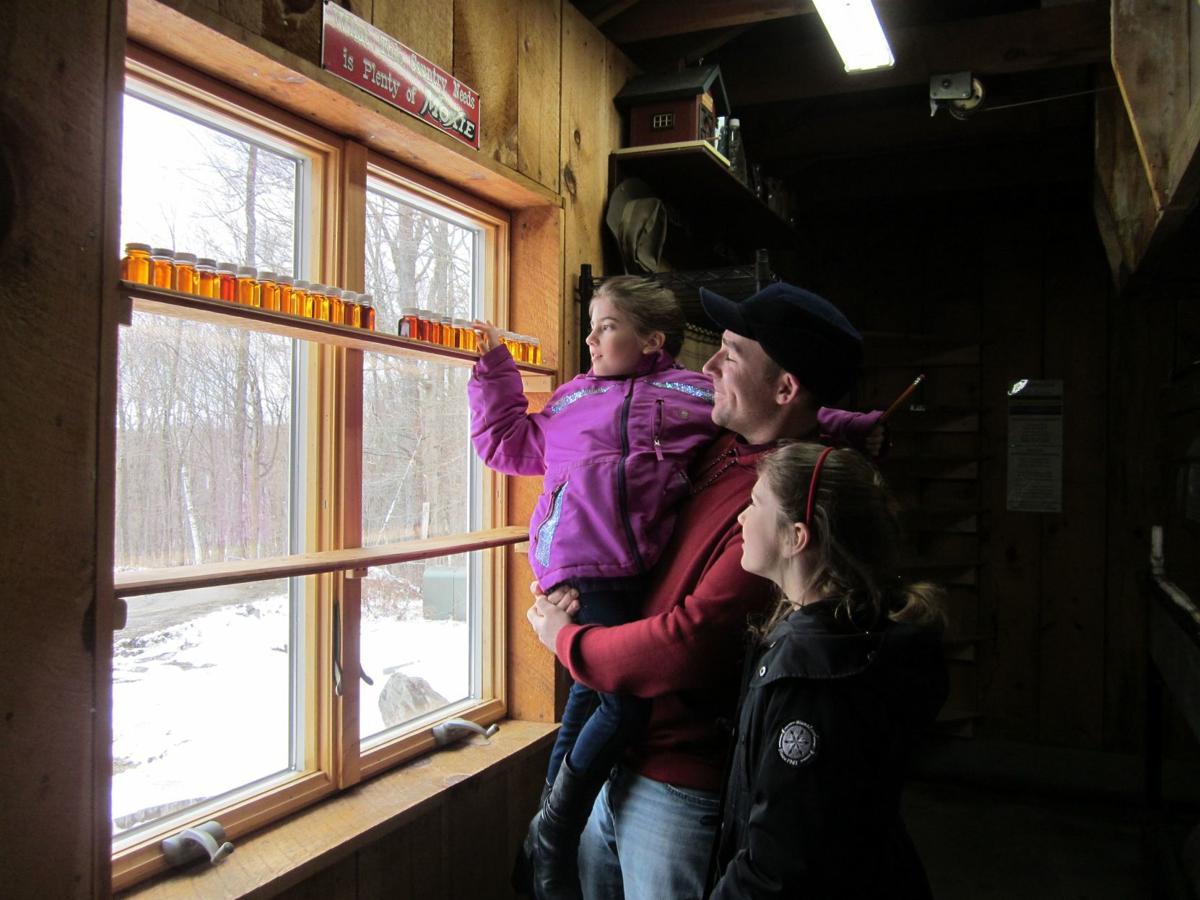 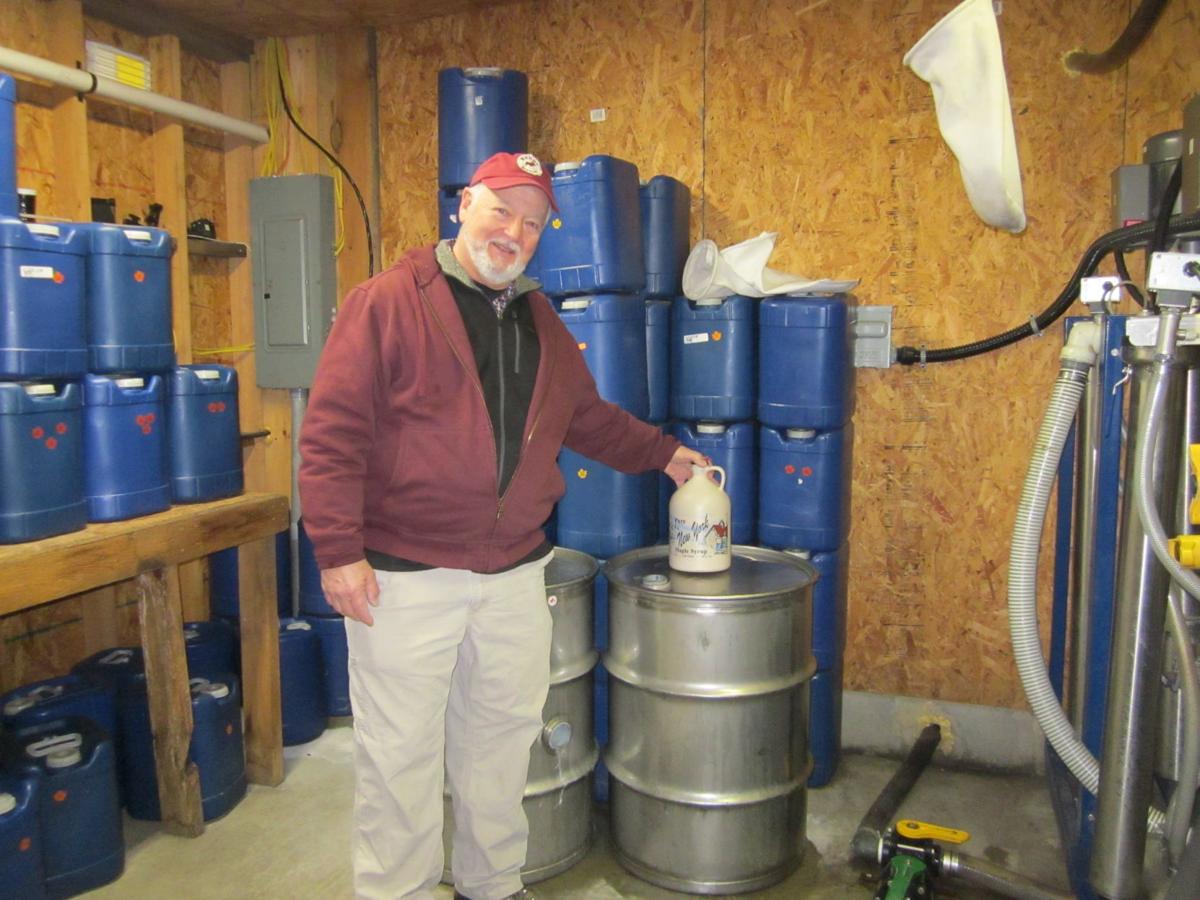 Dave Roberson, a helper at Wild Hill Maple in Jackson, explains during Saturday's Maple Open House Weekend that making a 1-gallon jug of syrup requires enough maple sap to fill the steel drum beneath it. 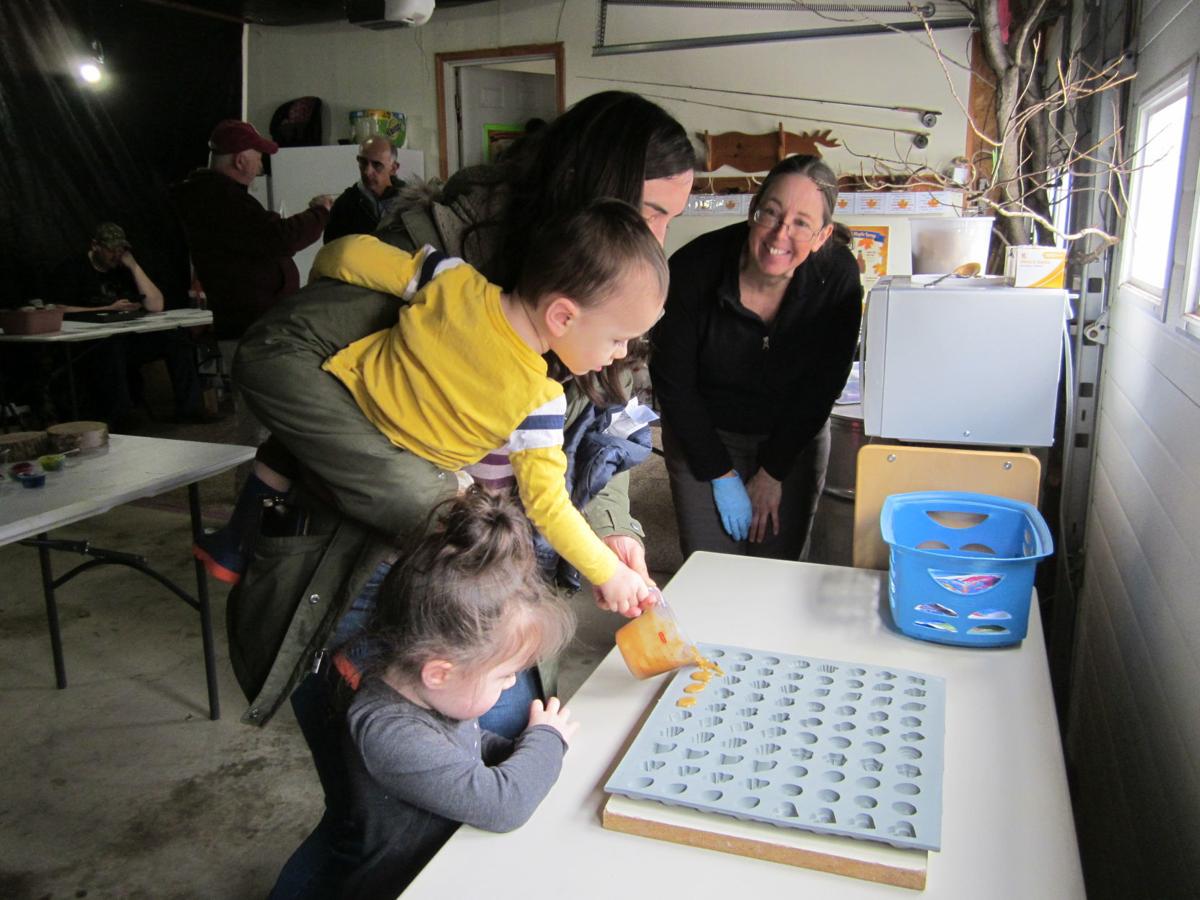 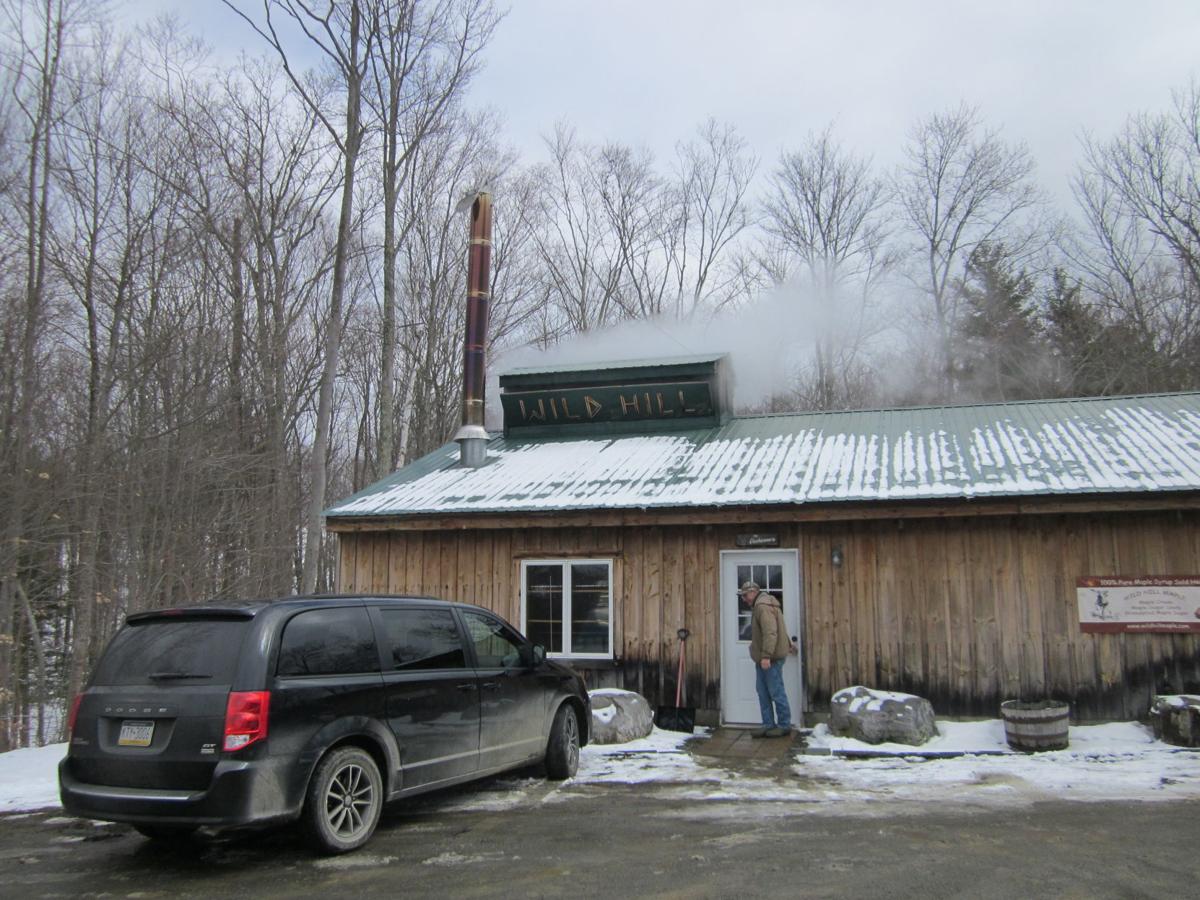 Wild Hill Maple, in the town of Jackson, was open for visitors during Saturday's Maple Open House Weekend. 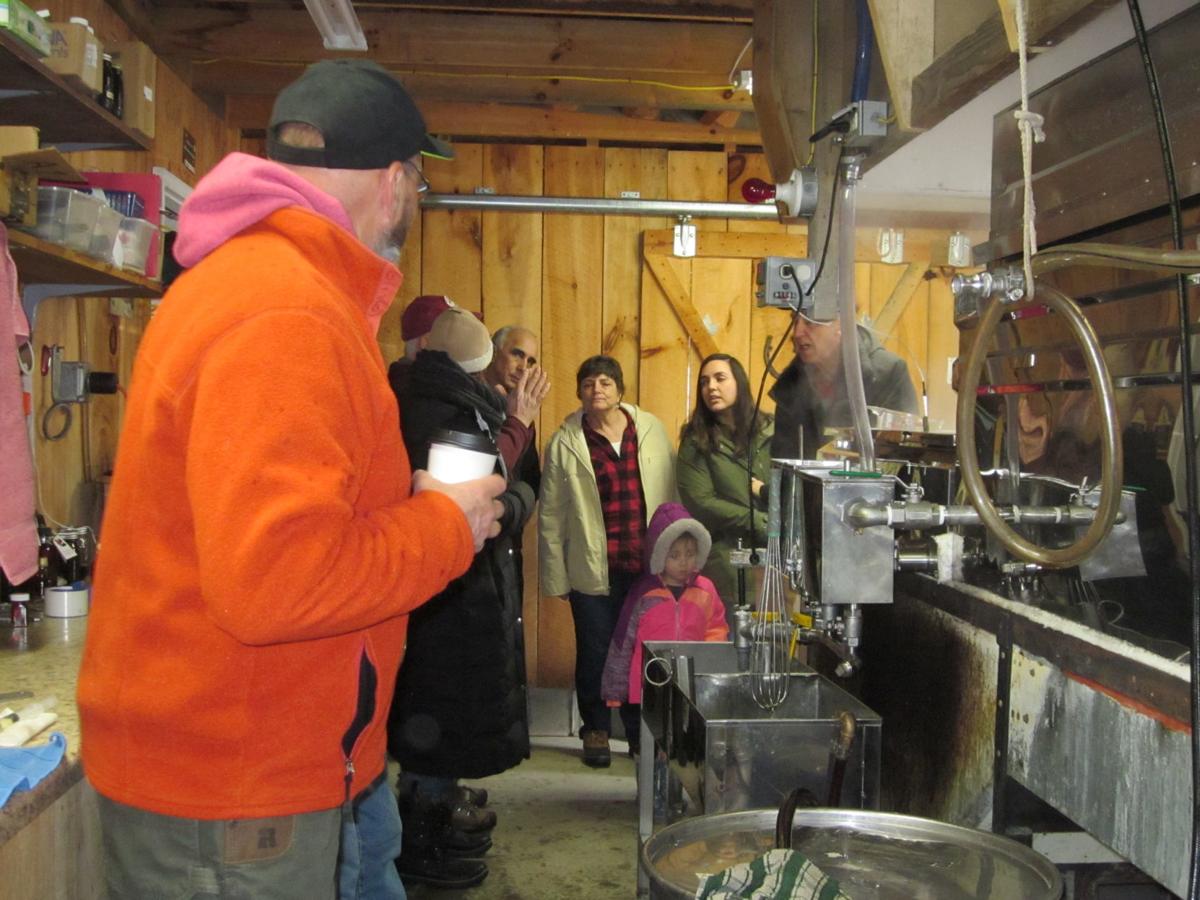 JACKSON — There’s a reason Brian Ducharme and Julie Ryan call their maple products business Wild Hill Maple. It’s a long drive down a dirt road through snowy woods, but if the sign at the driveway isn’t enough, the steam rising from the sugar house ventilator confirms to a visitor that this is indeed the place.

Unlike some recent years, when participants in the annual Maple Open House Weekends were almost done boiling by the first weekend, the sap this year started running late, Ducharme said. “Usually I’d have three-quarters of my crop,” he said. “Now I have one-third. The season could go into April or warm right up,” which ends the useful sap flow. Because of deep cold with no snow earlier in the winter, the tree roots froze and couldn’t draw sap right away when milder weather arrived.

“The roots thawed out the last few days and we got a phenomenal amount of sap,” Ducharme said. Not only do the sugar makers have to scramble, “it’s testing your equipment to the max.”

Helper Dave Roberson was giving tours of the Wild Hill operation. Sap comes downhill through tubing to the sugar house, where equipment maintains a steady vacuum on the line. Sugar content of the sap this season has been running at 1.7 percent, he said. Syrup has a concentration of 66 percent, meaning that a lot of water has to be removed.

Ducharme runs the fresh sap twice through a reverse osmosis machine, raising the sugar concentration to 15 percent. “That cuts down your boil time,” which also saves fuel, Roberson said. Wild Hill saves more time and labor by firing the evaporator with fuel oil instead of the traditional wood.

Ducharme and Ryan started the business in 2002, mostly selling bulk syrup on the wholesale market. The wholesale price of syrup can be volatile, so they branched out into maple candy, cream, and sugar for retail sale. Although it’s the hardest to make, “candy is probably one of our biggest sellers,” Ducharme said. “We’re having a blast making it and it’s all working really well.” Their marketing efforts found a niche in small-sized treats that can be used as wedding and party favors, he said. Because of marketing regulations, all their products consist solely of maple—no coated nuts or other mixtures, Ducharme said.

Ducharme credited David Campbell at Mapleland Farm in Salem, a fellow member of the Upper Hudson Maple Producers Association, with teaching him how to make maple candy. Maple sugar makers “are the nicest bunch of guys you’ll ever want to meet,” Ducharme said. “They’re not in competition. Everyone helps everyone else.”

Along with tours and samples and sales of maple syrup and products, Wild Hill has a variety of kid’s activities, including a maple scavenger hunt, making maple sugar candy, pictures to paint, matching tree slices and animal tracks with the right name, and a raffle. Other participants on the tour are offering pancake breakfasts and horse-drawn wagon rides.

The Maple Open House Weekend continues from 10 a.m. to 4 p.m. today and next Saturday and Sunday at 29 participating sugar houses throughout the region. The self-guided tour is free. For more information, visit www.upperhudsonmaple.com/maple-syrup-events/. Dress appropriately for mud, wet, and chilly weather. Sugar houses are often far from main roads. A good map or GPS will help visitors find their destination.

A Queensbury man was arrested Saturday for allegedly assaulting a man with a knife.

Dave Roberson, a helper at Wild Hill Maple in Jackson, explains during Saturday's Maple Open House Weekend that making a 1-gallon jug of syrup requires enough maple sap to fill the steel drum beneath it.

Wild Hill Maple, in the town of Jackson, was open for visitors during Saturday's Maple Open House Weekend.