Behind the scenes, Jaliek investigation quietly continues
0 comments
Share this
{{featured_button_text}}
1 of 4 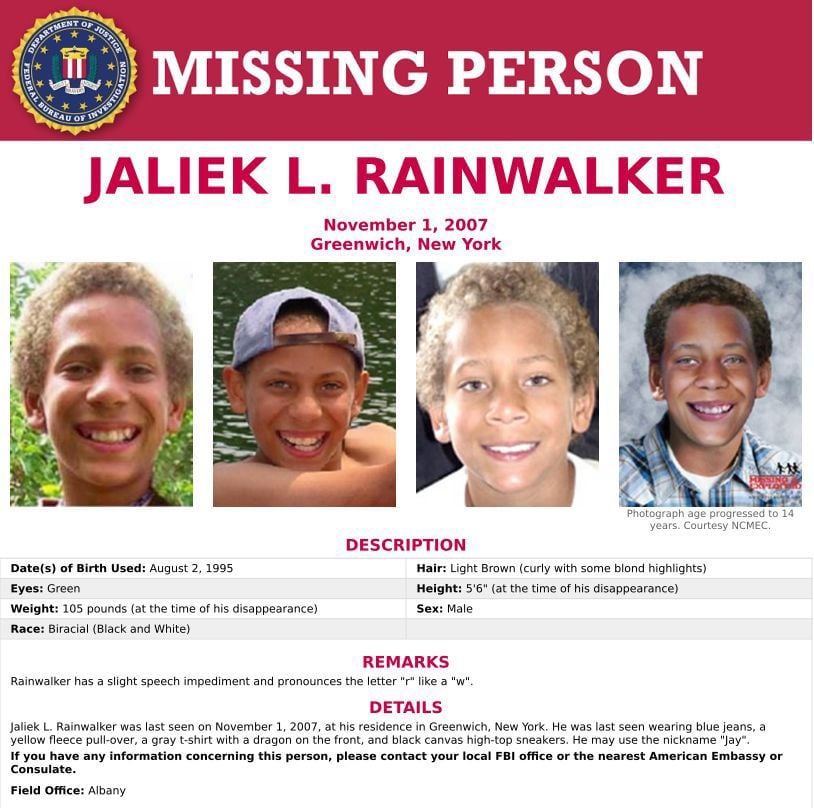 A missing person notice for Jaliek Rainwalker from 2007 is seen. 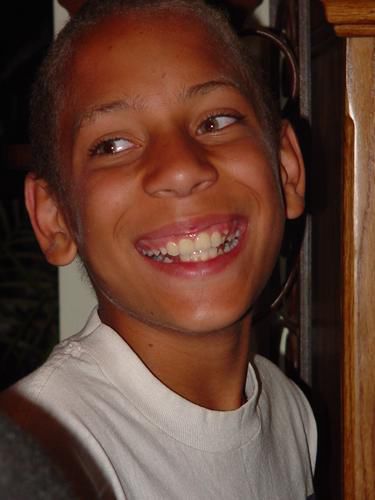 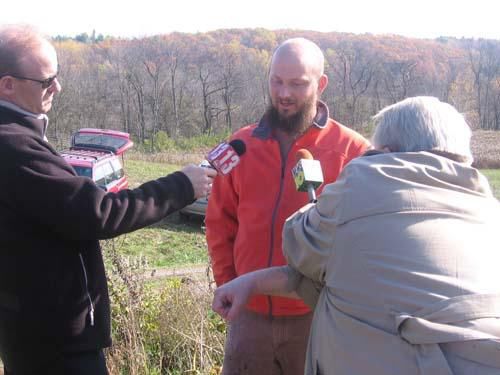 Jaliek Rainwalker has been missing and presumed dead for nearly 12 years, but that didn’t stop some loved ones and local police from wishing him a happy birthday earlier this month.

A Facebook page set up by those who followed the search for Jaliek featured a recent post from his grandmother with birthday salutations.

But neither the grandmother nor local police who investigated Jaliek’s disappearance believe the former Greenwich resident was alive to celebrate what would have been his 24th birthday.

Jaliek’s disappearance spawned one of the most in-depth investigations by local, state and federal officers in Washington County in decades and led to investigators concluding he was the likely victim of a homicide. No trace of his whereabouts, or what became of him, have been found since he was reported missing.

His adoptive father, Stephen Kerr, was labeled a “person of interest” by police.

But while the headlines have faded and media attention dissipated, the investigation remains active, as a number of Washington County and State Police law enforcement leaders, with occasional help from a national organization that helps children, are quietly continuing to work on the case.

The players involved have changed with investigator retirements, a change in district attorney and the March 2018 death of the officer who long headed the inquiry, Cambridge-Greenwich Police Chief George Bell.

And there are some who were involved who have been advocating for charges to be filed, arguing there is a stronger case than the public realizes and that the retirement and deaths of witnesses mean the opportunity to pursue a case may be passing by.

Washington County District Attorney Tony Jordan said his office has been reviewing the evidence police amassed, which was turned over to his office last spring, shortly before Bell’s death.

He said police have been following up on some “open items” at the direction of prosecutors as they continue to try to discover what happened to Jaliek and review the evidence for a possible prosecution.

Cases for murder or first-degree kidnapping, equal to second-degree murder in state Penal Law, can be brought without discovery of a missing person’s remains. But Jordan said a much stronger case can be made when a body is found.

“We have to make sure everything is covered, because we only get one shot at it (a prosecution),” he said.

Jaliek’s maternal adoptive grandmother, Barbara Reeley, said she stopped at the Cambridge Police station earlier this year to touch base with officers and she understands the predicament they are in.

The legal provision known as “double jeopardy” can bar cases from being prosecuted more than once, so the case could be brought to court only once.

Jaliek was reported missing by Kerr on Nov. 2, 2007, the morning after Kerr picked him up from a “respite” home in Albany, where he had spent several days after a dispute with another child. Kerr told police he took Jaliek to a vacant home owned by his parents on Hill Street in the village of Greenwich, not the family home in East Greenwich where Kerr and McDonald lived with other adopted children.

Kerr told police he awoke to find Jaliek was not in the home, and a note that said “goodbye.”

He and his wife, Jocelyn McDonald, have said they believe Jaliek ran away.

Police, though, have long believed that Jaliek didn’t make it back to Greenwich that night from Albany, and that somewhere between the respite home and Greenwich, his life ended.

Kerr came under scrutiny after he refused to take a polygraph test from State Police in the days after Jaliek was reported missing.

He has maintained he did not harm him but has not spoken publicly or returned media calls for years, instead retaining a lawyer who has advocated for him since the days after Jaliek was reported missing. That lawyer, Jeffrey McMorris, has criticized the police investigation, and at one point in 2008 filed a notice of claim against Cambridge-Greenwich Police, although no settlement or lawsuit followed. McMorris could not be reached for comment last week.

Police have not publicly released much of the evidence that led to them concluding that Jaliek was dead and that Kerr was a “person of interest” in that death. They said only that there were inconsistencies in Kerr’s version of events and evidence that contradicted what he told investigators was found.

Among those inconsistencies was information he gave about his route from Albany to Greenwich, which they said was shown to be false by cell phone triangulation. Also, surveillance video showed what police believe was his vehicle on Main Street in Greenwich at a time when he said he was at his parents’ house with Jaliek.

The Post-Star also learned that a friend of Kerr’s reported to police that he had a cellphone conversation with Kerr as he drove from Albany to Greenwich, in which Kerr was reported to be angry and had made numerous derisive comments about Jaliek as the boy rode with him.

Former State Police Senior Investigator Thomas Aiken, who retired in 2013 and moved out of state, oversaw the State Police involvement in the investigation from 2007 to 2013. He has advocated prosecuting Kerr and said there is significant evidence in the case that has not been revealed publicly. He would not elaborate.

He said he understood the case would be too much for Jordan’s small staff in light of existing caseloads. But he said the National Center for Missing and Exploited Children has offered to help with a prosecution, and years ago representatives of the organization who went over the evidence labeled the case “prosecution-ready.” (A call to NCMEC’s regional office was not returned this week.)

Aiken isn’t alone in his sentiments. In October 2013, then-Washington County District Attorney Kevin Kortright said he believed a murder prosecution could be pursued in the months that followed, even though no body had been found.

He said, “We would be looking strongly to doing something on Jaliek Rainwalker” after the seven-year anniversary of his disappearance passed, as that was a legal threshold where it could be concluded Jaliek was dead.

His comment was made during a re-election bid, but Jordan beat Kortright to take the district attorney post.

Cambridge-Greenwich Police Sgt. Robert Danko has replaced Bell in supervising the villages’ police departments. He was with the departments during part of the investigation, before taking a job with the Washington County Sheriff’s Office, but said he has been working to get up to speed on the investigation since he took over last year.

“We’ve been going over it and talking about trying to do some different things,” Danko said.

Jordan said he has been in communication with Danko about the investigation, and the State Police from the Greenwich station and the agency’s Major Crimes Unit continue to work with him.

“My priest would often say to me, ‘Patience is a virtue,’” Jordan said. “The police are continuing to work on it and follow up on any new leads to develop evidence.”

State Forest Ranger Lt. John Solan is one of the few local law enforcement officers who has been assigned to the investigation since it began, overseeing hours and hours of ground and water searches over untold miles by rangers, firefighters and volunteers after Jaliek was reported missing.

There was initial concern that, if Jaliek had run away, he could have gotten hurt or fallen in the Batten Kill, which runs through the village three blocks from his home, so divers searched large portions of the river and the Hudson River both near the Batten Kill confluence and in the Troy area.

Drone technology that is available now but wasn’t in 2007-08 would have helped tremendously back then, Solan added.

Solan said last week there have been no recent search efforts, as no leads have developed on new areas to cover. But rangers have been watching for evidence in the case whenever they are in the field or water in southern Washington County.

“Anytime we are on the Batten Kill or Hudson, we are always keeping an eye out,” he said.

Weeks after their son’s disappearance, Kerr and McDonald picked up their family and moved from East Greenwich to a two-story home on Route 153 in the hamlet of West Rupert. The move occurred as the family’s living situation in a home without plumbing in East Greenwich and Kerr’s possible role in Jaliek’s disappearance came under scrutiny from the Washington County Department of Social Services.

Kerr has made no reported public comments about the case since it was revealed he refused to take a polygraph test, apparently on advice of legal counsel. That didn’t change last week when a reporter stopped by his home.

No one answered the door at the home in the rural hamlet, just east of the Salem town line. But the next day, Kerr phoned a reporter who left a business card and note asking for a call back. He told the reporter to not come to his home, and while on the phone would not discuss the disappearance of Jaliek.

“If you have any questions for me, use the U.S. Postal Service,” he said.

As of press time, he had not responded to a letter that was mailed to him Aug. 16 with a list of questions.

Vigil for Jaliek Rainwalker planned after tractor parade in Greenwich

A group is planning a vigil in Greenwich to mark 12 years since the disappearance of Jaliek Rainwalker.

BLOG: Stories of the decade

Here are some of the big stories we remember from the past decade, as we enter a new one.

A missing person notice for Jaliek Rainwalker from 2007 is seen.