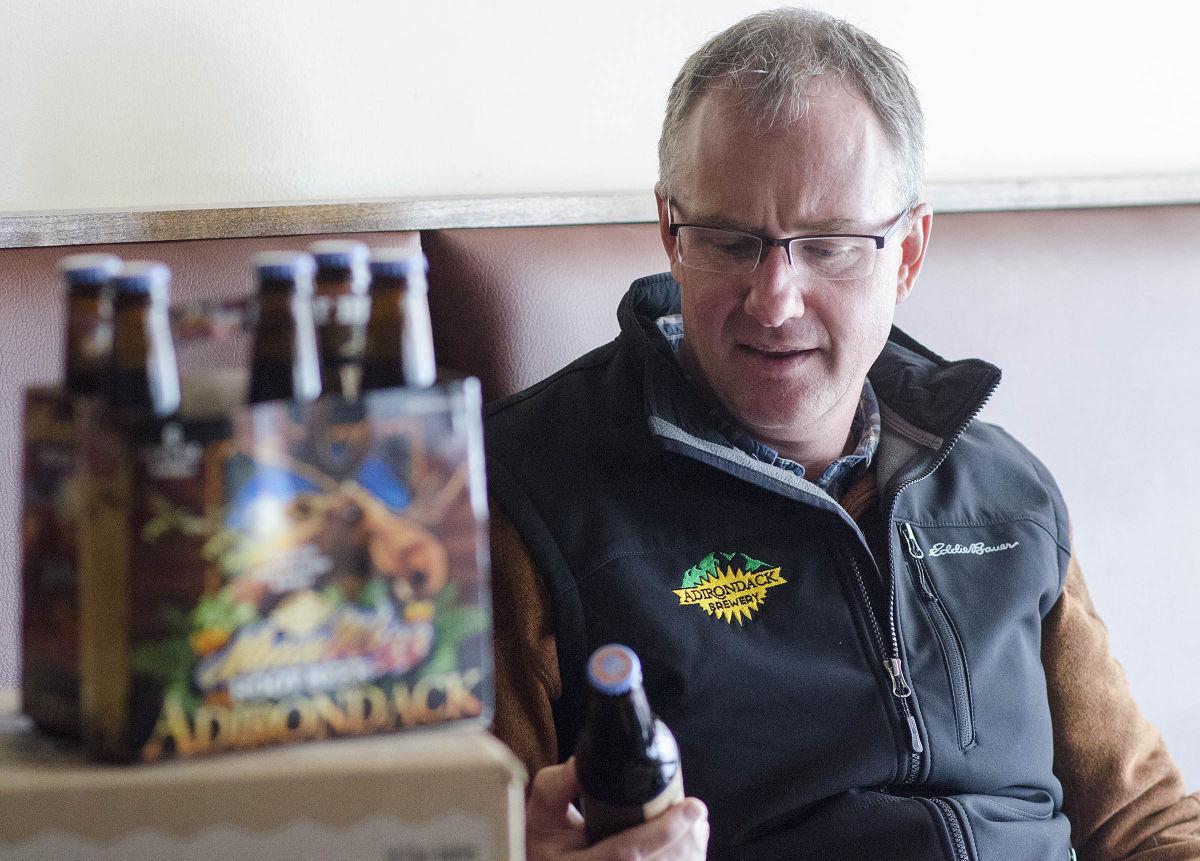 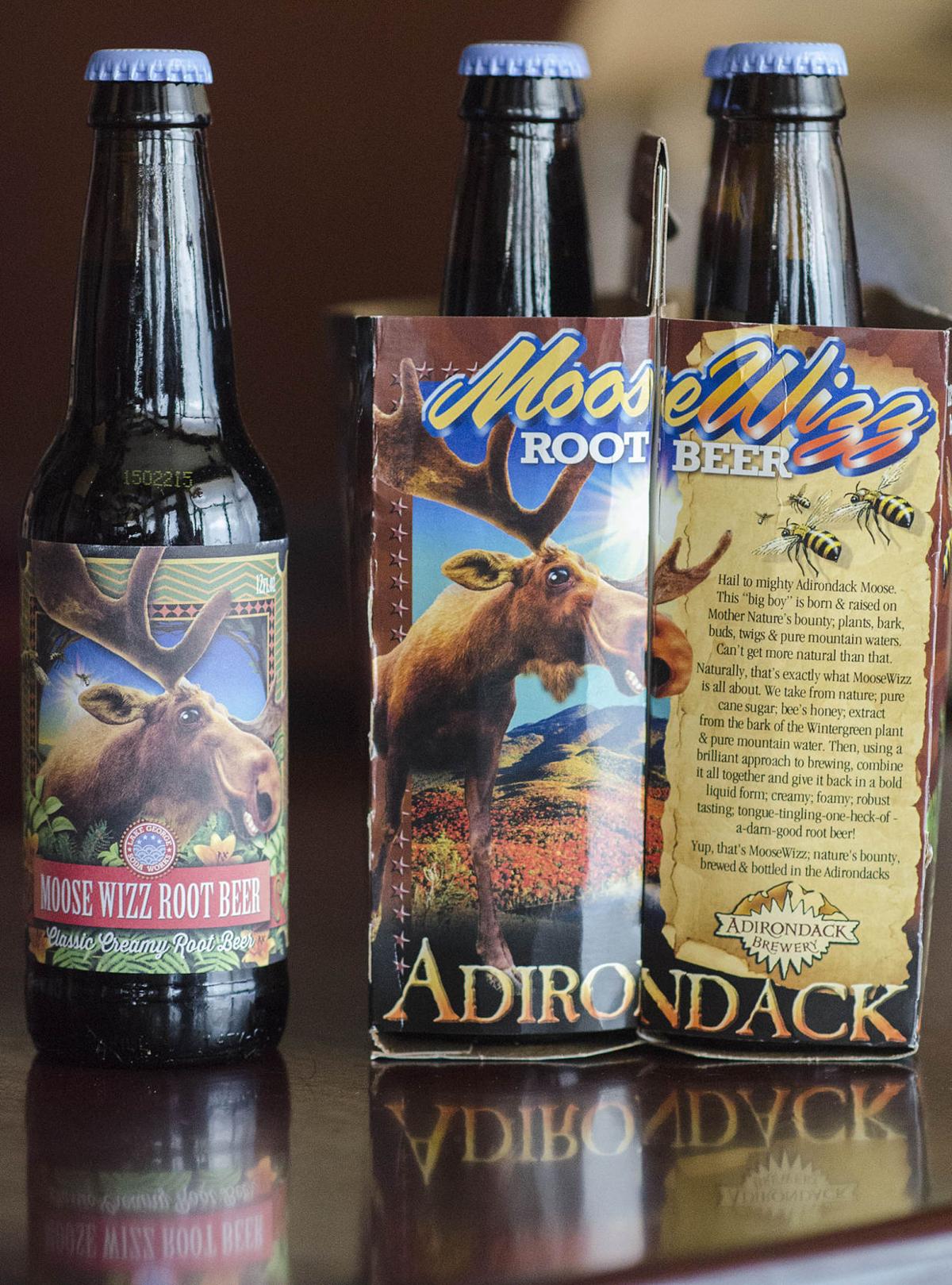 Moose Wizz root beer bottles sit on a table at the Adirondack Brewery & Pub on March 16.

LAKE GEORGE  Antlers will lock next week in the case of a trademark infringement lawsuit filed against a local brewer.

The aggressor is Canada-based Moosehead Breweries Ltd., which accounts for 3.7 percent of the Canadian beer market with its various brands, including Moosehead lager.

The target is Adirondack Brewery & Pub on Canada Street, which makes about 35,000 barrels of beer each year. Some of that beer is marketed with labels that feature animals that can be found in the Adirondacks — bears, bobcats and beavers among them.

But the brewery also makes Moose Wizz root beer. And there’s the rub, according to the Canadian beer maker.

Moosehead filed a lawsuit in March that seeks to stop the Lake George brewery from making and selling Moose Wizz. The lawsuit, which claimed beer drinkers might be misled into thinking they’re buying Moosehead beer, demanded a jury trial and asks that all profits garnered from the sale of Moose Wizz be turned over to the Canadian company.

Lake George Brewery owner John Carr said Friday that his lawyer will spend three days next week in depositions with Moosehead’s law firm, Albany-based Devaprasad PLLC, which has been hired specifically to pursue the case against Adirondack Brewery.

Carr said the depositions come after an earlier hearing in the case, in which a judge indicated there appeared to be little merit to the argument consumers might be confused by the cartoon moose that adorns Moose Wizz root beer’s label and packaging.

“It’s absolutely ridiculous,” Carr said of the three-day deposition. “It’s as if this were some massive murder trial or something. But at the same time, my attorney has to sit there at so many hundreds of dollars an hour with a stenographer and whatnot, so the whole thing is just really out of control and a nightmare.”

S. David Devaprasad, principal of the law firm hired by Moosehead, said previously that the Canadian firm had to hire a New York-based law firm in order to pursue the case in local courts. Devaprasad did not return a call for comment Friday.

Moosehead Breweries does not list contact information for principals or for medial inquires. A “consumer inquiries” telephone number, listed on the company’s website, stated Friday that there was no one available to take calls, and that a preferred method of contact was to a general inquiries email address.

An email sent to that address seeking comment from the company’s president, Andrew Oland, garnered no response Friday.

Adirondack Brewery isn’t the first to be targeted by Moosehead over its trademark.

In 2004, the company settled a nine-year trademark infringement lawsuit against Big Sky Brewing, of Montana, because it makes a beer called Moose Drool.

In the end, Big Sky agreed not to sell the beer in certain states — mostly those east of the Mississippi — in order to end the litigation.

Carr said he’s sure Moosehead’s real strategy is to bringing its financial superiority to bear against craft brewers, who are increasingly winning market share from larger companies.

He has launched an online petition and will soon launch a blog dedicated to calling out Moosehead on its claims of ownership over the animal and all images of it.

The online petition had garnered more than 700 supporters as of Friday.

“We’re getting a lot of support from people; even retailers and other brewers around the country are signing onto it,” Carr said.

Brendan Palfreyman, a craft beer trademark lawyer with Harris Beach PLLC in Syracuse, has been following the case.

He said three days of deposition is not unheard of in trademark infringement cases.

“It really depends on how many people they need to depose,” he said. “This doesn’t seem like an especially large case, but in other cases I’ve been part of, there have been weeks of deposition.”

The start of deposition means the case has entered the discovery phase, Palfreyman said. Both sides will collect their evidence, after which either side can ask for a summary judgment based on the facts gathered.

If the court decides, however, that there are questions of fact that can’t be answered by the gathered evidence, the case typically goes to trial, Palfreyman said.

And even if a summary judgment works in Adirondack Brewery’s favor, an appeal can be made to the U.S. Second Circuit Court of Appeals, Palfreyman added.

And it’s not unusual for companies with fewer resources to cave in as the bills mount.

“There’s always a disadvantage faced by David in a David-Goliath scenario where you can be outspent by a larger opponent,” he added.

For Carr, the issue isn’t about money. It’s about fighting the efforts by a company to own the rights to all images of a wild animal, he said.

“The moose is a free animal and should be treated as such in the court room,” Carr states in the online petition. “Telling us that we have to rename our product is telling every other company with a name or product name with the word ‘Moose’ in it that they must change as well.”

For a link to the online petition visit poststar.com or visit www.change.org/p/derek-oland-stop-corporate-bullying-freethemoose

Moose Wizz root beer bottles sit on a table at the Adirondack Brewery & Pub on March 16.