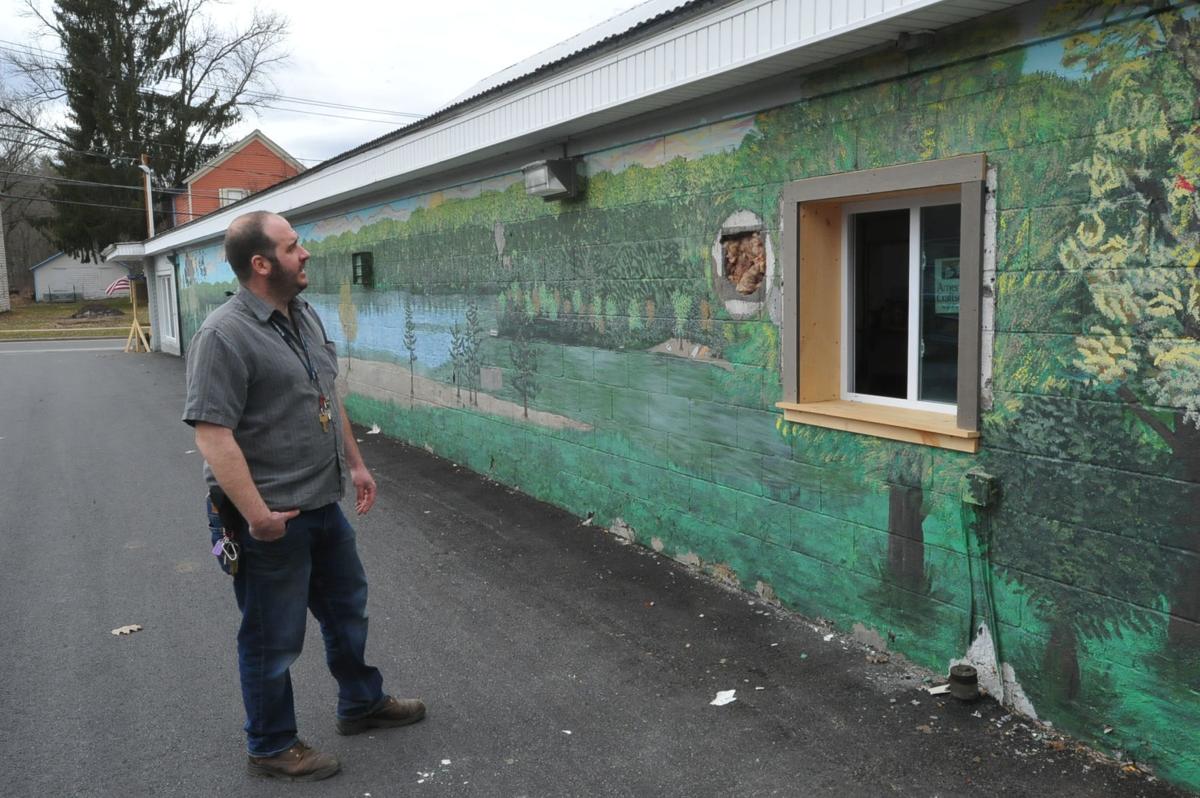 James Mackey admires the drive-up window he recently added to Luzerne Market so customers can call in orders and pick them up without going inside the store. 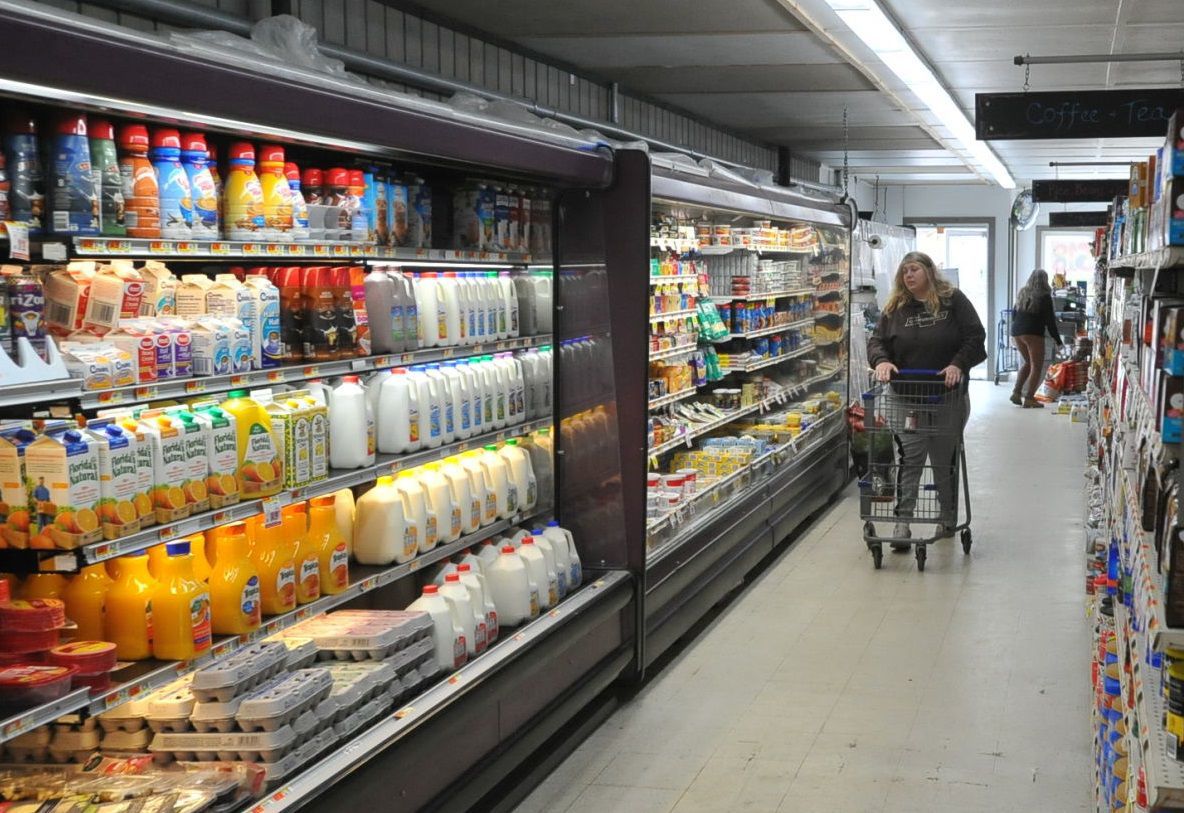 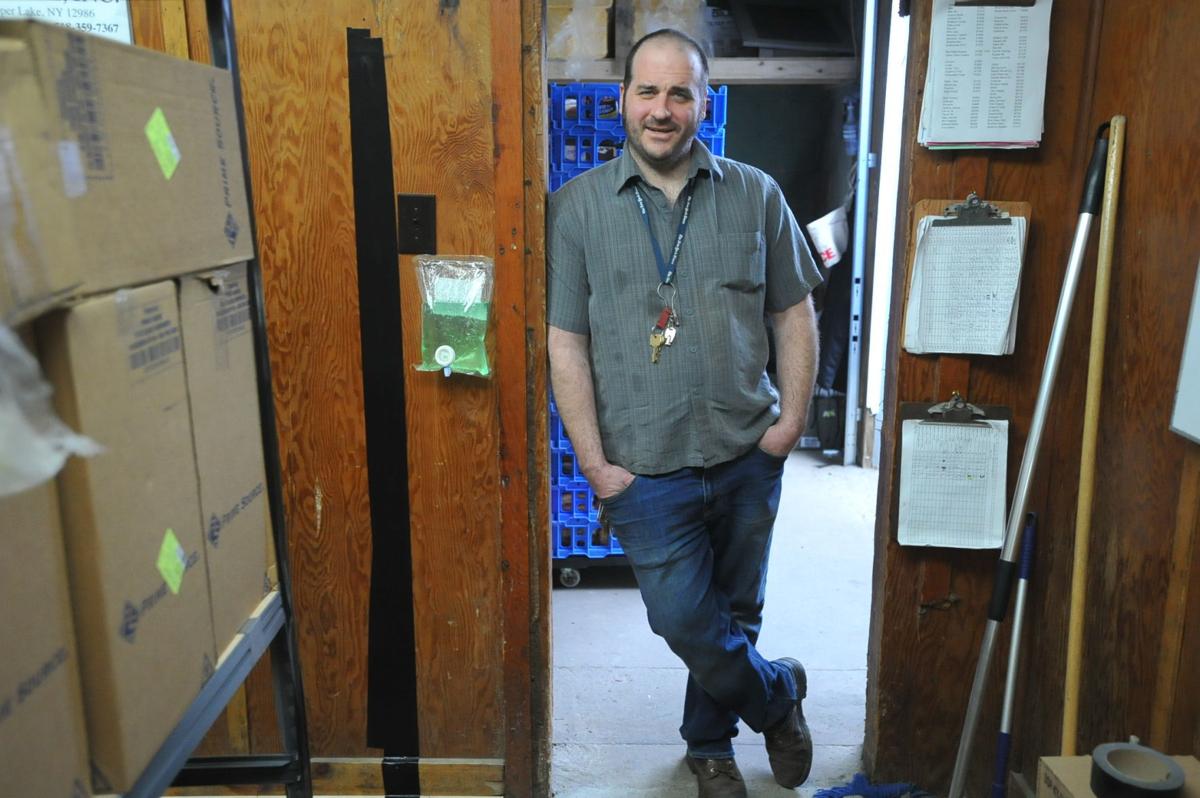 James Mackey, co-owner of Luzerne Market, stands in the back of the store, which is used as a storage/drop-off and office area. 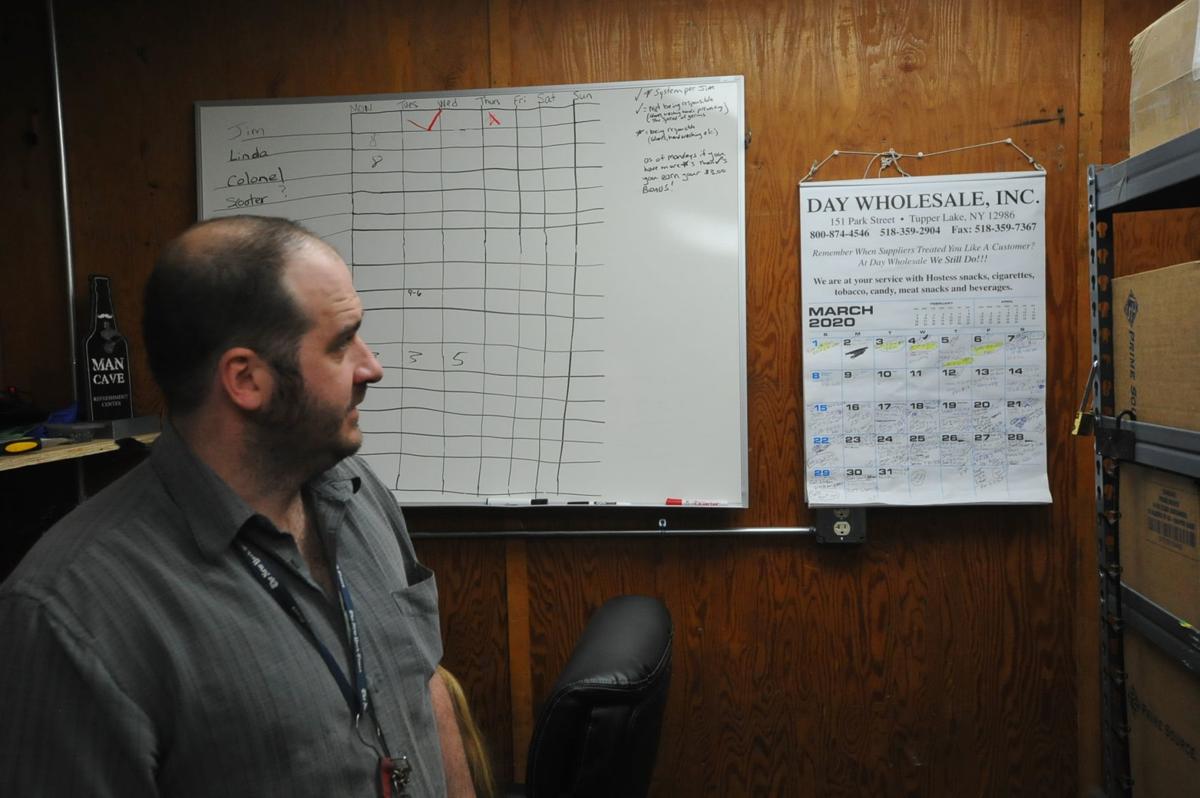 James Mackey, co-owner of Luzerne Market, eyes a work-shift calendar on the wall in the back area of the store that shows how March started in a normal fashion but things got crazy as the month wore on.

LAKE LUZERNE — James Mackey, 38, and co-owner (with his uncle) of the Luzerne Market, was speaking rapid-fire in a voice midway between a drill sergeant’s and a sleepwalker’s.

“Business is up 100 percent. We’re doing better than summer hours. We just bought a walk-in freezer. We were doing a lot of addition, remodeling, then all this happened.

“Our average sale was 15, 17 dollars. Now people are buying more, stocking up I guess. Because we have a better supply of groceries, people are coming here from other places.”

Mackey’s family has owned the store for 40 years, but he only has been running it by himself for about two. He recently moved into the apartment above the store, then worked 40 hours straight, developing laryngitis in the process and losing his voice for four days.

He wrote notes and put them up everywhere, which worked so well, he wanted to pretend he still couldn’t speak after his voice came back.

“I’ve never seen them work so hard,” he said of his staff.

He told the staff that anyone who considered themselves at-risk during the pandemic could take time off, and he gave them all an extra week of sick pay.

Everyone who stayed on the job got a “hazard pay” raise of $3 an hour.

He reconfigured the back of the shop so deliveries could be made outside, instead of having deliverers come into the shop to restock, and he knocked a hole in the wall by the parking lot for drive-up orders.

His voice is still gravelly from the laryngitis, and he has a few days’ worth of dark stubble on his chin and neck. He appears exhausted and indefatigable at the same time, marching from station to station in the store — deli, beer cave, makeshift office — and skipping from one subject to the next.

Rock ‘n’ roll blasts down the aisles from speakers that he just set up, making it even harder to follow his patter.

“I’d like to see how the numbers work, but I haven’t had time,” he said, referring to the increase in business and in payroll expense. “I’ve got guys jackhammering in the basement. We created six virtual computers so some people can work remotely.

The store is open from 9 a.m. to 6 p.m., but with cleaning and restocking, they’re working around the clock, he said. On a recent morning, 15 people were in line waiting for the store to open.

He set up special hours, early and late in the day, for elderly customers and those with weakened immune systems.

He called his mother recently about organizing a blood drive at the store, maybe in the parking lot. He managed to order face shields, which should be coming “in about three days,” and he’s going to have the cashiers and other staff who interact with the public wear them.

He employs about a dozen people, but “I’m going to need someone for the drive-up window,” he said.

A Glens Falls man faces multiple misdemeanor charges after his attempt to do a wheelie on his motorcyclist caused a crash.

Two people were arrested on drug charges on Friday at a Queensbury motel.

State Police are investigating a fatal crash involving a tractor-trailer that occurred Friday afternoon on the Northway.

A Queensbury woman was arrested Thursday after police found evidence of "substantial narcotics use" in her apartment.

Police: Contractor took $110,000 and did not perform work

An Elizabethtown contractor was arrested Sunday for allegedly taking about $110,000 from a victim and not performing the work.

A Hudson Falls man was arrested Monday on drug charges including allegedly giving marijuana to a 14-year-old.

Lake George officials are expecting big crowds for Memorial Day weekend, but acknowledge that things will be different this year.

Law enforcement officials are investigating a string of overdoses linked to cocaine laced with fentanyl.

Organizers of the Washington County Fair expect the 137th annual fair to be held on its scheduled August dates.

A Queensbury man was ticketed for allegedly failing to stop at a stop sign and causing an accident Friday in Queensbury.

James Mackey admires the drive-up window he recently added to Luzerne Market so customers can call in orders and pick them up without going inside the store.

James Mackey, co-owner of Luzerne Market, stands in the back of the store, which is used as a storage/drop-off and office area.

James Mackey, co-owner of Luzerne Market, eyes a work-shift calendar on the wall in the back area of the store that shows how March started in a normal fashion but things got crazy as the month wore on.