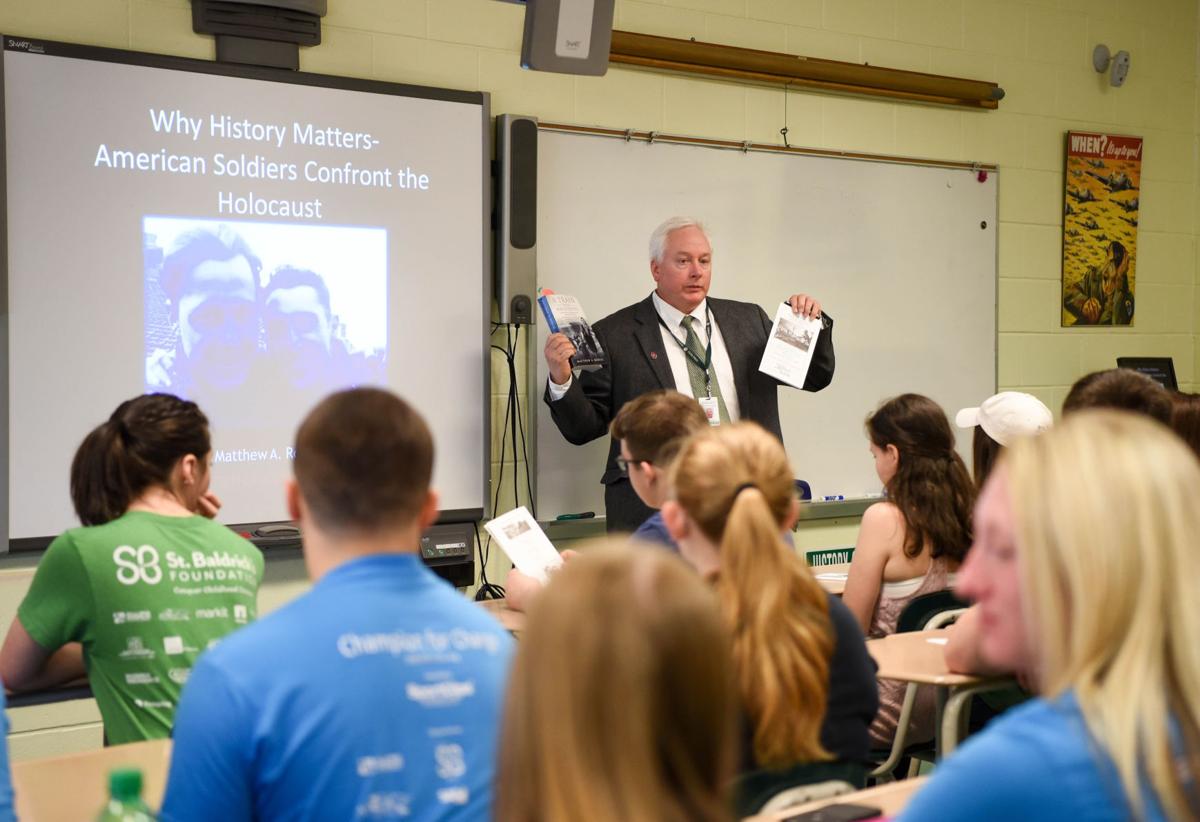 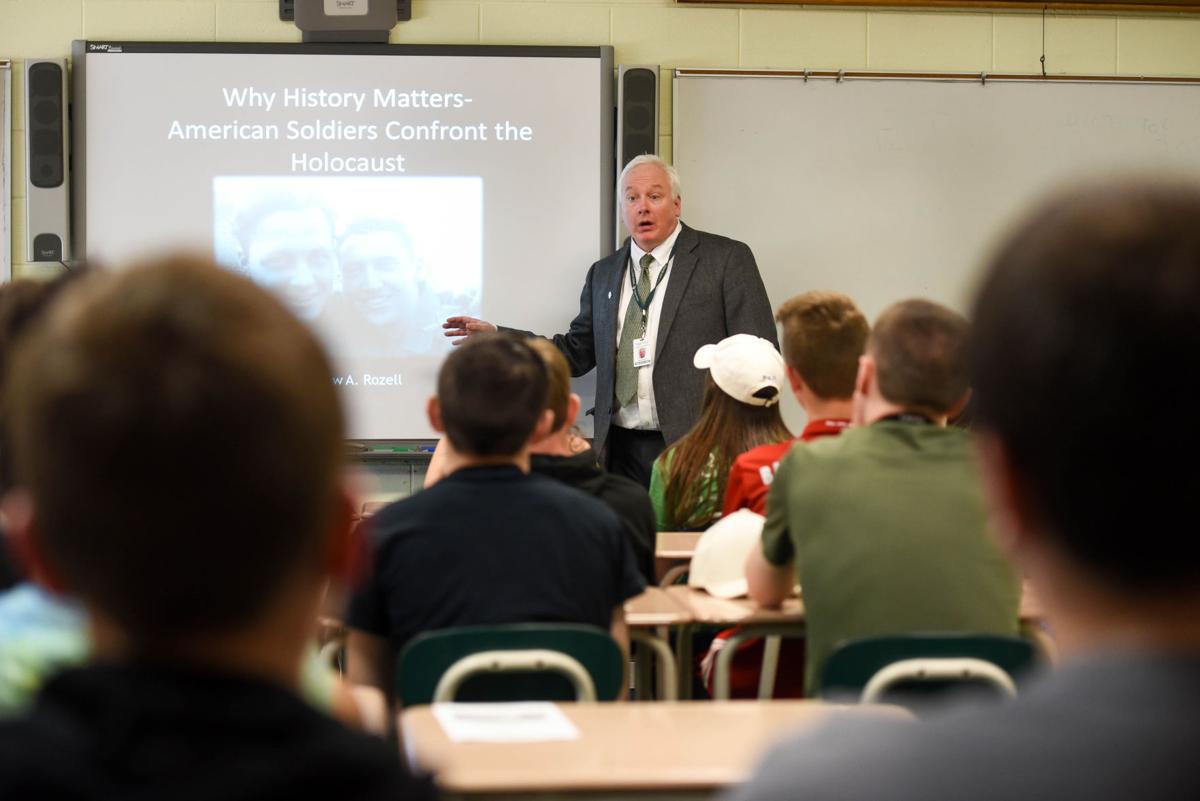 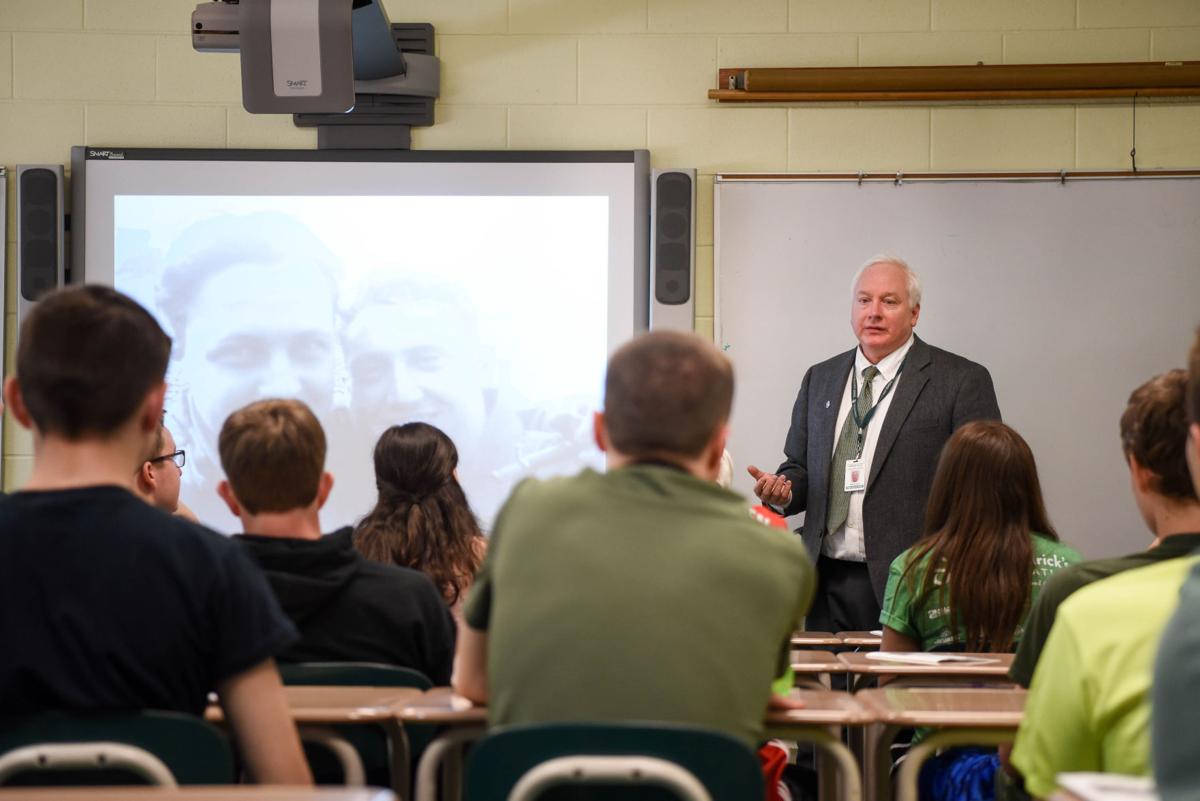 Matt Rozell gives a talk about the Holocaust on April 11 during a Student Professional Development Day at Hudson Falls High School.

HUDSON FALLS — For Matt Rozell, teaching history has never been simply about names, dates and geography.

It has always been about the people and the stories, the memories and how events affected those involved.

So as Rozell prepares to retire after three decades as a teacher at Hudson Falls High School, he sees his work as only partially done.

“I have a moral commitment to keep telling these stories,” Rozell said Wednesday, standing outside the classroom where students were watching a video about his book, “A Train Near Magdeburg,” about the rescue of Holocaust survivors by U.S. soldiers.

“We have these hundreds of interviews with veterans,” he said of class projects he has been doing with his students for two decades. “It’s my job to make these stories known, because so many of them are dying. We need to tell their stories, otherwise what good is it to have done these interviews and gotten these stories?”

Rozell has written two books and is widely known among Holocaust survivors for the Magdeburg book. He has a third book already written and at least three more planned.

Rozell found he had so many interviews about so many aspects of the war that his first book held only a fraction of the stories.

“The Things Our Fathers Saw” focused only on the Pacific War, while he hopes in his future books to expand to various parts of the war in Europe.

But there was one other book to write immediately — “A Train Near Magdeburg,” in which Rozell works to reunite tank company veterans with those left alive from a group of 2,500 the Germans had left to die in a train car but the soldiers saved.

“What’s amazing about this is that you have these reunions of people in camps and the soldiers in the units who liberated the camps. But here, you have the actual soldiers meeting the actual people they saved,” Rozell said.

A legacy of teaching

Rozell’s father Anthony taught history at Glens Fall High School from 1963 to 1993. Of all the newspapers, posters, certificates and other material on the walls of classroom A-9 at Hudson Falls, one of the things Rozell is most proud of is a Post-Star front page story from Feb. 2, 1992, about him and his father.

“There were a lot more veterans around then,” he said.

He began collecting oral histories in the mid-1990s, during the 50th anniversary of the war, then started a website in 2000, which helped him connect with many more veterans.

That might have ended it, but the staff at Bergen-Belsen, the camp the survivors had been at, publicized the website, and in March 2006, Rozell heard from Lexie Keston of Australia, then several more survivors, and decided to start reunions, three of which were held in Hudson Falls, the last in 2011.

His own fan club

Alyssa Fountaine, a senior who has taken three classes with Rozell, got emotional when she thought about him no longer teaching.

“All of the teachers are amazing here, but there is something special about him. He’s not about talking at his students, he talks to his students. He is so dedicated to it all,” Fountaine said. “He takes everything he knows and relates it to us. It’s beautiful.”

“He is making sure we never forget,” she said. “He is an amazing teacher. I am sad to see him leave.”

“It’s the style of his teaching, and the way that he connects his real-life experiences with his students,” said Lucas Kayser, a senior and a student in the Holocaust class. “He’s done all these things, and he shares it with us.”

“You cannot put a price on the impact he has had on this community,” said Principal James Bennefield. “It’s work done by the kids, and it’s history. It’s hard to believe all this just started as a class project.”

Before the World War II projects got started, when Rozell was a student at SUNY Geneseo, he was taught by Professor David Starbuck, then at Rensselaer Polytechnic Institute and now at SUNY Adirondack and Plymouth State in New Hampshire.

Starbuck is a well-known archaeologist who has done digs throughout the area.

“Matt first dug with me when he was an undergraduate. It was probably 1985 or 1986, and I was digging the American Headquarters for the Battle of Saratoga. Little did I know that he would continue to do archaeology for many years after that,” he said.

It was Rozell who discovered the smallpox hospital at Rogers Island, Starbuck said, and he was also involved with the discovery of the sutlers’ house.

“I can also say that over the years that he was a field supervisor on our digs, he had an incredibly loyal following of high school students, college students and volunteers of all ages,” Starbuck said. “They were always incredibly devoted to him.”

Looking back at local history: April 18

Take a look back at local history. Here are the top stories for April 18 from one, five and 10 years ago.

"A Train Near Magdeburg": Book being converted into documentary

The story was almost never told.

Matt Rozell gives a talk about the Holocaust on April 11 during a Student Professional Development Day at Hudson Falls High School.