Become a Member
Read Today's E-edition
Share This
Police: Human remains found at site of former home of accused killer in Minerva
2 comments
Share this
1 of 2 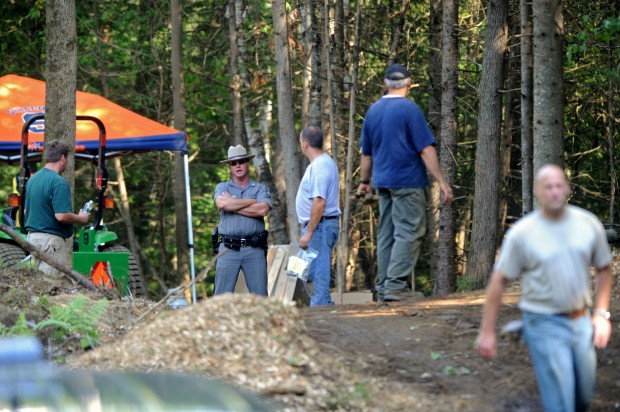 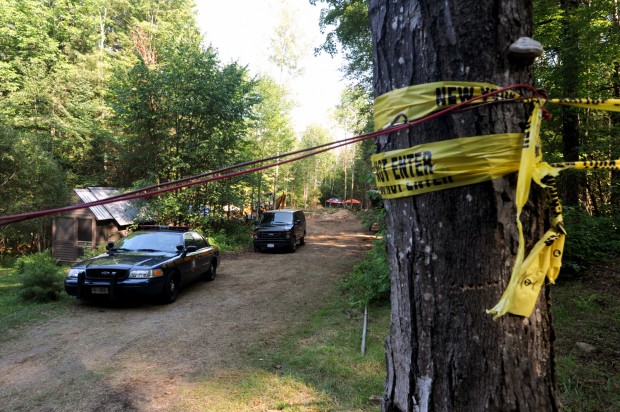 Jason McKibben - jmckibben@poststar.com State Police announced that human remains were found underground off Wilson Road in Minerva on Tuesday morning, in an area where Thomas and June Collard once lived. State Police have been focusing their search for the remains of June Collard at the site.
By DON LEHMAN

Police said human bones were found in an area that would have been behind the Wilson Road mobile home where Thomas Collard lived with his wife, June Collard. State Police Maj. Richard Smith said the remains will be sent to the State Police crime laboratory for DNA testing to determine if they belonged to June Collard, and police were continuing to comb over the site later Tuesday in an effort to find additional remains.

However, Smith said the bones are believed to be those of June Collard, who disappeared in November 1980 at the age of 30. Her husband told police he believed the mother of three young children ran off with another man, but relatives and investigators long suspected he killed her.

They got a break last month when new evidence in the case, which has not been disclosed, prompted State Police to re-interview Thomas Collard where he lived in Alabama and he allegedly confessed, telling investigators where they could find his late wife's body.

Smith said troopers, working with private excavating companies that included Glenn Battease Excavating of Queensbury as well as the state Department of Transportation and town of Minerva, have pored over 1,200 feet of property where the Collards lived before June Collard disappeared. Thomas Collard sold the property years after she disappeared, and the mobile home that sat on the land burned when a subsequent owner lived there.

There was extensive amounts of junk on the property that police had to remove before they could begin digging and sifting through dirt by hand in hot, humid weather.

It's an area where Collard recently told police he dumped his wife's body in a hole before filling it in, officials said.

Troopers found the bones late Tuesday morning, and an anthropologist was brought to the site to confirm they had belonged to a human. Up until that point, they had found no evidence the body was on the property.

Smith would not say what bones were recovered, and said he could not estimate how deep underground they were found. He said police were particularly interested to find one or both of the femurs or teeth from the mandible, since they are said to be best for extracting DNA for testing.

It was unclear if a cause of death could be determined, police said.

"We'll get the bones to the New York State Police lab and ask they be examined as quickly as possible," the major said.

Smith said the area of the property where the bones were found was near where the Collard home was located.

"At the time, it would have been behind where the trailer was on the property," the major said.

Sprague said having the victim's remains "makes my case better," but she has said the case could be prosecuted even without a body being found.

Collard, 62, has pleaded not guilty to second-degree murder and is being held in Essex County Jail pending further court action. Police have said he told them he punched her in the face during an argument.

The search had been ongoing for a week-and-a-half, after Thomas Collard was arrested and returned to New York.

"They're down there all day, every day," said Fish's mother, Kathy Fish. "At night there's a trooper there with lights on."

Kathy Fish said her husband grew up on Wilson Road, and knew and feared Thomas Collard as a child.

When her husband was a boy, he was told to steer clear of Thomas Collard, she said.

"He was a strange man. His (her husband's) parents told him when he went down there, stay on the other side of the road," Kathy Fish said.

Girl with no hands, one leg becomes acrobatic dancer

Girl with no hands, one leg becomes acrobatic dancer

Goat wanders inside office building and steals documents in India

Goat wanders inside office building and steals documents in India

Jason McKibben - jmckibben@poststar.com State Police announced that human remains were found underground off Wilson Road in Minerva on Tuesday morning, in an area where Thomas and June Collard once lived. State Police have been focusing their search for the remains of June Collard at the site.
© Copyright 2021 The Post-Star, Lawrence & Cooper Streets Glens Falls,NY | Terms of Use | Privacy Policy | Do Not Sell My Info
Powered by BLOX Content Management System from TownNews.com.
You don't have any notifications.