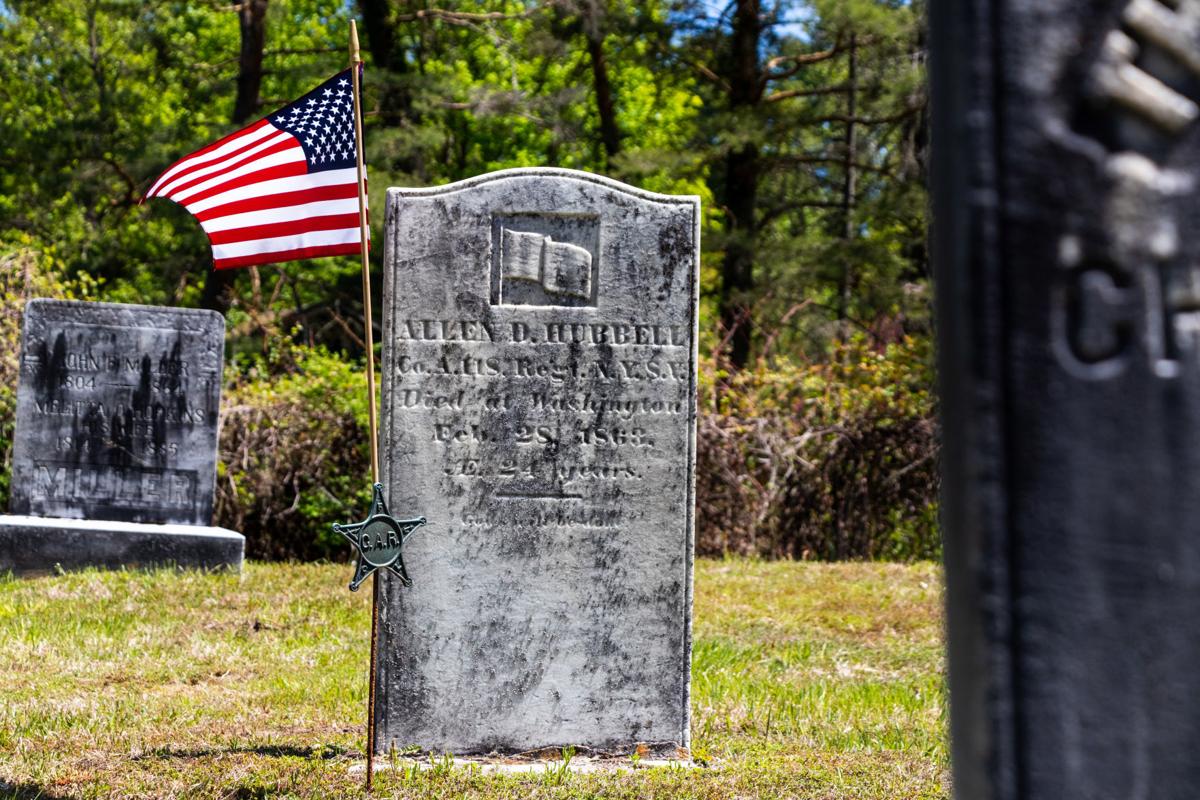 A breeze shifts the flag placed at the gravesite for Allen D. Hubbell, Co. A. 118th Regiment, N.Y.V, at the Sunnyside Cemetery along Sunnyside Road in Queensbury on Friday. The tombstone is engraved "died at Washington, Feb. 28, 1863." Hubbell's name is also etched onto the side of the Civil War Monument in Glens Falls as a soldier who died from disease. 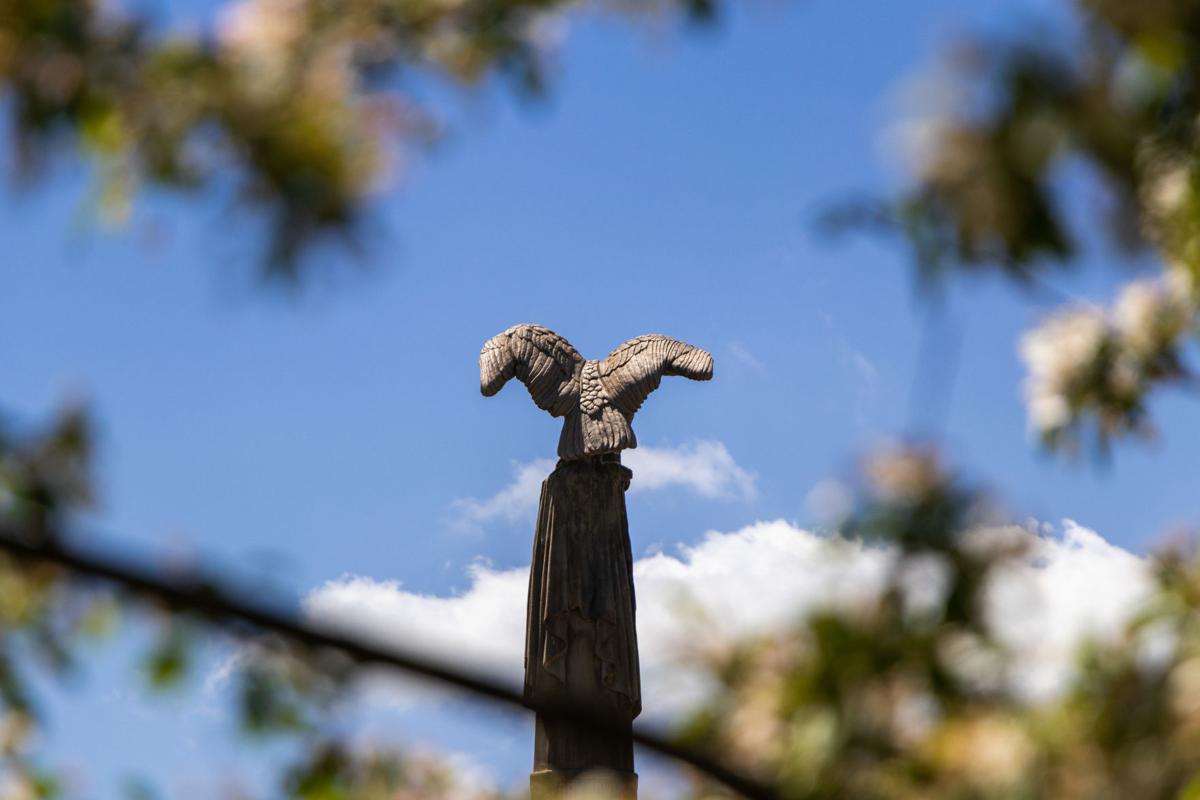 The eagle perched on top of the Civil War Monument in Glens Falls on Friday afternoon. 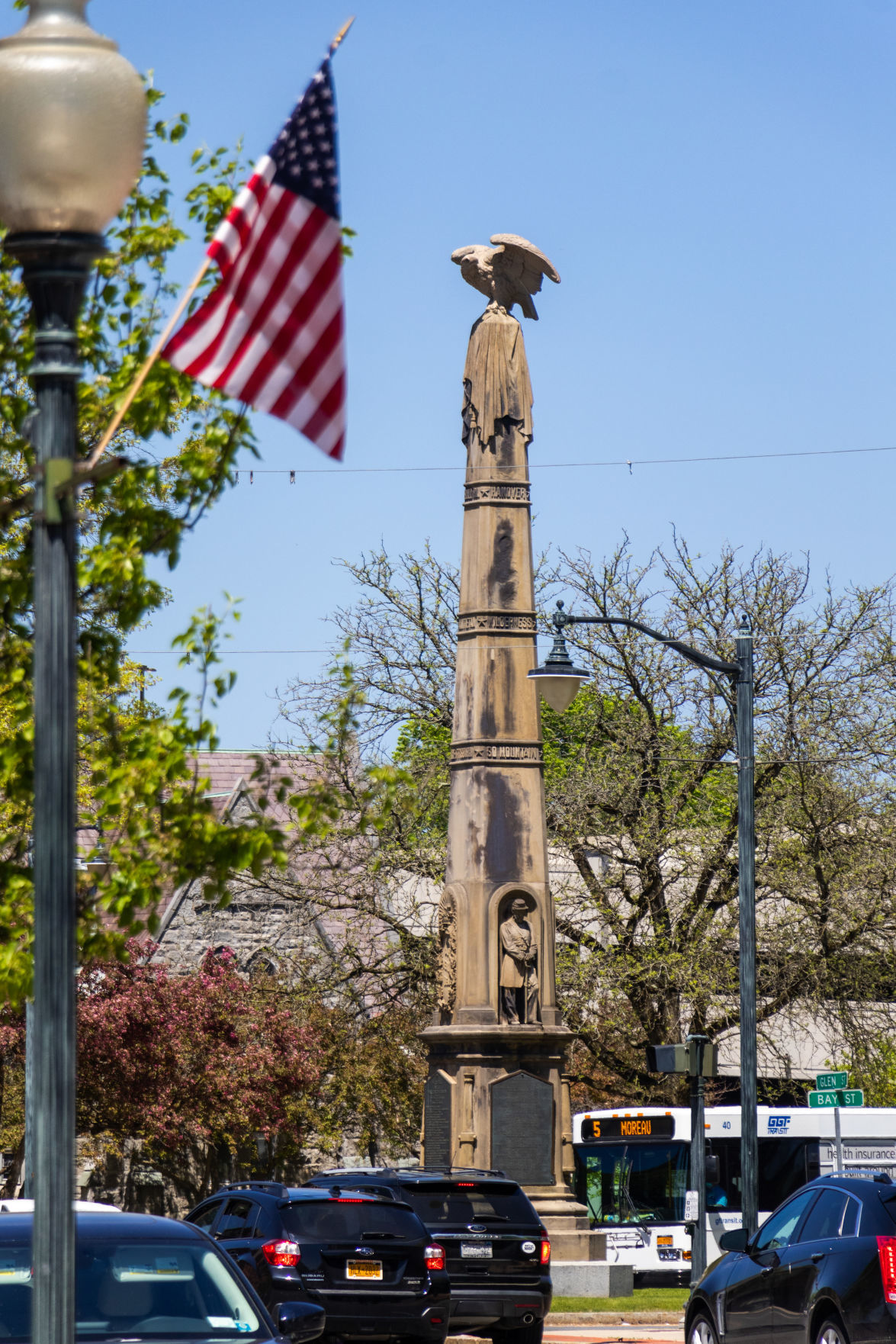 Cars pass by on a busy Glen Street near the Civil War Monument in Glens Falls on Friday afternoon.

A northbound train carrying surviving members of the 118th New York Volunteers Infantry, known as the Adirondack Regiment, to Plattsburgh to be mustered out of Civil War service made a brief stop at Fort Edward on June 18, 1865.

Fifteen soldiers from Warren County conveniently missed the train when “the impatient locomotive” pulled out of the station.

“By another still more unaccountable accident they soon found themselves in Glen’s Falls, surrounded by friends and comrades of long ago,” The Glen’s Falls Republican reported, tongue-in-cheek. “There were welcomings and hand-shakings and queer questions for the brave fellows, who recounted their hair breath scrapes by flood and field with manly blushes which made us proud of them.”

The returning soldiers, who had left Plattsburgh on Sept. 1, 1862, had their fill of military life, and didn’t care to stick with the unit a few days longer just for a formality.

No doubt they grieved for their many comrades who had died in combat.

“Eight battlefields tell of their valor,” the Republican editorialized.

Civil War posts flourished in the region a century ago

Those who died from the 118th are among the countless casualties of war who will be honored in spirit on Memorial Day, even though most community observances have been canceled because of the COVID-19 pandemic.

Some 40 other surviving Warren County members of the regiment, one of several in which local men served, returned to Glen’s Falls (which is how the village — now the city of Glens Falls — was punctuated at the time) on June 27, after mustering out, and were welcomed with ringing of church bells, firing of guns and sounding of factory whistles downtown.

“The display of flags from various points, the crowd of men, women and children in our streets, and the flutter of handkerchiefs from the top of many a gaily crowded building, formed a pleasing picture,” the Republican reported on July 4. “The cavalcade marched through the village and at length halted at Union Hall.”

They had passed two Thanksgivings and two Christmases away from home.

Col. John Cunningham, in his book, “Three Years With The Adirondack Regiment,” recalled a scene in camp on Christmas Eve 1862.

“In one tent Christmas carols were being ‘executed,’ and in another a strong voice was wrestling with Luther’s battle hymn, ‘A Mighty Fortress is Our God.’”

Cunningham joined a prayer meeting at the chapel tent.

“Afterwards I sat for a while on a stump outside our camp and heard singing of hymns in other nearby camps,” he wrote. “I wondered when this ‘peace on earth’ would come.”

There was rejoicing in Glens Falls in June 1865 when peace had finally come and members of the 118th returned home.

“Now that the Civil War is over, let us welcome them to our hearths and firesides, remembering the while that the courage and self-sacrifice, and that of their noble comrades, we are indebted for the restoration of peace and the blessings of a nation indivisible,” the Republican editorialized.

Still fresh on the soldiers’ minds when they got back home and reunited with family and friends, no doubt, was the fall of the Confederate capital of Richmond, Virginia, on April 3, 1865, a defining moment that the war was coming to a close.

The 118th was the first federally organized unit to enter Richmond.

By that time, they had seen action at Suffolk and South Anna in 1863 and at Coal Harbor, Fort Harrison, Bermuda, Swift Creek, Petersburg, Fair Oaks, Drury’s Bluff and Crator in 1864.

Ceremonies and memorabilia were of little solace after 33 months of war.

“One of our men, when paid off and discharged and thus becoming the citizen-owner of his rifle, said: ‘I’ll tell you what I’m going to do with that gun,” Cunningham wrote in his book, serialized in The Post-Star in 1920 and 1921. “’I’m going to take it home, stand it out in our backyard where the rain will rain and the snow will snow on it and every little while I’m going out and say to it, ‘Rust away goll darn, I’m no longer obliged to keep you bright and shiny.’’”

Out of about 1,000 men in the volunteer unit, 292 died during service, either in combat or in sickness, according to the New York Military Museum at Saratoga Springs.

Another 238 men were wounded and recovered.

“In the first assaults on Petersburg, it lost 21, killed and wounded. It was next engaged at Fort Harrison, where it lost 67, killed and wounded,” Frederick Phisterer wrote in his 1912 book, “New York in the War of the Rebellion.”

The unit lost men from sickness when camped at Washington, D.C., even before reaching the battlefield.

“We were doomed to do duty in a filthy city, and the sickness and death which followed was truly heart-rending,” Phisterer quoted an un-named soldier. “Upon the 25th of Feb., John P. Evans closed his eyes to this world in camp.”

Four more deaths would be mourned in the coming weeks.

“Thus it was that in a little more than one month five of our best men had been taken away to the untried realities of eternity.”

Casualties and injuries at Cold Harbor in late May and early June of 1864 were severe.

“Our regiment now numbers scarcely one-half of what it did twenty days ago,” Cunningham wrote. “A chapter of incidents might be related in this connection — heroic deeds of even drummer boys in getting at the wounded under cover of darkness, getting water and food to them.”

“Its high moral qualities are still more illustrated by the remarkable fact that not a single member of this regiment was known to have deserted to the enemy,” H.P. Smith wrote in his 1885 “History of Warren County.”

Contemplating life after the war was one way to bolster spirits.

Cunningham wrote about a conversation between two soldiers along the march route to James River.

One soldier said that if he survived the war, he hoped to travel to Boston to hear the pipe organ at Tremont Temple.

The other soldier said he just wanted to get back to work at the B.P. Burhans & Son tannery in Warrensburg.

“The sweetest music for me, just now, would be the Burhans tannery bell,” the second soldier said. “I suspect it’s ringing just about now for the midnight shift. I’d like darn well to hear its peaceful sweetness right now.”

Card playing was another diversion.

“Card playing is a constant addiction but seldom for ‘stakes,’ and while vehement words are used for cheap emphasis of excited conversation, strict violation of the … commandment (prohibiting profanity) is more and more relegated to the ‘necessity of mule drivers,’” Cunningham wrote.

Among those recruited was 19-year-old Stephen B. Little, son of the senator, who would be killed in combat.

The close geographical proximity of its members gave the unit a sense of camaraderie, wrote Cunningham, a lawyer from Essex who later was an executive of Glens Falls Insurance Co.

“The regiment had more of a family spirit than is usual in similar organizations,” Cunningham wrote. “It was very largely made up of young men, many mere boys, and this gave it life, elasticity and endurance.”

U.S. Rep. Orlando Kellogg, R-Elizabethtown, was known as “the Father of our Regiment” because he took a special interest in the unit.

“His thoughtful kindness to us during our three years’ service justified the affectionate title,” Cunningham wrote.

Civil War posts flourished in the region a century ago

A breeze shifts the flag placed at the gravesite for Allen D. Hubbell, Co. A. 118th Regiment, N.Y.V, at the Sunnyside Cemetery along Sunnyside Road in Queensbury on Friday. The tombstone is engraved "died at Washington, Feb. 28, 1863." Hubbell's name is also etched onto the side of the Civil War Monument in Glens Falls as a soldier who died from disease.

The eagle perched on top of the Civil War Monument in Glens Falls on Friday afternoon.

Cars pass by on a busy Glen Street near the Civil War Monument in Glens Falls on Friday afternoon.