GLENS FALLS — AngioDynamics is hoping to elevate Catheter Valley to the valley of hope of all pancreatic cancer patients.

The company has developed a treatment for stage 3 pancreatic cancer. Usually patients diagnosed with that cancer have a one-year life expectancy. With the NanoKnife, patients have lived for twice as long and some were cured, though that is rare.

“We want to be the hope” for those patients, President and CEO Jim Clemmer said Tuesday at EDC Warren County’s annual Economic Outlook breakfast in Glens Falls.

He cited one person who fully recovered from the cancer after his wife found a doctor in Florida who used the NanoKnife to kill the cancer cells.

“He lived. That’s why we’re here,” Clemmer said. “One day we hope people will look at this region as the place that meets this need.”

The company makes the NanoKnife at its Queensbury facility.

In November, the company turned its Albany building purple with lights for pancreatic cancer awareness.

“Maybe our building will always be purple if we get (FDA) approval to be the source of this unmet need,” Clemmer said.

AngioDynamics has been selling the NanoKnife for 10 years, but without FDA approval to use it to fight cancer. The FDA wanted a randomized trial to judge the effectiveness, if any, of the device.

But AngioDynamics officials argued that it would be unethical to tell people they had a few months to live and then ask them to join a study in which they had a 50% chance of getting the only treatment that might prolong their lives.

“We went back to the FDA, worked with the FDA in a collaborative way,” he said.

The FDA agreed to allow a study in which anyone who wanted to be treated with the NanoKnife could be treated, and their long-term health results would be compared to the life expectancy of those who do not get that treatment.

“They don’t usually bend on these things. To their credit, they did,” Clemmer said.

Those results will determine whether the treatment gets FDA approval.

But just having the study has helped.

“We could sell it (before) but not tell people how to use it. Kind of crazy, but that’s how government works,” Clemmer said. “So we’ve been selling it for 10 years and doctors can use it off-brand. But it’s a complex thing. We want to be able to train them.”

Early results, from before the study began, were encouraging.

Most pancreatic cancer patients have a tumor that can’t be surgically removed without destroying the pancreas. For those, life expectancy is 10 to 12 months with chemotherapy, according to Roswell Park Comprehensive Cancer Center. Patients who had the NanoKnife treatment at Roswell Park instead lived an average of 20 months, according to the center. The center also found that in eight cases, the cancer was completely eliminated by the NanoKnife, though that does not normally happen.

That means more jobs — although Clemmer did not have a number yet. The jobs will pay more because they involve more complex tasks.

AngioDynamics has also invested in training its employees for the newer products it is making.

“A couple years ago, we were making basic plastic catheters. So people have to grow with the company,” Clemmer said.

In addition to the NanoKnife, the company is now making Auryon, a laser system that breaks up calcified lesions in arteries, and Angio Vac, which pulls out blockages in veins.

As they have developed the Angio Vac, they listened to doctors and kept upgrading the device. This year it comes in two shapes with improved flexibility and navigation; next year’s device will also be smaller.

“We can pull out blockages that can’t be done with any other device,” Clemmer said.

He noted that the company is now competing in much larger markets than a few years ago, against much larger businesses.

“We’re going to use science, not size, to deliver care and compete,” he said.

AngioDynamics is manufacturing these promising devices:

NYC to pay unvaccinated $100 to get jab

NYC to pay unvaccinated $100 to get jab

NY to require state employees to get vaccines

NY to require state employees to get vaccines

QUEENSBURY — AngioDynamics is looking to spruce up its office space.

AngioDynamics has officially sold its building at 10 Glens Falls Technical Park to Medline Industries for $5.75 million.

Warren County has the most medical manufacturing diversity in the country 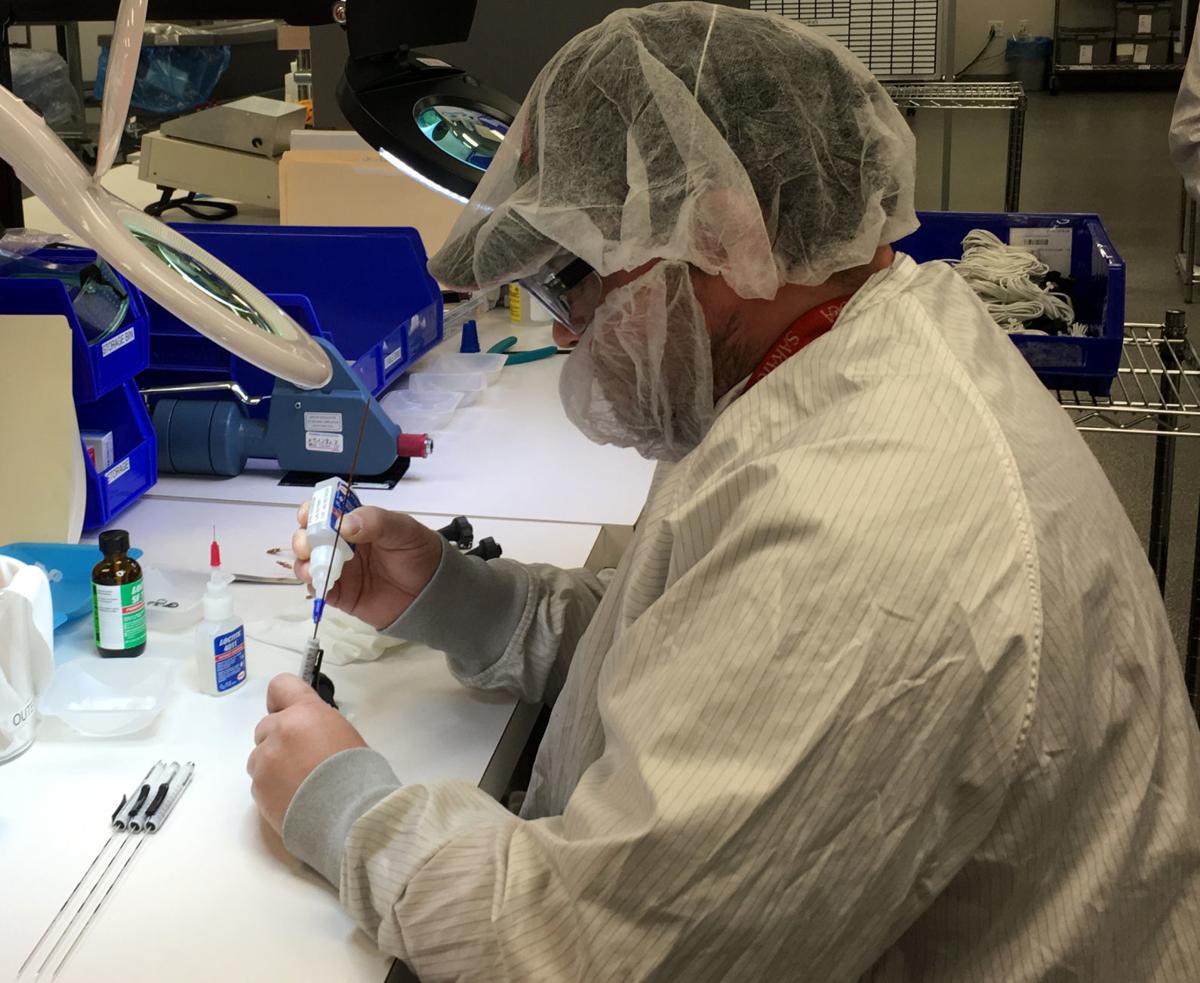 Chris Rock of Hudson Falls works in the clean room at AngioDynamics in Building 8 in Glens Falls, where he builds the NanoKnife. The device can possibly double the life expectancy of people with stage 3 pancreatic cancer and is now in clinical trials. 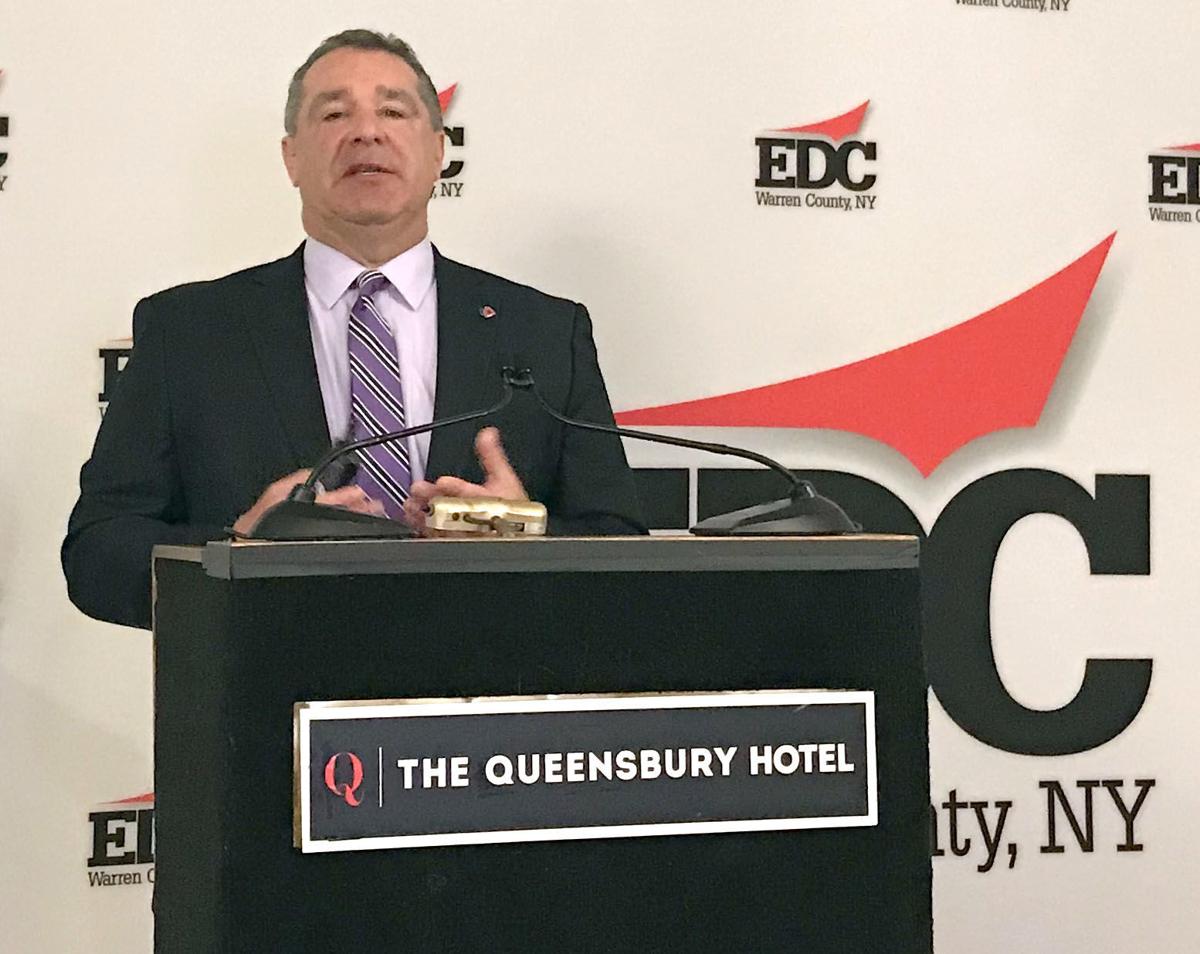 AngioDynamics President and CEO Jim Clemmer speaks at the recent 2020 Economic Outlook event at The Queensbury Hotel in Glens Falls.

AngioDynamics' NanoKnife is seen. The FDA has given approval to have the surgical device used for a clinical trial in the treatment of pancreatic cancer.