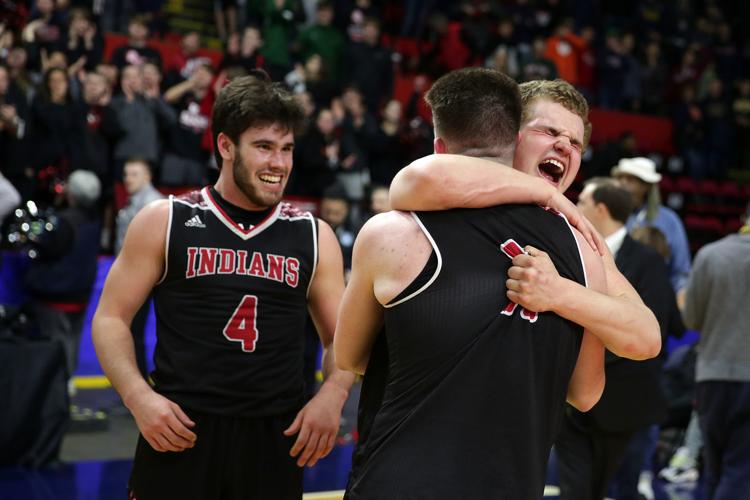 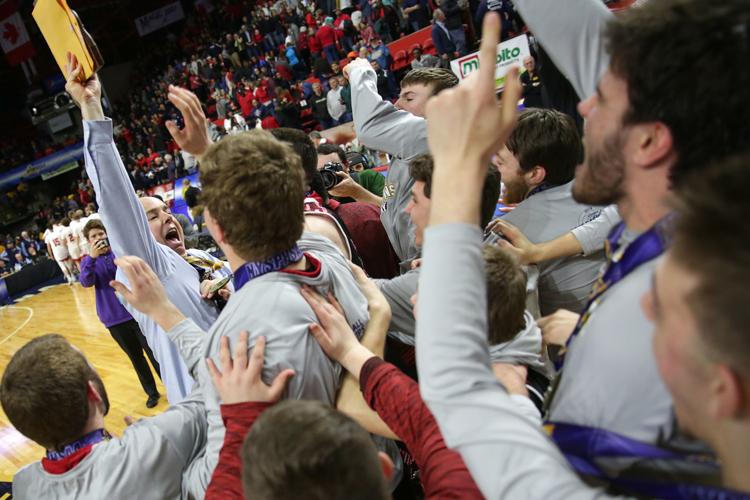 Glens Falls celebrates after the Class B final of the State Boys Basketball Tournament in Binghamton on March 16. The Indians season continues at 3 p.m. Saturday in the Federation Tournament of Champions against South Bronx Prep at Cool Insuring Arena. 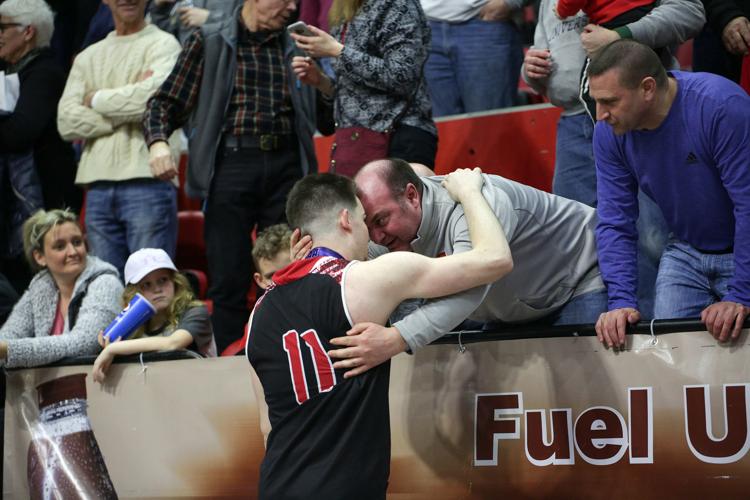 Glens Falls’ Joseph Girard III shares a moment with his father after the Class B final of the State Boys Basketball Tournament in Binghamton on Saturday.

Down four points to Lowville with 15 seconds left in overtime of the Class B public high school state championship last Saturday, Trent Girard looked to the sideline.

“I knew there was a chance we were not OK,” Rob Girard said. “But if he was going to look in my eyes and say that to me then, OK. Let’s go.”

Trent and the other Glens Falls players still held hope for what Joseph Girard III later called a “miracle” win.

Then a sequence some in Glens Falls have credited to divine intervention unfolded, and history changed forever.

While Glens Falls prepared for its Federation Tournament games this week, some Indians players sat down to relive the closing sequences of their state championship victory.

Below is an oral history of what Coach Girard, Joseph Girard III, Trent Girard, David Barclay and Kyle Vachon remember of those now storybook final moments.

Joseph Girard III: Naturally, you are going to be a little down on yourself considering the situation, but miracles can happen so I wanted to go down and get the best opportunity to get to the hoop.

Trent Girard: It didn’t feel over yet. Then Joseph got to the foul line and I figured he’d make two.

Rob Girard: After Joseph made both free throws, I told our guys we were still in this, only down two points. You just never know, they could miss some foul shots because we had to foul. They kept the door open and we were able to get their best shooter to miss two foul shots.

Girard III drove the lane and was fouled with five seconds to play, and a chance to tie the game. He made the first shot, but committed a lane violation on the second.

Trent Girard: I could not even watch the two foul shots. I was looking in the stands. Then on the second one, I was looking at my cousin, Quinn Girard, in the crowd and I saw his reaction, which wasn’t good. That’s when I saw they called the lane violation.

JG3’s free throw did not count. He was then subbed out with Glens Falls down one and with 5 seconds remaining.

Kyle Vachon: We talked about it in the huddle before the play that if anyone pushes or shoves you, just fall down.

Rob Girard: One of our bench guys, Zach Bren, actually mentioned how one of their guys repeatedly was extending his arm to get up. He told the guys that and it ended up changing the game. Zach’s attention to detail and focus really saved us.

Kyle Vachon: So the kid put his shoulder right into my chest and then pushed off and I just thought to myself, no way is this really happening. So I fell down and I heard the ref call a foul.

Joseph Girard III: When Kyle thought, oh no, Trent and I said, oh no, because we thought Kyle was going to the line.

Kyle Vachon: If I would’ve had to step to the line, I would have sunk both of them. Just kidding. I was saying, Lord Jesus, please do not send me to the line.

Because no time came off the clock, Girard III was not allowed to re-enter the game.

Joseph Girard III: Since I couldn’t go in, I started yelling at these guys to run “one,” our play. It is a cross screen for Brendan (Quirk).

Trent Girard: It wasn’t that bad. Plus it worked, didn’t it?

Trent Girard’s pass bounced inbounds, then off a Lowville defender, taking two seconds off the clock and allowing JG3 to check back in.

Kyle Vachon: Seeing Joseph come back in the game was a “Jesus, take the wheel” moment.

Trent Girard: Right when Joe turned the corner, I knew there was like a 95 percent chance it was over once I passed it to him.

Joseph Girard III: The reason I ran right for our student section is because they have supported us every step of the way.

This weekend, Glens Falls will be home away from home for basketball champions

BINGHAMTON — If this feels storybook or even destined, it’s because it just might be.

Trees and power lines knocked down by Ian

Trees and power lines knocked down by Ian

Glens Falls celebrates after the Class B final of the State Boys Basketball Tournament in Binghamton on March 16. The Indians season continues at 3 p.m. Saturday in the Federation Tournament of Champions against South Bronx Prep at Cool Insuring Arena.

Glens Falls’ Joseph Girard III shares a moment with his father after the Class B final of the State Boys Basketball Tournament in Binghamton on Saturday.